Unlike Nvidia, AMD has actually had a few more recent launches, they all fell right in the middle of the coin mining craze though that played havoc on GPU prices and availability. The RX580 launched last April and then Vega came in August to fill some of the gap in the high end. The RX580 was a refresh of the popular sweet spot card, the RX480 that launched back in 2016. They were both on the Polaris architecture and here we are again with a new Polaris based card in hand. AMD is officially introducing the RX590 today, just two weeks short of two and a half months after the original launch. AMD surprisingly decided to stick with the 500 series naming and just slip in a card hoping to fill in the gap between the RX580 and the GTX 1070.

Well as I mentioned before, the RX590 isn’t a new architecture, it is running on the same Polaris architecture that has been around for a few years now. It isn’t even a new Vega based card that was introduced after that. AMD took their original design and has just moved it from 14nm FinFET manufacturing to 12nm FinFET manufacturing. Normally this would make the die size smaller and allow for cheaper prices but they opted to actually keep the die size the same with the new process to allow for efficiency and performance improvements. Previously with the RX580 already pushing things higher than the RX480 it didn’t really look like there was any room left, but this new process has allowed AMD to bump the clock speeds up even higher. So at stock clock speeds, the RX580 had a boost clock of 1340 MHz and a base clock of 1257 MHz. Now the RX590 has a boost clock of 1545 MHz and a base clock of 1469. So the base clock is now higher than the RX580’s boost clock by 129 MHz.  This makes the 1545 MHz boost clock that AMD is calling stock a big jump over even the fastest of the aftermarket RX580’s.

Looking through the rest of the specifications that are listed below there really aren’t other big changes. You get the same 8GB of GDDR5 like the RX580, same 36 Compute Units, and same memory interface. The only other big change is the change in board power. Remember these are the stock recommended numbers so aftermarket cards could require more but the RX590 is now calling for 225 Watts where the RX580 was 185 Watts. 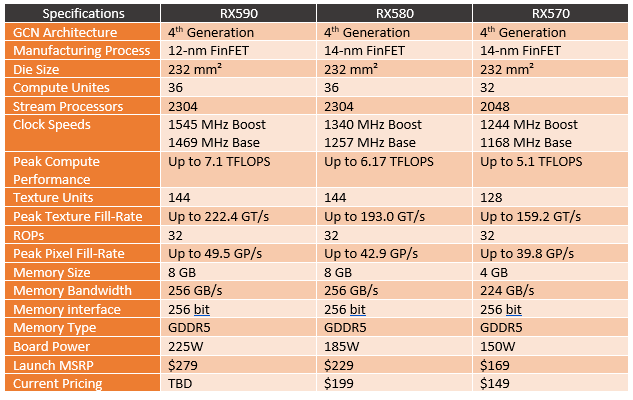 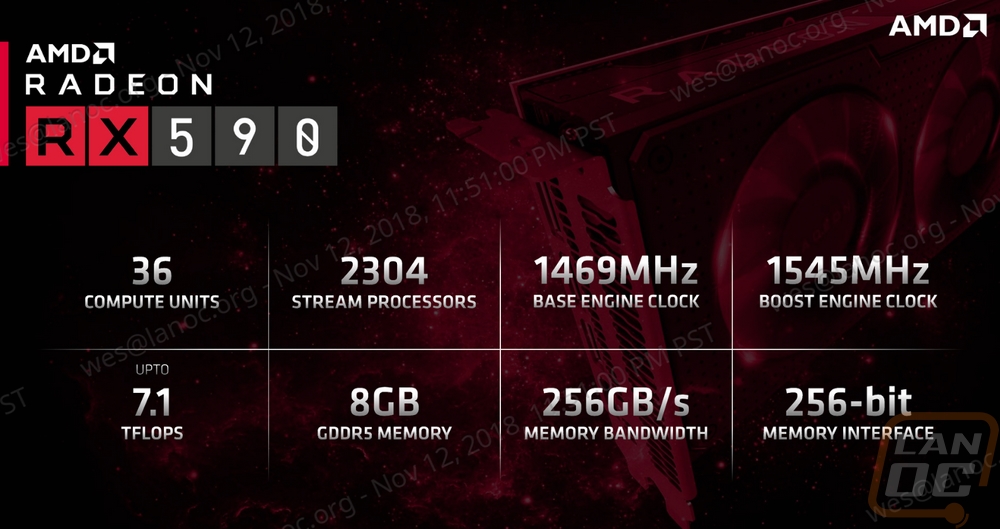 As for pricing the RX590 does have a higher MSRP as well, as I’m writing this before the cards are available to buy I will have to wait and see what the price range will be overall but AMD was clear to point out that they do expect some cards to be at the $279 MSRP. That said this is a big jump over the MSRP of the RX580 that was $229 and is currently selling for as low as $199 so I will have to look at performance numbers before deciding if that is a good price or not. I do however know that AMD specifically wanted to bring out a card that fit in the gap between the RX580/GTX1060 and the GTX 1070. The GTX 1070 can be found for $359 and I was able to find one Vega 56 for sale in that same price range. That does leave a big gap between that and the $199 for the RX580. The $279 price point does fit right in the middle of that. 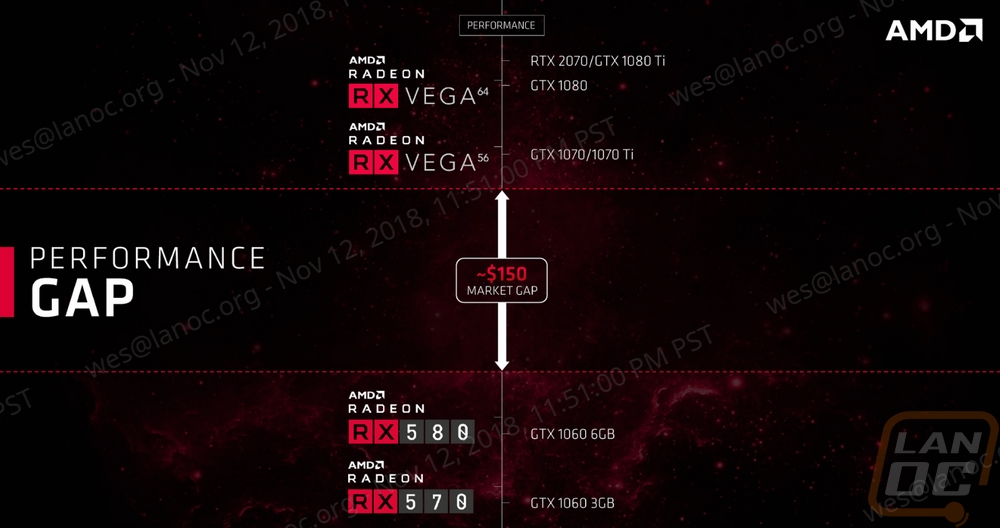 On the call leading up to this launch they were also talking about their research on how 1 in 3 games is spending $199-$399 on a GPU and 64% of gamers are still playing at 1080p. With both of those in mind, they brought out the RX590 to improve on the already good 1080p performance of the RX580 and to give another option in that optimum price point. 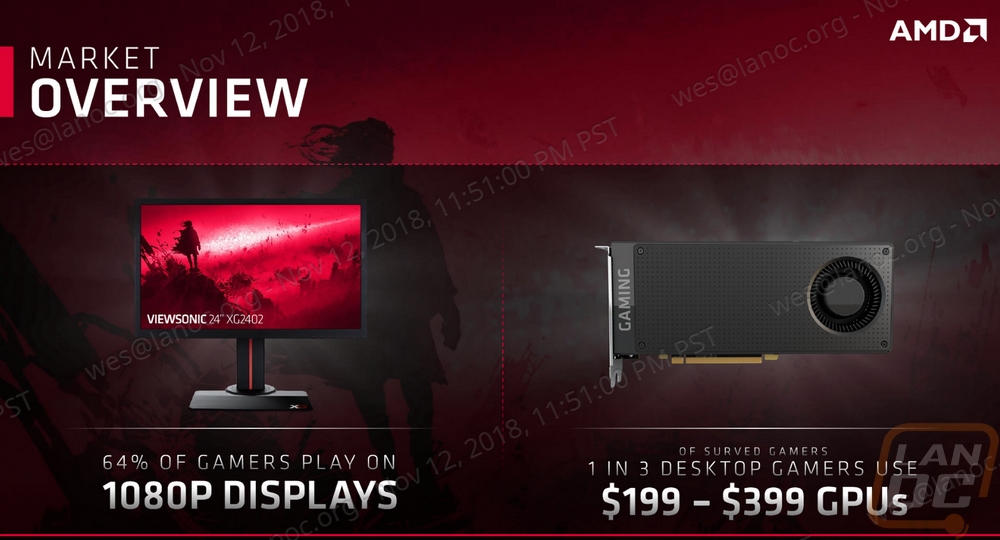 AMD was calling the RX590 a mix between high framerate AAA and esports gaming and they were showing off up and a 12% performance increase in their slides. 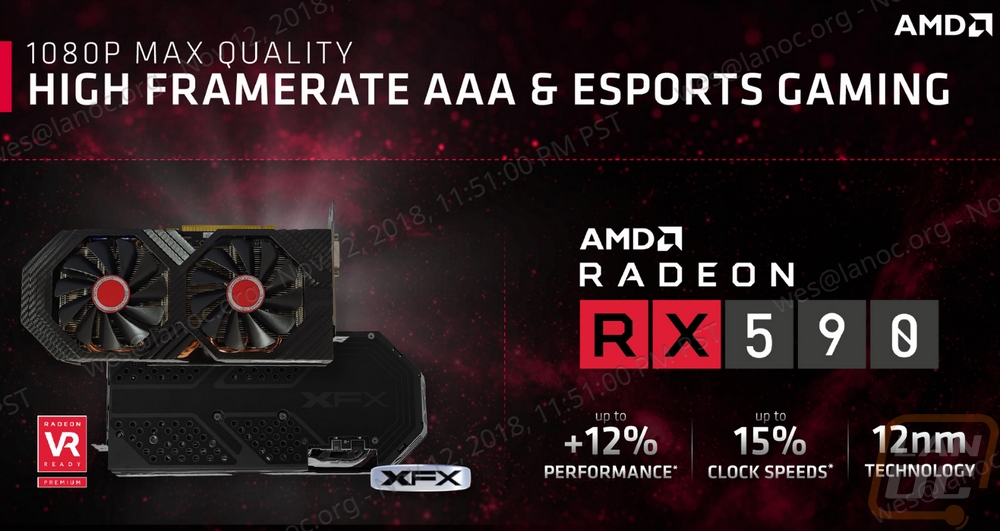 The other big push, and this wasn’t a big change from previous AMD launches, was to point out the value AMD is adding by having FreeSync over G-Sync. FreeSync monitor options are much cheaper and more readily available. Focusing on the 1440p and 1080 range that the RX590 can perform they showed off a few high refresh monitors available. 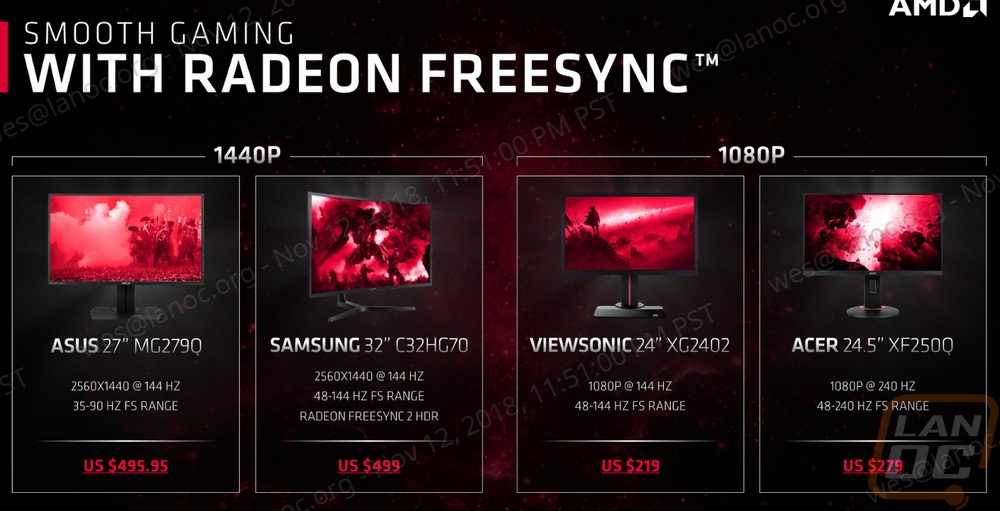 The other big announcement though was the RX590 actually comes with 3 free games from select retailers. You get a copy of Devil May Cry 5, The Division 2, and Resident Evil 2. All three haven’t come out yet so you are getting access to brand new games when they come out and each sells for $59.99, giving a bonus value of $179.97! Now not all of the games may be your thing, but talk about a great bonus on a $279 card, if you planned on buying all three it basically makes the card cost $99. 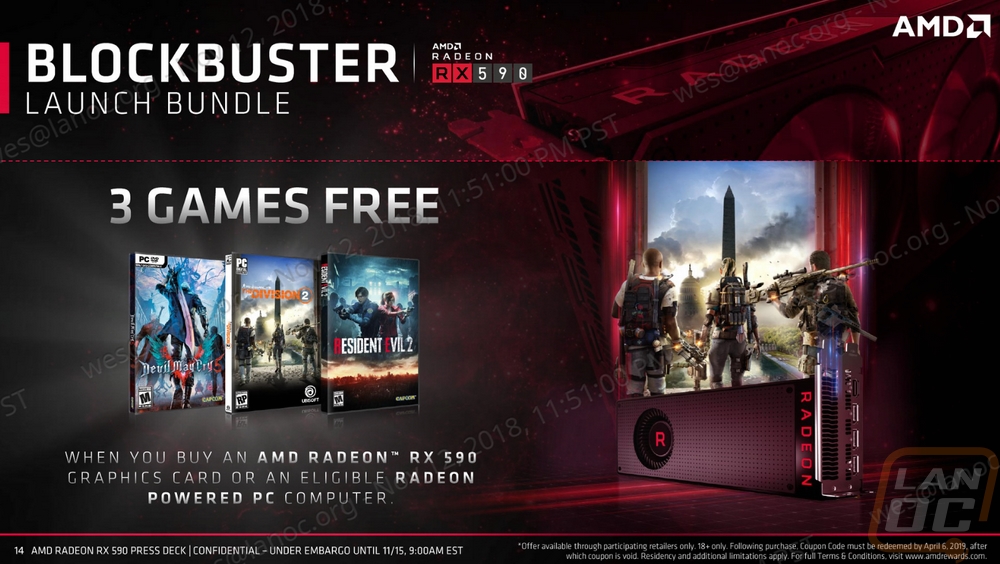 Here are the specifications for the XFX RX590 Fatboy that I will be testing today. You can see it does have a slight overclock over the reference clocks that AMD provided but beyond that it is similar.

We have 1056 guests and no members online