Last year with the RX580 launch I had the XFX GTS in the office and this was a similar card design to what we are seeing with the Fatboy. In fact, if you put them next to each other you wouldn’t really see any differences when it comes to the carbon fiber looking fan shroud. The Fatboy is a thicker card though, from what I can tell XFX has improved on the cooler design but stuck with the same fan shroud as the GTS. Ironically last year I based on the fake carbon fiber shroud mentioning it as questionable styling. That still applies here, for me the look is just too aggressive but I do think some people will like the look. XFX has avoided packing their card with RGB lighting and if they would drop the bright red dots on the middle of their fan blades the blacked out look might not bad so bad. 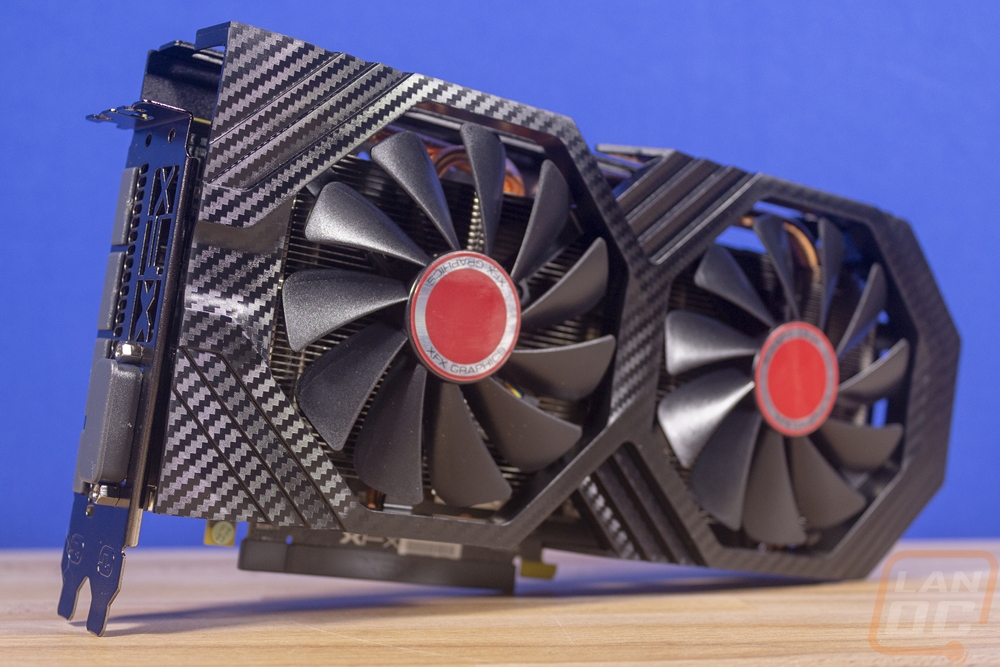 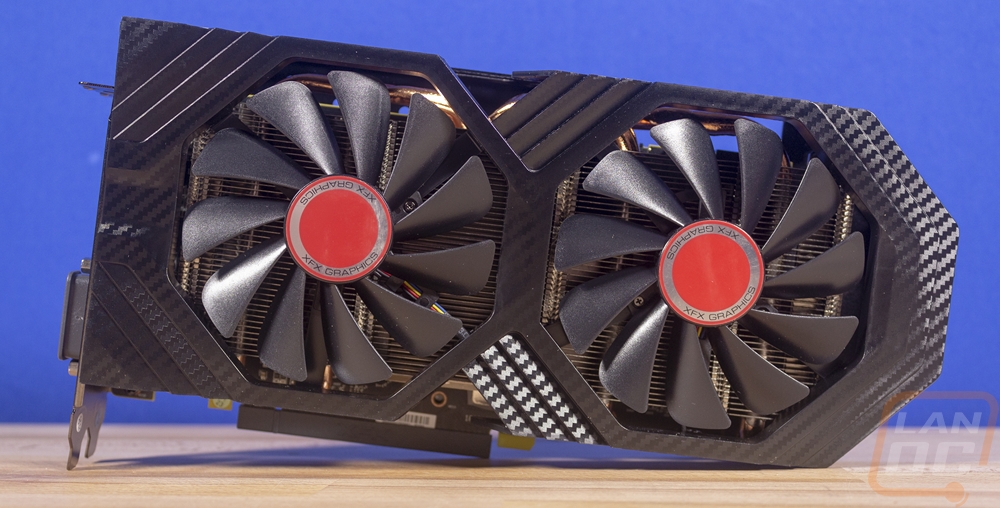 Around on the back, I really like the black backplate, the gloss black used for accents isn’t too bad as well though I would prefer a little less. The backplate is a thin sheet metal not a thick machined plate like some cards have so XFX had to put holes in it for airflow because this backplate doesn’t function as a heatsink. Looking up near the top edge of the card where you can see the PCI bracket it really gives you an idea of the size of this card. It is much taller than any reference or close to stock card on the market. That means you need to make sure you have the clearance in your case to fit this card before picking it up, most full-sized cases will support it but when you start to get into smaller mATX and ITX cases the gap between the GPU and the side panel or top of the case is a lot tighter. 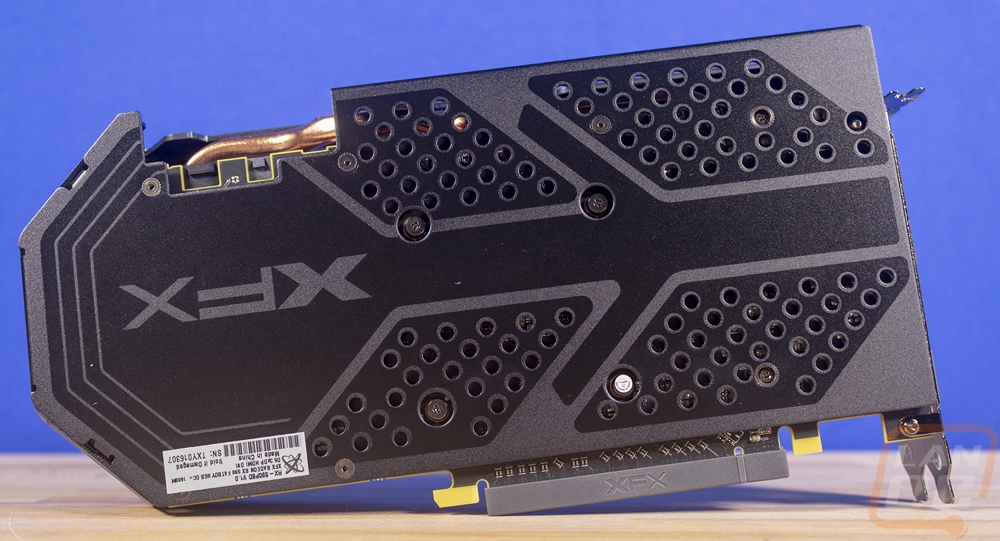 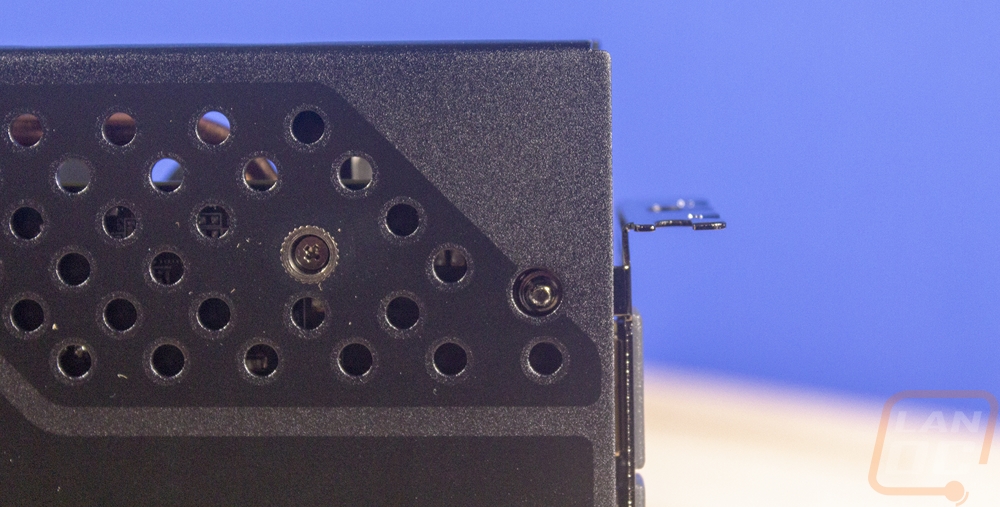 Looking around the edges of the Fatboy we can get a better look at XFX’s cooling solution. For starters, all three sides are mostly open for airflow to flow out from the down facing fans. The heatsink design itself runs four heatpipes (two thicker and two thinner) from direct contact on the GPU out across the heatsink. The two thicker popes are on the longer side of the heatsink. The top edge has the XFX logo on the shroud and the new Fatboy design that sticks up farther also now shows the top heatpipes a lot more where before it was tight up against the backplate. It’s the end design that I’m still not a fan of though. I like the idea of having the backplate wrap around like XFX has done, but the fan shroud sticks out farther from the fan than it should and because of that they have made the card longer with nothing filling that space at all.

So as I mentioned the fan shroud design and backplate design is the same as on the RX580, the Fatboy design is all about the thicker heatsink that causes the card to be a two and a half slot card. Using the picture from our RX580 GTS review and a picture of the Fatboy you can see just how much meat they have added to the heatsink. You can also see how this opened up the gap around all of the edges as well. 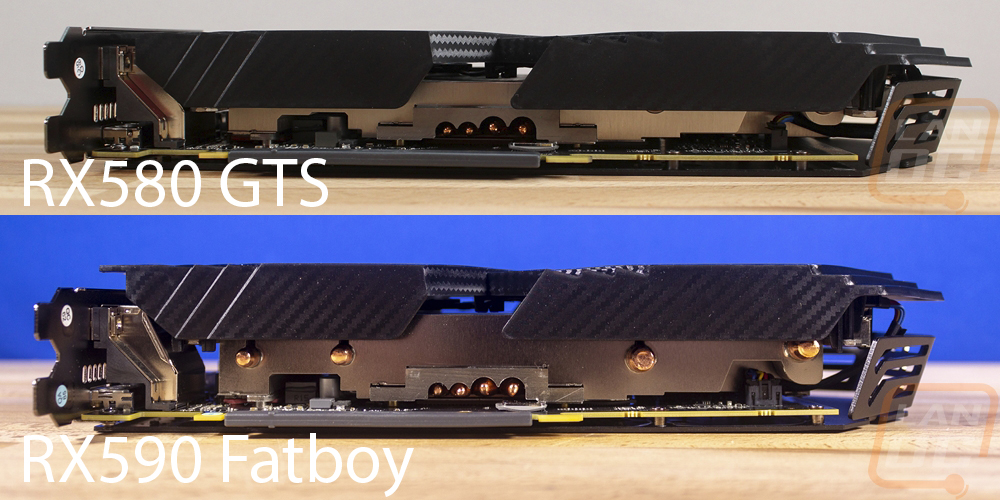 For power, the RX590 Fatboy requires both an 8-pin and 6-pin for power. For comparison XFX only needed a single 8-pin for their heavily overclocked RX580 GTS. The power connections are flipped around with the clips on the PCB side to save room for the heatsink and that fat heatpipe that runs right next to the connections. XFX had to notch the PCB in two spots and the backplate also had to be notched as well. The RX580 GTS had a notch as well but with the second plug added XFX had to expand that. If you look closely in this area you can also see the small switch next to the power connections as well. XFX runs these on their cards to give you two BIOS options. XFX used to do a gaming focused and a mining-focused BIOS, but with mining dying off a little they went with a normal and a quiet mode for the RX590. It allows you a safe way to reflash your BIOS with a backup if something goes wrong. 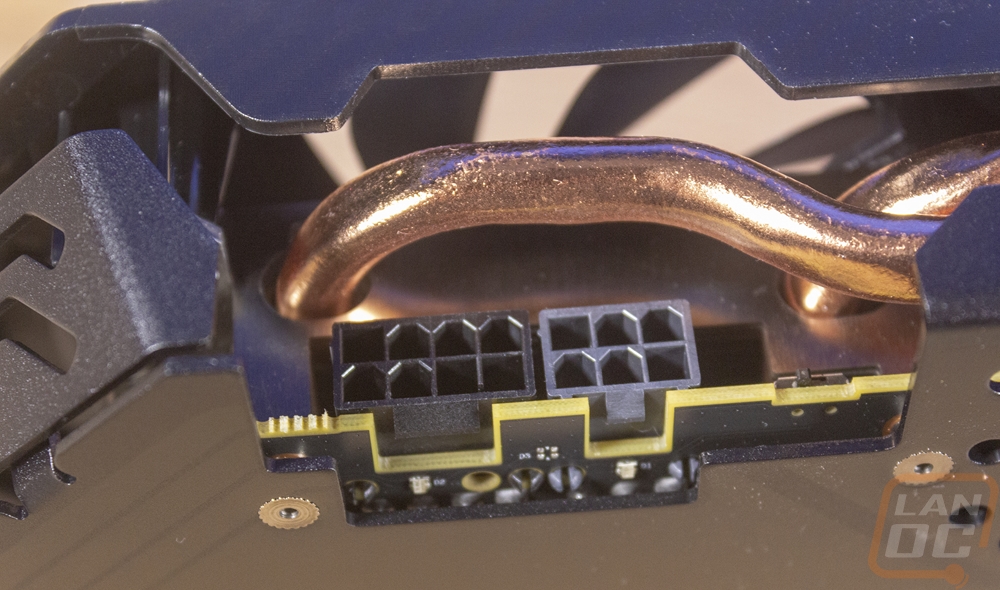 On the back PCI bracket, there is a little ventilation built into the bracket with the XFX logo in one and the line of cutouts right above the bottom row of connections. For connections, you get one DVI plug up on the top and one HDMI below it. Then the other three are all DisplayPort. I should point out the plugs that XFX uses to keep dust out of the connections are a pain to get out and the DVI cover was actually thicker than normal and had to be removed to install the card.