My last batch of testing is focused on the stuff that a lot of people don’t consider like cooling performance, noise levels, and power usage. Oddly enough all of these also are the main areas where different aftermarket card brands can differentiate themselves. Cooling and noise is mostly about the performance of their custom coolers with overclock settings playing a role. Then power usage is all about the overclock settings. Going into this we know the thermal TDP of the stock RX590 is 225 watts and the XFX RX590 Fatboy is clocked at a boost clock of 1600MHz where the stock boost clock is 1545 MHz so it is faster and should put out more heat and potentially pull more power.

My first tests were to look at power usage. I ran two tests, one using 3DMark Fire Strike on the performance setting, specifically in the Combined test run. The second was using AIDA64 with its stress test to put a load on the GPU. The combined 3Dmark is close to what I saw in most of my actual in game testing as it isn’t as stressful on the GPU but it also puts some load on the CPU. The AIDA64 test is GPU only with everything else idling. I read wattage using a Kill-A-Watt hooked up to the testbench, so these results show the total system draw, not just the GPU. In 3DMark the RX590 pulled 389 watts, this was 29 watts more than the RX580 did on the same test and this was also higher than the GTX 1080 Founders Edition pulled as well and was close to the new RTX 2070. In the AIDA64 stress test the wattage dropped down to 326 watts and this time the RX580 was a lot closer at 328, both still well above most of the cards tested. As it turns out, even with the improved 12nm FinFET process you pull more power the more you crank up the older Polaris architecture.

Next, I took a look at the noise output of the two large fans that XFX has on their cooler. To test this I tested the decibel level at both 100% and 50% fan speeds. Idle results are too low to be accurate and I would prefer to show in game or under load results but the fan speeds there swing. So sticking with these two speeds we get an idea of overall noise range of a card, the cooling results later will help us understand if the card will be up in the 50 to 100% range. So the Fatboy’s fan run at 3199 RPM at full speed which is on the mid to lower range of the cards tested, but the decibel readings I ended up with were up on the higher side when the fans were turned up. From what I could see these are about the same as the fans on the RX580 GTS only running at a lower RPM so I have to wonder if the new thicker heatsink had to do with the higher noise levels. At 50% fan speed things weren’t too bad, but I wouldn’t want to run this at or near 100% fan speed too often. 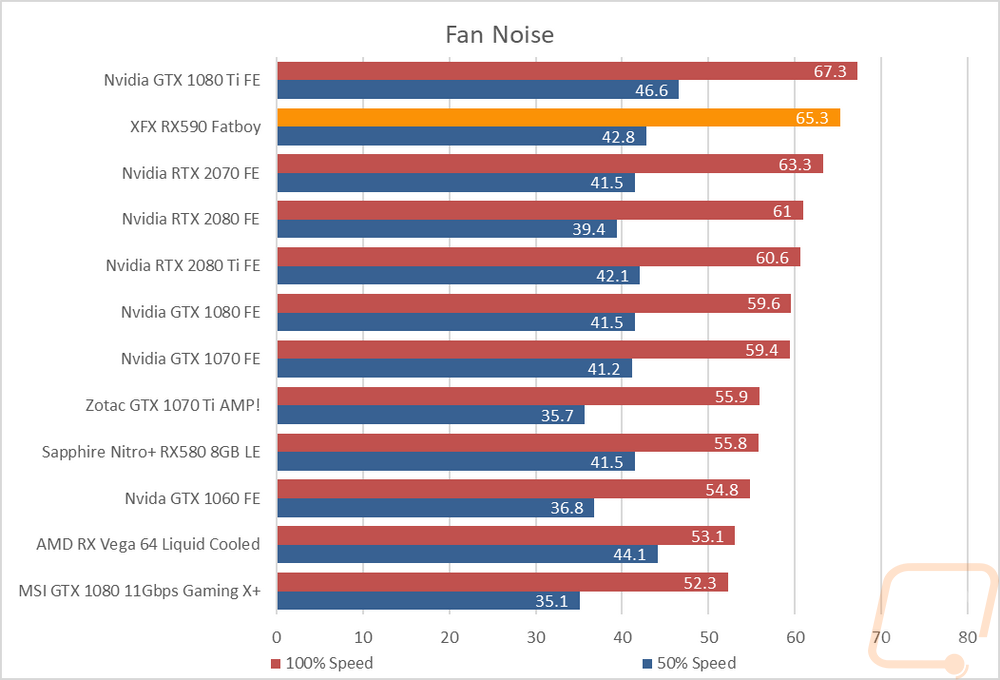 My last tests were focused on the temperatures. Here I went back to the AIDA64 Stress Test that does a good job of loading up the GPU and ran two tests. My first test was with the stock fan profile to get a look at out of the box performance. The second was done the same way, only with the fans turned up to 100% fan speed. I did this to get a look at the total cooling capacity of the cooler that XFX included. So at stock speeds, XFX seemed to have the fan profile set to let the card run at 79 degrees under load. This was high up on my charts, similar to what reference and founders edition cards do. Cranking the fan speed up through the numbers dropped down closer to the middle of our charts at 59 degrees. Considering the higher power usage and clock speeds of the RX590, this wasn’t too bad to be two degrees from the good performing RX580 Sapphire card. The overall drop was 29.1% with the fans turned up. The stock profile number was a little concerning though, I think with this card you may have to run a custom profile to find the balance to get that down a little without forcing those fans to get noisy.

We have 1438 guests and one member online