So just over 3 weeks ago both the RTX 2080 Ti and RTX 2080 were unveiled. You can find my reviews of the RTX 2080 Ti and RTX 2080 at those links. While both were extremely fast, they were also expensive and a lot of the main features weren’t really out yet. With those at the top of Nvidia’s product stack that left a lot of people wondering what to do for builds that aren’t as expensive as a used car. Some people just decided to go with last generation cards, but today the RTX 1070 is finally available and with a $499 starting point it is at least in reach of a lot more people. But before you run out and buy one, let’s take a look at how they perform. With the RTX 2070 Founders Edition in hand, I’m also curious to see how different it is than the two other RTX cards so I will take a quick look at that as well.

By now you have most likely heard about the new RTX 2080 and RTX 2080 Ti, those were the first two GPUs launched from the new Turing microarchitecture. I’m not going to dive back into all of that, I would recommend checking out either of our RTX 2080 or RTX 2080 Ti articles where I get into that. The main area I wanted to look at is what sets the RTX 2070 apart from the two other RTX cards and how it compares to both the GTX 1070 and GTX1080. To do that I put together a specification listing below that breaks down all of the key specifications as well as stuff like pricing now and at the original launch.

The two GTX cards don’t have the Tensor Cores that help a lot with AI or the RT cores for ray tracing. These are still where the new RTX cards should innovate but in one of those chicken or the egg situations, the cards had to come out for game developers to start focusing on both of those areas. The RTX 2070 does have a lower number of both when compared to the other RTX cards. You will notice in the specifications that I have split up the Tensor FLOPS performance numbers, this is because I am reviewing the RTX 2070 Founders Edition today, but the stock settings for the RTX 2070 have a slightly lower clock speed so I wanted to make sure to include both. The stock 2070 boost clock is 1620MHz where the Founders Edition has a 1710MHz boost clock. They share the same base clock though. The other RTX cards did the same thing. Now the RTX 2070 clock speeds do some in lower than the RTX 2080 but higher than the 2080 Ti. The boost clocks are right in line with the original GTX 1070 but with a lower base clock.

The RTX 2070 has the same 14 Gbps GDDR6 memory as the other RTX cards and the same 256-bit memory bus width as the RTX 2080. You get the same 8 GB of VRAM as well that is shared across the GTX 1070, GTX 1080, and RTX 2080. The TDP is up from the GTX 1070 though with the stock sitting at 175W and the Founders Edition at 185W. This is actually more in line with the GTX 1080. As for pricing, the RTX 2070 stock cards have an MSRP of $499 and the Founders Edition is $599. Writing this before the launch I don’t have any way to confirm that those cards will be available, but I do know that most of the companies do have models to fit in that $499 stock slot. As for the GTX 1070 and the GTX 1080. Well, pricing has been crazy over the last few years. The GTX 1070 launched at $379 and when I checked today you can find one or two cards at that price point with the rest higher. The GTX 1080, on the other hand, launched at $699 and its prices have gone down a lot more. When the other RTX cards launched you could find one for $469 but double checking pricing now $489 seems to be the lowest pricing for new cards. So that puts the RTX 2070 stock cards right in line with the GTX 1080. It will be interesting to see how they compare for performance. Of course, the RTX 2070 should also offer improvements later with its Tensor and RT Cores. 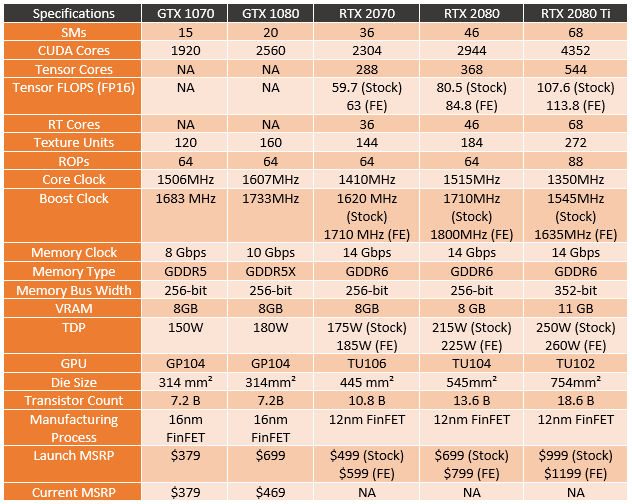