It’s been an interesting month with Nvidia having released their first RTX cards. The response for the RTX launch was about what you would expect given the pricing. I wouldn’t call it a welcomed response, but I have been seeing a lot of builds pop up with the cards, proving that while out of range for a lot of people there is still a market for the ultra high end. The RTX 2070 launch was what I had my eye on though. I knew it wouldn’t be in the sweet spot that the RX580 and GTX 1060 have been in for price and performance, but I was curious what kind of performance we could expect from a Turing based GPU while still trying to cap the price down into a range that more people might be able to afford. What we ended up with for this launch are stock cards that come in at a $499 price point and then overclocked cards including an overclocked Founders Edition card that are priced a little higher. I didn’t have a $499 prices stock card to test for launch so that left me testing the RTX 2070 Founders Edition but I want to keep in mind both options.

For things that are Founders Edition specific, I wanted to touch on the fact that this card, like all Founders Edition cards, is solid. The all-metal shroud design puts these cards in a class of their own when it comes to overall construction and a quality feel. Don’t get me wrong a lot of the aftermarket cards are also very nice, but none of them feel like you could beat a man to deal with them then put them in your PC and game. I really think you could do that with the RTX 2070 Founders Edition, or any of the Founders Edition cards. I’m not sure how many people are really looking for that as a requirement in their PC hardware, but the option is there. Beyond that the RTX 2070 Founders Edition has the same styling that the other RTX cards have. I personally like the look but it is very subjective. I do think swapping the black and silver might better match more builds though, using silver as an accent, not as the main color. I love the look of the top mounted RTX branding. Being clear when turned off looks awesome. I do think that Nvidia should have given the option to turn the lighting to other colors though. The green looks good, but it doesn’t really go with a lot of today's popular colors, not to mention its almost 2019, everything has RGB! 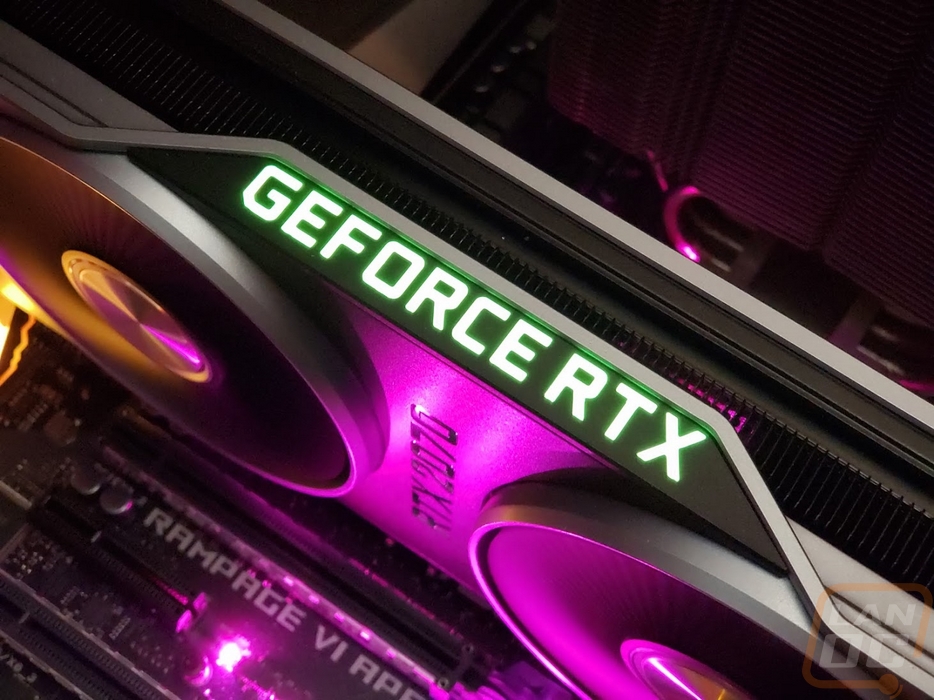 As for performance, I can say for sure that when running settings cranked up on today's newest games the RTX 2070 seems to fit best for people looking to run at 1440p. 4k performance was more than playable at those settings, but as a whole more of the games tested came in below 60 FPS than above. At 1440p, on the other hand, you shouldn’t have to worry about turning detail down at all. With 1080p, on the other hand, the RTX 2070 ended up being overpowered for normal 1080p60 but not powerful enough for high refresh rates. When compared to other cards the RTX 2070 came in mostly above the overclocked GTX 1080 running 11Gbps memory and well above our GTX 1080 Founders Edition card. The GTX 1080 Ti is still faster and of course, both of the RTX 2080 models are faster. Cooling performance was good as well from the Founders Edition cooler, even with it being shorter than the other RTX cards.

The main downside to the RTX 2070 is the same issue I had with both the RTX 2080 and the RTX 2080 Ti, the biggest feature these cards have are the Tensor cores and RT Cores that are used for ray tracing and with AI and DLSS and none of that is really available yet. Nvidia does have 25 games with DLSS coming including popular games like Ark, PUBG, and Final Fantasy XV. As for ray tracing, there are 11 games upcoming like Battlefield V, Shadow of the Tomb Raider, and Assetto Corsa Competizione that I’m excited for. But until some of those games are out people don’t really know what to expect from those key features leaving a portion of the GPU unused.

As always, unless it is a halo product sitting at the top of the product lineup the price is really what determines if this is a good pickup. Nvidia was careful to make sure they had $499 prices cards available and assuming that you can find those the RTX 2070 does make for an interesting option. With the RTX 2070 basically matching the current pricing for a new GTX 1080 but beating in in performance it does make it a good option to go with at that price point. That doesn’t even include that you will be able to take advantage of ray tracing and DLSS and other AI options with the Tensor and RT cores in the future (hopefully sooner rather than later lol). 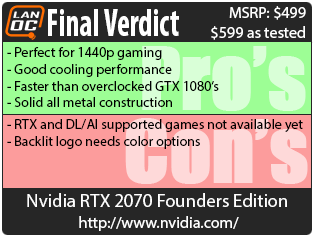 You might call him obsessed or just a hardcore geek. Wes's obsession with gaming hardware and gadgets isn't anything new, he could be found taking things apart even as a child. When not poking around in PC's he can be found playing League of Legends, Awesomenauts, or Civilization 5 or watching a wide variety of TV shows and Movies. A car guy at heart, the same things that draw him into tweaking cars apply when building good looking fast computers. If you are interested in writing for Wes here at LanOC you can reach out to him directly using our contact form.
Discuss this article
Log in to comment
Posts in discussion: Nvidia RTX 2070 Founders Edition