So when I first pulled out the RTX 270 I was not surprised to find out that it looks just like the other 2 RTX cards. At least at first glance. It has the same 2 fan design that was introduced with the RTX cards, it has the same middle black area with the branding and the silver trim around the sides. I know the new look was a little polarizing and not everyone likes it, but I still think the Founders Edition cards are up there with a few of the aftermarket cards for aesthetics so I was happy to see that the same design carried down to the RTX 2070. After holding the card for a minute I notice that it is a little bit smaller in there some other differences between the cards as well I wanted to go to touch on. 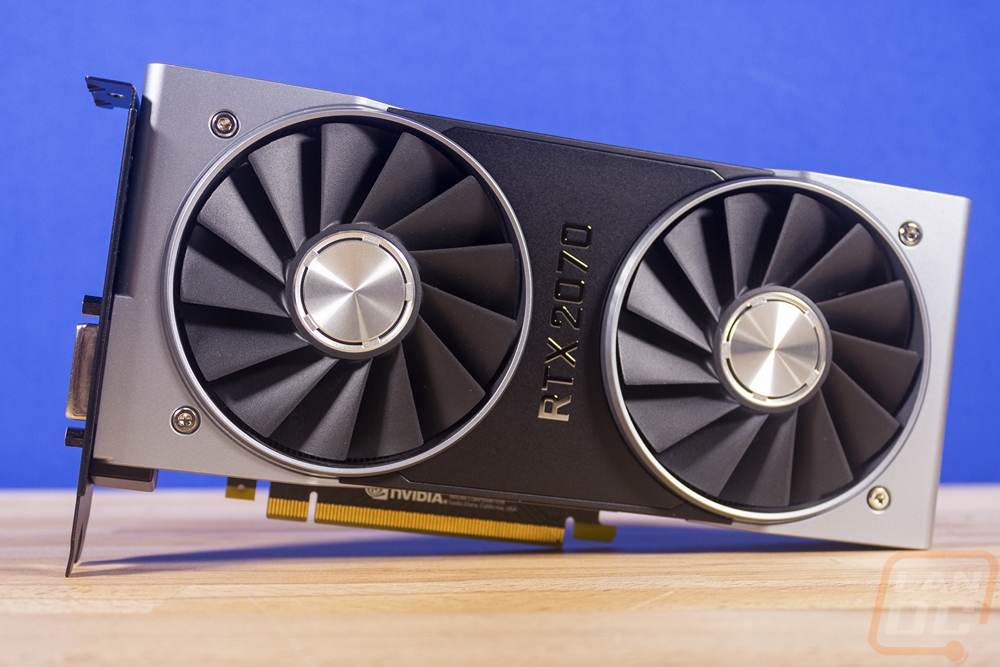 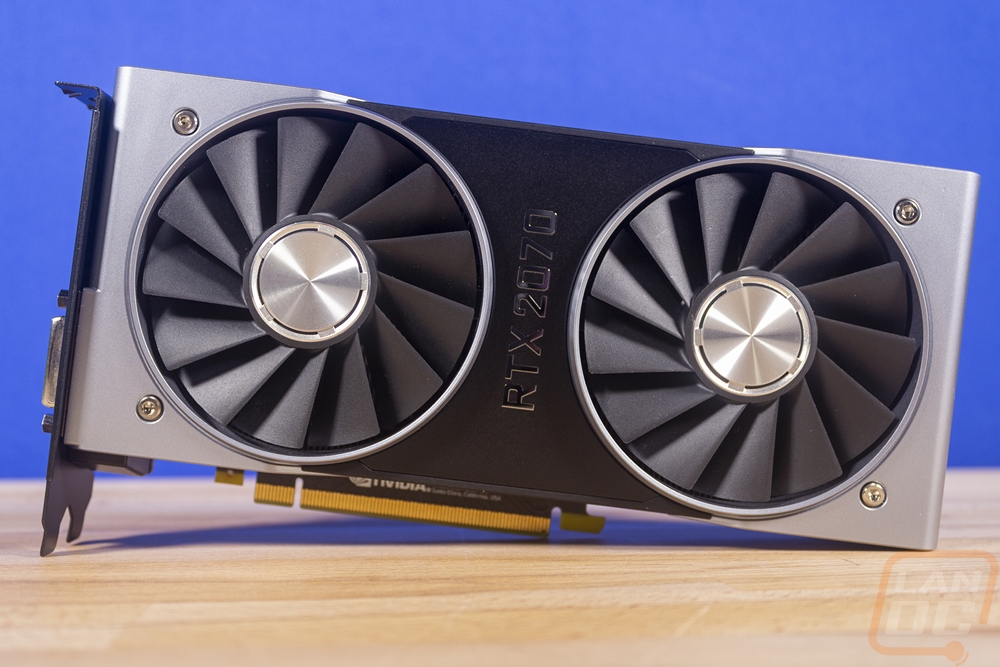 The back of the RTX 270 has the same silverback late design as well. That includes the lines that run horizontally across the card splitting apart for the branding in the middle. Having the branding of the card on the back play still huge to me because this is really what most people see when the card is installed in most traditional cases. The branding has a that Chrome finish like in other locations and just says RTX 2070. The backplate also wraps around the ends of the card just like on the other RTX models. 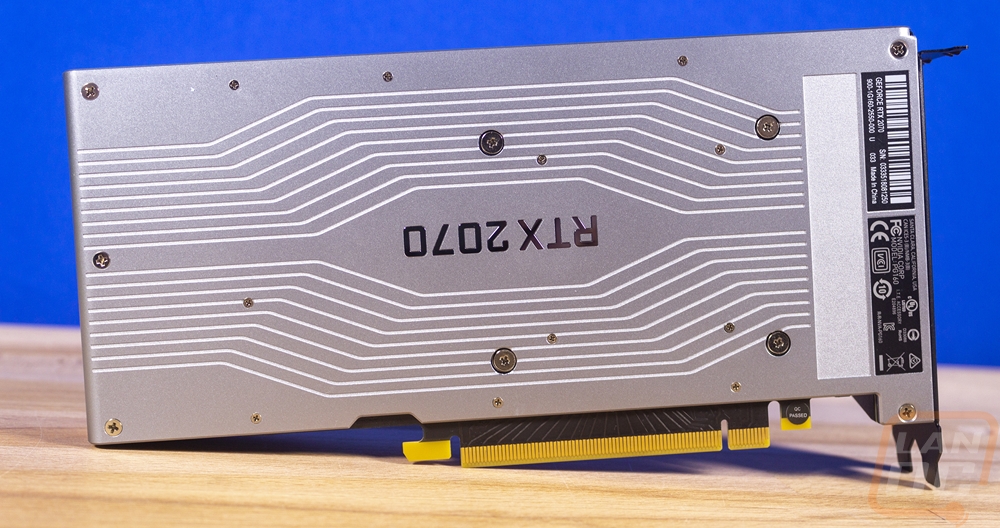 For the PC I bracket we still have the same black finish that I love with the 2080 models you also have the Nvidia logo on there for branding as well. Up the big change here is that there's actually a DVI port where the 2080 models did not have DVI port you had to use the display port to DVI adapter that they included. In addition to the DVI port, you still do get two DisplayPort 1.4a connections, one HDMI, and that unique type C connection. That Type-C supports VirtualLink, a VR specific protocol that outputs the display as well as handles the USB and power needed to power a VR headset hub. Basically, in the past, you had to hook up a display connection (DP or HDMI), USB for data, and then a DC power connection. Now that same hub can just plug right into your video card. In the future, the headset itself may be able to plug right in, just like a monitor does, because of this.

Like the other RTX cards, when you look around the edges of the RTX 2070, you can get a good look at the cooler design. The two downward facing fans blow air through the heatsink that runs the length of the card then down against the PCB. That air then vents up through the top of the card and down out the bottom near the motherboard. This was the big change from the previous generations of cards where Nvidia's Founders Edition or reference cards all used a blower cooler that pushes air across the card then out the back. The top and bottom views also give a good look at how the all metal fan shroud wraps around the end of the card combined with the backplate to make those rounded corners. If you look close at the bottom view you can also see that the PCB on the 2070 is actually shorter than the shroud makes you think. This gives me hope that we will be able to see RTX 2070 cards with ITX support in the near future.

The end of the RTX 2070 show a big change, the power connection isn’t facing up like on the 2080 models, it faces out the end of the card. This reminds me a lot of the GTX 1060 because it also had a shorter PCB with the connection still at the end of the card, but that one did still face up. The end also has two screw holes where you can attach a card support if needed, most cases don’t have them, but they are great for preventing GPU sag. The other thing to note here is that for power the RTX 2080 has an 8-pin power connection. The RTX 2070 has a TDP of 175 for the stock version and the Founders Edition card here has a 185 TDP so the 8-pin is needed. PCI can handle up to 75 watts and a 6-pin supports up to 75 as well. The 8-pin isn’t really being pushed too hard with 110 watts of an 8-pins 150-watt cap so there is a little headroom there if needed.

I touched on it before, but here is a closer look at the new downward blowing fans. They still have the same metal center cap from the previous generations. There is a silver ring around both fans that is broken up by the black in the middle of the card with the RTX 270 branding on it. The silver around the fans and on the ends of the card do join together around on the top of the card where they slide up around the GeForce RTX branding up on top. This logo looks like it has that same chrome finish as the front of the card but this is actually backlit. The clear logo looks really good without the lights on and doesn’t have that green finish on the white rubber-like base past GTX cards had. Nvidia relies on RGB lighting behind the logo to get that signature green look. I would still really prefer this to be the default setting with the option to change the lighting to match your build though. 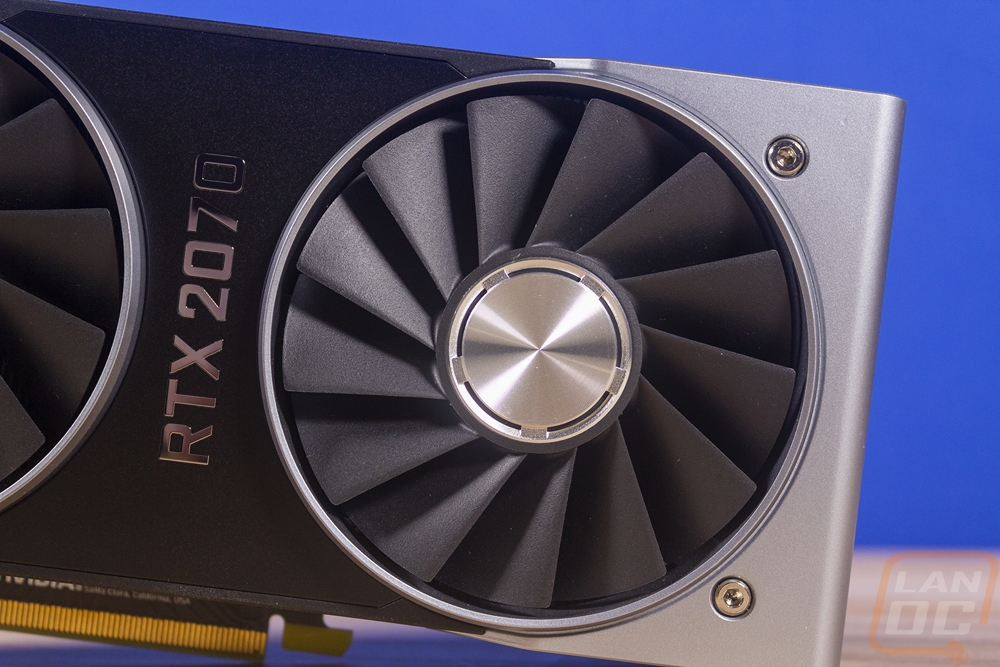 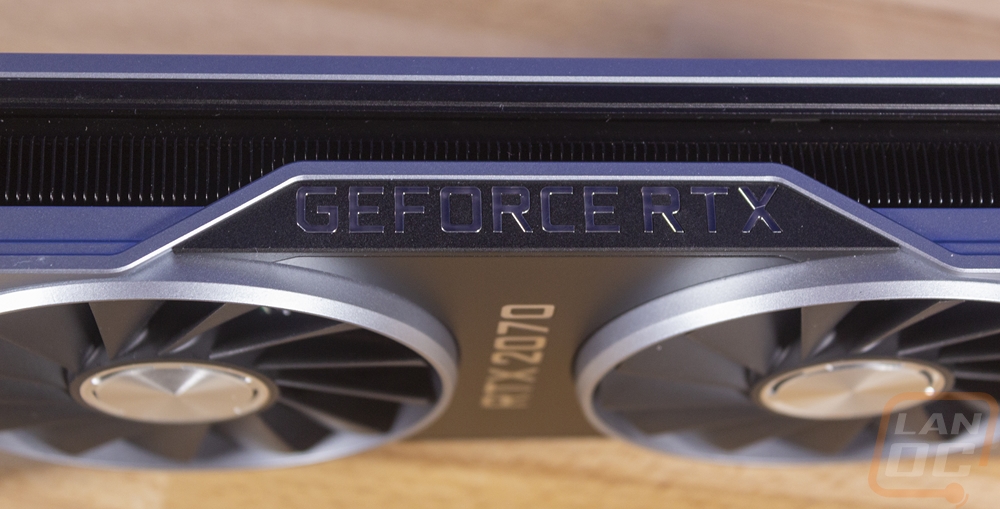 So as I mentioned the RTX 2070 was noticeably shorter than the RTX 2080 models. Well, I couldn’t just leave it at that right? I grabbed our RTX 2080 for comparison and when you get the cards next to each other you can see a few details have changed. The 2070 is much shorter for starters. But to make up for that shortness most of the middle of the card has been cut out. There is a little taken from between the outer edge of the fans and the ends of the card, but the fans are now right next to each other with just enough room for the RTX 2070 logo. Also up around the backlit logo on top, you can see that the trip around that is much thinner as well. The 2080 cards had a thick ring that matched the older GTX cards where the 2070 has just a thin line.

We have 1162 guests and no members online