So now that our testing is finished up, I just wanted to recap a few of the things I ran into. I know a lot of you only check out this section ? but be sure to flip through some of the other pages as well for more details on these. Starting with a few of the good things. Like the RX580 designs from XFX, the XFX RX590 has a solid cooling design that they improved on even more for this new card. The whole reason for the Fatboy name, that I’m really curious how people will react too is the additional thickness their new card has. The whole design other than the heatsink thickness is actually very similar to their previous cards. That includes the card having a backplate and the fan shroud design that I’m personally not a big fan of. I could actually talk a LOT about the shroud design but the main issue I have with it is the usage of that fake carbon fiber look, especially when combined with the red stickers on the fans when XFX could have a nice blacked out design without those. The shroud also forces the card to be far to long for no reason, not even using the space for a longer heatsink. With this still being pre-launch ,I haven’t seen any other XFX RX590 designs, but I hope they have a second option with their simpler shroud design available as well. Overall it is thin and feels cheap, a drastic change from the nicer XFX designs of the 7000 series and 200 series cards that I loved. That said, from what I have seen no one really went out of the way to make an all new design for the RX590’s beyond cooling improvements like what XFX did.

Thankfully the cards performance makes up for all of that, at least in cooling performance thanks to the thicker heatsink, noise on the other hand was up there at high fan speeds. This allowed XFX to overclock the RX590 up to 1600 MHz to improve on the gaming performance even more. Speaking of that, the 1080p performance is just about all you could ask for and on the off chance you want to play at 1440p from time to time, it is capable of that to a lesser extent. It does fit exactly where AMD promised in that it will get you high refresh rate performance for the “esport” titles and Triple-A games are all going to play at high settings in the 60 FPS range at 1080p. The downside to the overclock both from XFX and from AMD is the power usage of this card is up even higher, even with the smaller manufacturing process.

The big question both for the RX590 as a whole and for XFX’s RX590 Fatboy is how does the pricing work out compared to the performance. Well for starters the AMD was successful at having cards launch at their MSRP, this overclocked XFX model should be at $279.99. Now performance per dollar? Well at 1080p and 1440p I saw a performance increase of 5-8% in a majority of my tests, I know AMD mentioned seeing up to 15% in some tests but that 5-8% range seems to be more realistic. With new test results long after the launch of the GTX 1060 and the RX580 the clear hierarchy was the GTX 1070> RX590>RX580>GTX 1060 with the GTX 1070 still well ahead. As for pricing, currently you can find RX580 8GB cards for as low as $199 so the jump up to $279 is a 40% increase. So the RX580 is still the price per performance king at 1080p and anywhere near this price range.

The RX590 does have an ace in the hole with AMD offering three free games with it from select retailers. You get Devil May Cry 5, The Division 2, and Resident Evil 2, all three can be pre-ordered at $59.99 each and as the preorder part implies they aren’t available yet so you are getting brand new games as they come out. THAT is really what makes the RX590 a great value, without the free games I would recommend the RX580 but even if you only like one of those games it helps bring down the overall price if you figure them in. So there you have it really, if you are shopping for a mid-range card, the RX580 and RX590 are really the best direction to go right now. I love the GXT 1060 I use in our Lunchbox 4, especially for its power usage, but the 1060 is way too expensive in most cases and performed consistently lower than both the RX580 and RX590. Picking between those really depends on if you like any of the free games you can get with the RX590 or if you need just an extra small bump in performance over the RX580.

As for the XFX RX590 Fatboy, I tested today, if you like its styling then it will be all peaches and cream because that was my main issue with the card. Beyond that, it performed well, had a good overclock, and doesn’t have even one LED light let alone RGB light for those of you who aren’t into that sort of thing. 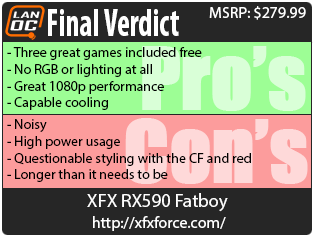 You might call him obsessed or just a hardcore geek. Wes's obsession with gaming hardware and gadgets isn't anything new, he could be found taking things apart even as a child. When not poking around in PC's he can be found playing League of Legends, Awesomenauts, or Civilization 5 or watching a wide variety of TV shows and Movies. A car guy at heart, the same things that draw him into tweaking cars apply when building good looking fast computers. If you are interested in writing for Wes here at LanOC you can reach out to him directly using our contact form.
Discuss this article
Log in to comment
Posts in discussion: XFX RX580 Fatboy