Finally, we can take a look at the RTX 3080. Nvidia has been breaking down barriers and changing things around when it comes to their Founders Edition designs. Up until the 2000 series, they stuck with the same blower design that they have always used for their reference cards and even the first few generations of Founders Edition cards. With the RTX 2000 series launch, they finally dropped the blower design and went with a two fan axial design, which is similar to what aftermarket cards have been doing for a long time. This took away some of the edge that the aftermarket cards have and I still think the Founders Edition is still one of the best looking cards out there. Part of that is Nvidia’s use of a metal casing which gives the card a more solid construction and more quality feel. This time around they did stick with the axial fans and even two fans, but the design is nothing like anything else ever made. They did stick with the black and silver theme which is nice, but this time around there is a lot less of the silver finish and a lot more black. There aren’t any acrylic windows like on the 780-1080 cards. There also isn’t any chrome to be found like on the SUPER cards launched last year. In fact when looking at the main side which is normally what you would call the cooler side with the back being the backplate. There is only one fan visible even though I have already said it has two. The design has an X shape made out of the silver metal trim and then on the left, we have a mostly normal black axial fan that blows down against the PCB. Around it though, what would normally be a cooler fan shroud is all heatsink. They have fins everywhere and they all are orientated in different ways. On the right, the fins even have a V shape. 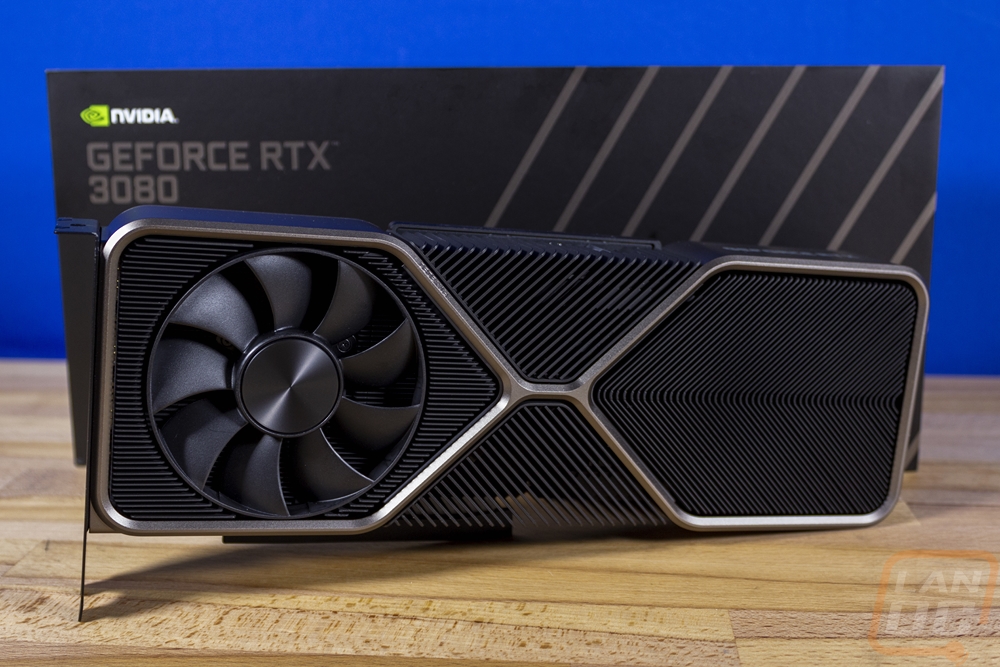 When you start looking a little closer there are a few different things that can be noticed. For one they normally have the model name branded in big letters on this side but with this design that isn’t possible. They did still slip it in though in the thin silver X shape just above the fan on this side. Also on the right portion of the card, you can see through the fins and see some of our background as well as a shape that looks like a fan. That’s right, the PCB doesn’t go the full length of the card, it runs short and allows part of the cooler to have full flow through air. 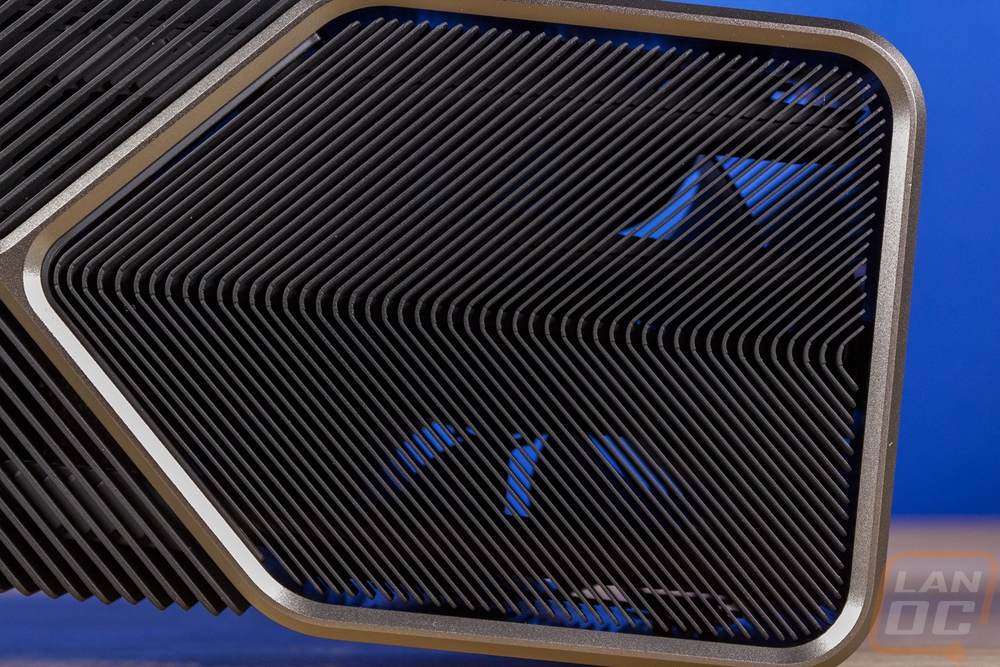 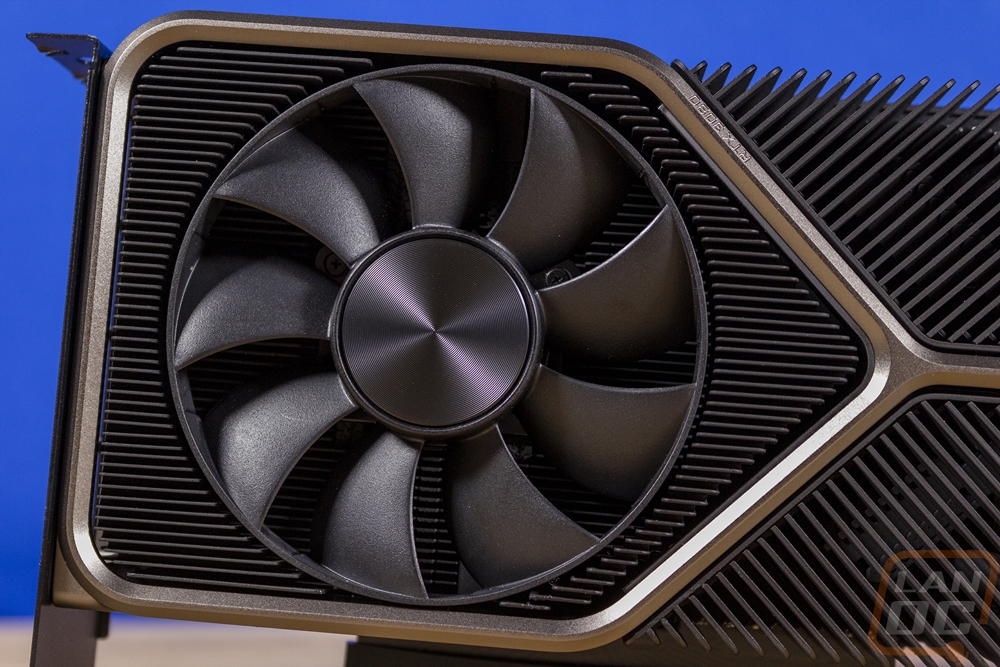 Flipping the card around, you might almost think I didn’t change anything at all if you didn’t spot the PCIe bracket that is now on the right side. Which speaking of, I was happy to see at least with this card that Nvidia mostly stuck to the standard height though they did push it as far as they can. This side does still end up having a backplate like a traditional card. You can see the solid panels on the right and middle where they also included a more visible RTX 3080 logo in silver. But the left has the unusual fan. It isn’t the same fan as on the other side as you might first thing. But the blades have been flipped around for it to spin in a different direction. This is designed to pull cool air in on the same side as the other fan but to blow it up and through where the main fan blows against the PCB then out the PCIe bracket like Nvidia’s older blower designs. 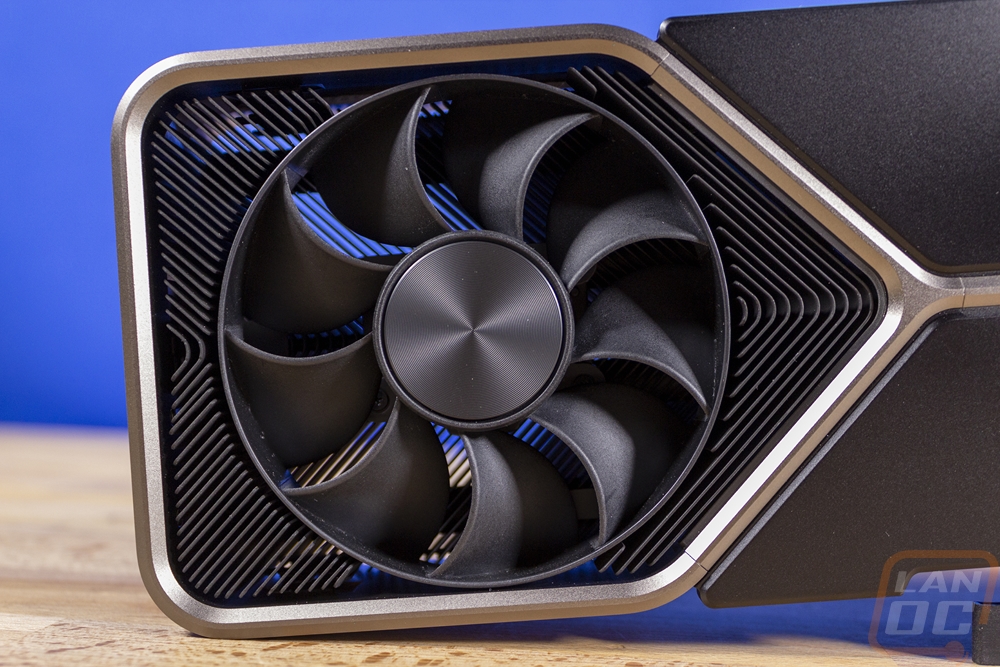 The RTX 3080 is a total of 285 mm long or 11.2 inches, 4.4 inches tall or 112 mm tall, and is a two-slot card which is a relief given the aftermarket cards that are all going to thicker 2.5 or even 3 slot designs. Not to mention the flexibility in even what is considered a slot width which I think everyone should need to list actual width as well but that is just me. Laying the RTX 3080 on its side gives us a good look at the thick cast construction that makes up that V frame design. It covers the cards in 2/3 of the top and bottom as well as the end completely. In the center you can see the fins from the center heatsink and in that area on top they also slipped in the power connection but I will cover that more in a minute. There is also a GeForce RTX logo like on past cards, but this one doesn’t light up in bright green it is now white. Unlike aftermarket cards, the design doesn’t have air blowing out against your motherboard as well which is nice. The end of the card does still have the mounting holes for anti-sag devices in OEM designs which have been on all of Nvidias designs.

Now back to that power connection. The 12-pin power that I already talked about doesn’t sit flat on the PCB like they normally do. TO save space they have it sitting against the PCB on its side and sitting at an angle back in the center of the top of that card. It is a weird location, to say the least. The reason for this is because this is near the end of the PCB, the blow-through design requires the PCB to be shorter which doesn’t leave room for the plug at the end of the card unless they do an internal pigtail like they did on a few of their older x60 cards. But given the 320-watt TDP, I imagine keeping the connection short is best. So not only do you need to use an adapter unless you get a power supply with this cable (which I imagine will be coming soon). You have to use the Y shaped cable and it is split around the backlit logo so you can still see that. 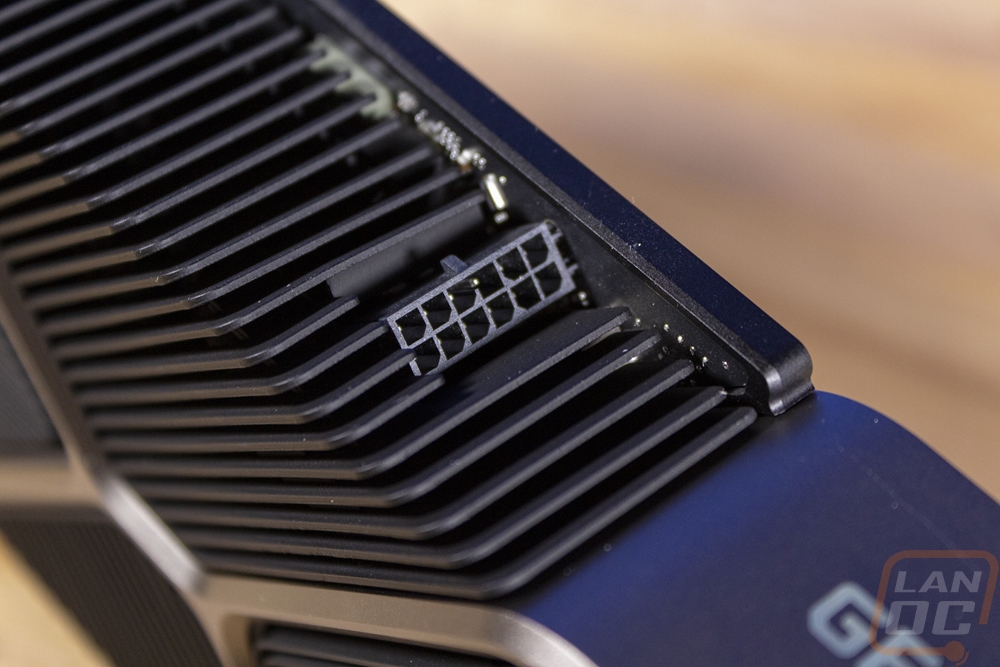 Here is a look at the full PCB of the RTX 3080 as well. Nvidia did a great job of packing a lot into a little space here. You can see the GPU in the middle is flanked with the memory around it then on both sides VRMs. From there they just have enough space on the left for the display connection, the PCI 4.0 slot on the bottom, then on the right up top, you can see that angled 12-pin power connection. The V shape end helps use every bit of space while still fitting the heatsink and fan down at the end of the card. 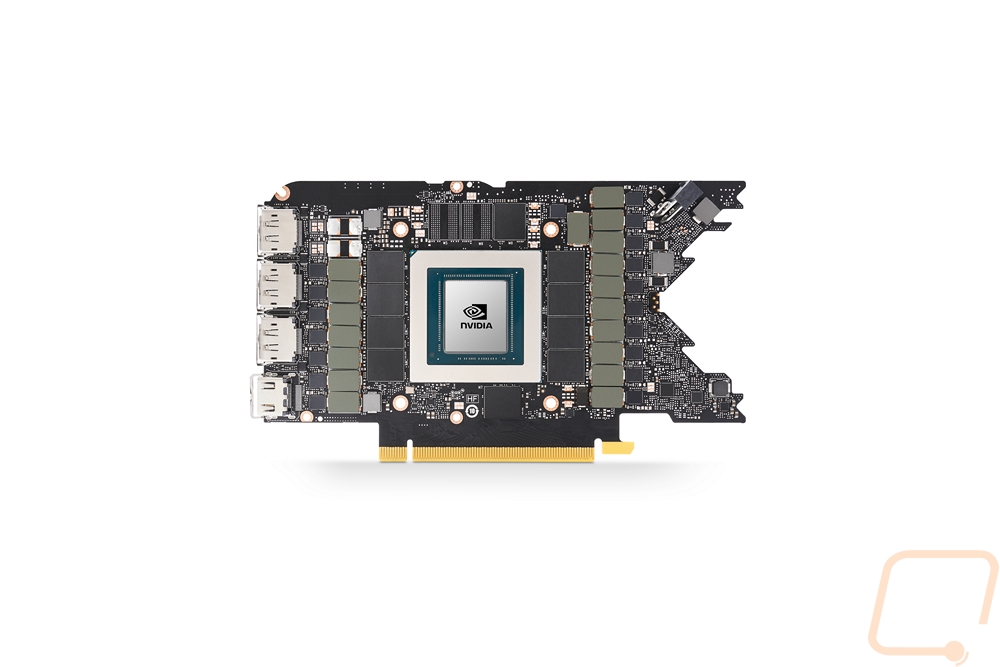 Speaking of display connections, the big change for this generation is that the HDMI port is now officially and finally 2.1. This means 8K support with the new 48 Gbps connection. There are then three full-sized DisplayPort connections running at DP 1.4a which supports 8K at 60Hz or 4K at 120Hz. But it isn’t the connection options that made the end of the card stand out. For one Nvidia hid all of their certification branding down here as well as your serial number. I like the serial number because you might be able to spot it without pulling your PC back apart. The other big thing are the HUGE holes for ventilation. In the past, Nvidia has been extremely conservative with the bracket ventilation holes so this was a surprise. But they do have the left half of the cooler blowing out this end so it is important.

Before jumping into testing I did get out our RTX 2080 Ti which I have been keeping safe in my PC while playing Microsoft Flight Sim 2020 to compare its size to the RTX 3080. You can see that the 3080 is noticeably longer, which is going to be closer to what the 2080 Ti aftermarket cards were in size. As for thickness, once you add in how the 2080 Ti’s fans stuck out you are about the same in thickness which should be at least one good thing for SFF fans. 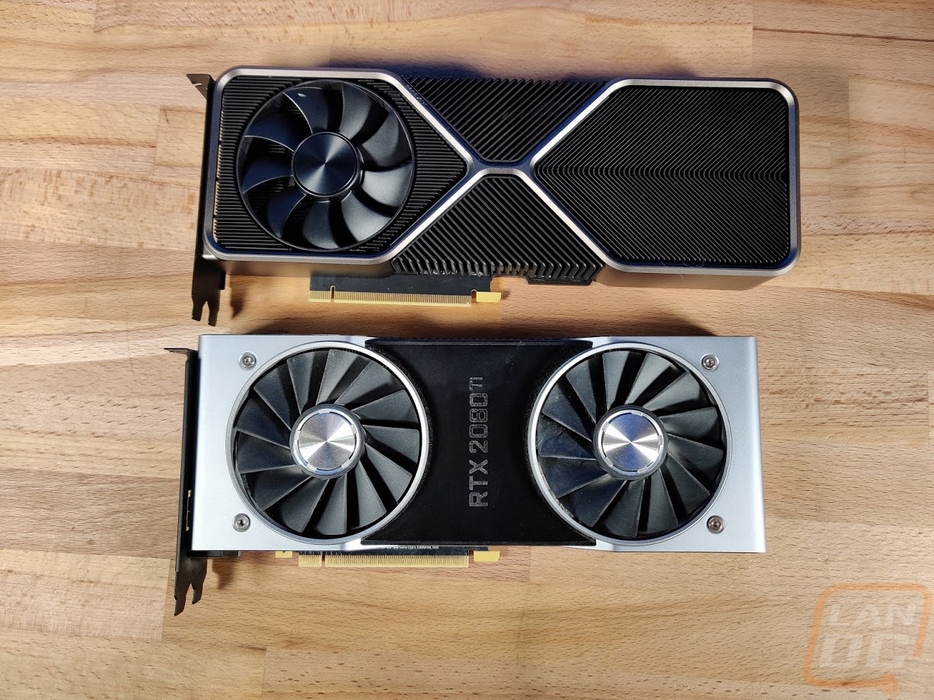 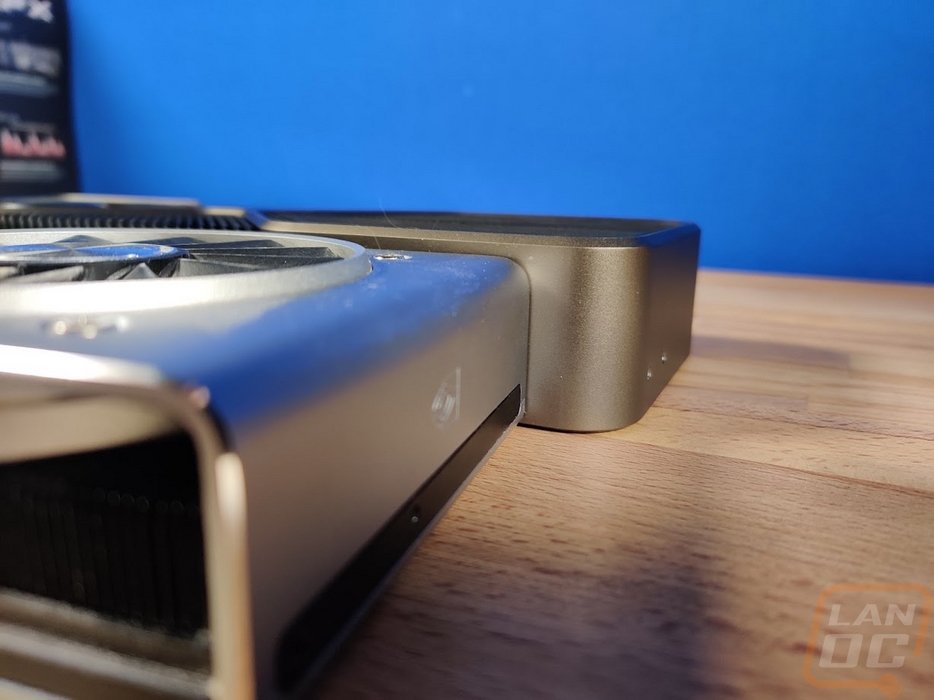 On top of the white backlit logo up on the top edge, Nvidia did also slip in lighting behind the X shape in the middle of the main side of the card which looks good when up and running. This is more like a feature you would find on an aftermarket card than a Founders Edition, but I welcome it! 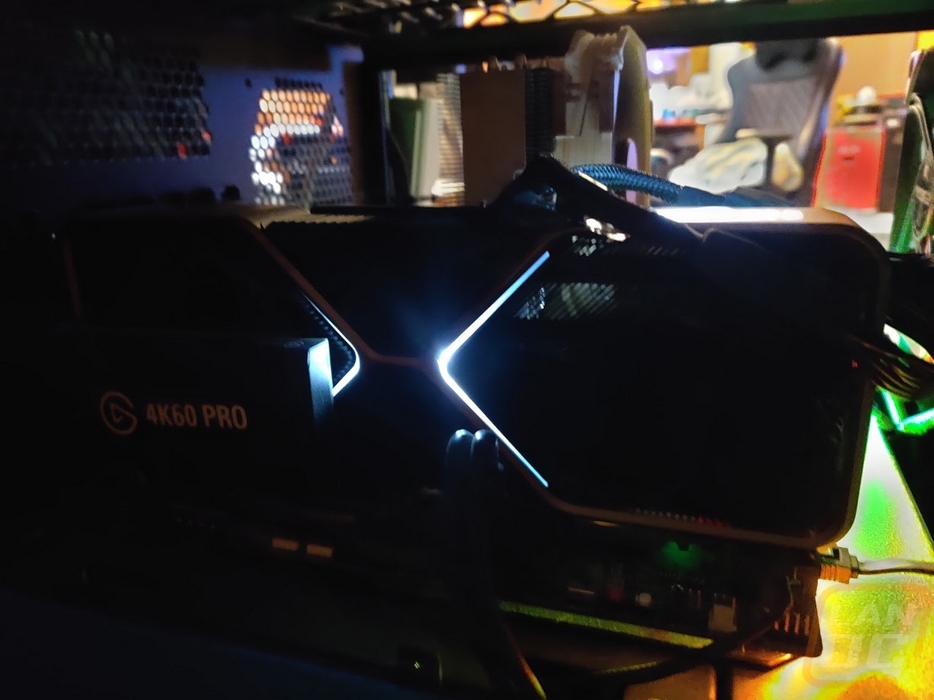