2020 has been a crazy year for almost everyone and the list of reasons for it are really long, especially with the ongoing pandemic. But on the hardware front, Nvidia’s announcement about their 3000 series of cards surprised a lot of people. The RTX 3080 and the RTX 3090 were a big part of that, but the RTX 3070 also created a lot of excitement. Nvidia showed its performance to be right with last generations' flagship, the RTX 2080 Ti, and with a price of $499 it immediately changed the used market and gave gamers who don’t have a bottomless wallet hope. Well the RTX 3070 will be available on October 29th at 9 am EST and before that mad dash, I’m going to put the RTX 3070 Founders Edition through our test suite to see if the RTX 2080 Ti claims are true and to find out if it is as good of a deal as it sounds.

Nvidia’s announcement of their 3000 series of cards came alongside information on Ampere which is what they are based on. I spoke about ampere in our RTX 3080 review but to keep things short it is the successor to Turing which was used in the 2000 series of cards. They took advantage of the 8nm process from Samsung to cut down die size and power usage from Turing’s 12 nm process. But most of the improvements come from improvements in the Tensor and RT cores as well as a change that allows FP32 to run on the normal FP32 core as well as the Integer 32 core now which doubles the possible performance in floating-point when integer calculations aren’t needed. Turing had each split into their own dedicated cores.

As always I also ran GPUz before getting into testing. I wanted to see if the clock speeds matched up with the specifications and I also like to document the BIOS version and driver that I did my testing on. In this case, my driver was the pre-launch driver 456.96. The boost clock lines up as does the memory clock speed. 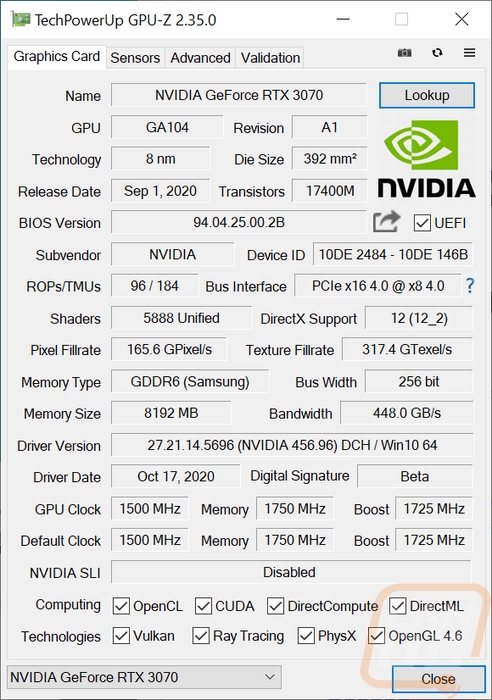 We have 1435 guests and one member online