The RTX 3070 Founders Edition has also stuck with a similar design as the 3080/90 which I like with the exposed black heatsinks, blow through design, and dark silver shroud ring. The all-metal construction also really helps the overall quality, the Founders Edition cards always have this and not only does it make them great weapons but they do protect the cards more as well. Last month I knocked over an entire shelf filled with 1000 and 2000 series Founders Edition cards and other than scratches they were fine.

The RTX 3070 FE does have a smaller form factor than the RTX 3080 and because of its shorter length and otherwise PCI compliant size, it is a great fit for SFF cases like the Sentry 2.0. The smaller design does mean the shroud which was an infinity symbol or an 8 is now an S. It also doesn’t have the X in the middle now and with that no white backlighting. In fact, there is no lighting at all which is a change from the past Founders Edition cards, normally the branding up top is at least. My only complaint with the design is the location of the new 12-pin power plug which is in the top middle of the card. Even the RTX 3080 put the plug at an angle to make it a little easier, but this one points directly up. The included adapter is also short. Between the two issues, hiding your wiring is going to be impossible. At least until PSU companies have full cables available.

Cooling performance was solid, more so than you might expect and the same goes for noise performance as well. Combining that with the performance and it makes this a card with a LOT of potential. The biggest limitation is, like with the RTX 3080 and 3090 going to be availability. Nvidia pushed the launch to get more availability, but we do have to remember that there has been and still is an ongoing pandemic which has caused slowdowns as well as more demand in some areas as well. No one knows for sure how much of a role each has played in things, but we can only hope that it is better for this launch.

As for pricing, well things have come back down to earth, and while I still consider $500 to be a lot of money. The RTX 3070 Founders Edition’s MSRP of $499 is finally in reach of a lot more people who are doing builds. It’s crazy in a way that I would consider that a value, but the performance difference between this and last generation along with the price difference it is a value compared to how things have been. It is also just in time for more RTX-supported games, namely Cyberpunk which I know I’m excited for. Now we know that AMD has Big Navi coming extremely soon as well and I would never want to push for everyone to ignore that. But I can say that right now the RTX 3070 is exactly what we expected, assuming they can be found. 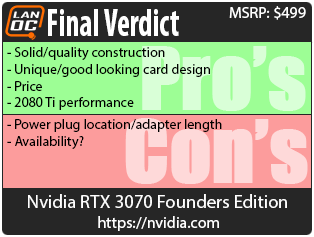 You might call him obsessed or just a hardcore geek. Wes's obsession with gaming hardware and gadgets isn't anything new, he could be found taking things apart even as a child. When not poking around in PC's he can be found playing League of Legends, Awesomenauts, or Civilization 5 or watching a wide variety of TV shows and Movies. A car guy at heart, the same things that draw him into tweaking cars apply when building good looking fast computers. If you are interested in writing for Wes here at LanOC you can reach out to him directly using our contact form.
Discuss this article
Log in to comment
Posts in discussion: Nvidia RTX 3070 Founders Edition

We have 1064 guests and no members online