If you have seen the RTX 3080 and RTX 3090 the overall look of the RTX 3070 will be familiar but not completely the same. The black finned design that Nvidia has gone with this generation drops the standard sheet metal heatsink design and makes the entire shroud the cooler. For the RTX 3070 though they have more of a standard design that has two fans on one side where the 3080 and 3090 had a unique design with one fan on each side. Portions of the design are still there though like the black fins and the infinity design is mostly there but is now in the shape of an S because there isn’t as much room in between the fans with the shorter card length. 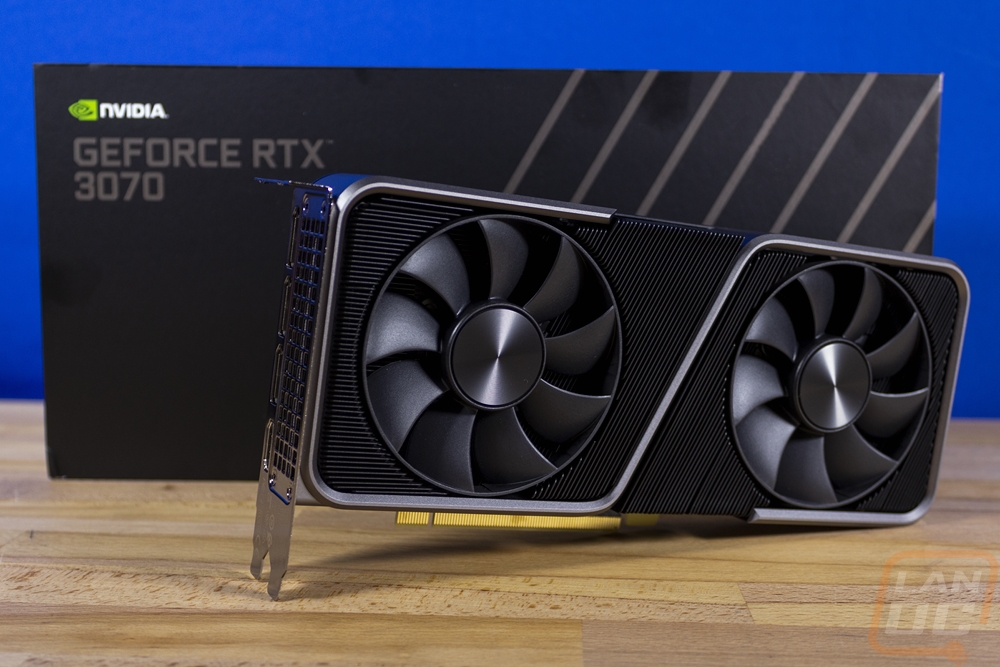 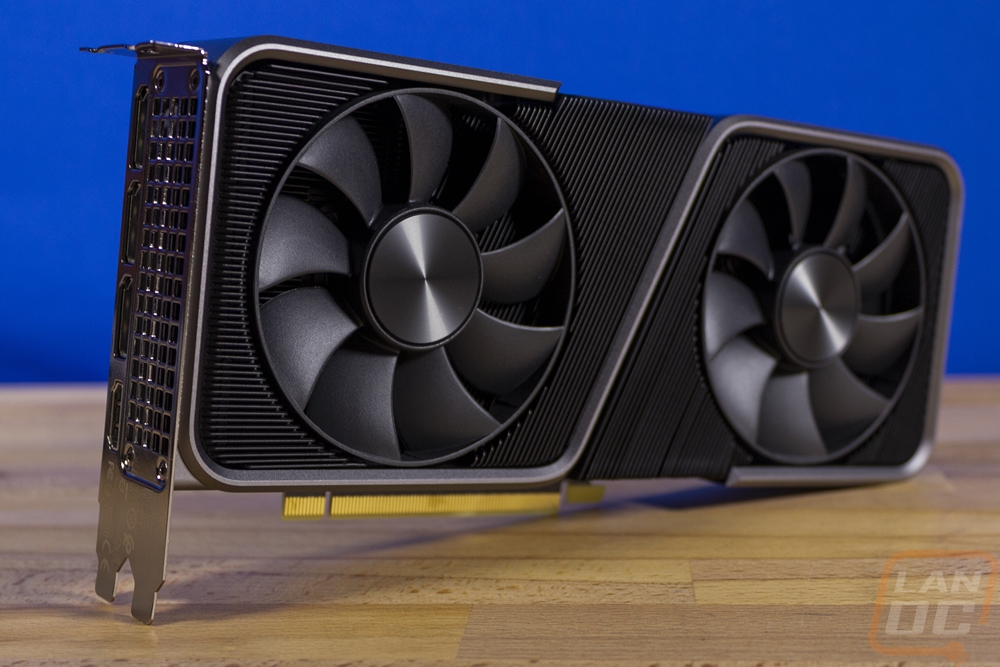 The side profile gives a better look at the S-shaped design and I have to point out that like all other Founders Edition cards the RTX 3070 FE does have an all-metal heatsink design that is a lot heavier than most aftermarket cards. Even with both fans being on this side, the 2070 FE fans do still have the same fan which is a 9 blade axial design with an outer ring. The center section has a metal cap, something Nvidia does on all of the Founders Edition cards as well, only for this generation the center cap has a darker finish that better matches the black anodized fins and the dark silver finish on the S shroud. You can also see how the left fan is like a normal design where it blows down against the PCB and the right fan like the 3080 and 3090 does blow through the card exiting out the back. 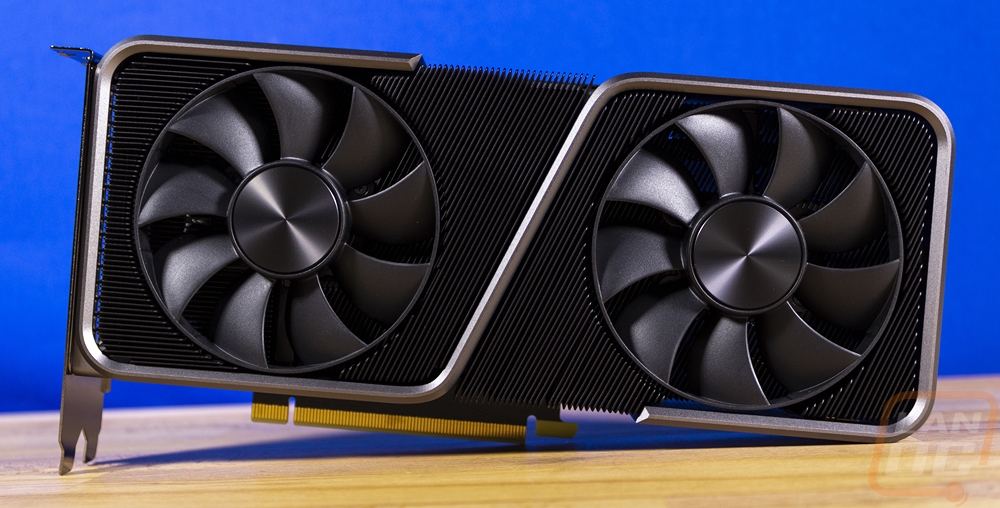 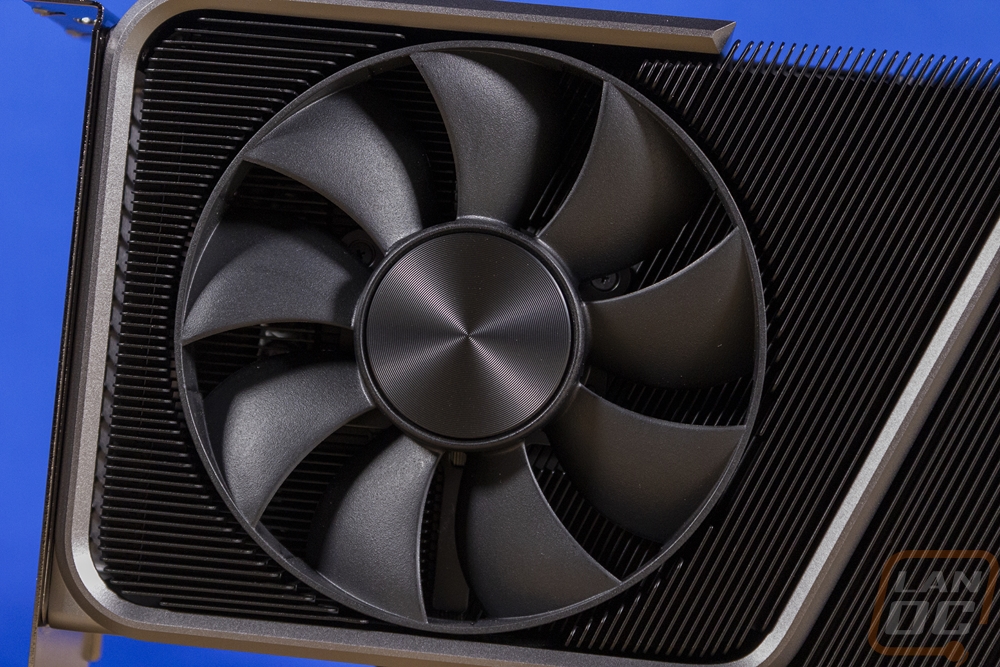 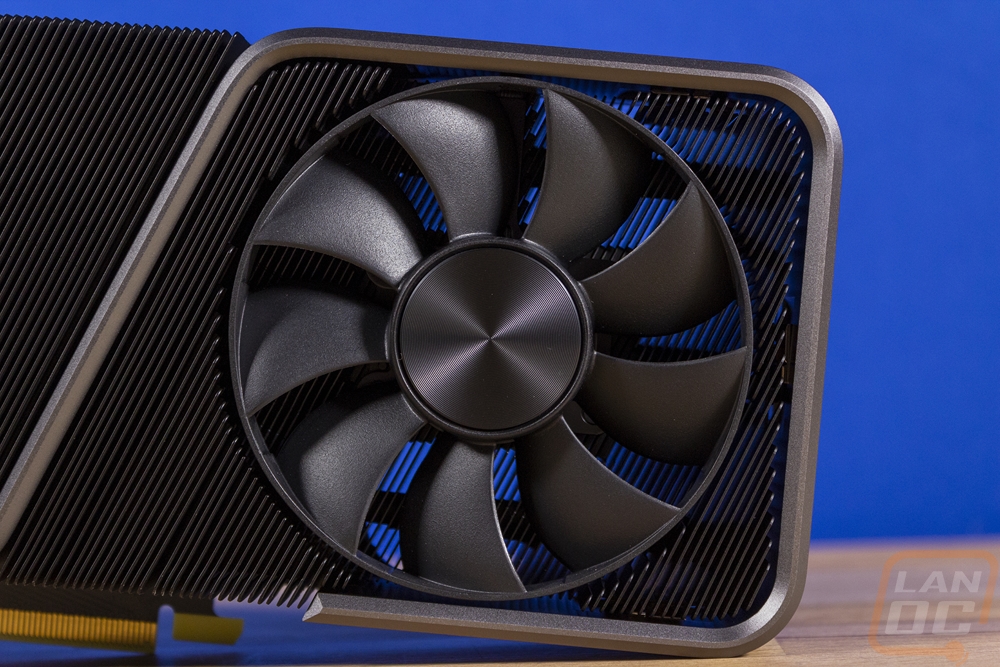 The blow-through design is a lot more obvious once you get a look at the back of the card. This is where the RTX 3070 diverges from the 3080/3090. They had a design that matched the front of the card, but with the RTX 3080, Nvidia has a traditional solid backplate on 2/3 of the card covering up and protecting the PCB. Then on the end the exposed black heatsink fins for the blow through design. I do like the blacked-out design of the backplate and Nvidia did try to keep things similar with the angled grooves machined into the backplate as well as the RTX 3070 branding. When you look through the blow through design you can also see three heatpipes that help pull the heat out across the heatsink. 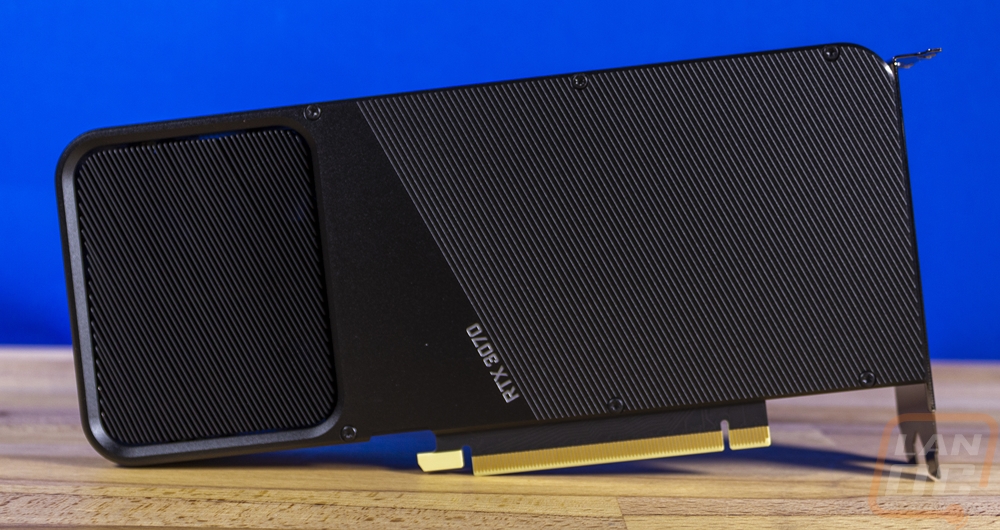 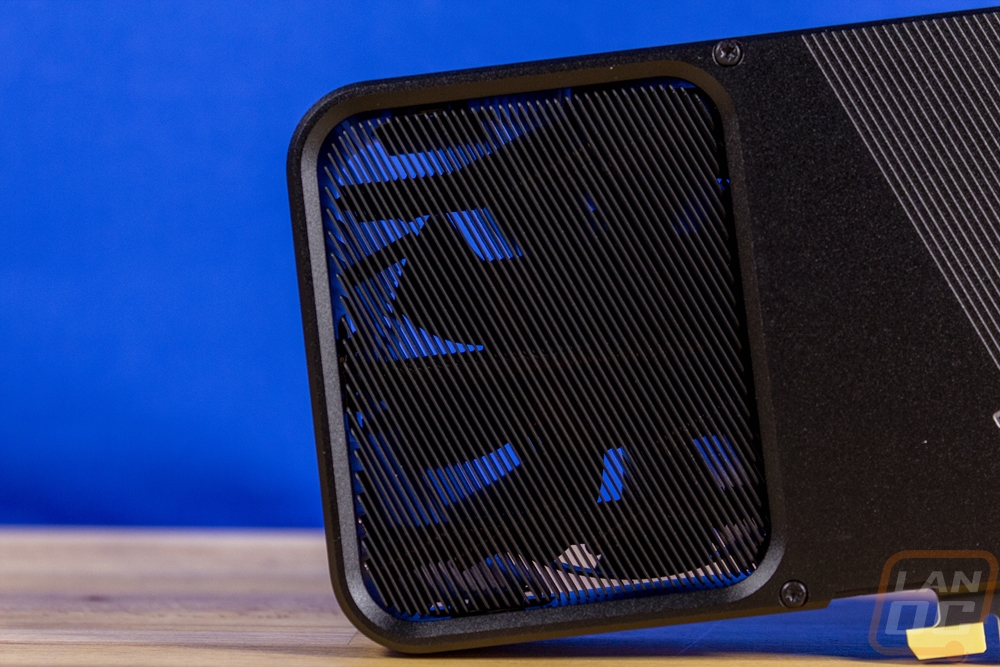 The RTX 3070 Founders Edition takes up the full possible width of the dual-slot design which you can see with the heatsink sticking out just past the width of the PCI bracket. The top, bottom, and end all have the dark silver S shape of the shroud. This includes Geforce RTX branding on the top edge as well as a small section of the black heatsink fins at the top and bottom at the center of the card. For the top, this is also where they have slipped in the 12-pin power connection. Unlike the RTX 3080 however, the plug is arranged horizontally along the PCB and not angled at all. While I like the move to the 12-pin, especially with Nvidia using it on all cards, the center location is still a nightmare for clear looking wiring. Especially when you have to use an adapter right now until power supplies get true 12-pin cables. The end of the RTX 3070 FE does have two removable screws which expose mounting holes for OEMs that need anti-sag mounting and some server configurations. 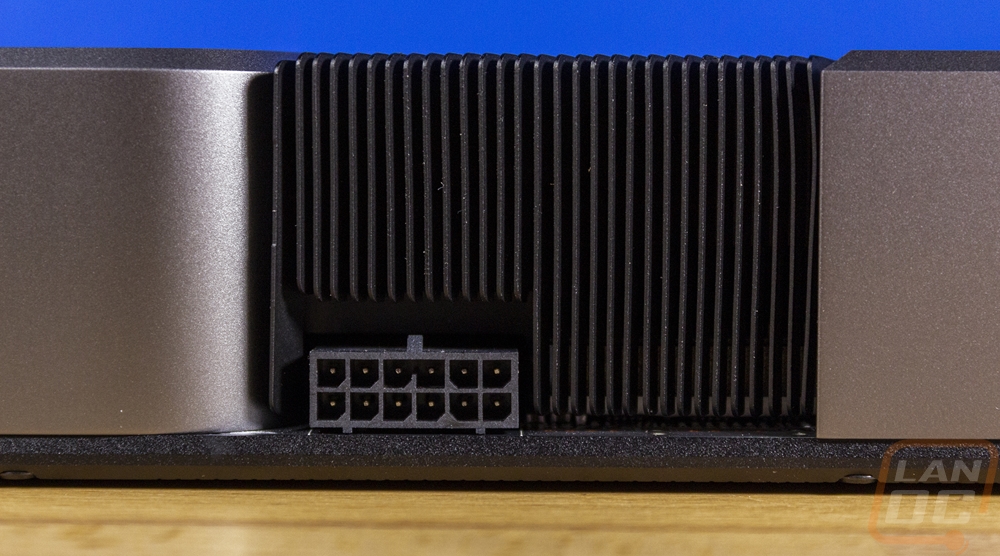 The PCI bracket for the RTX 3070 Founders Edition shares a lot with the 3080, namely the tinted finish and the fact that Nvidia hid all of the required certification logos down there as well as your serial number information to keep the rest of the card clear. But the grill is noticeably more restrictive with its smaller holes enough though they do fill up most of the bracket. For display connections, you get one HDMI and three DisplayPorts which is the standard layout these days. The HDMI port does support HDMI 2.1 which means support for 4K 120Hz.

Like I mentioned, the RTX 3070 Founders Edition is a smaller card when compared to the RTX 3080 and especially compared to the RTX 3090 which is a monster. At 240mm long it is shorter than the 1080 Ti and the 2080 Ti which were both 267mm long but is longer than the 229mm of the RTX 2070 Founders Edition and especially the RTX 2080 and RTX 2070 SUPER which had the same cooler as the 2080. It comes in about 5mm taller than the PCI bracket which should mean support for compact SFF builds as well. 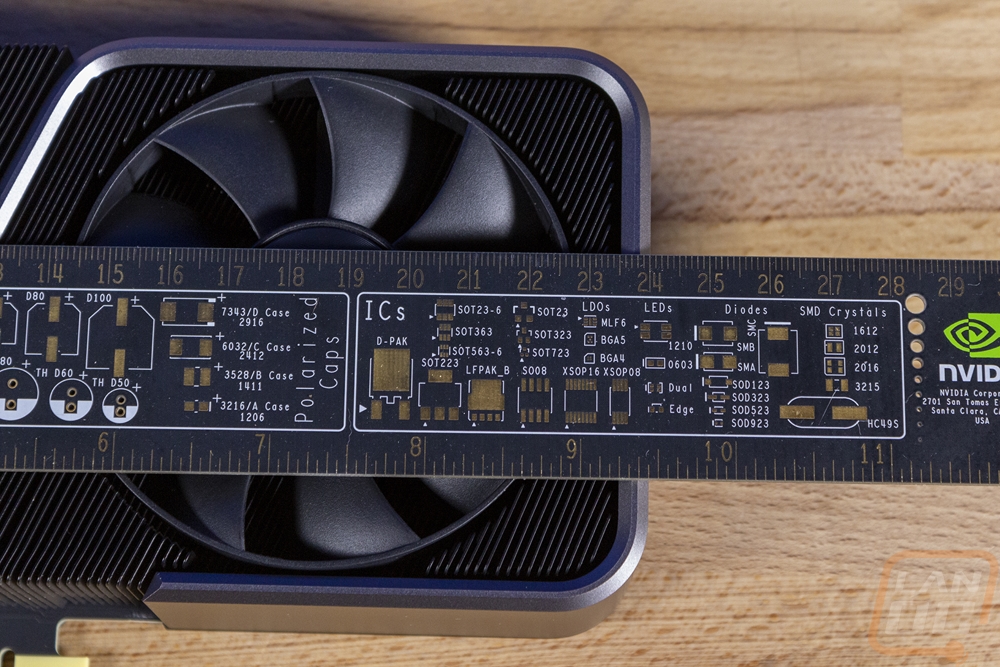 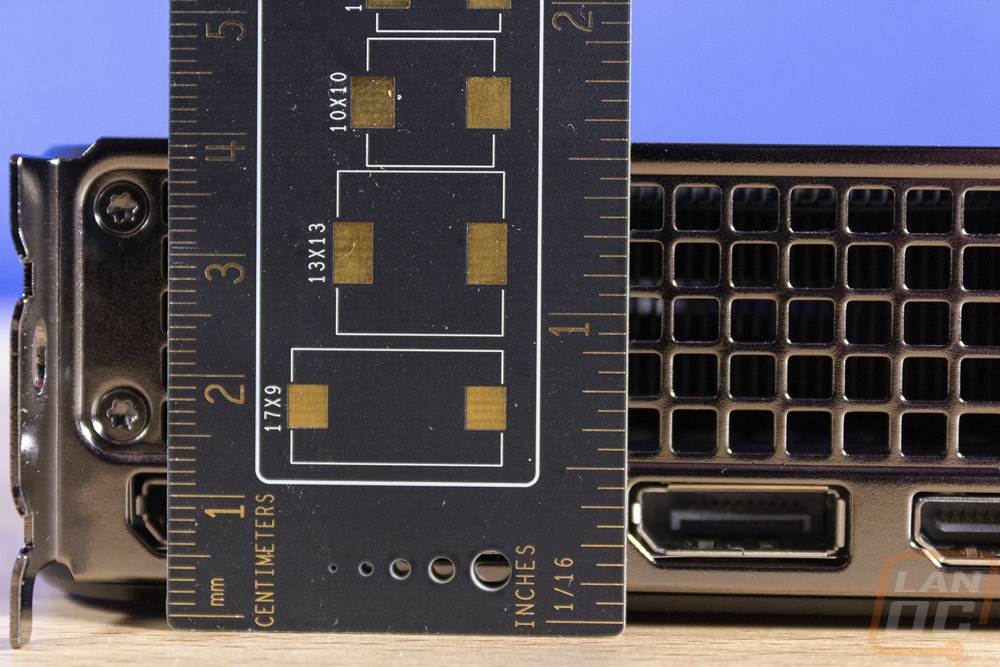 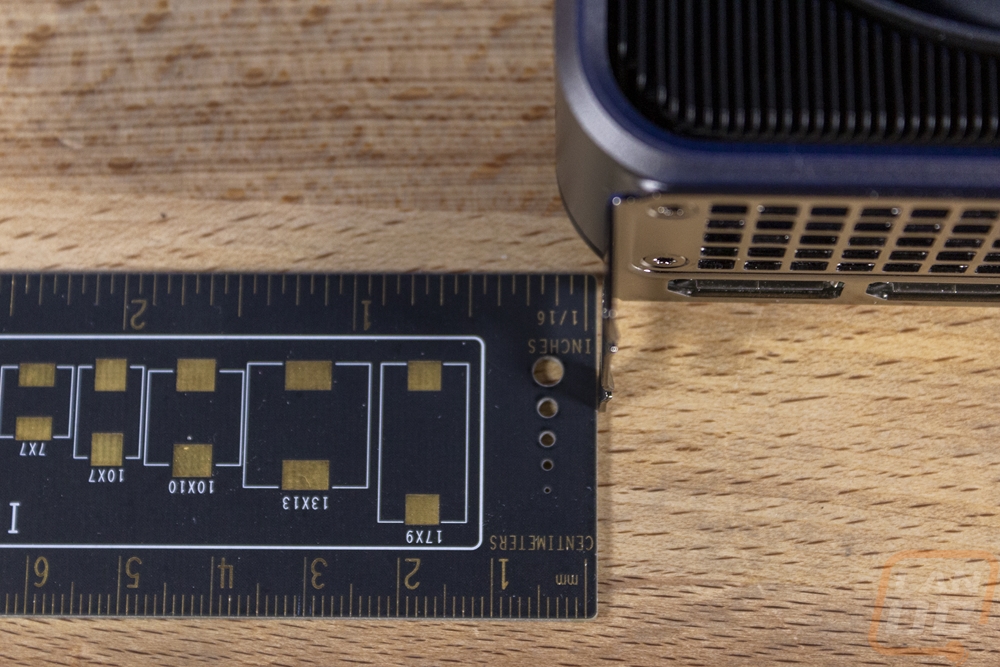 I mentioned it before, but I did want to show what I mean with the adapter and the power plug location for the new 12-pin plug. That top center mount with the short adapter makes it impossible to get clean wiring. Even once PSUs get proper 12-pin cables the location will still be hard. 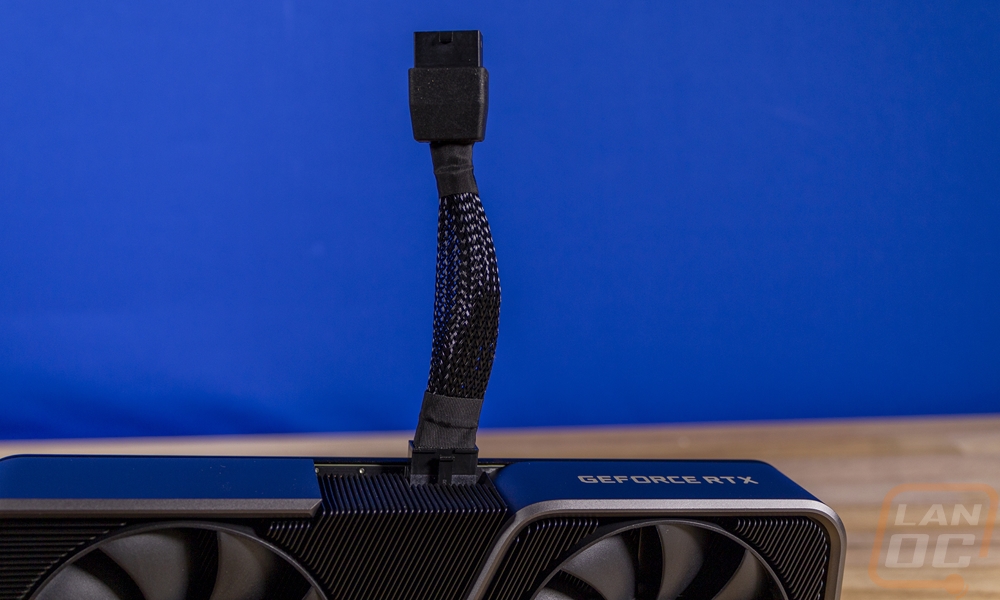 We have 1243 guests and no members online