For my last few tests, rather than focusing on in game performance, I like to check out other aspects of performance. These are also the most important ways to differentiate the performance between cards that have the same GPU. While I have just the one RTX 3070 right now, I am curious to see how the Founders Edition compares to the 3080 and 2080 Ti. For my first tests, I took a look at power usage. I tested twice. Once by using 3DMark Fire Strike during the combined test to load the GPU and CPU like in a normal game and recorded the peak power usage of our entire test system using a Kill-A-Watt. The RTX 3070 Founders Edition came in at 375 watts which is right in the middle of the pack. The 2080Ti which has been competing with the RTX 3070 in other tests was at 425 and the 3080 FE pulled 469. My second test used AIDA64’s Stress Test to load the RTX 3070 FE and not the CPU. In that test, the RTX 3070 pulled 334 watts. The 2080 Ti pulled 374 and the 3080 FE 463 watts. 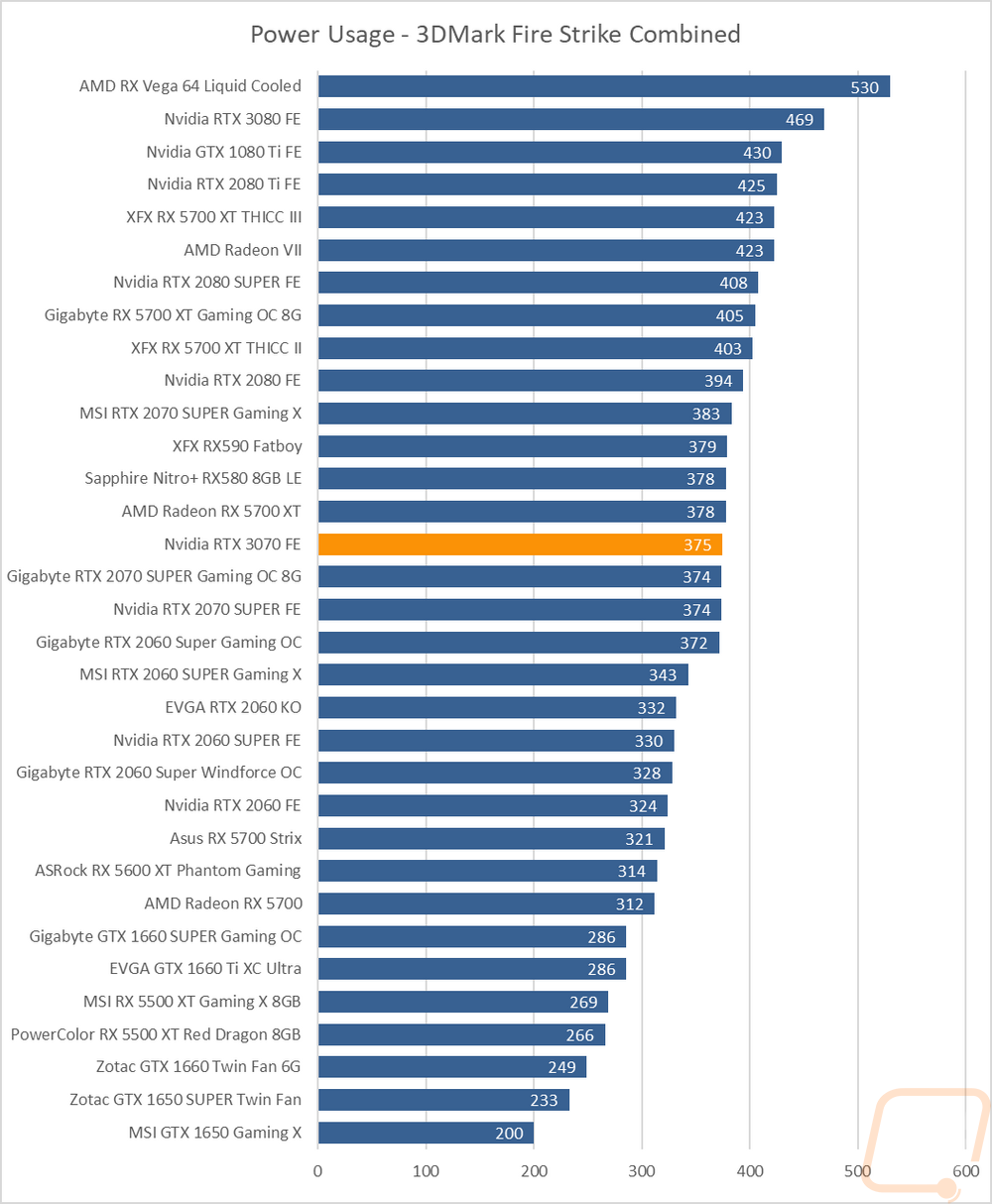 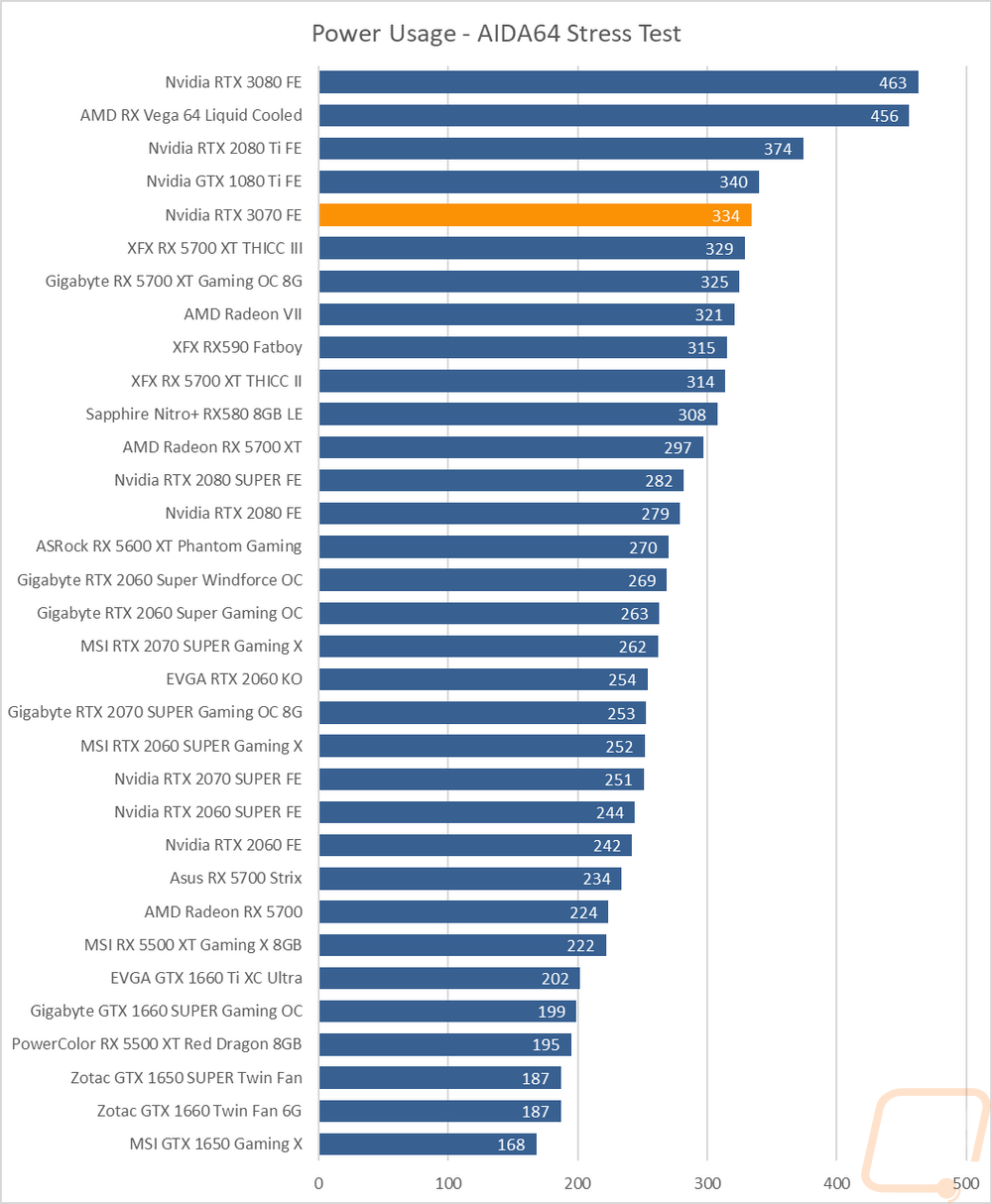 My next round of tests were noise focused. For these, I set up our decibel meter 18 inches away from the test bench. I then tested with the fans cranked to 100%, down at 50%, and then for a real-world listen I used AIDA64 to load up the RTX 3070 FE for a half hour and noise tested it while running hot. The 100% fan performance wasn’t too bad, coming in near the middle of the pack which is impressed considering how other Founders Edition cards normally perform, but this was right in line with the RTX 3080 FE. The 50% noise levels were higher than expected at 42.4 decibels. Then in the under load test, it came in at 38.9 which isn’t loud, but a touch on the higher side (but quieter than the 3080 FE). I also noted the overall fan RPMs when running at full speed as well, this normally shows why a card is louder, but in this case, it shows that for the RPMs the RTX 3070 FE is lower on the noise charts than it is on the RPM chart (more efficient). 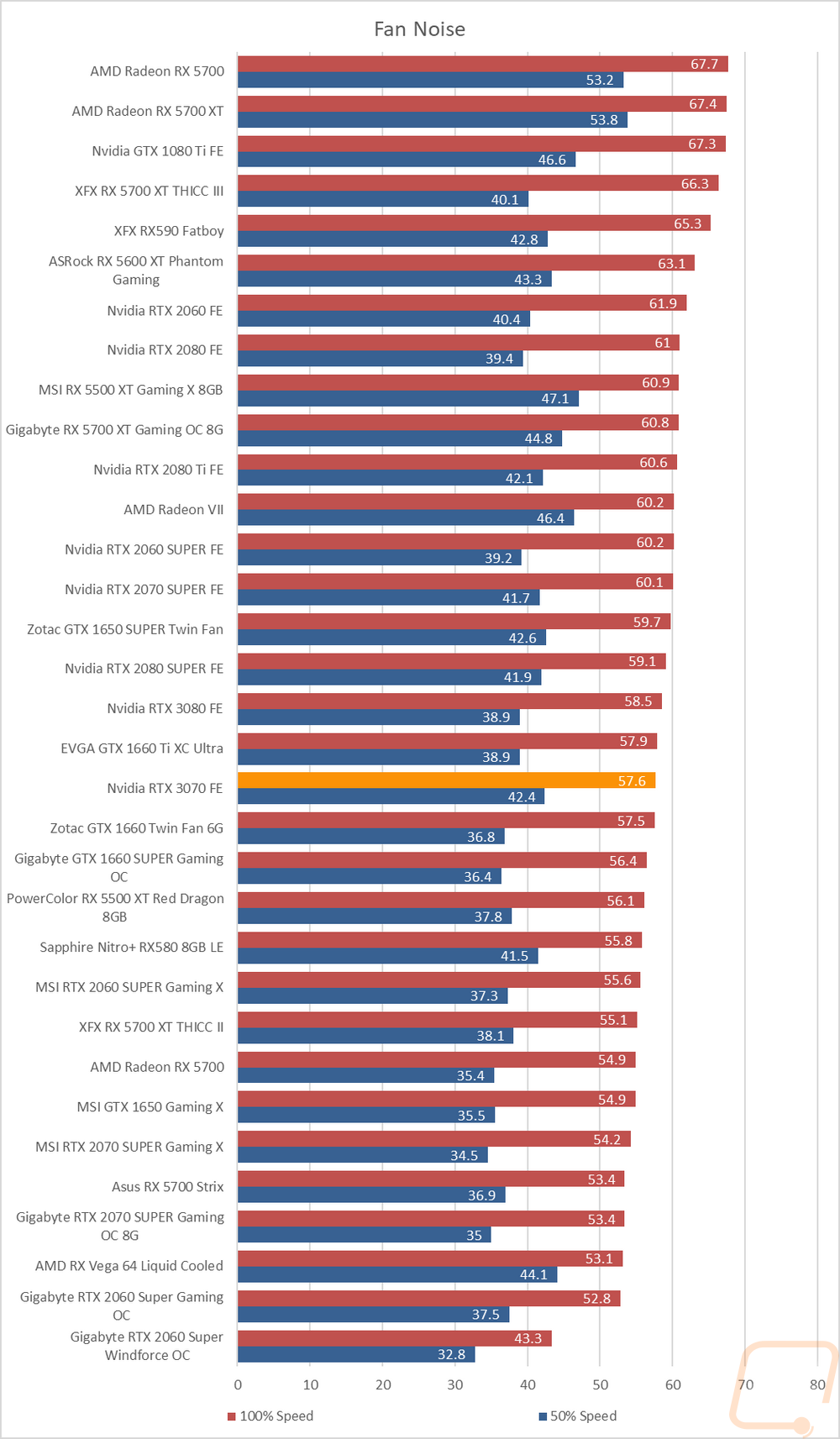 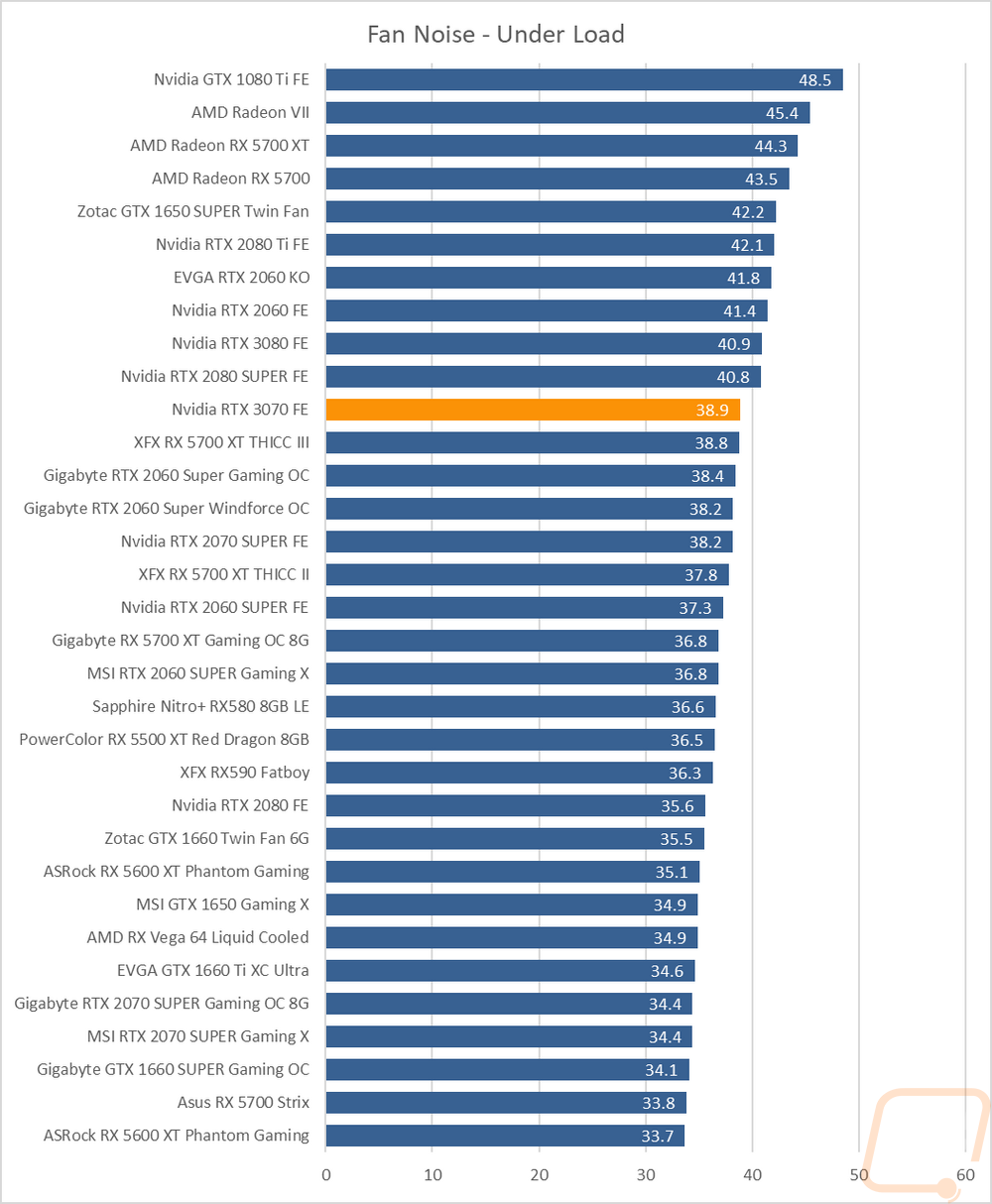 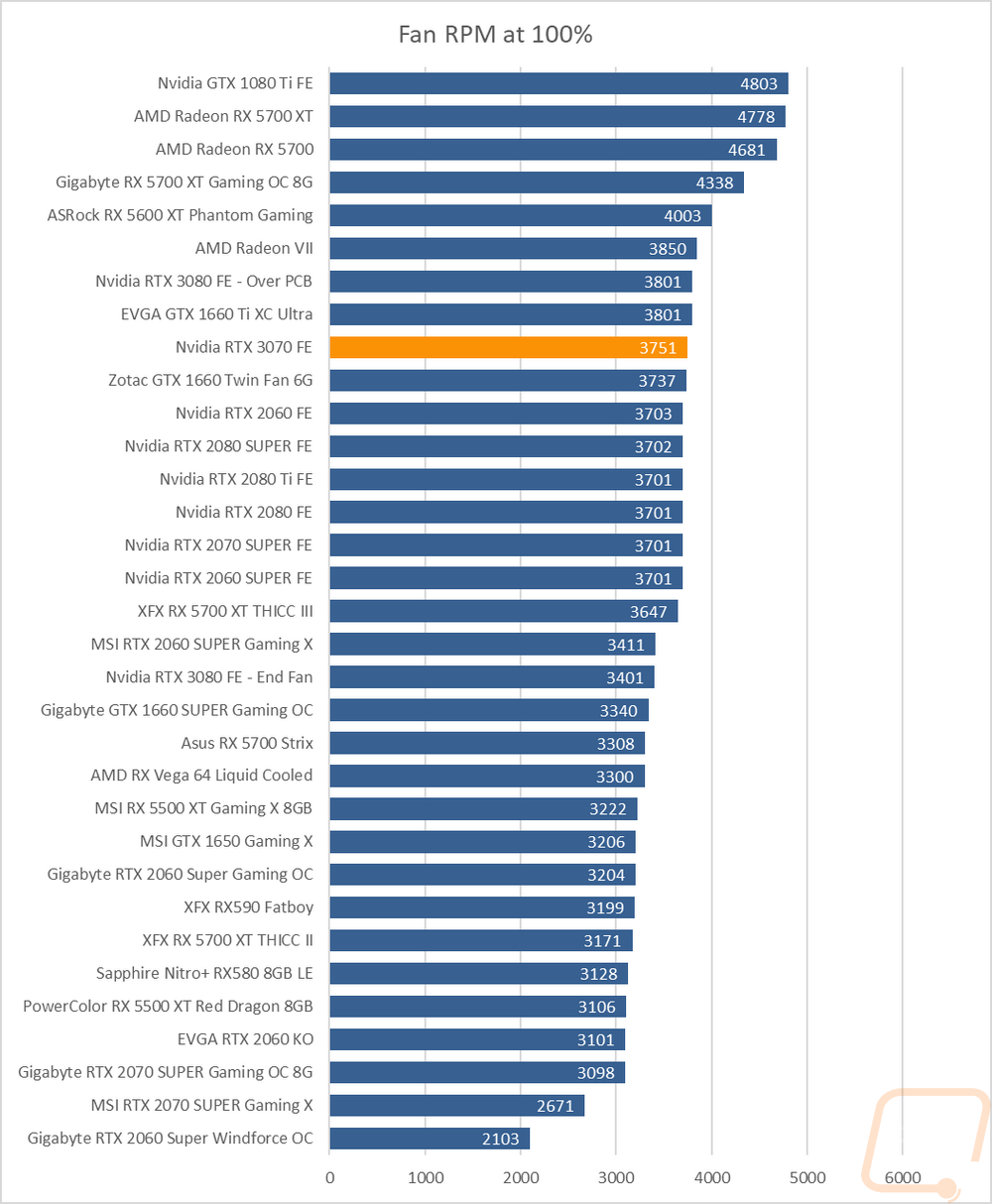 The rest of my testing was focused on cooling performance and this is the most important for a lot of people. Here I stay in AIDA64’s Stress Test and run two tests for a half hour each. One I run with the stock fan profile noting the temperature that the GPU levels out to and then I do the same test but with the fans set to 100% to see how good the cooler can perform. The delta between the two lets us know how much room is left as well. For the stock profile tests, the RTX 3070 FE came in at 71c which is better than the RTX 3080 FE did. It is also average for Nvidia’s two fan Founders Edition cards. Cranking the fans up to 100% dropped things down to 54 degrees which is a delta of 17 and right in the middle of the pack. 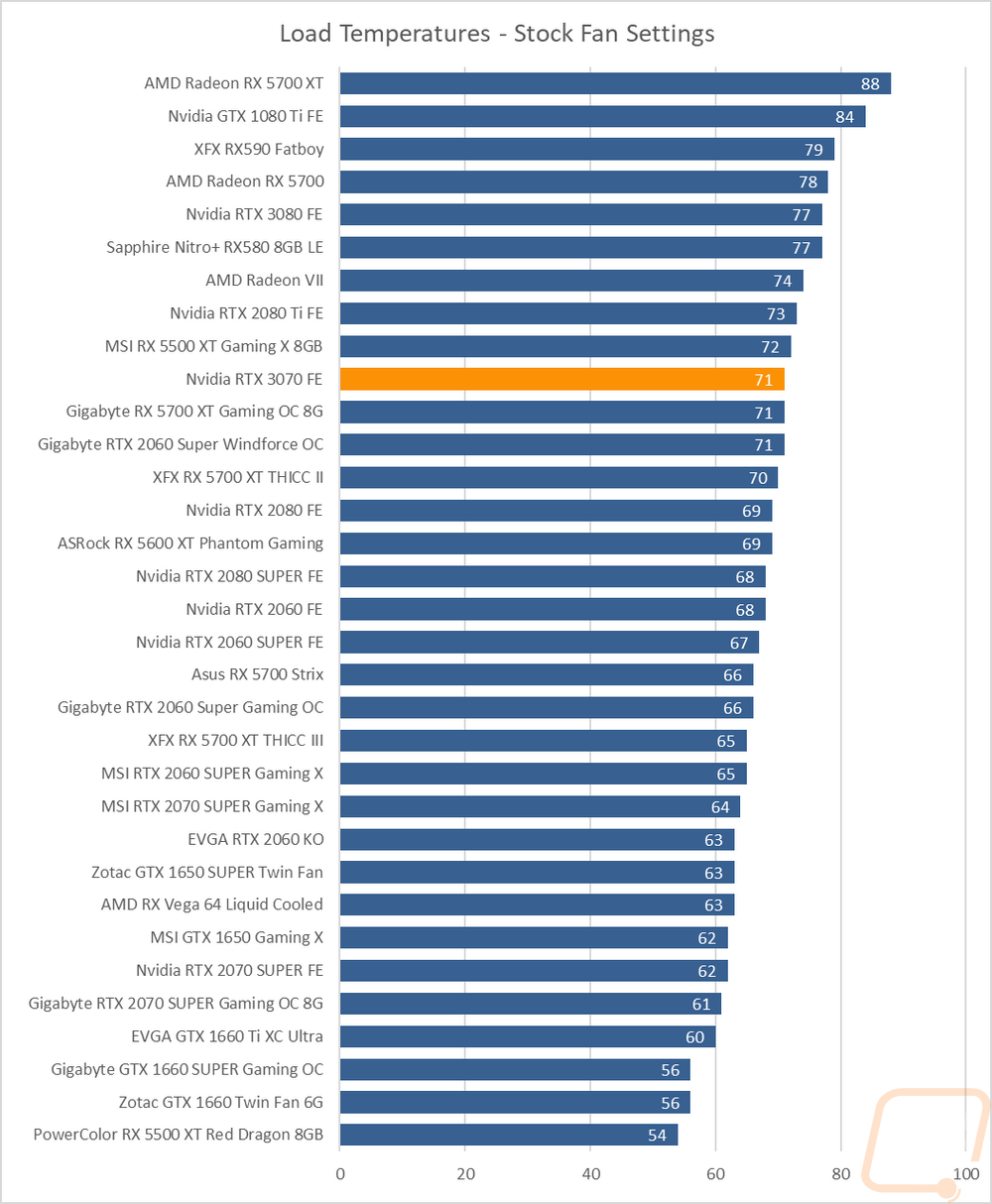 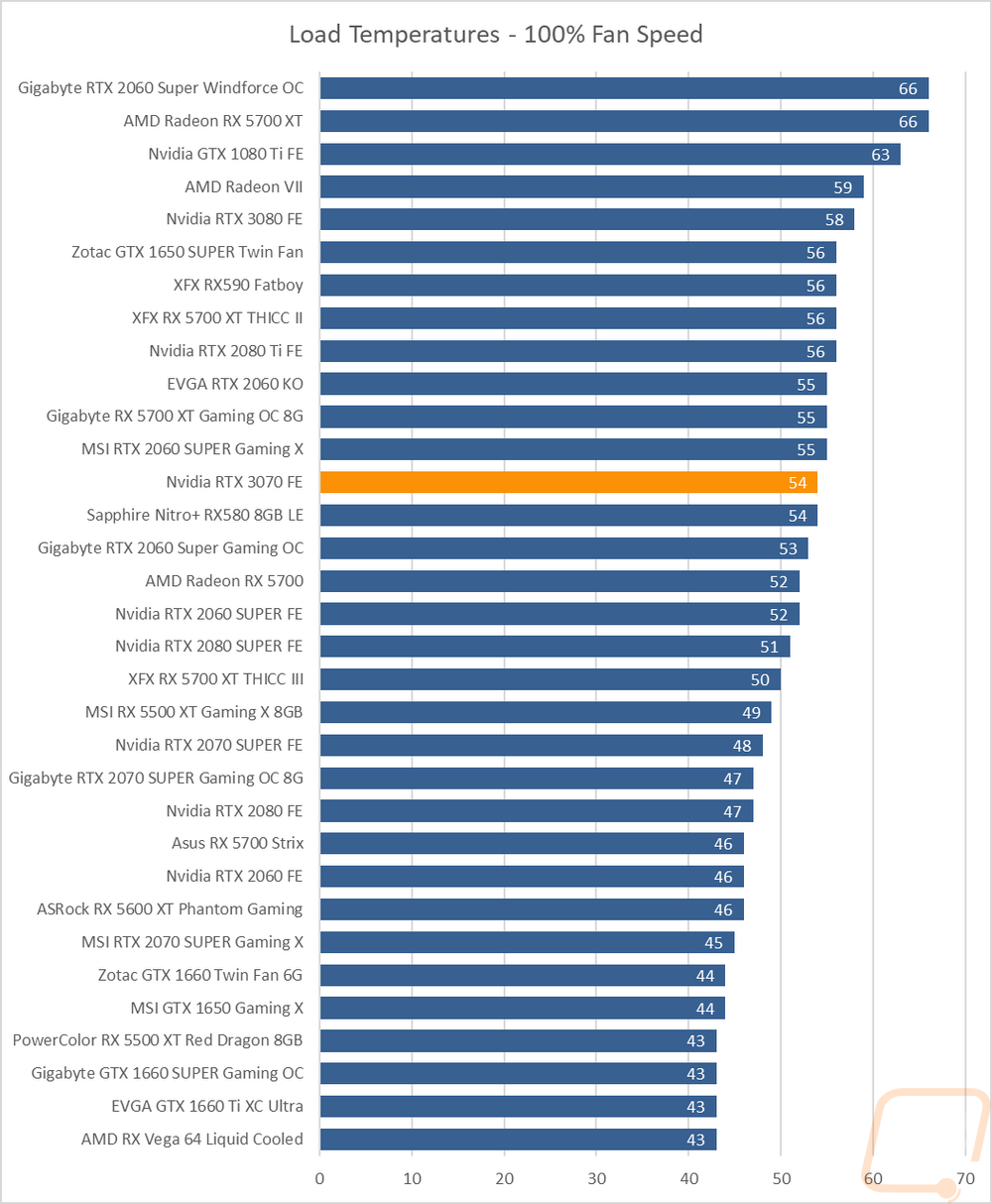 While I was doing the stock fan profile testing, after things were warmed up I also took some thermal images of the RTX 3070 Founders Edition to get an idea of how the dual-fan cooler, as well as the blow through design, were working out. The fan side shows the center of the card which is near the GPU to be getting warm and the rest of that side ran much cooler, especially towards the open end. The exposed heatsinks are also warm up on the top down view with a big delta between that area and the shroud around both of the fans. You can also see how four of the 8 cables in the PCIe are running noticeably warmer as well. Then around on the back, I was surprised to see that the blow-through area was running hotter than the rest of the card. 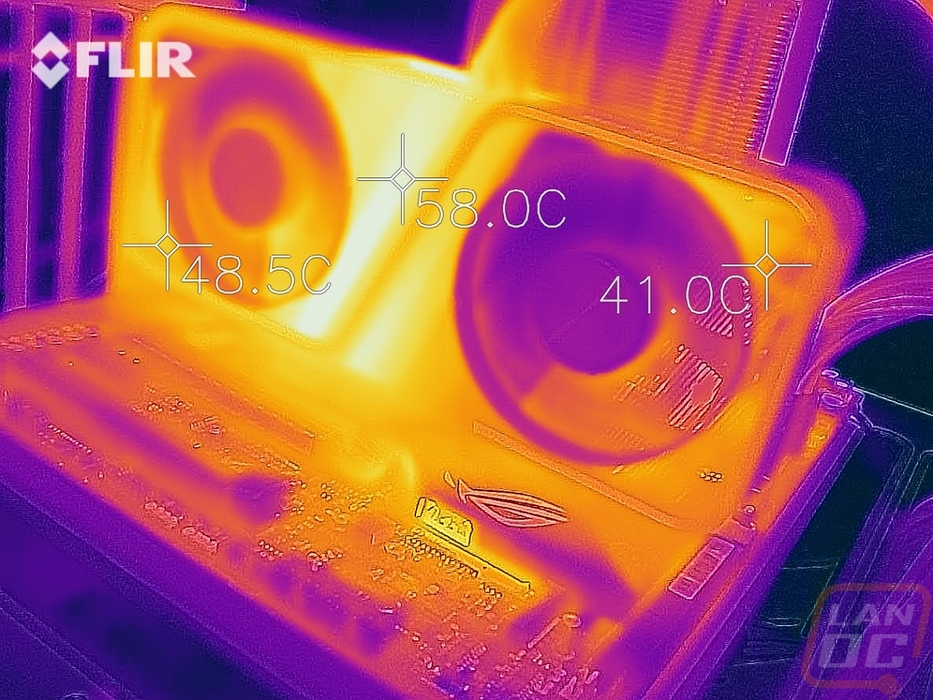 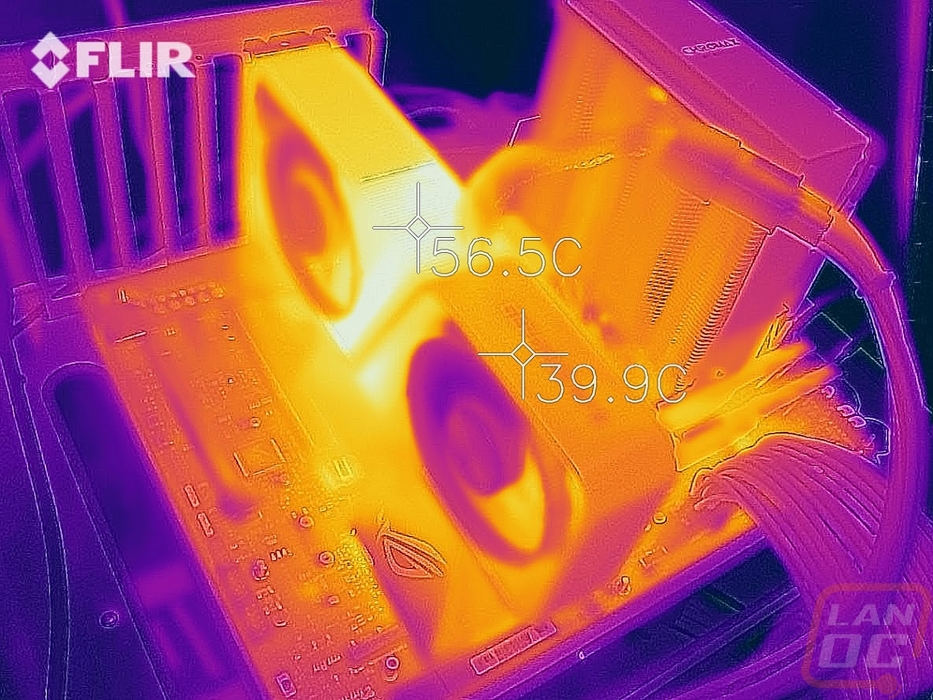 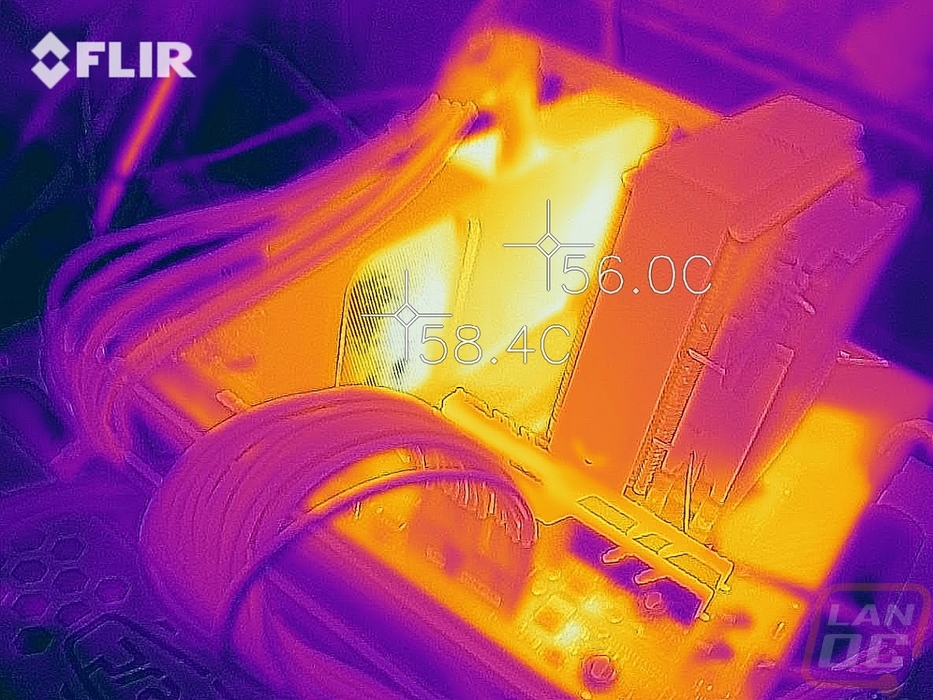 We have 1235 guests and no members online