Well, it didn’t take more than a few of the benchmarks to see right away just how big of a gap the RTX 3080 has put ahead of even the RTX 2080 Ti. This was especially true when gaming at 4K and wish the detail cranked up. If you are planning on playing at 4K, especially with the highest detail settings or at high refresh rates this is now the go-to GPU. Nvidia has upped that even more with Amperes advancements in RTX and DLSS performance as well which RTX performance is now solid, especially when you use DLSS to increase performance.

When it comes to the RTX 3080 Founders Edition specifically which I tested today. Nvidia has once again changed things up with their card design and this time it is completely different from anything else on the market. This is a dual axial fan design again, but they have gone with a short PCB along with a cooler that is all heatsink to use one of the fans as a blower out the back of the card and the other that blows through, out the back of the card. Even with the new design they did still manage to have the same solid construction that past Founders Edition cards have had, mostly thanks to the all-metal construction which is worlds better than most of the plastic fan shrouds that aftermarket cards have. The new design does a solid job keeping the RTX 3080 cool, but when compared to past generations with aftermarket coolers it is still a little behind. I will have to wait and see how this generation of aftermarket cards perform to know for sure though.

As for power draw, this card pulls a lot. More than just about any other card I’ve tested. So plan for that when picking out your power supply. Nvidia recommends at least a 750-watt power supply. Imagine what the RTX 3090 is going to pull, not to mention the overclocked models as well. Nvidia even went with a new power connector for these which I am excited to finally see the dual plugs start to go away. But until power supplies come with the cable, running the adapters is going to be weird and ugly. Not to mention in the fine print Nvidia has a note saying that running anything other than the included adapter could void the warranty. I’m sure that is only if it causes damage, but I know a lot of people are going to want something better looking than the included Y adapter.

Of course, all the performance in the world doesn’t matter if most people can’t afford it. But Nvidia surprised everyone during the Ampere announcement when they mentioned the RTX 3080 Founders Edition would be $699. This is finally back down around the pricing from the past after the original RTX launch having much higher prices. At $699 it is right at the same price as the GTX 1080 Ti at its launch for example. Add in the performance which is way ahead of even the fastest of the last generation and you end up with a surprisingly good value for a high-end card. Add in the huge improvements on the CPU side for the last few years and it feels like we are back in the golden years, especially with more games coming out to push the limits of the hardware like Flight Sim 2020 and Metro Exodus and Crysis Remastered and Cyberpunk 2077 both looking like they will as well. 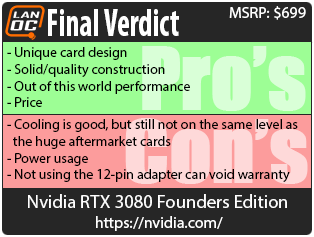 You might call him obsessed or just a hardcore geek. Wes's obsession with gaming hardware and gadgets isn't anything new, he could be found taking things apart even as a child. When not poking around in PC's he can be found playing League of Legends, Awesomenauts, or Civilization 5 or watching a wide variety of TV shows and Movies. A car guy at heart, the same things that draw him into tweaking cars apply when building good looking fast computers. If you are interested in writing for Wes here at LanOC you can reach out to him directly using our contact form.
Discuss this article
Log in to comment
Posts in discussion: Nvidia RTX 3080 Founders Edition

We have 633 guests and one member online