The RTX 3080 Founders Edition is without a doubt a monster of a card when it comes to in-game, synthetic, and even compute performance. But there are a few other aspects of video cards that get forgotten sometimes. Power usage, noise, and cooling performance are all important as well. These are also areas where different models of cards with the same GPU can have differing results depending on their overclock and cooler design.

With a 320 watt TDP, I expected the RTX 3080 Founders Edition to be a power-hungry card and my tests just confirmed that. Our 3DMark test which uses the older Fire Strike benchmark on the combined test that loads both the CPU and GPU up had our test system pulling 469 watts in total when watching the kill-a-watt. Sadly we don’t have the fancy Nvidia test kit which can let us get a better look at the direct power draw of the card only. But this was only higher with the Vega 64 liquid-cooled and was 39 watts higher than the 1080 Ti. Using AIDA64’s stress test I ran the GPU stress test, this time without the CPU being loaded as well for a mode demanding look at the GPU power draw and here the RTX 3080 FE pulled 463 which was up at the top of the chart 89 watts above our 2080 Ti Founders Edition. 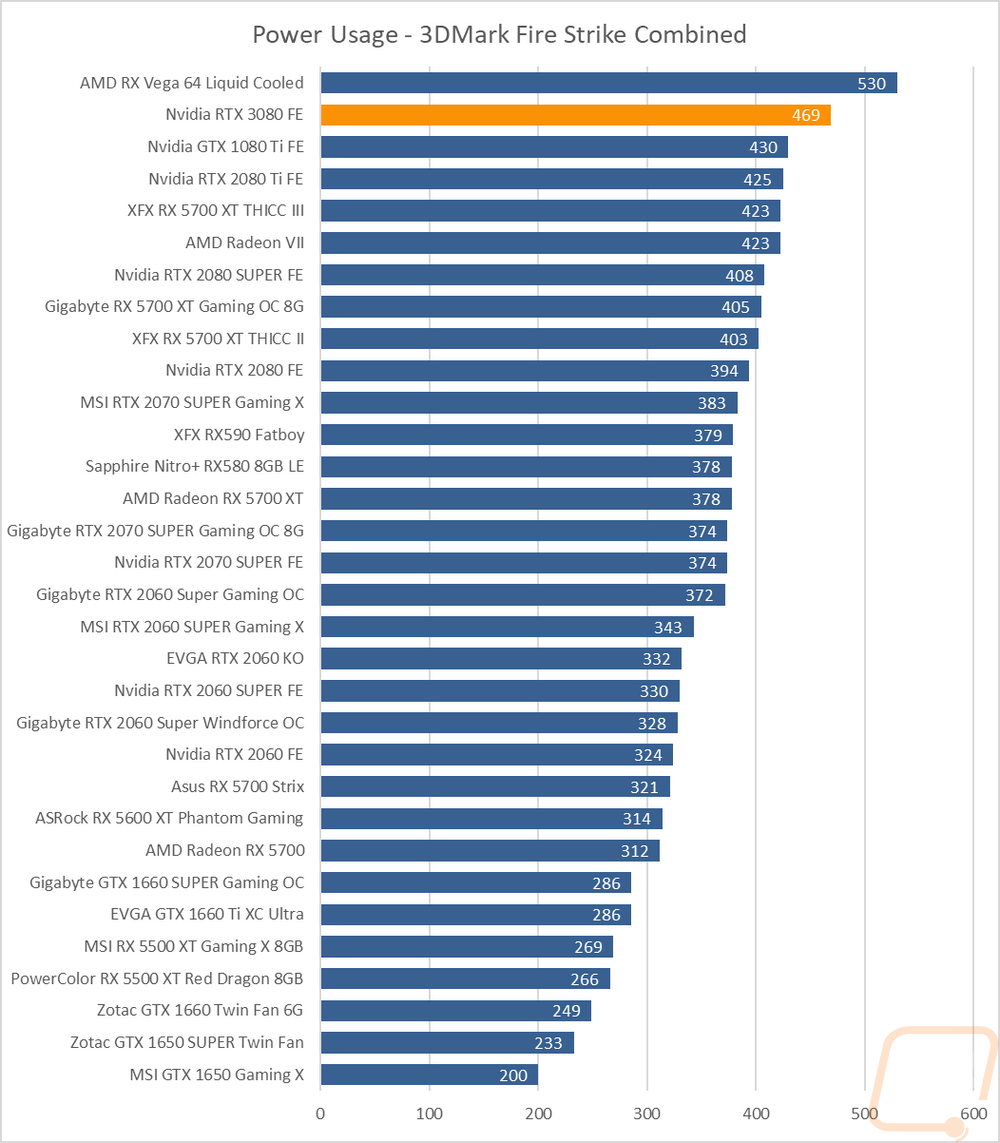 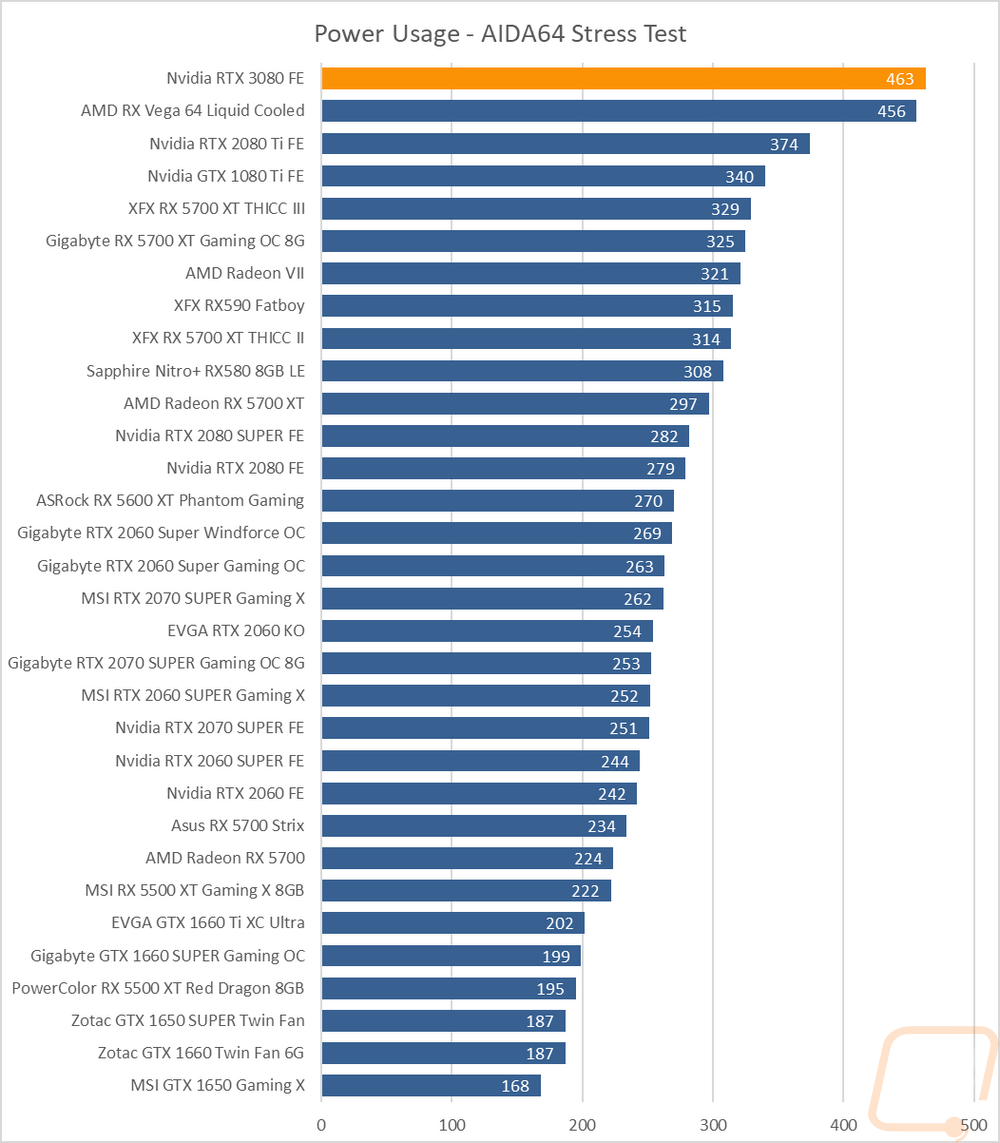 For noise testing, I wanted to take a look at a few different aspects. I used our decibel meter setup 18 inches away from our test bench and tested both 50% and 100% fan speeds just to get an idea of the noise range you can expect from the cooler. I was really curious what the unique fan layout would mean for noise, especially compared to the 2080 Ti with its dual fans and the older blower Founders Edition cards as well. With the fans cranked up to 100% the RTX 3080 Founders Edition did well, coming in in the idle of the chart at 58.5 decibels. The 2000 series dual-fan cards were a touch higher and the old blower cards can be found up at the top. The 50% fan speed result was good as well at 38.9 decibels. Taking a look at the fan RPM chart you will notice one interesting thing. Unlike last generations' dual-fan Founders Edition cards, this new design runs the fans at two different speeds at full tilt. The fan over the PCB runs at 3801 RPM which is 100 RPM faster than the RTX 2080 Ti FE had both of its fan running. Then the unrestricted end fan that blows through is turned down to 3401 RPM. My last noise test was when I had the RTX 3080 in AIDA64 under the stress test running for over a half-hour. I tested the noise level of the card on the stock fan profile under a heavy extended load and you can see that it is significantly quieter than the 100% fan speed results but a touch above the 50% which put the card up above almost all of the aftermarket cards but well below the blower cards like the RX 5700 and XT as well as the GTX 1080 Ti FE. The 2080 Ti FE was also a little louder here at 42.1 dB as well. 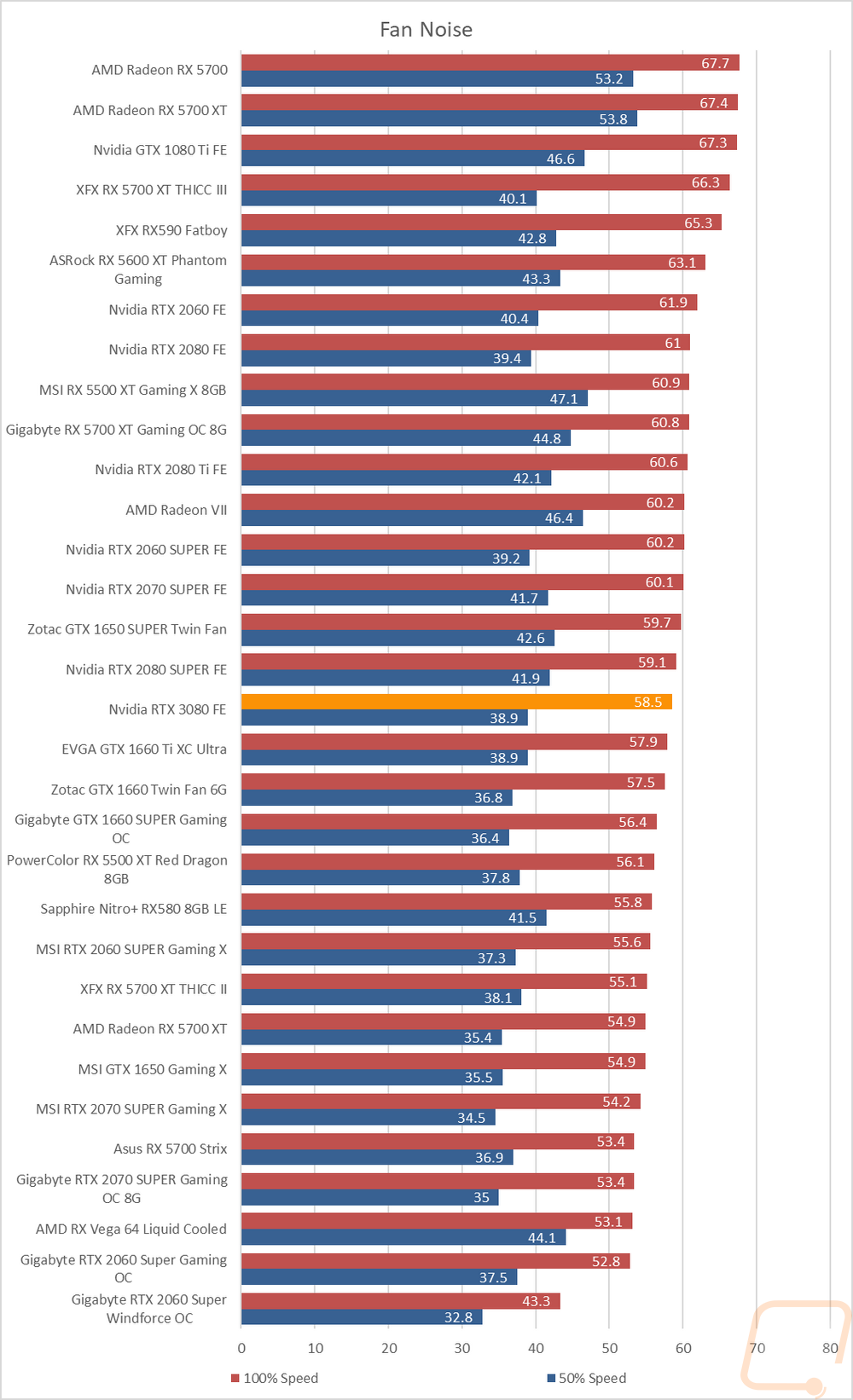 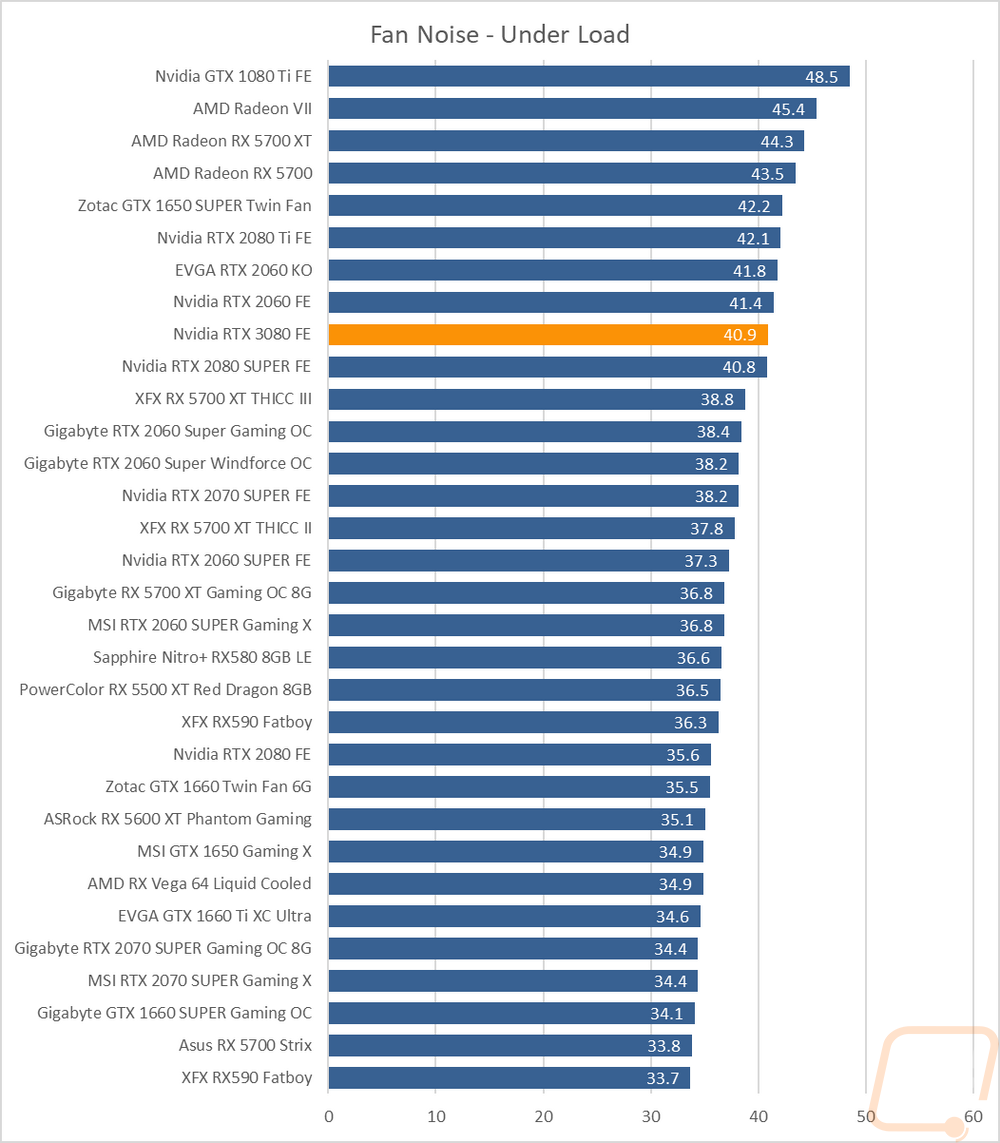 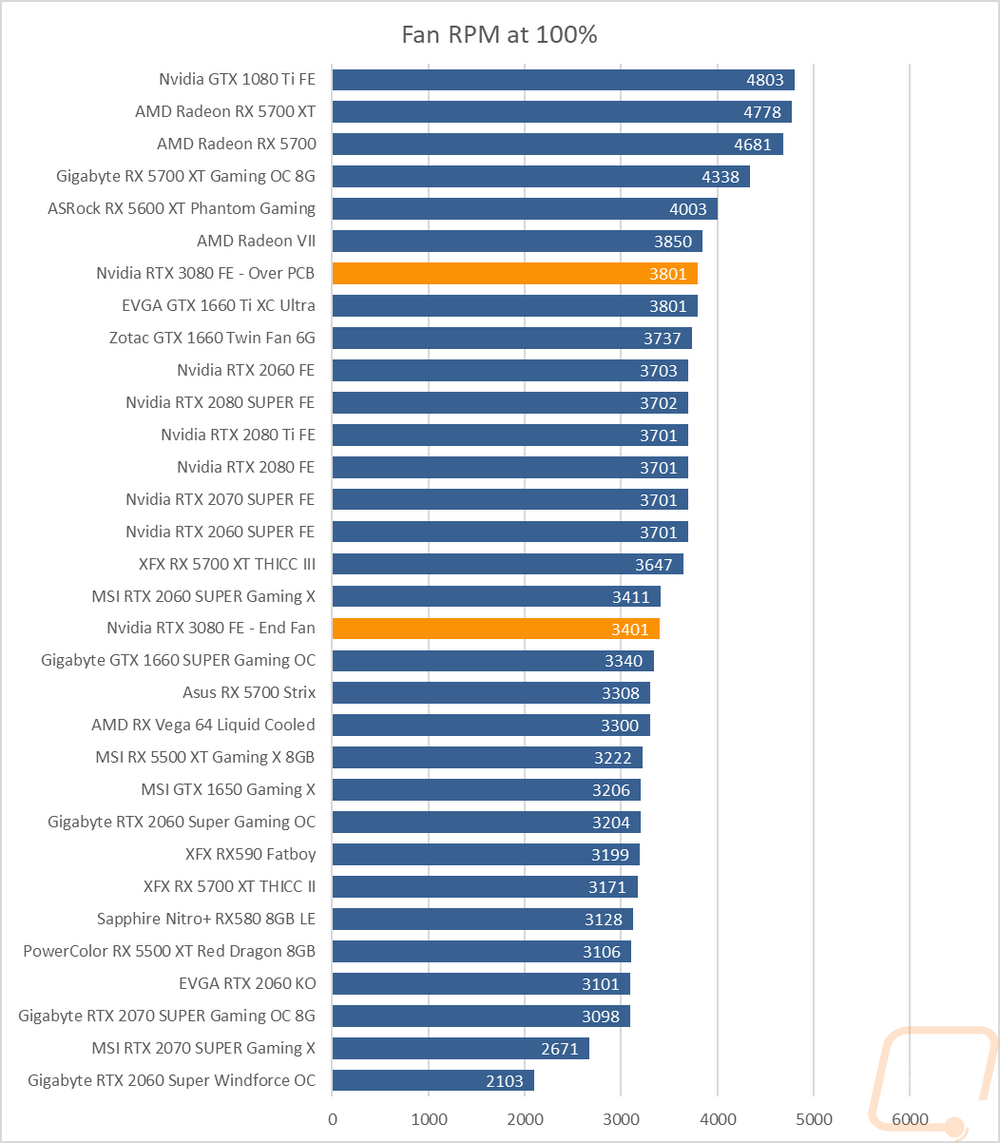 The last round of testing is of course the most important in my opinion. I wanted to check out the cooling performance of that unique cooler design combined with what has to be a high thermal load given the RTX 3080’s power usage. For this, I ran AIDA64’s stress test on the GPU for over a half-hour until temperatures leveled off to document the recorded temperature at the GPU. I did this twice, once with the stock fan profile, and then again with the fan at 100% fan speed to get an idea of the delta between the stock profile and the coolers potential to see how much room is left in it as well. The stock fan profile wasn’t a huge surprise, it was running at 77c which is up in the normal range that Nvidia has their cards set to run, although the last generation of cards did run a little cooler as you can see with the 2080 Ti FE running at 73c in the same test. With the fan cranked up temperatures were a lot better with the end result being 58c. This isn’t as low as a lot of the aftermarket cards tested landed but we will have to see what the aftermarket versions of the RTX 3080 do here in the future. But the delta between that 77c stock profile result and the 58c 100% is a good amount which is at least good to know if you do some overclocking the stock cooler does have some headroom. 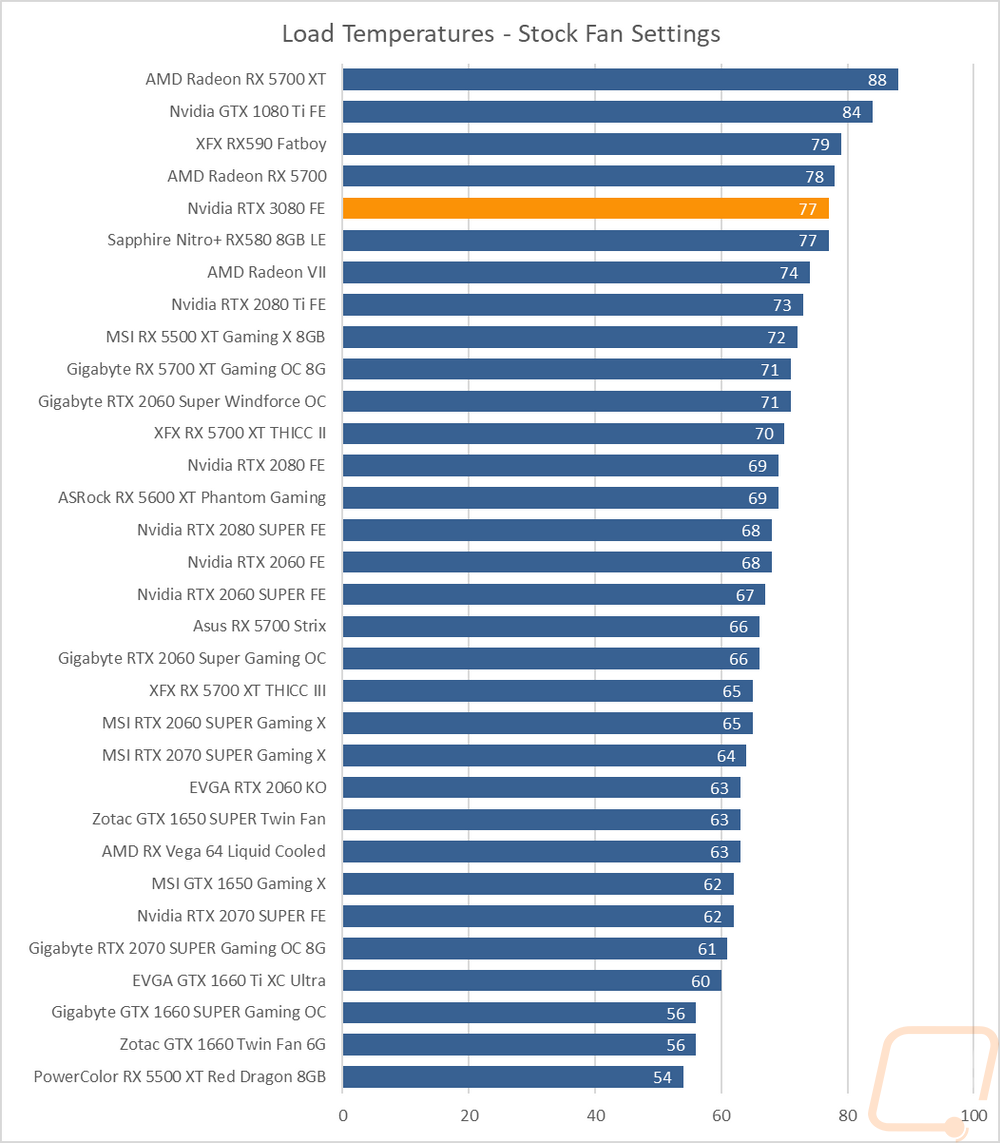 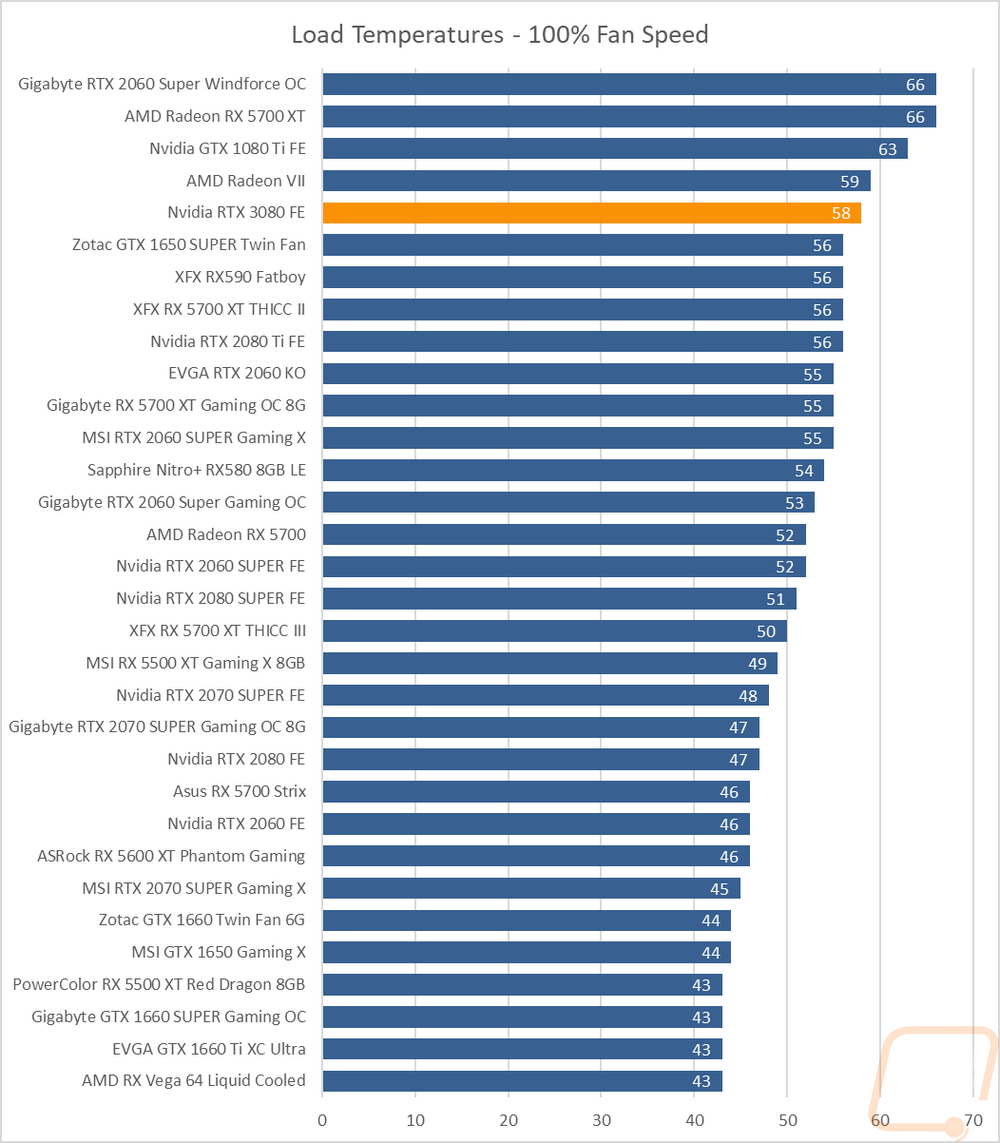 So this picture is actually from Nvidia’s original presentation and a lot of you may have seen it., But I did want to include it here because there is one aspect of the unique cooler design that people will need to keep in mind. I love that they have half of the card blowing out the back PCIe bracket to keep that extra hot air out of the case and with aftermarket cards and even last generations Founders Edition cards we have gotten used to having most of the hot air from a card blowing into your case. This design even completely avoids that hotspot that ends up on the motherboard where a lot of cards blow down on to it. But if you are running air cooling, you need to remember that your GPU is going to be blowing up right into the airflow for your CPU as you can see below. The 3080 Founders Edition works better in a case layout that is running an AIO or custom water cooling where that airflow is free to go out the top or back. So keep that in mind when layout out your PC. 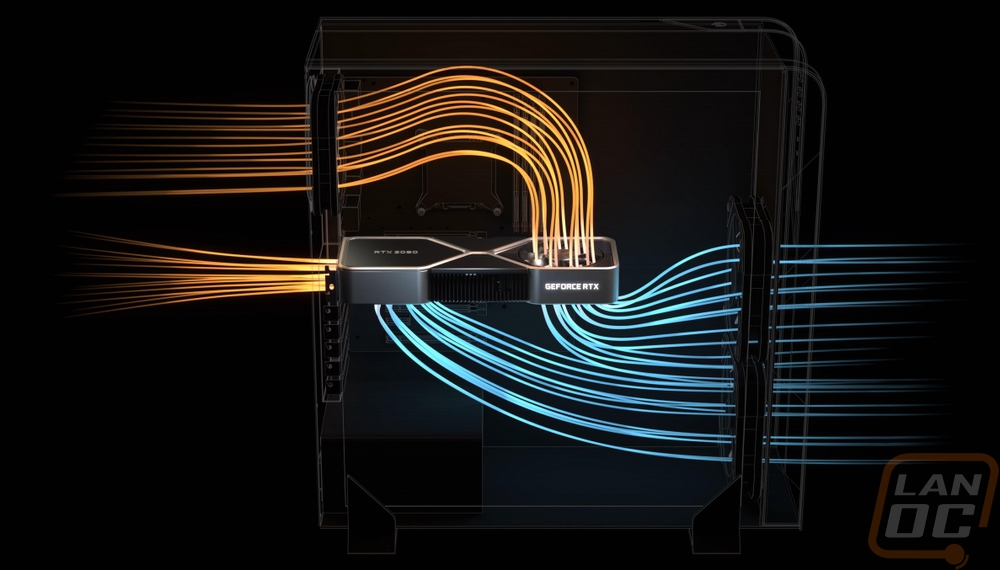 I did also get some thermal images of the RTX 3080 Founders Edition when running the stock fan profile testing. These give an interesting look at the heatsink temperatures as well. You can see how that end section is cooling things down with the pull-through fan on that end. But you can also see where Nvidia is doing a good job of pulling heat out across that heatsink even with the PCB being far away from there. The hottest area is right at the top edge at the PCB which is in between the VRMs and right above the GPU itself. There is also a hot spot on the back at the back of the PCB where the GPU is as well. 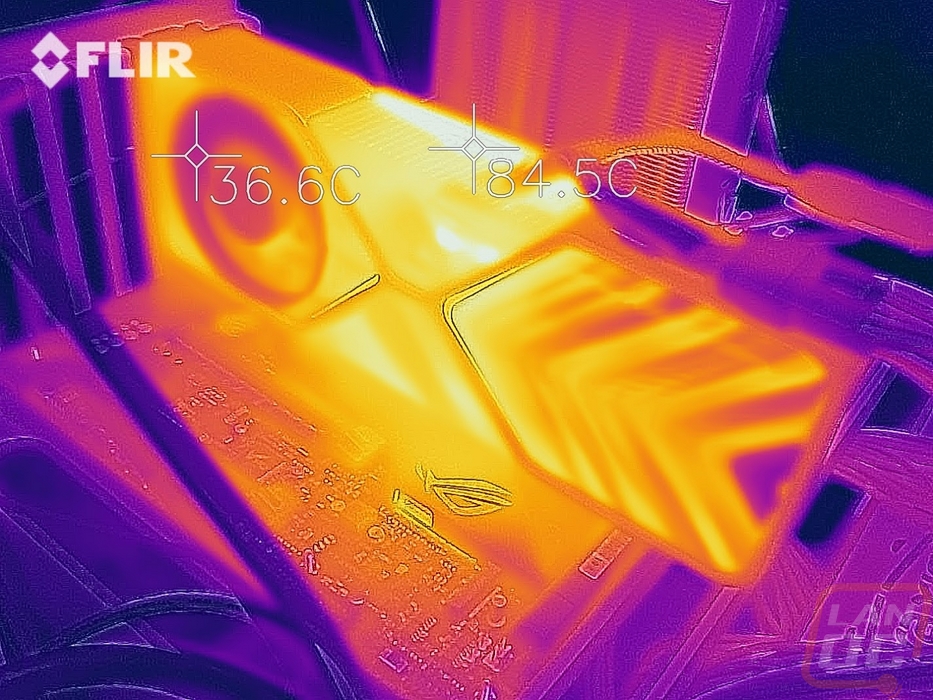 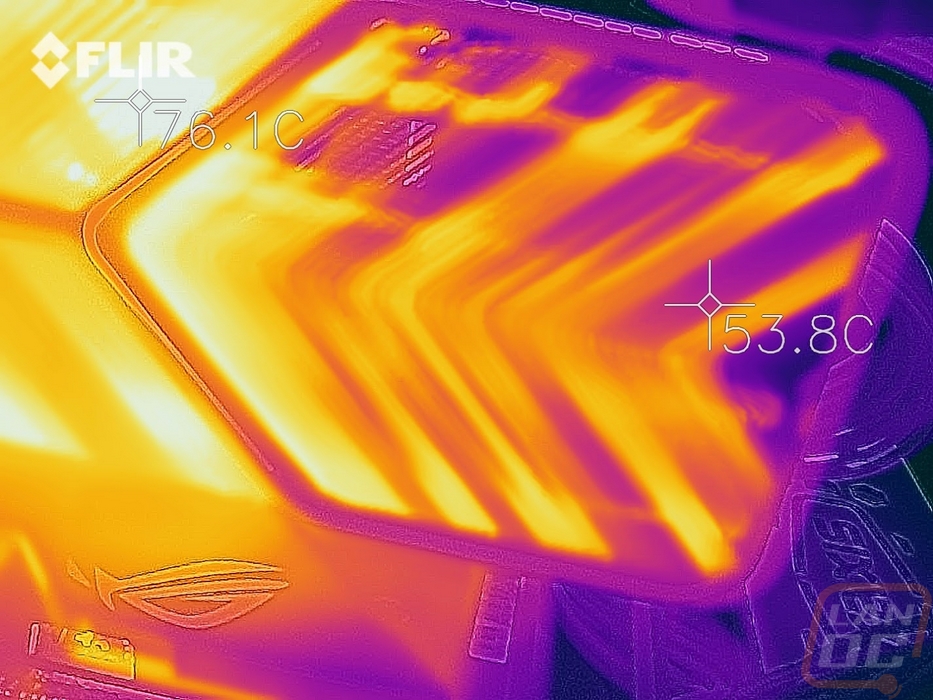 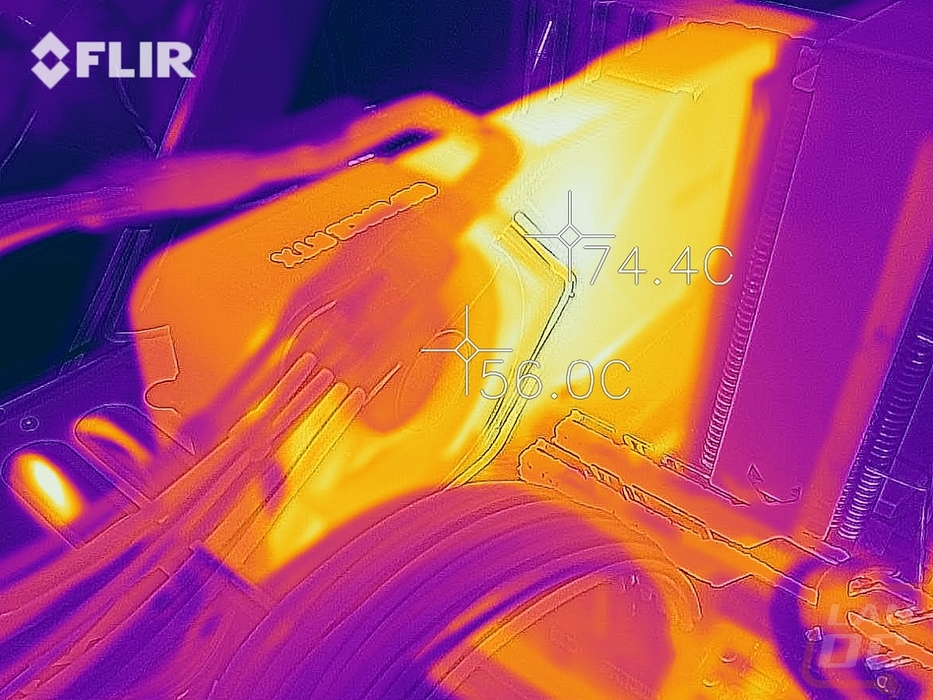 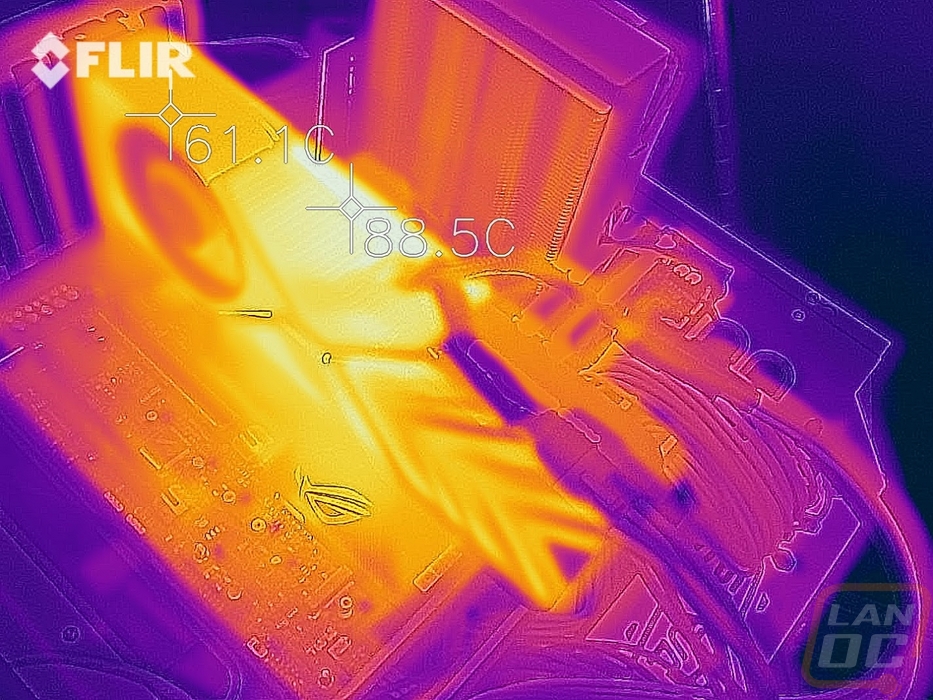