With all of the testing out of the way, we can finally sit down and run through what XFX has going for them on the RX 5700 XT Thicc II Ultra and what issues the card has. Now once you get past the name which with the spelling of Thicc and the addition of Ultra is a little weird, not to mention extremely long. The Thicc is actually a great looking card. XFX redesigned their lineup once again and they managed to come up with a design that is simple and clean but is also unique. The end looks like a classic car grill and the touches of chrome also fit that theme as well. I do think this might be the best looking 5700 XT on the market or at least one of them. Not using RGB lighting was a nice touch, in my opinion, there are lots of options who pack in lighting but few will skip it altogether.

Of course, that same fan shroud is also a source of a lot of the cards issues. One being that they used way too much plastic. But to go with that, the card is huge. Every single dimension is bigger than it needs to be which is of course where the Thicc name came from. But if we are going this big I really want every little cubic cm inside the shroud to be filled with GPU cooling heatsink and they didn’t do that. There is a big gap right in between the two halves of the heatsink and there was room to fit more cooling power in lots of the shroud. The shroud also plays a role in limiting airflow at the top and bottom. All of this leads to cooling performance that I think could have been better, especially with this being a flagship card.

Now the rest of the performance wasn’t too bad though. When comparing the Thicc II Ultra to the AMD reference RX 5700 XT it outperformed it in all of the gaming and synthetic benchmarks. Helping edge the card up even higher when compared with Nvidia’s SUPER lineup. The cooling issues did seem to hold things back on longer term compute benchmarks though where the Thicc didn’t do as well. The RX 5700 XT was already a little power hungry and overclocking it didn’t help that. It also didn’t do too bad in noise testing though cooler improvements could help it be even quieter. Overall though this is still a great performing card for gaming at 1440p or high refresh rate 1080p.

As for pricing, the MSRP is $449.99 which puts the Thicc II Ultra up near the top end on the 5700 XT market. Currently you can find it a little cheaper on Amazon though. At the MSRP I think the XFX is a little under-gunned. Being a top end card means top end performance and it is a little lacking on the cooling performance. I would also love to see them potentially bring back more metal in the shroud design and cut down on the size unless it is needed. You are getting a great looking card and performance is still really good. At the RX 5700 XT launch I loved the cards but the blower design was just horrible in noise and cooling. If that is your reference point the Thicc is a big improvement and it does make the RX 5700 XT marketable. I just think that the non-ultra model might be the more feasible one from XFX or the Ultra at the current Amazon prices ($433). But asking top of the market prices for a card with a few important flaws is a tough sell. 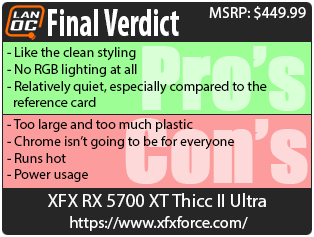 You might call him obsessed or just a hardcore geek. Wes's obsession with gaming hardware and gadgets isn't anything new, he could be found taking things apart even as a child. When not poking around in PC's he can be found playing League of Legends, Awesomenauts, or Civilization 5 or watching a wide variety of TV shows and Movies. A car guy at heart, the same things that draw him into tweaking cars apply when building good looking fast computers. If you are interested in writing for Wes here at LanOC you can reach out to him directly using our contact form.
Discuss this article
Log in to comment
Posts in discussion: XFX RX 5700 XT THICC II Ultra

We have 1100 guests and one member online