So how did the XFX RX 5700 XT Thicc II Ultra perform? No surprises at 1080p, nothing I tested would be considered any less than silky smooth with half of the results being in the 60-119 range and the other half being up over 120 FPS. High refresh rate monitors with high detail levels on modern games should be good here. Turning the resolution up to 1440p you can see the high refresh rate section drop, but 10 games are over 60 FPS, one is over 120, and just three are in the 30-60 range. The 5700 XT Thicc II looks to be perfect for 1440p gaming, some ultra-demanding games you may have to adjust slightly, but you won’t have trouble playing anything. Then at 4k, like in our synthetic testing, you can see the drop-off. That said I was still surprised that everything but one result would be considered playable. 4 games are over 60 FPS and a majority (9) are in the playable but not perfect range. So if you game at 4k with this card you can expect some lower framerates with modern games with a few at medium detail settings still being nice and smooth. “esports” titles and older games, however, should be solid at 4k. Overall I would aim for 1440p, but 4k could be do-able with lower detail or lesser demanding games.

As always I also have ALL of the actual results which are 14 tests run on 17 cards at three resolutions. That’s a lot of data to take in, so you might be as crazy as I am if you are sorting through it. But what will you find? Like with the synthetic tests I was mostly curious where the Thicc II Ultra compares with the Reference 5700 XT and how it compares with the 2060 SUPER which is also in the same price range. With the exception of one of the Far Cry 5 results at 1080p, the Thicc II Ultra was faster than the reference card in every other test and at each resolution. There are a few where they are basically the same FPS, but overall you get 2-6 FPS at 1080p and 1-3 FPS at 4k with the overclocked card. As for comparing with the 2060 SUPER, the 5700 XT Thicc II Ultra was always faster than even the highest overclocked 2060 SUPER. In fact in 8 of the tests it was running above the RTX 2070 SUPER and in a lot of the tests it didn’t, it wasn’t far behind at the lower resolutions, 4k not so much. This is similar to what I found with the 5700 XT at launch, but now with a little extra bump with the overclock XFX provides. 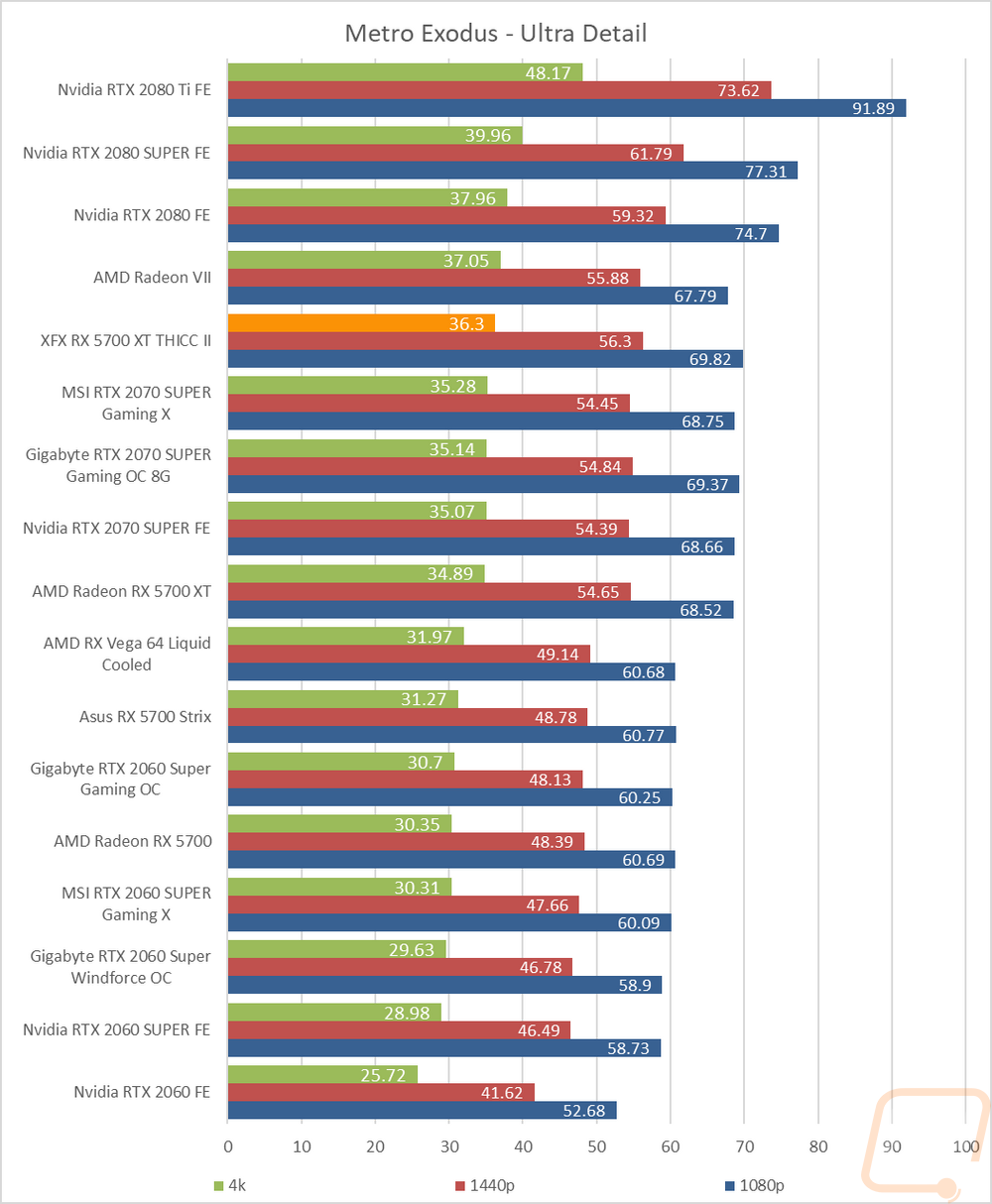 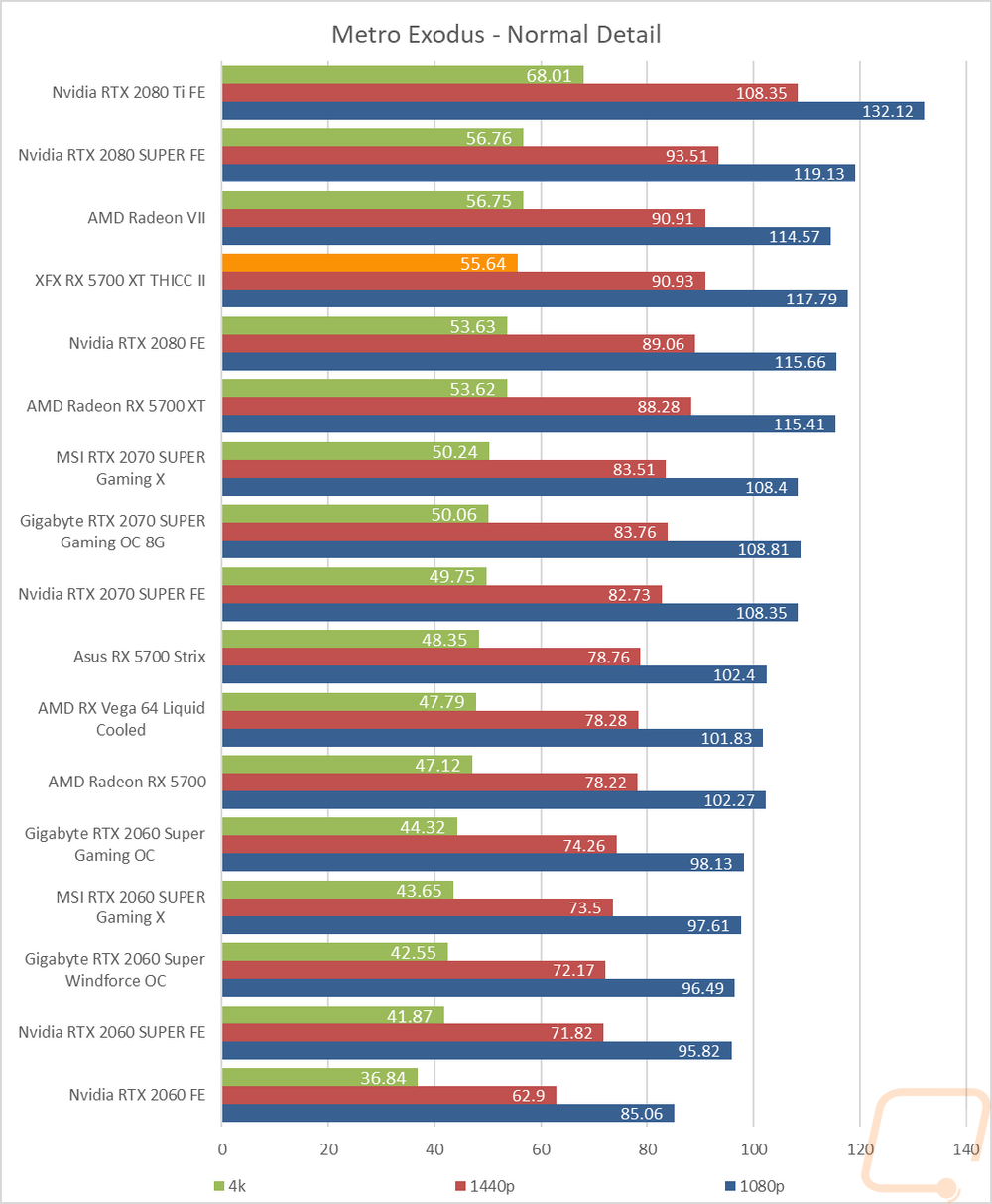 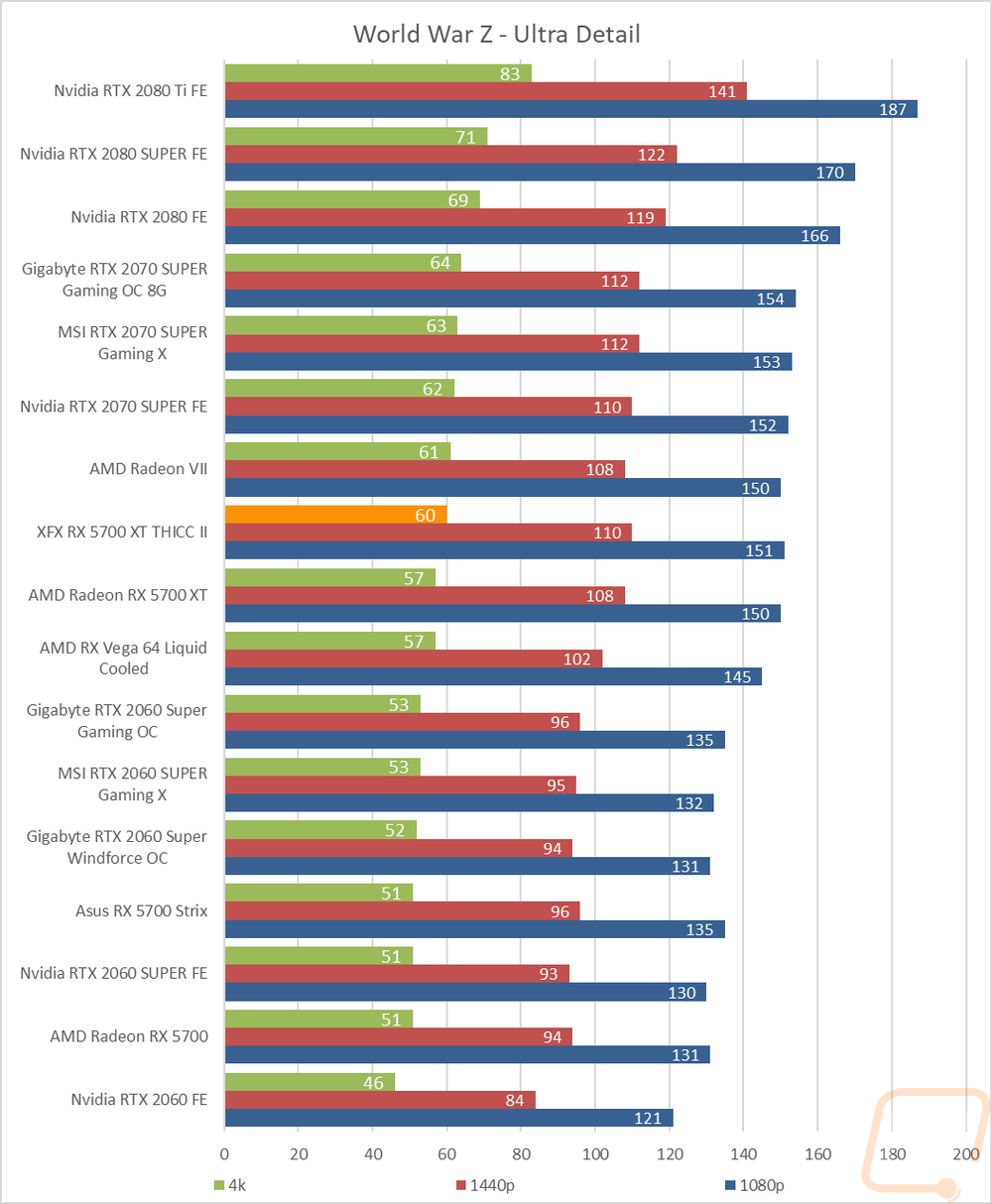 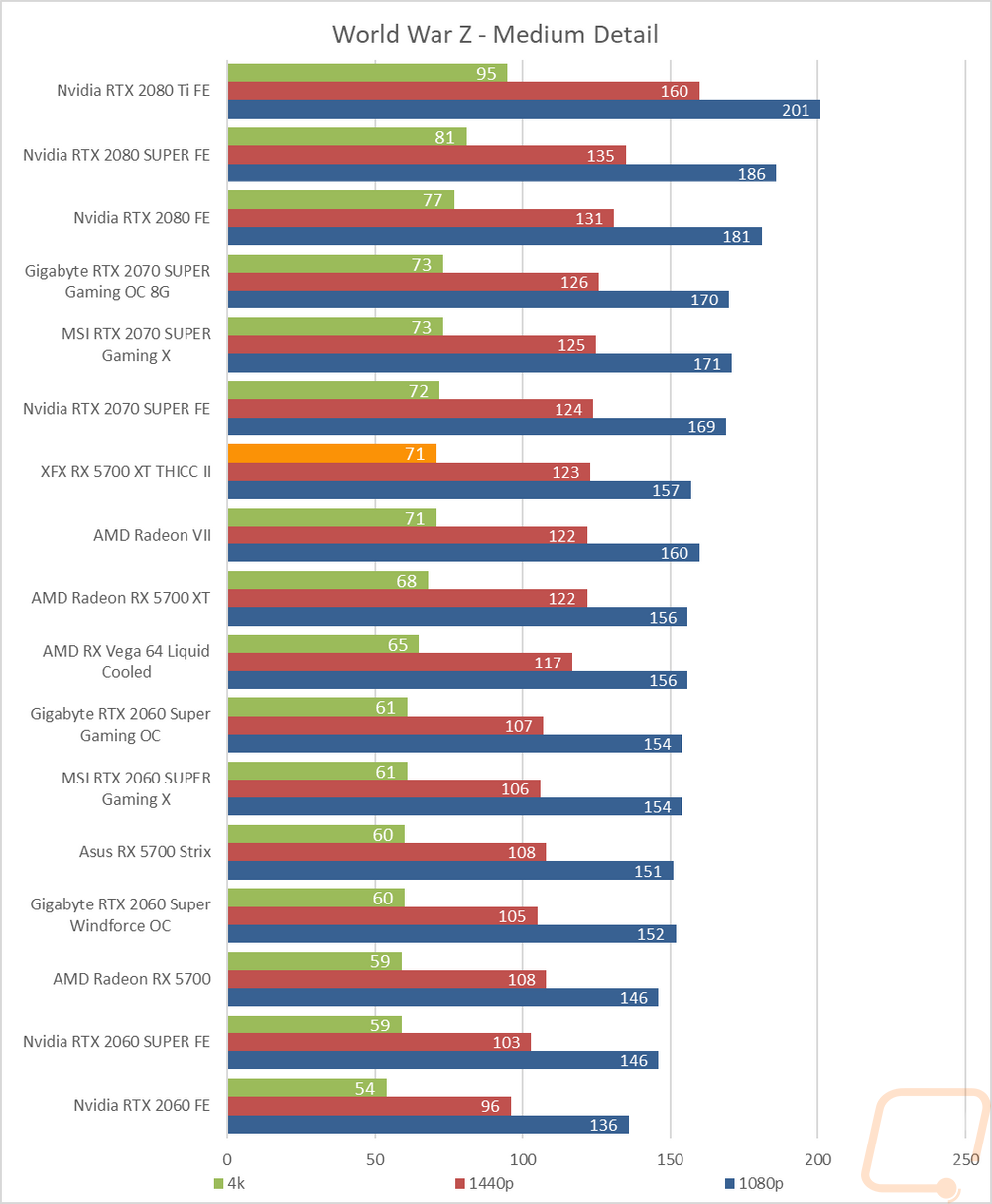 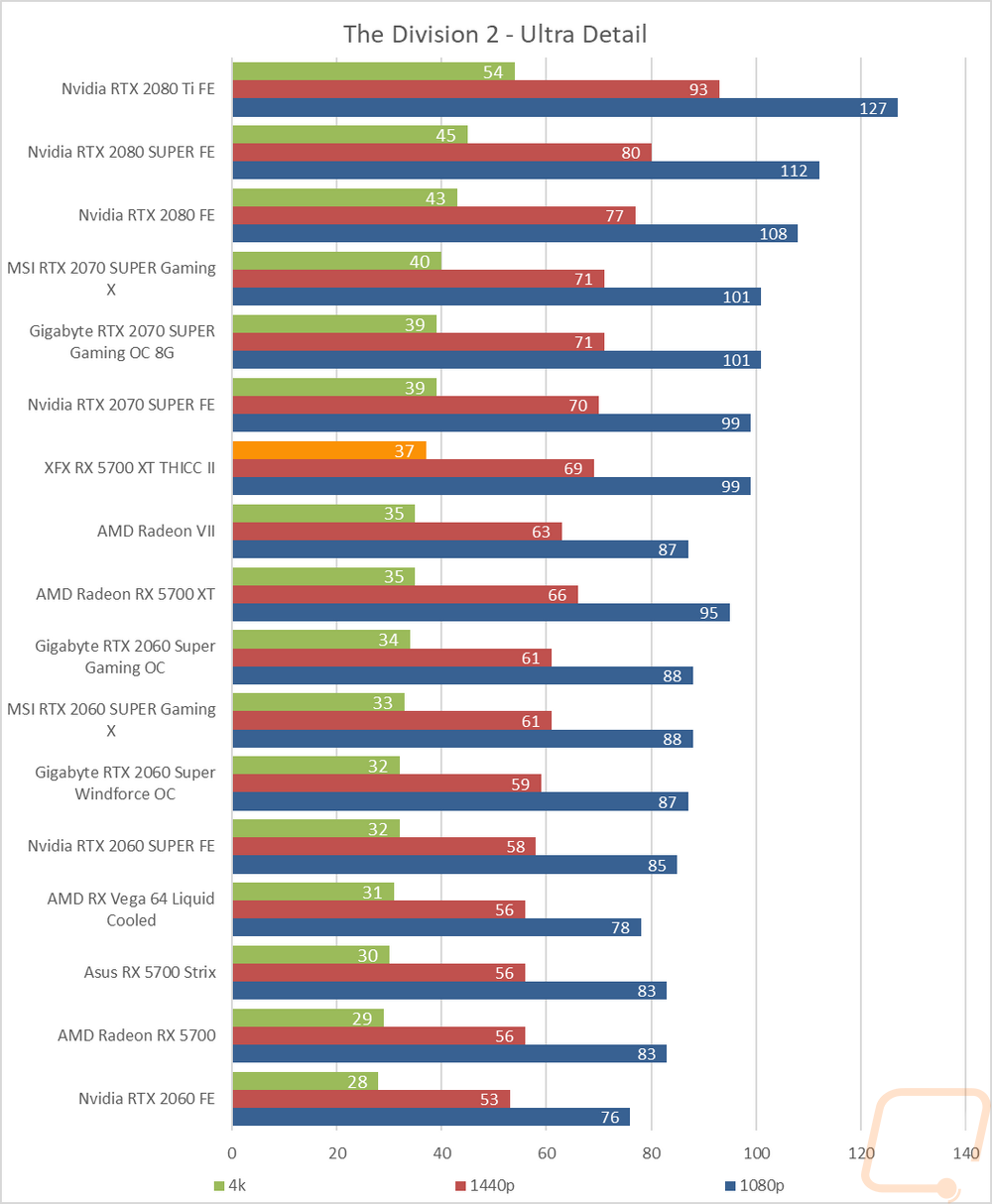 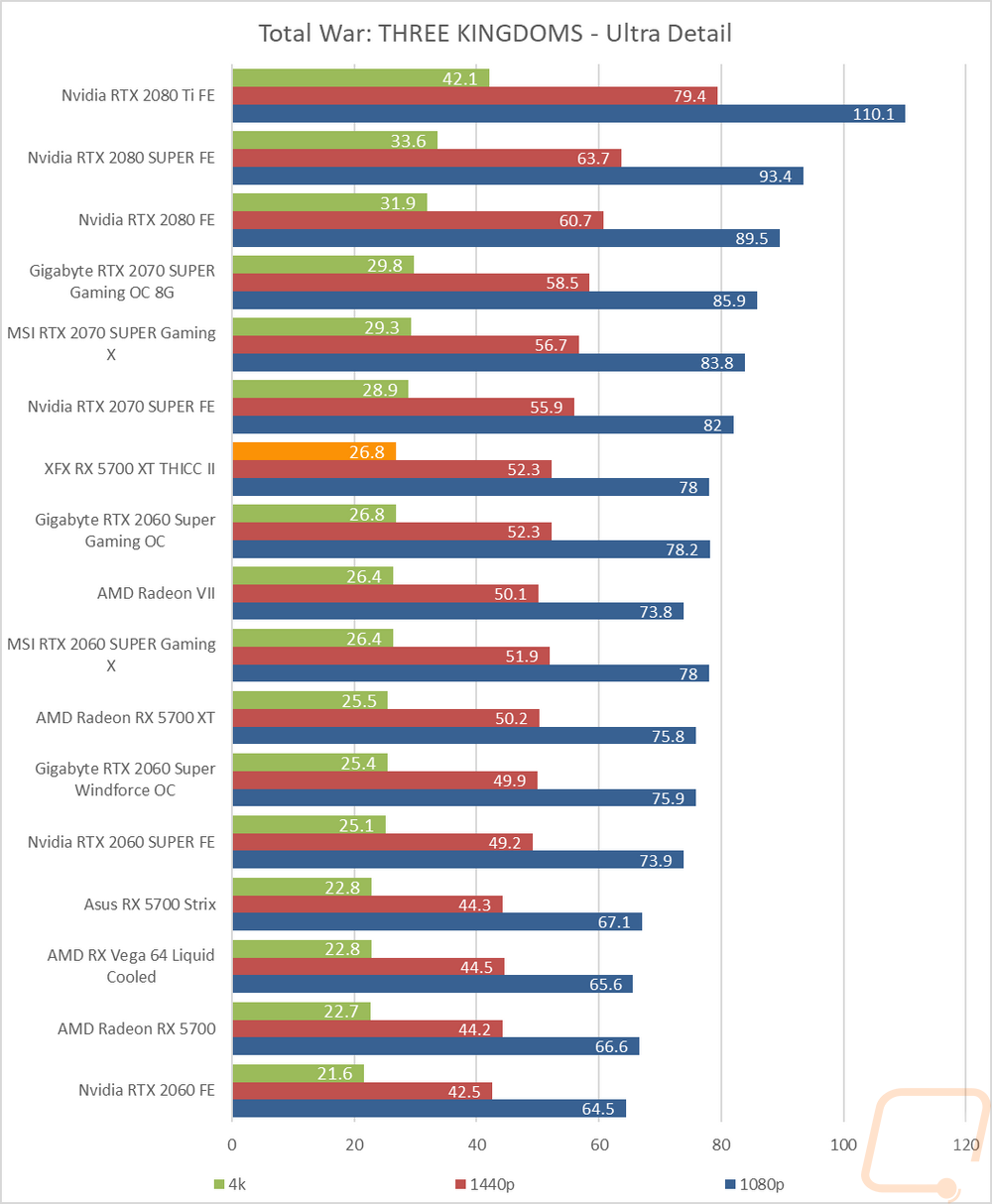 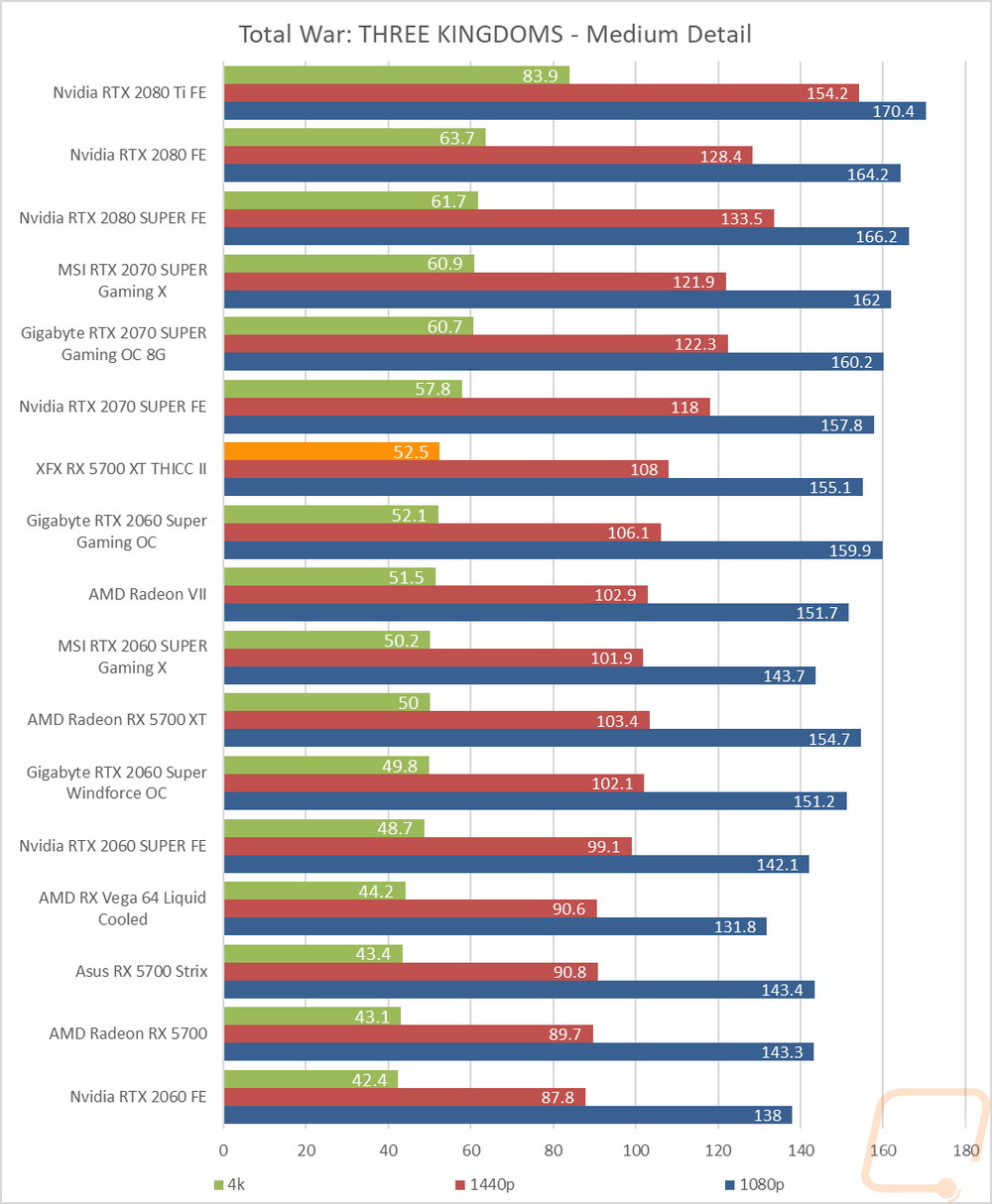 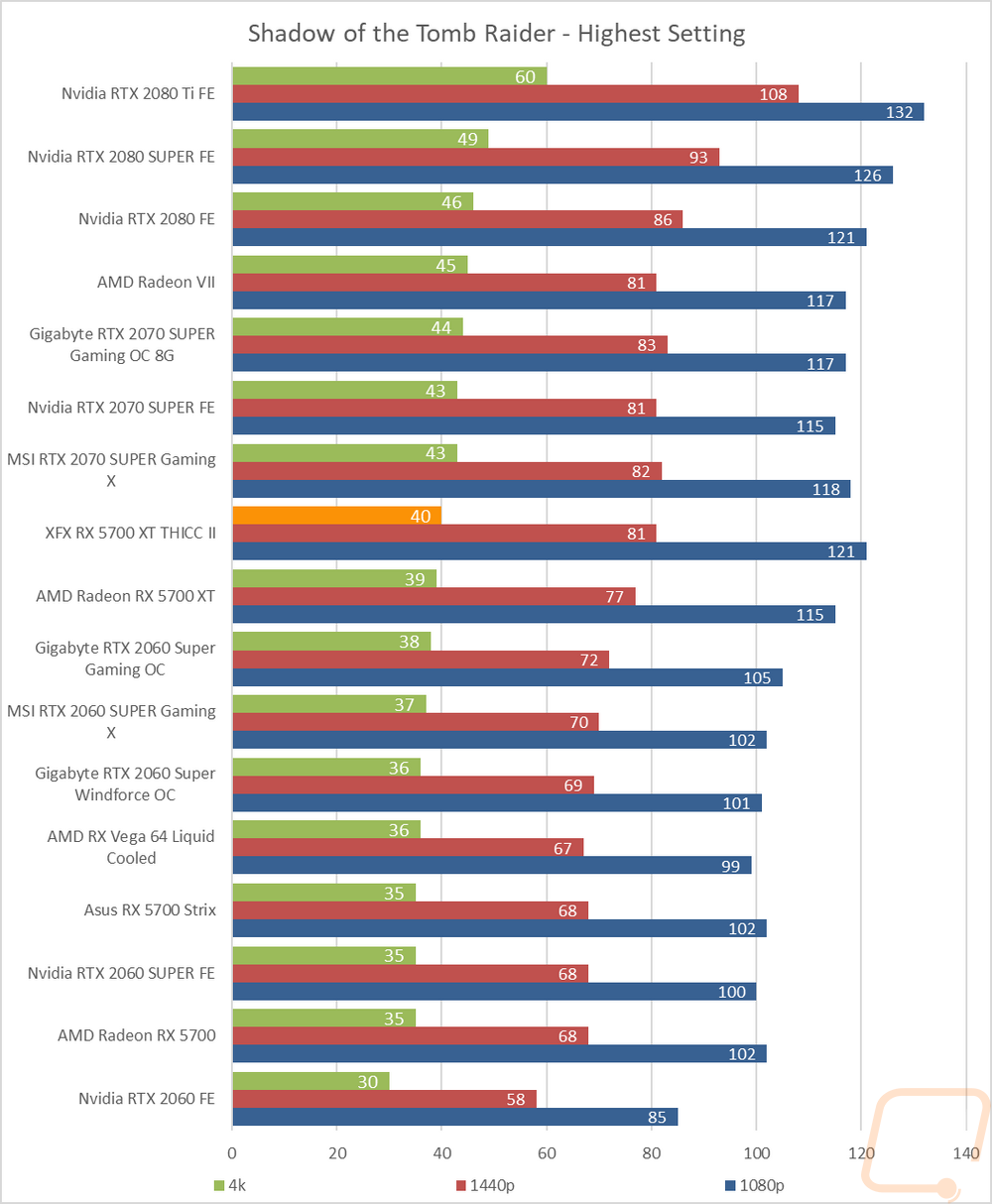 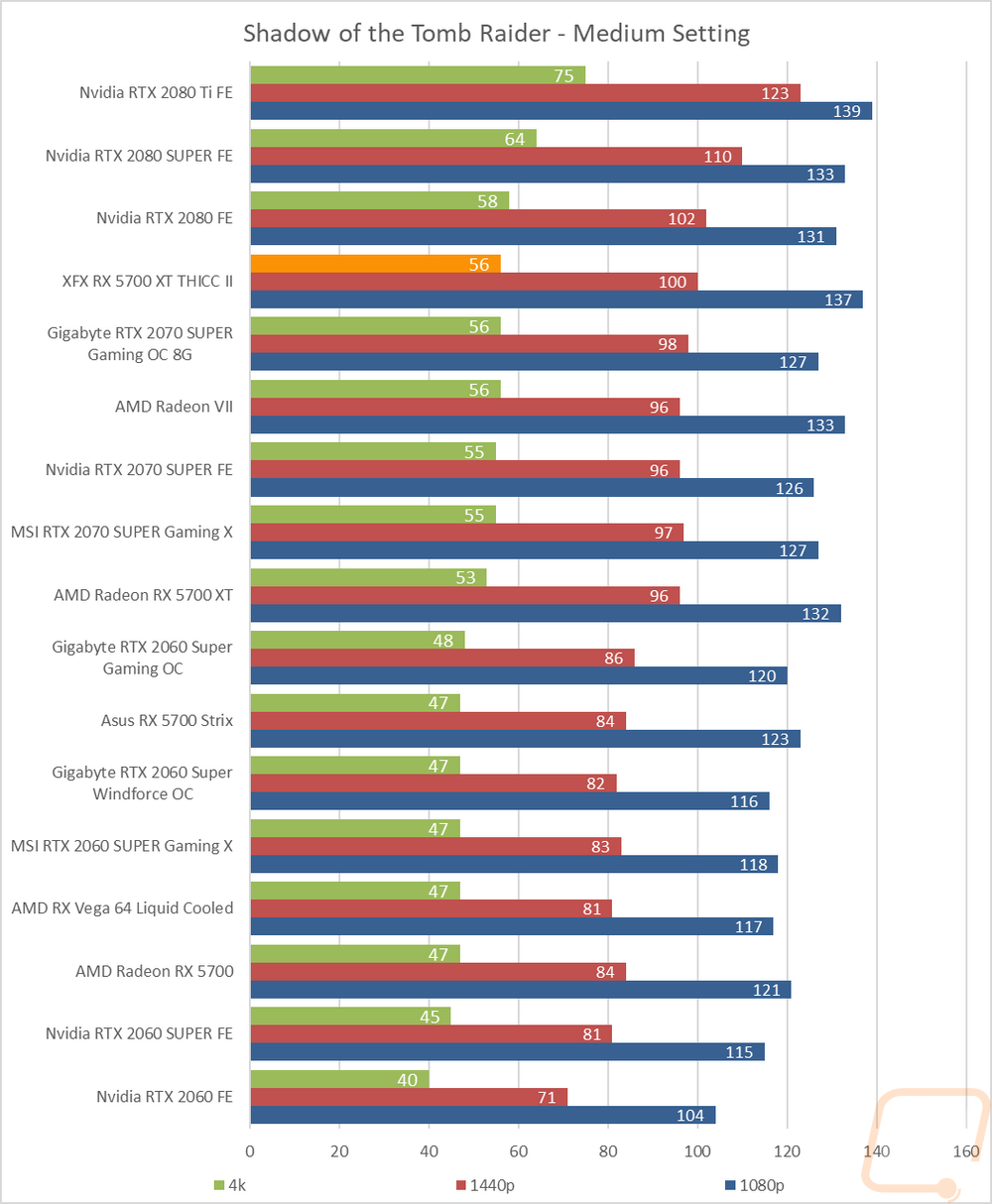 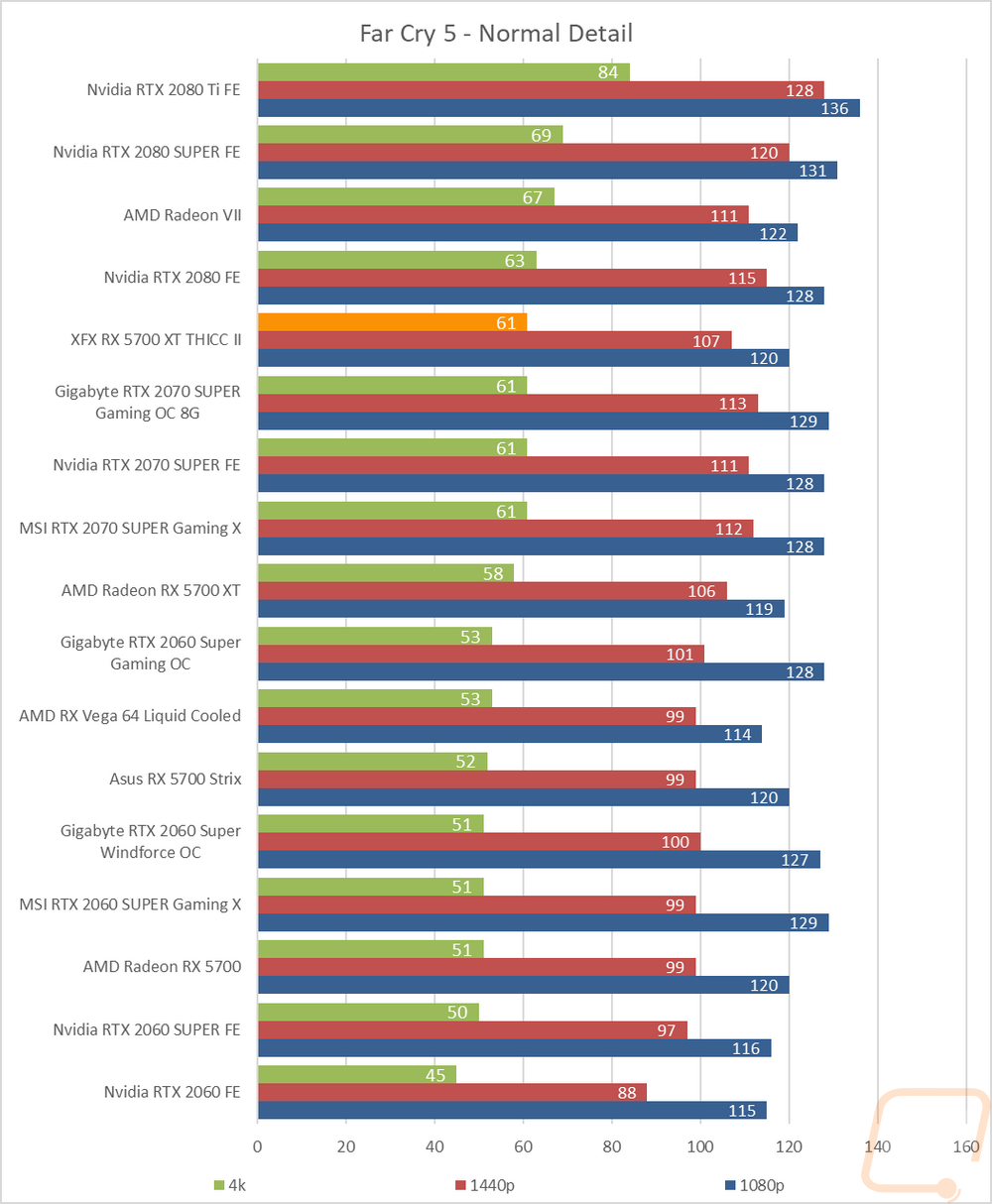 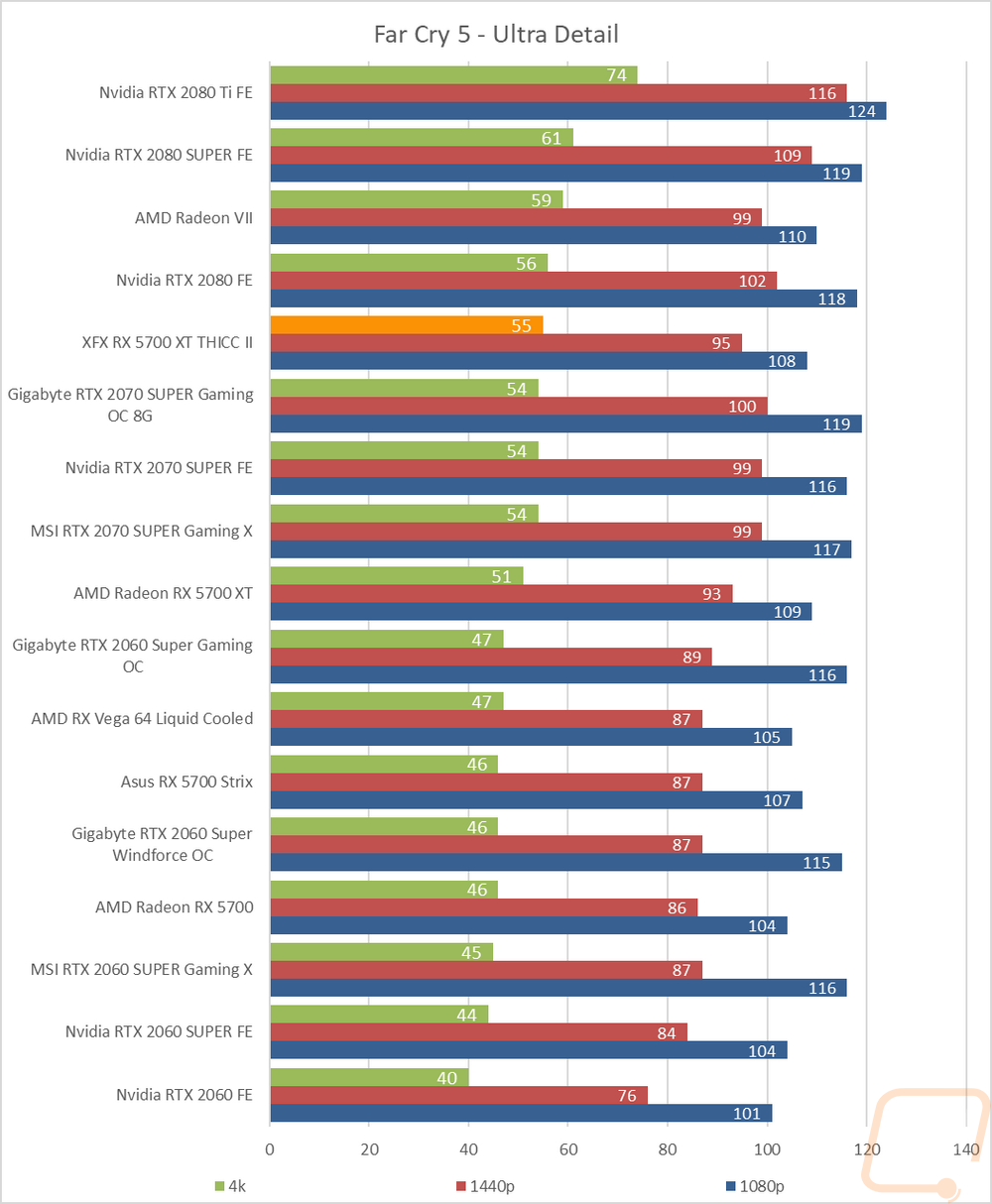 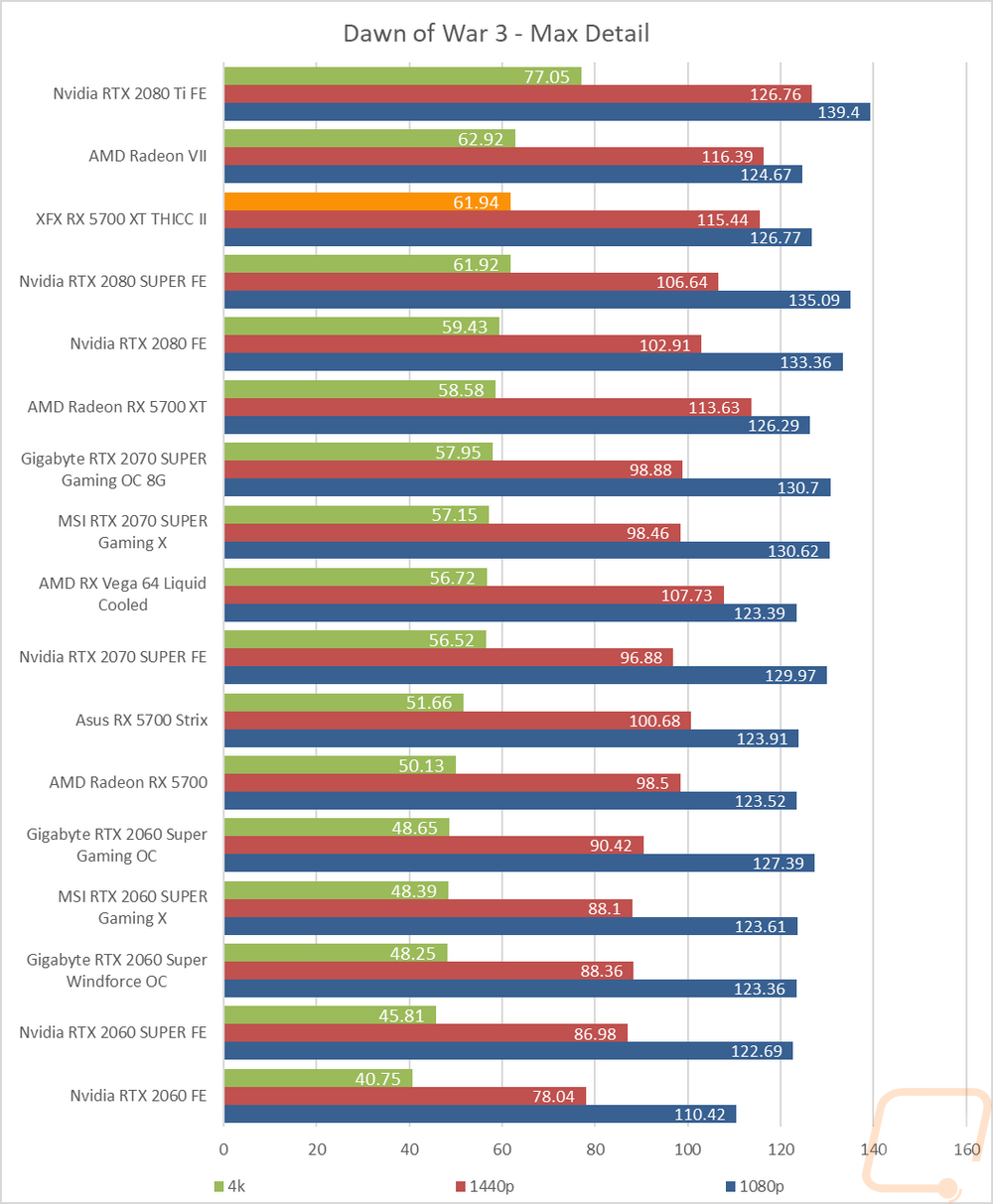 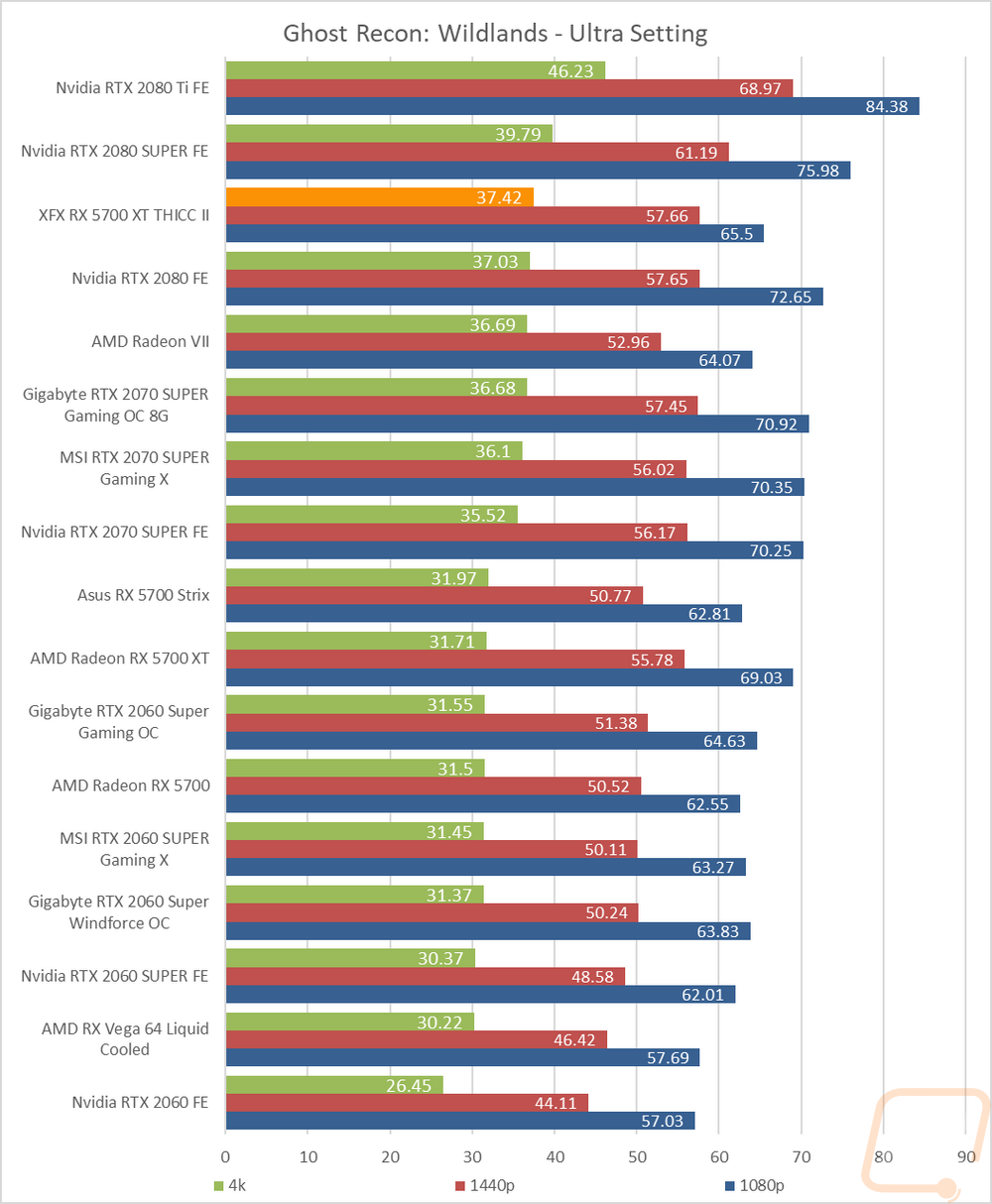 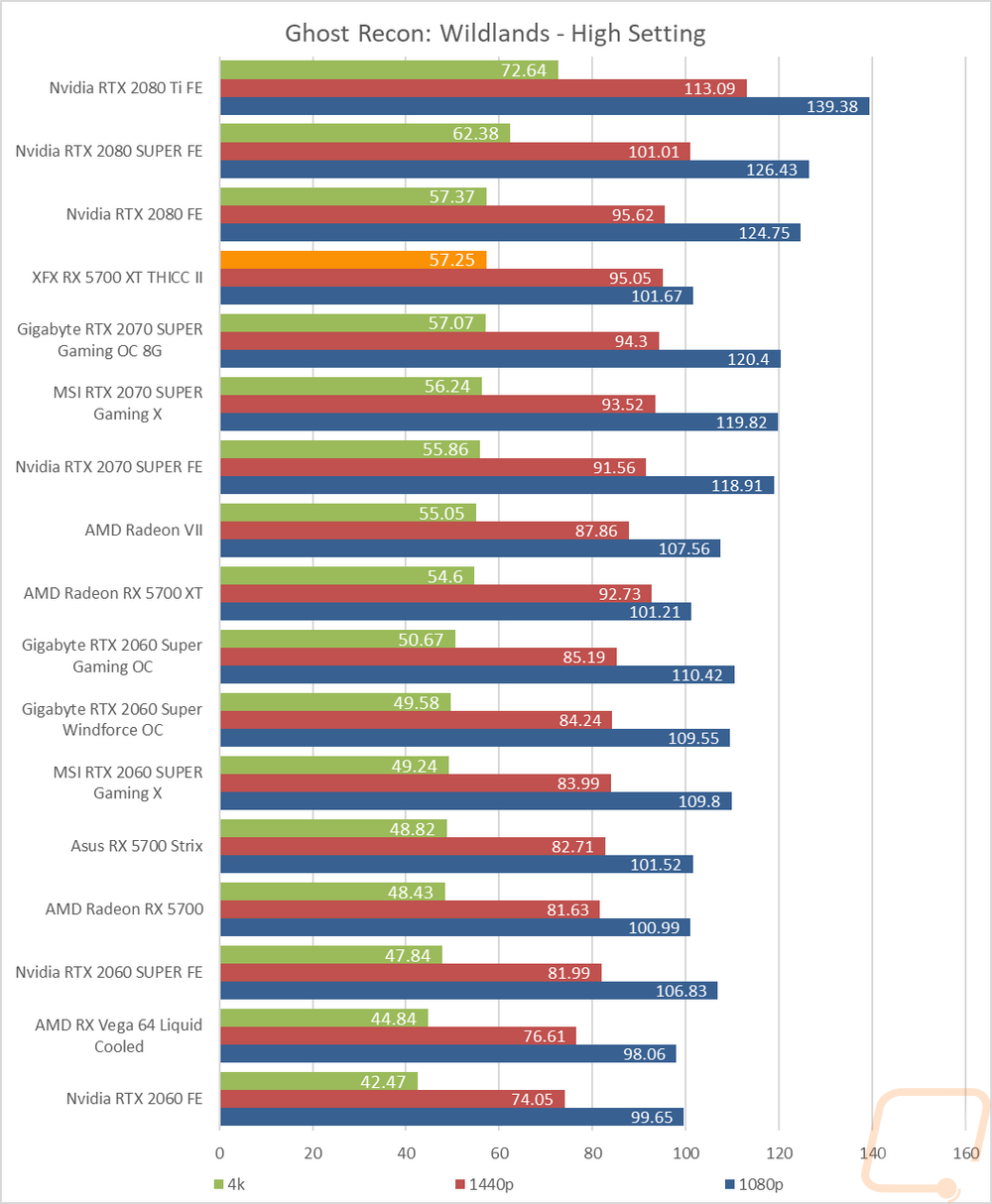 We have 1293 guests and no members online