My last round of testing is also one of the most important when you have already decided which GPU you want and you are comparing between different models available. Obviously overclocks make a difference as well, but cooler design and how the card is overclocked plays a big role in temperatures, noise levels for the fans, and power usage. So here I’m going to take a look at those aspects. First, though I wanted to check out the power usage. For this, I ran two tests. On both, I monitored the power usage of our test system using a Kill-A-Watt. To put things under load I first use 3DMark to replicate a gaming load on both the CPU and GPU. For the 3DMark test the XFX RX 5700 XT Thicc II Ultra pulled 393 watts which was 15 watts over the reference 5700 XT. It's also important to note that this also puts up over even the overclocked RTX 2070 SUPER as well. The reference RX 5700 XT didn’t exactly pull low wattage so a bump, even small does put it right with the RTX 2080 FE. The second test was using AIDA64 to put just the card under load. In this one it was 18 watts over the reference 5700 XT at 314 watts. This was also significantly up over the RTX 2080 FE and the RTX 2080 SUPER. 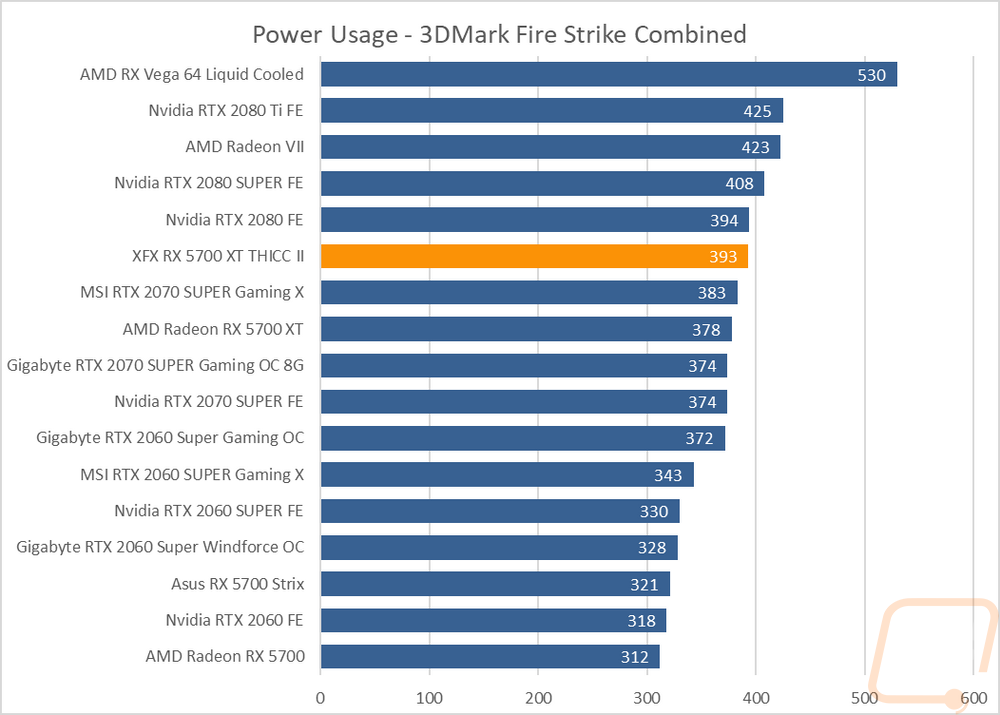 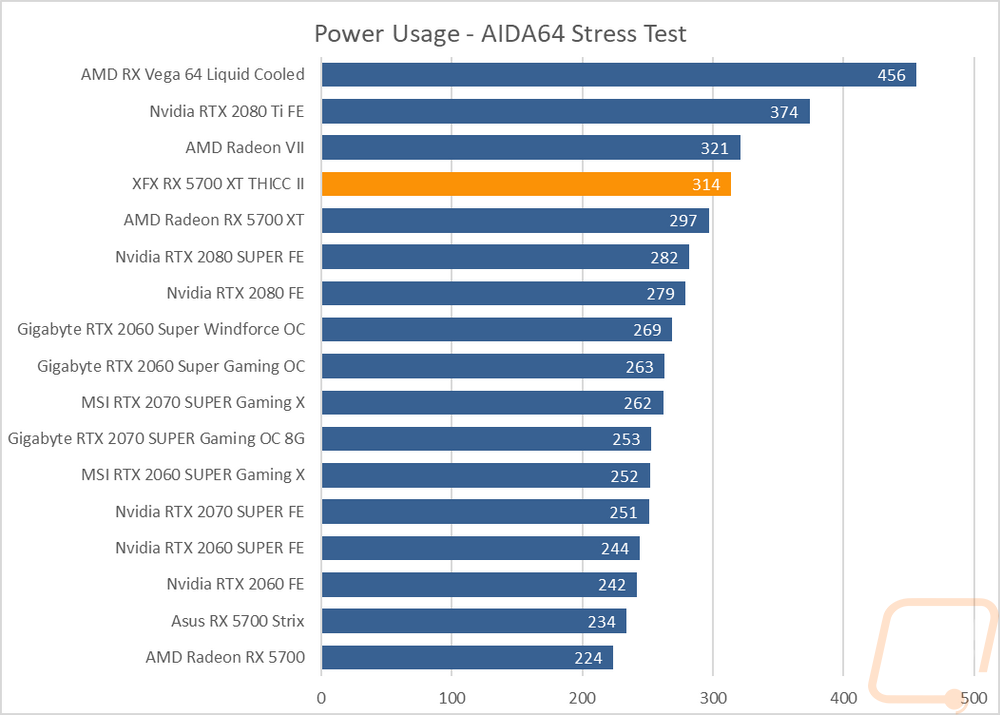 My next round of tests were all about noise, specifically the fan noise that the XFX RX 5700 XT Thicc Ultra put out. Now I will say before doing this review XFX did provide an updated BIOS which was focused on the fan profiles and the noise levels between the original and this profile were significant under load. Before getting into those though I did 100% and 50% fan speed tests to get an idea of the range of noise the card is capable of. Considering how loud the reference blower RX 5700 XT was anything would be an improvement here and the Thicc did just that. 100% fan speed came in at 55.1 decibels while at 50% it put out 38.1. This has the Thicc’s 100% noise levels a lot closer to the reference cards 50% numbers which is crazy. Of course, that is just what the card can do, for what it actually did I ran it for over a half hour in AIDA64 until the temperatures leveled off and documented the noise levels. It ended up at 37.8 decibels which means it is running a little less than 50% fan speed and this put it near the middle of our charts overall. The Founders Editon Nvidia RTX 5700 SUPER was right with it and there is still a lot of room to be quieter, but looking on the bright side still a big jump over the reference card.

I did want to point out though, normally the fan speed charts that have the RPMs listed almost perfectly match both noise level charts but the XFX was a little off. I suspect that this is because of the slightly limited airflow at the top and bottom of the card, per RPM it is louder. 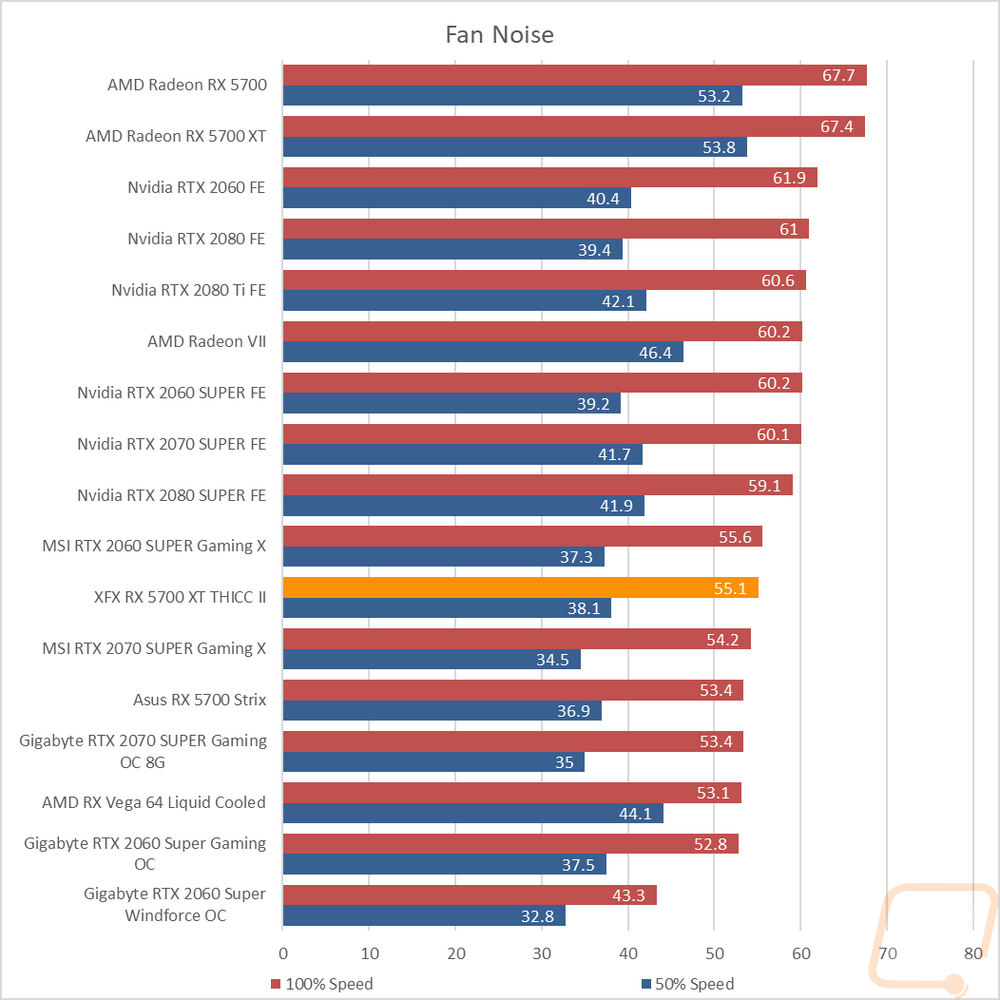 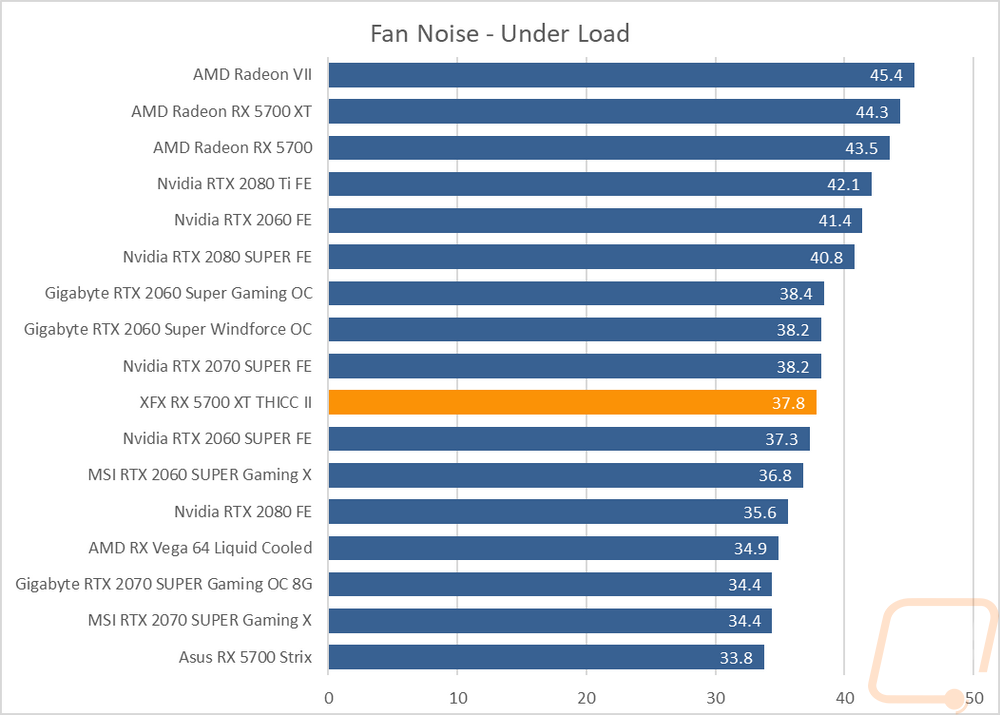 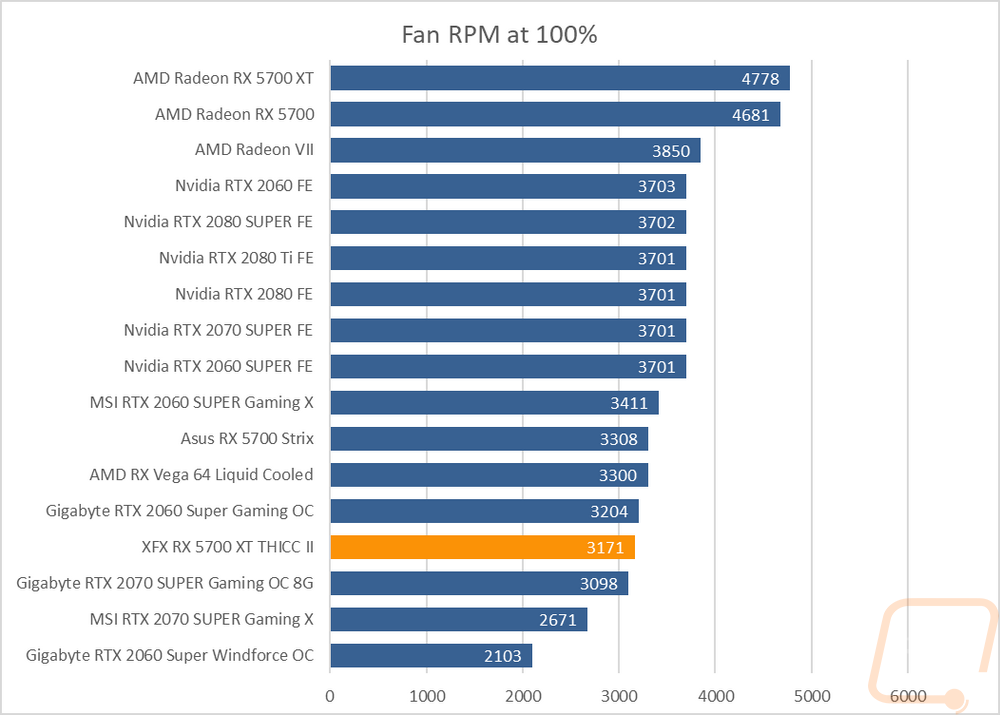 My last round of testing is the most important in my opinion. How did the XFX RX 5700 XT Thicc II Ultra do in thermal testing? For this I use AIDA64 unce again to put the card under load. I let it run for a half hour or longer depending on how long it takes for the temperatures to level out and be consistent. I then document what it is running at. I do this twice, once with the stock fan profile and then again (after a cooldown) with the fans at 100% fan speed. The idea is to see what the out of the box performance is then to see how much headroom the card has left. So the stock fan settings had the card running at 70 degrees Celsius. Not exactly my idea of great, you can see that most of Nvidia’s own Founders Edition cards were a touch less and all of the aftermarket cards are aiming for 65c or less. But still 18 degree’s less than the reference card which ran extremely hot. Then with the fan cranked up it ran at 56c. Again better than the reference card by 10 degrees this time. But as you can tell from the chart, this is still on the high side when compared with other cards. The 14 degrees does show a little room for better cooling, but we know from the noise testing (and from the original BIOS XFX sent the card with) that a more aggressive profile would end up cranking the noise levels up a lot. 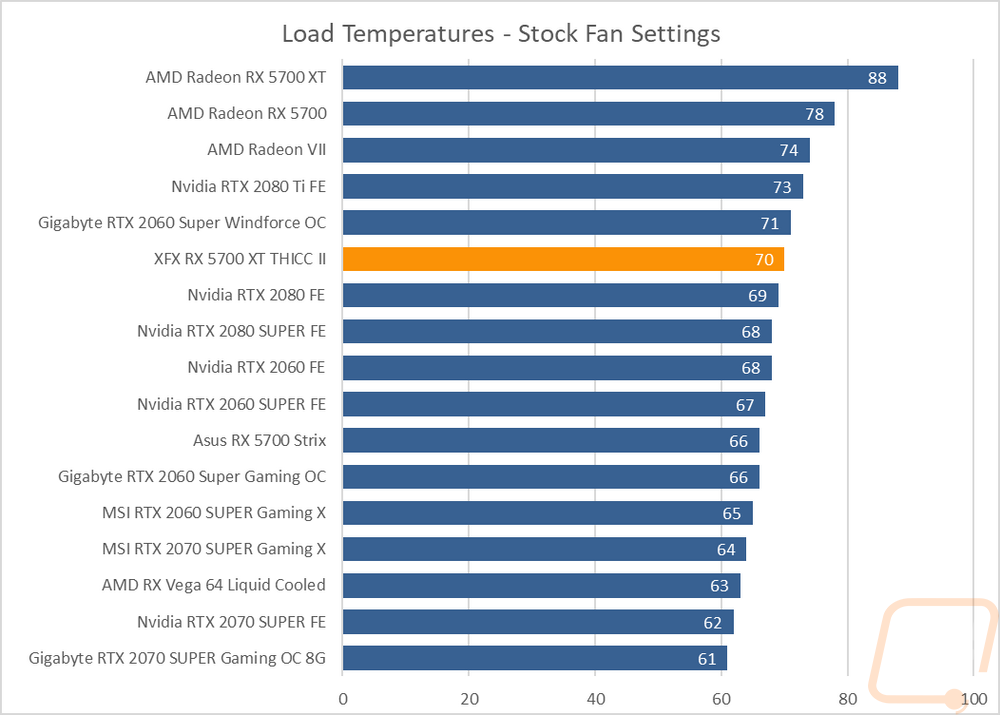 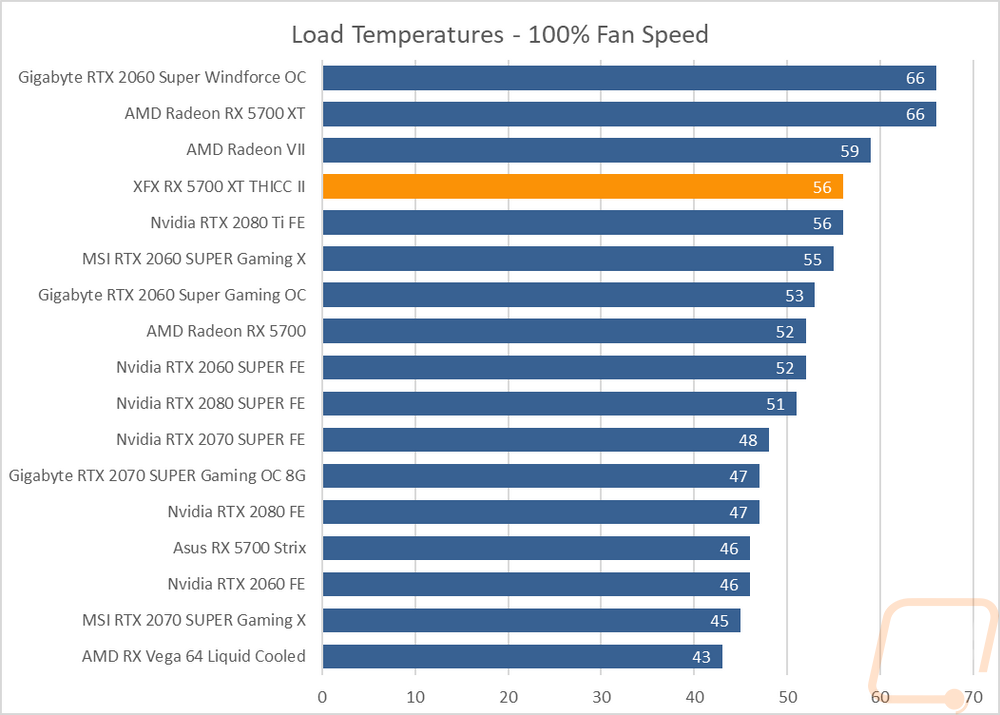 While doing the stock fan profile temperature testing I also pulled out the Flir to get a few images of the Thicc. I was just curious if there were any hot spots or if the large plastic shroud that has gaps between the heatsink and shroud would show pockets of cool or hot air. I can say that for sure you can see there is a warmer spot on the backplate near the bottom. More importantly, though you can also see how the plastic shroud kindof holds the heat back at the top where maximum airflow would be beneficial. Towards the front especially you can see the heat in the small gap and at the front where there isn’t anywhere to go. The heatsink design with that big gap between heatsinks in the middle shows in the fan side picture as well where you can see the PCB running extra hot in that area. 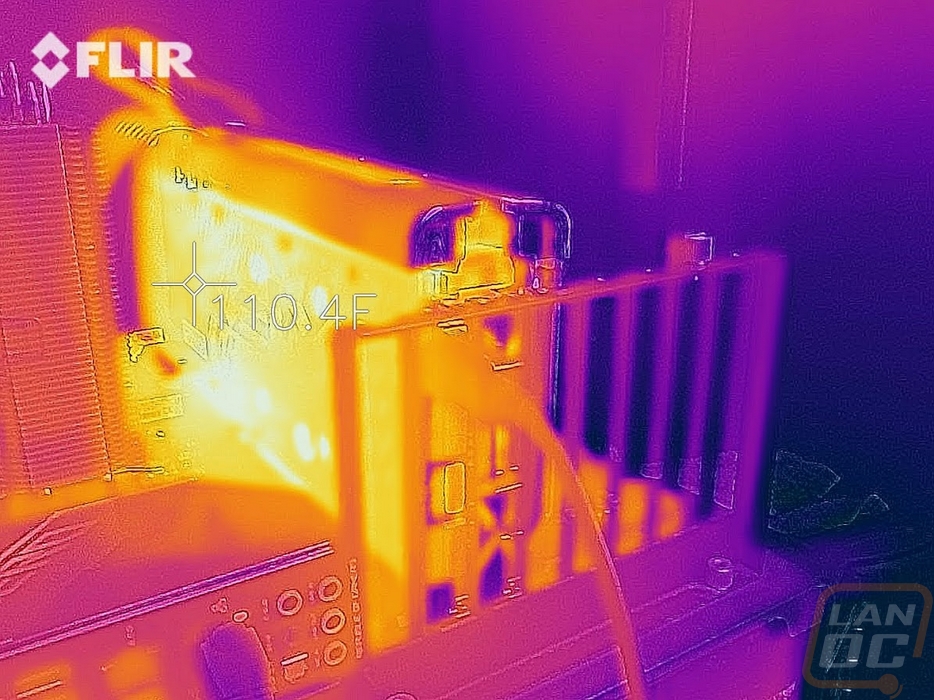 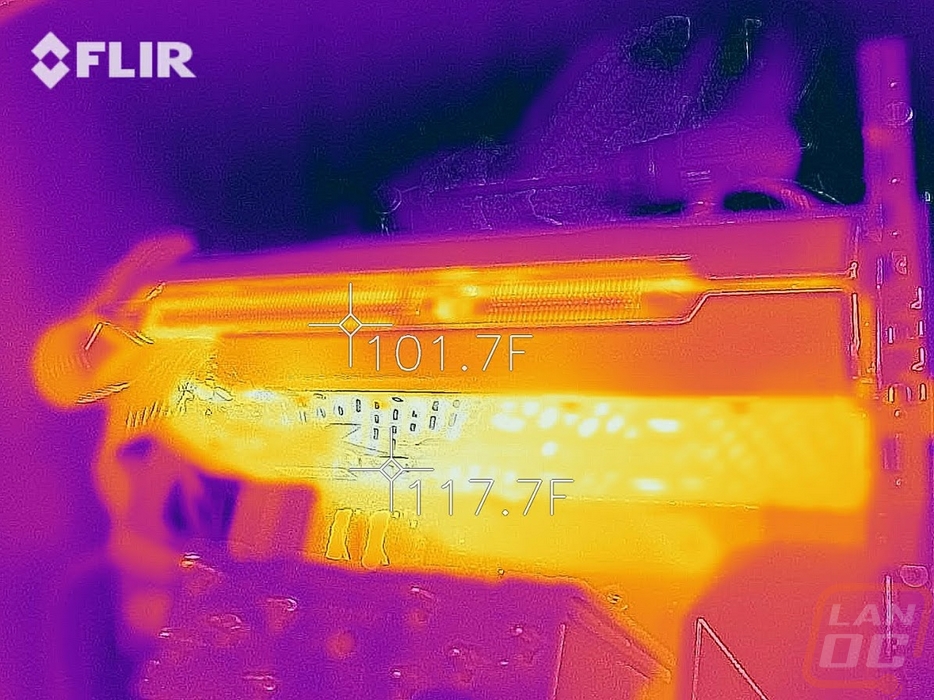 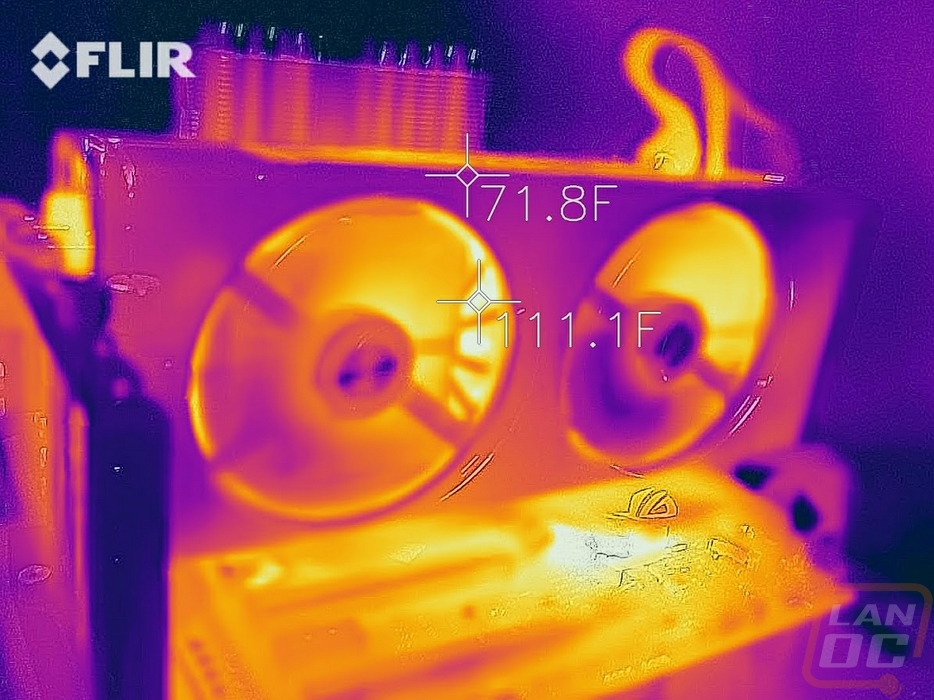 We have 1371 guests and no members online