XFX has gone through a few different styles over the years. You can go back to my early experiences with them through reviews right here on LanOC to get a look at most of the different styles.

One thing that is really clear is XFX loves to change up their look and I mean completely every single generation. Sometimes that is for the good and other times it isn’t. I personally love the original 7970 with its all-metal cooler and the 290. But I will say that the last generation of cards have been a little crazy to me with their fake carbon fiber look. Because of that I was really happy to hear that XFX was changing things up again and from the images leaked early on they were going back to something closer to the 290/390 time frame using the black look. Well they did it, they dropped the ugly carbon fiber look and I like the clean all-black look of the new cards. They have kept things simple with a plastic shroud with a textured black finish that wraps around the top and bottom of the card. There isn’t any fancy in your face RGB lighting and they use just a little fake chrome around the fans and at the ends. That is of course if you don’t include the big 50’s American car looking grill. You know what though, it is unique and not just the same thing done over and over again. Their cooler is a dual axial fan design and the fans look to match up with the R9 290. As for the size, well the name of the card is the Thicc II and all memes aside it does fit that description. This is a big card in every dimension which I’m not a big fan of. I would prefer it to stick closer to the PCI height and stock close to the overall fan size for length. In the end it is 293 x 130 x 55 mm which is 23mm longer, 20mm taller, and 15mm thicker than the reference RX 5700 XT. 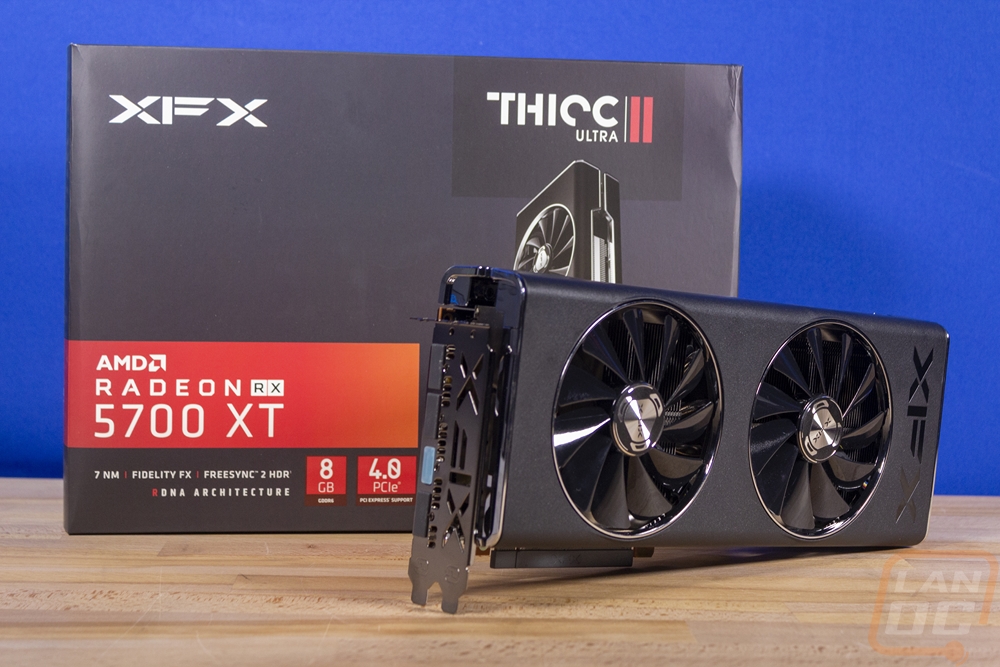 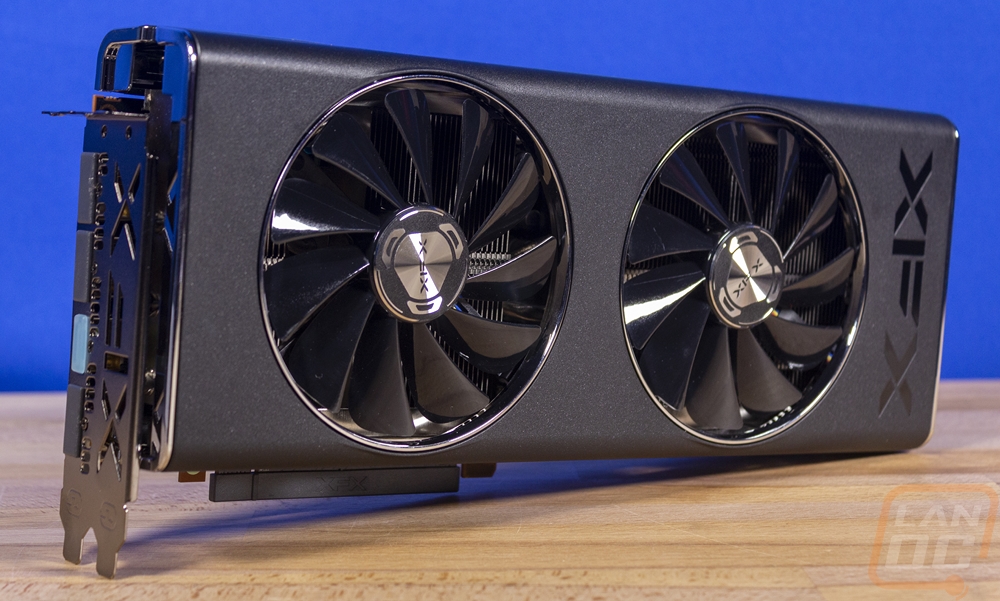 As I mentioned, I wouldn’t notice it normally but having just looked through past XFX cards, the dual fans on the Thicc look a lot like what was in their R9 290 only these have anew sticker in the middle with a unique shape and the new XFX logo. The fan shroud also has the new logo on the end just like that R9 290 as well only this time it isn’t backlit. Looking inside we can see that the heatsink has a vertical orientation which is normally preferred with an axial fan design, you don’t want to try to push air all the way the length of the card. 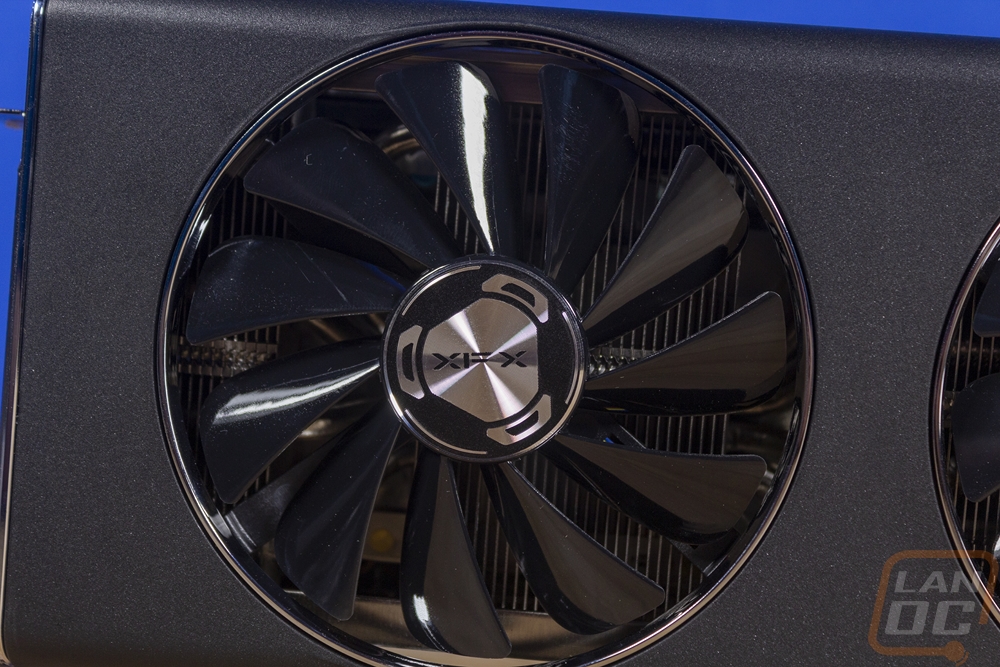 Around on the back, we can see the backplate. The big fan shroud is all plastic but the backplate is at least metal. It is spaced off the PCB though and Gamers Nexus has proven already that it could benefit from being up against the PCB with thermal pads to help be a functional part of the cooling, not just for looks like it is right now. I do like the slots cut in it though. While we are back here, seriously look at how big that fan shroud is, wrapping around the top makes it feel even bigger not to mention you can see that it is sticking out past the PCB as well.

The shroud is cut around the power connections at least. XFX stuck with the same 8+6 pin configuration that the stock card uses. They did flip them around and notch the PCB and backplate however to allow the heatsink to run closer without being in the way of the plug clips. Next to the power connections and almost hidden is a smaller hole. This gives access to a tiny switch on the PCB to flip between two BIOS. For overclocking dual BIOS are nice, but XFX is also using this to ship two different overclocks. One is a quiet mode with a lower power draw and the other is the big overclock for the Thicc II Ultra model that I am testing today which they expect boost clocks up to 1980MHz. 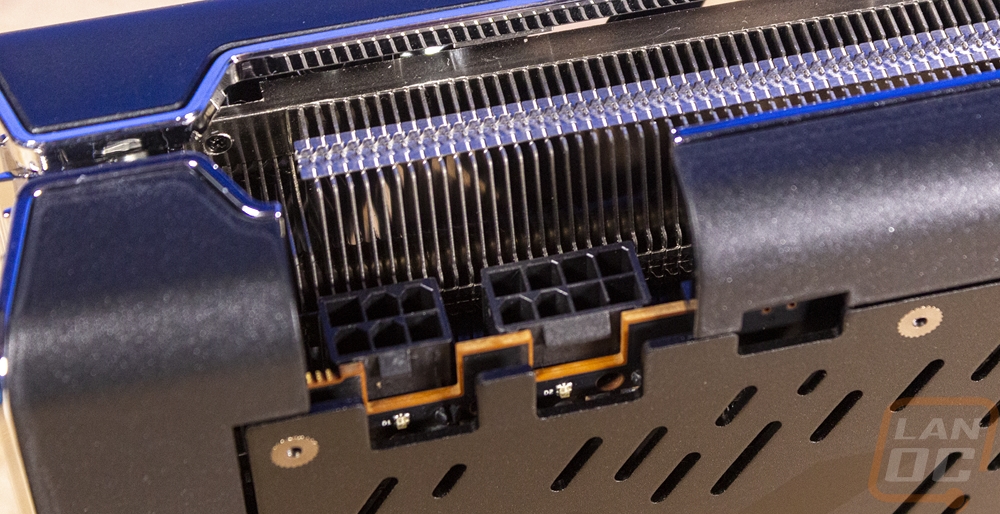 I’ve hidden it long enough, this is the chrome (plastic) grill on the end of the Thicc. Again it is unique and as a car guy I kind of like it. I don’t like the chromed plastic as much, however. Anyhow looking around the top and bottom edges of the card there are a few things that stand out. For starters inside you can see that the heatsink is split into three coolers with the largest being on the end running from just past the GPU to the chrome bumper. I don’t know why they would split up the heatsink that is over the GPU and the one at the end, however. All three are connected via heatpipes but I wish they tried to pack that additional cooling space in there, it is literally directly under the fan where the best cooling can be done. Hell the small heatsink on the end is completely hidden. The fan shroud design is weird in that there is an opening at the top and bottom, but it closes at the ends and especially for that smaller heatsink it basically traps it from airflow, that’s assuming it gets any from the fan, but it doesn’t look to be under that as well. Running axial fans with vertical fins on the heatsink, you do want them to try to not block airflow and it looks like XFX didn’t manage to do that. That grill at the end also shows us that the card size could have been a little smaller, I would prefer that grill be tight up against the heatsink, extending past the end of the PCB for open space isn’t efficient at all. But this is something XFX has been known to do the last few generations. 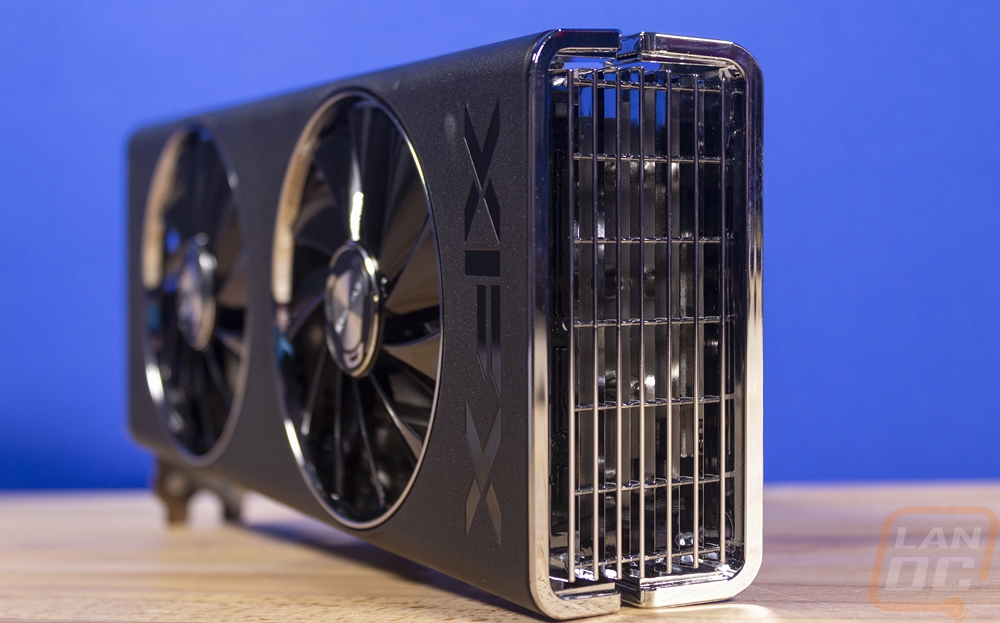 On the PCI bracket side, they did still put the XFX logo into the bracket. Given the cooler design there isn’t really going to be air flowing this direction but it is a nice touch. I would like to see the bracket be blacked out though to match the rest of the card and to match the rest of your case when installed. Especially with this being their most premium model. As for connections they ship the card with dust plugs for them all. You end up with three DisplayPort plugs and one HDMI slipped in which should cover what most people need.

Now there isn’t any lighting in the board on the top or front of the card for styling but I did notice that XFX has added status LEDs at the power connections that let you know if your cables are plugged in or not. I’m not 100% sure if I like the otherwise dark design without any lighting or not. I am happy though that they didn’t just shove backlit branding in my build like everyone else does. 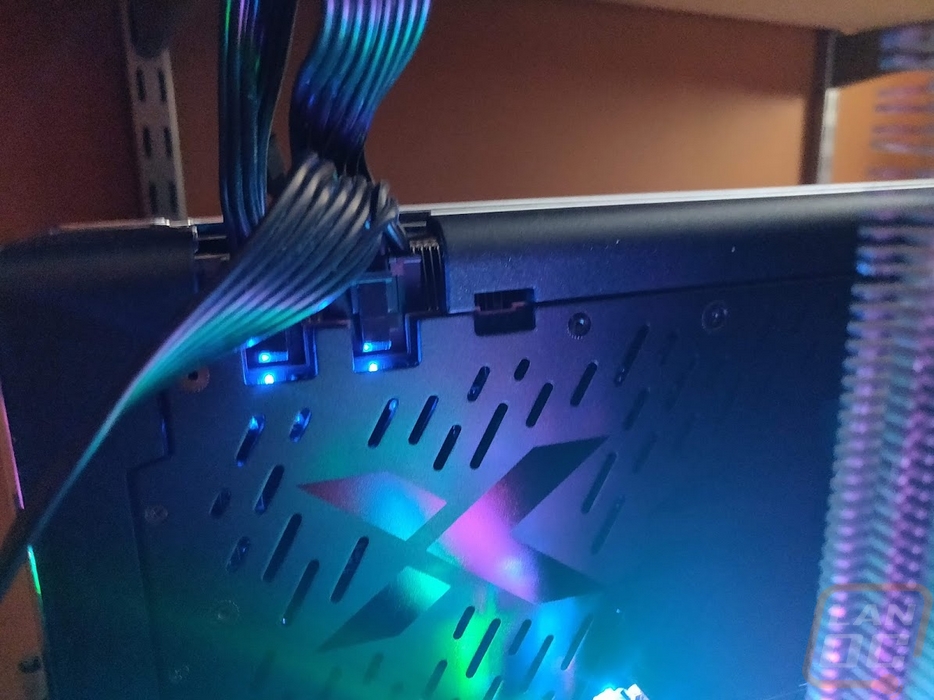 We have 1308 guests and no members online