Asus brought the currently Strix video card styling out for the 1000 series Nvidia cards and there hasn’t been much for changes from then until now so if the Asus RX 5700 Strix looks familiar it is because you have seen this design before multiple times. Now that doesn’t have to be a bad thing, this look is popular because it looks good. It has a grey and black theme that is color neutral, leaving the Asus Aura lighting that Strix is known to set the color theme. The fan shroud has an angular design that angles around each of the three fans. Its main styling points are the hockey stick shapes that are carved in above and below each fan, these are for the RGB lighting. Between each of the fans and at the ends of the shroud there is a black accent down the middle. Overall this is a large card coming in at 12 inches long, 5.1 inches tall, and 2.1 inches thick. That makes this a 2 and a half slot card and it is over an inch taller than the PCI standard which makes this a lot taller than the reference blower card. 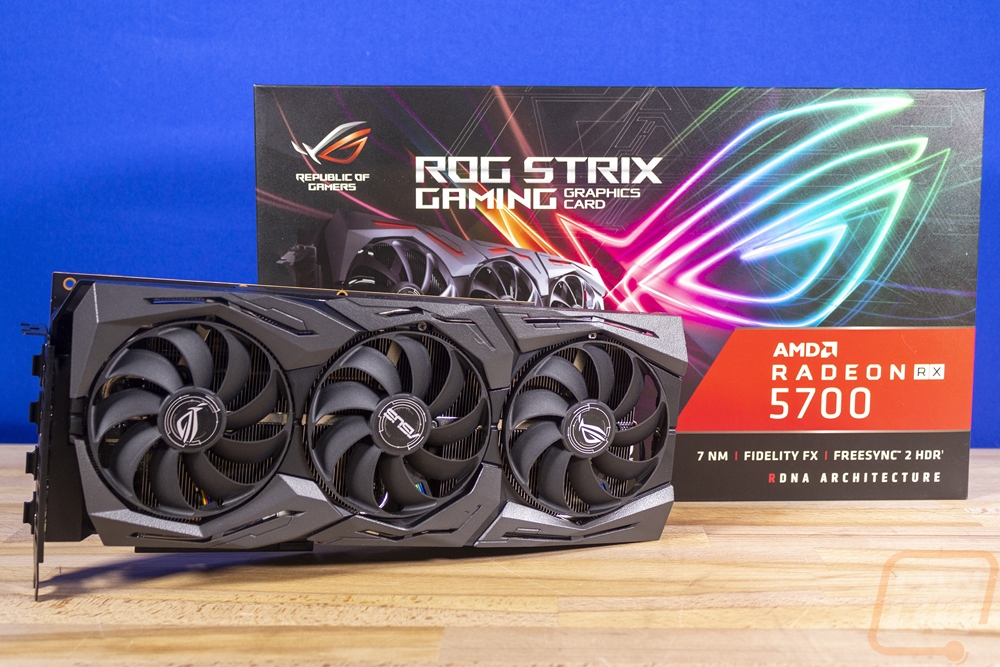 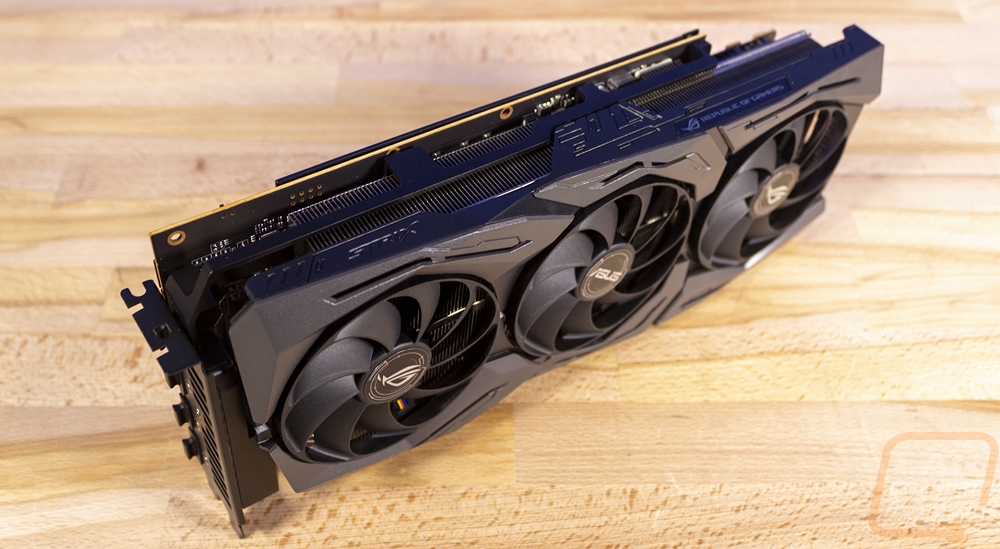 Now the three fans on the RX 5700 Strix have changed between now and the original 1080 Ti Strix launch. They now have an outer ring that gives the blades more strength. Each of the fans has a center badge, the two end fans have ROG logos and the center fan has the Asus logo. Looking through the fans you can get a better look at the Strix cooler design with vertical fin orientation which combined with the axial fan layout should push air up and down out of the card.

Looking around the edges you can see that Asus didn’t use an off the shelf heatsink, they custom made one for the AMD GPU. This includes the maxcontact heat spreader design and all of the heatpipes behind the heatspreader. You can see at the end of the card that they have five heatpipes pulling heat out to the end of the card. There are more running to the left side of the card as well to take advantage of all three fans. The top and bottom edges also show a secondary bracket that runs the length of the card for strength and giving something solid for the plastic fan shroud to mount too.

You can kind of see it in the look around the edges but Asus has a feature they have been including in a lot of their cards for a few generations now and I don’t think it gets enough attention. At the end of the RX 5700 Strix, they have three connections tucked away where you can barely see them but you have access to them. You get two four-pin PWM fan headers and one four-pin RGB header. Now why would a video card have these? You might think its just unused connections for other cooler designs, but it isn’t. The idea here is you can hook up two case fans that are responsible for the air blown at the video card and this will control their fan speeds based on the video cards' needs, not the CPU temps which drive fan speeds normally when hooked up to your motherboard. It’s a great idea and a lot more efficient as well. Then the RGB header is just a chance to offer an RGB header. This is especially nice if you don’t have an RGB header on your motherboard or if you used it and need more. The downside, of course, is all of these cables have to run from the end of your card, so keeping it clean looking might be hard, but I really like them.

Looking up along the top edge of the RX 5700 Strix it does have a few things going on. You have the power connections down near the end. They went with an 8-pin paired up with a 6-pin. They are flipped around to help keep the heatsink tight against the connections. They are also set down lower into the PCB which allows the height of the card to basically use the space already used by the power plugs. If you look close you will also see LEDs on the PCB by each plug. These are two different colors, lighting up to warn you if you don’t have the plug plugged in all the way of letting you know you are good to go. Down on the other end of the card, still on the top edge the RX 5700 Strix does have a BIOS switch to flip between its dual BIOS. This is a nice overclocking feature, you can overclock with a BIOS and flip back to a safe BIOS as well. Next to that, the button with the big white ON and OFF is a quick way to turn the cards lighting on and off without software. I like the card's lighting, but if you want no RGB lighting this is nice to have.

For the backplate, Asus uses a thicker aluminum than most cards (with the exception of Nvidia’s Founders Edition cards) with an anodized black and brushed finish. I’m not a huge fan of the lines added to the backplate, but they do match the cuts and lines on the fan shroud. They have the Asus Strix branding right at the edge and then over on the left, there is a large ROG logo. This logo is backlit with their Aura lighting. Now I’m always really down on backlit branding on cards, especially on the top edge but I’ve always liked this feature. It highlights the backplate a little and is something not everyone else is going. Beyond that the backplate does have a few holes cut in it for access to the screws that hold the heatsink to the card and around a few board components, but it goes edge to edge otherwise protecting all of the PCB. 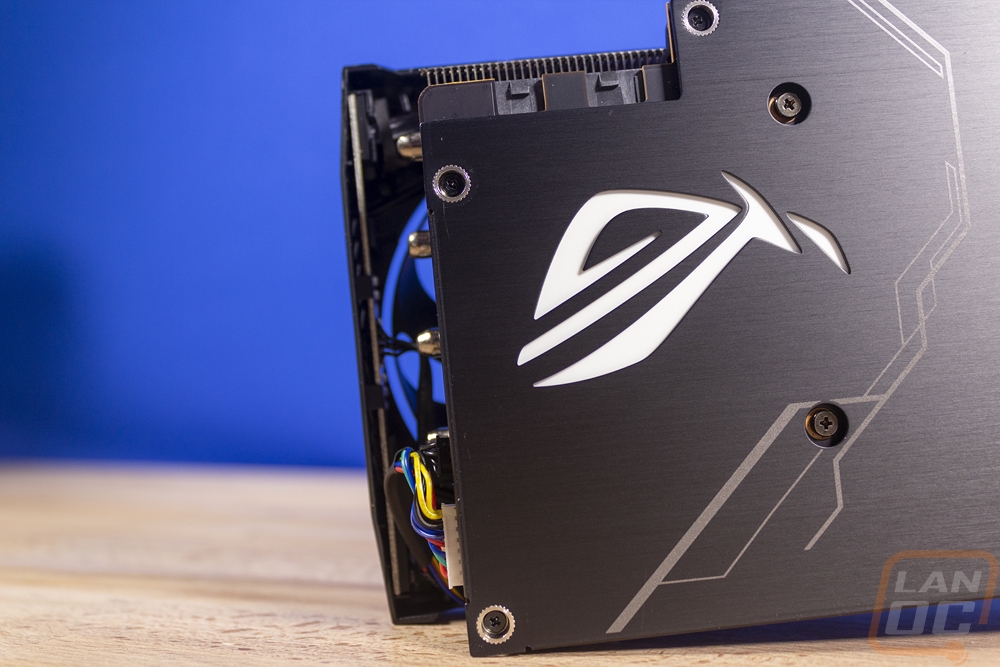 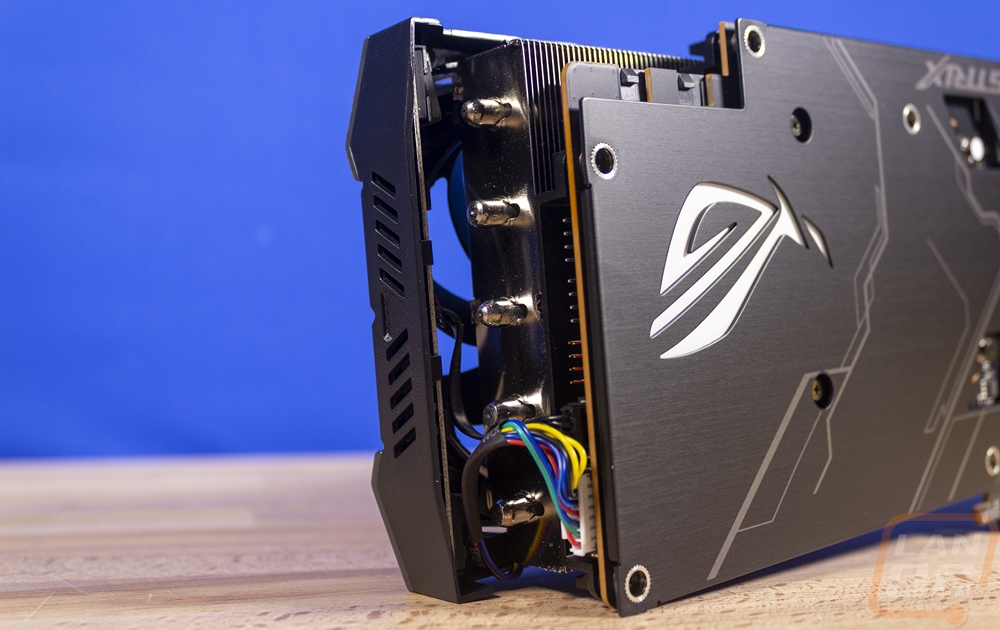 I absolutely love the blacked-out PCI bracket on the RX 5700 Strix and I really wish most cards would do the same. Even with the axial fans, the bracket does have ventilation holes and they are wide and should offer good airflow. Below that there are four connections. The RX 5700 Strix gets the now standard layout. You get three DisplayPort connections with one HDMI slipped in on the second from the right.

I mentioned all of the lighting areas, but it is a lot easier to see them lit up all at once. The Strix styling hasn’t changed at all for a while now, but I do still love how they use lighting as an accent on the fan shroud with two dashes above and below each of the three fans. I could go without the backlit ROG logo up on the top edge of the card, I’m tired of my PC looking like a billboard for companies. But overall I will take the logo as long as it comes with lighting like this, a lot of cards just have the backlit logo and that is it. On the other end of the spectrum, there are other cards that are almost all RGB and that is too much as well. The ROG logo In the backplate itself looks good as well, but again I would prefer lit up accents on the backplate over logos. All of the lighting runs through Asus’s Aura software and can be synced together with Asus motherboards, your case lighting, and a lot of the RGB memory modules as well.

Asus started this a long time ago and it is starting to get traction with some other companies. Under both of the power connections, you get status LEDs. They will light up red when you don’t have the power hooked up and white when powered up to let you know you are good to go!

We have 792 guests and one member online