When I finished testing both of the reference AMD RX 5700 series cards I was extremely impressed with their performance for their pricing but I ended my review recommending people wait for aftermarket cards. This is because the coolers on both cards were clearly outmatched for the GPUs. They were extremely loud and ran hot, very hot. Both could be fixed with aftermarket cooler designs. I have been slowly getting my aftermarket reviews out partially from the timing of cards shipping and with my already planned vacation. But drivers played an even bigger role. This is AMD's new RDNA architecture and it takes some time to work things out. Frankly I have fought with inconsistent results, issues which have had me reinstalling drivers over and over, and similar issues with our new X570 test platform as well. Things are starting to smooth out, though some of the issues I complained about even at the original launch like problems with fans not slowing down after manually setting them, sometimes requiring restarts. But I’ve got testing done on a whole stack of RX 5700 and RX 5700 XT based cards so you can hopefully expect to see more reviews soon.

The first though is the Asus RX 5700 Strix and I haven’t had too many Asus cards come through lately so I was excited to see what they were doing with AMD's new cards. The Strix design is almost completely unchanged as far as aesthetics go and while I still think this is a great looking card I have to point out that it's starting to feel a little stale. Most people aren’t going to want to upgrade to a new card and have it look the same as their old one, even if the look mostly works. I hate bringing it up though because where can Asus go from here, this design looks great, is color neutral, and is one of the only good uses of RGB lighting in my opinion. They use RGB accents on the front of the card, not just a backlit logo like a lot of the cards are doing. I'm not a huge fan of their backlit logo up on the top edge, I’m tired of my PC being a billboard for brands. The ROG logo on the backplate would be better if it was accents like on the shroud, but I can’t complain too much because I love that they carry the styling and lighting on to the back of the card. Speaking of, the Strix gets you a backplate where the reference RX 5700’s have none at all and let's not forget it’s heavy-duty and good looking backplate! Asus is also slipping in additional RGB headers and fan headers that control your case fans depending on your GPU temperatures, not just your CPU while the GPU bakes.

Performance is interesting. This is an overclocked card but I didn’t see much of a gap between this and the reference card with in game testing or really any of the testing. I do expect to see performance improve as drivers are worked on but even with performance just matching the reference card still gets you a big jump over the regular RTX 2060 and performance up with the RTX 2060 SUPER from time to time. Asus really made the RX 5700 Strix stand out in my other testing though. The reference RX 5700 was horrible for thermals and noise testing and the big three fan Strix cooler fixes that. I’ve never seen such a drastic change in fact. It goes from being one of the hottest and loudest cards I’ve ever tested to being the quietest or close to it and thermals are amazing with a full 20 degrees left in the cooler if you turn the fans up over the stock profile.

Now a good or a bad card still depends a lot on pricing. For the RX 5700 Strix, it is listed at $399 and you can find it both on Newegg and Amazon at the time of this review. AMD, like Nvidia has been ramping up the bundles with their cards and this card is no different. Currently you get your choice of Borderlands 3 or Ghost Recon Breakpoint for games which are impressive and then on top of that they include a 3-month pass for Xbox Game Pass which gets you access to 100 different games including Gears 5. Other AMD cards will get you those same bundles and Nvidia has a Modern Warfare bundle that is comparable as well. So let's just focus on pricing. For Nvidia competition most of the RTX 2060s are in the $350 range and the RTX 2060 SUPER runs from $400 to $470. The RX 5700 on the other hand, well the reference card launched at $349 and right now you can get them for $330. So the RX 5700 Strix is expensive for an RX 5700, so much so that it has priced itself right up into the range of the RTX 2060 SUPER which is a faster card. There are a few aftermarket RX 5700’s including the Dual model from Asus that are in the $370 range which I think better fits where this card should be. That is below the 2060 SUPER and $50 more than the noisy reference cooler. So I think the Strix is going to have a little bit of a rough time until pricing is adjusted. It also puts this card right in with the reference cooler RX 5700 XT’s which are again much faster. So overall this is an amazing card that right now is waiting on having a price that helps pull it out from in the middle of the next tier up. 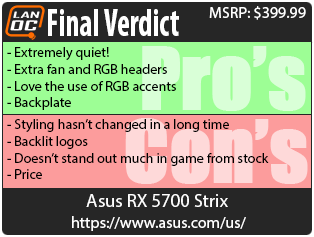 You might call him obsessed or just a hardcore geek. Wes's obsession with gaming hardware and gadgets isn't anything new, he could be found taking things apart even as a child. When not poking around in PC's he can be found playing League of Legends, Awesomenauts, or Civilization 5 or watching a wide variety of TV shows and Movies. A car guy at heart, the same things that draw him into tweaking cars apply when building good looking fast computers. If you are interested in writing for Wes here at LanOC you can reach out to him directly using our contact form.
Discuss this article
Log in to comment
Posts in discussion: Asus RX 5700 Strix

We have 1633 guests and one member online