My last round of testing is focused on a few things that are important, but don’t really affect actual in game performance. But these are also the biggest areas that aftermarket cards can set themselves apart from other cards with the same GPU. I’m especially interested in seeing how the Gigabyte RTX 2060 Gaming OC Pro 6G compares to the MSI RTX 2060 Gaming Z 6G that I also recently reviewed.

My first tests were focused on power usage. I ran one test using 3DMark Fire Strike’s combined benchmark that loads the CPU and GPU similar to normal in game performance. I then used our Kill-A-Watt to track the highest wattage pulled from the test bench. The Gaming OC Pro peeked at 396 watts, this was higher than the 389 of the Gaming Z and even up above the RTX 2070 Founders Edition. My second test was using AIDA64 to load just the video card, here the wattage was much lower at 259 watts. This matched the RTX 2060 Founders Edition and was above the Gaming Z’s surprisingly low result. 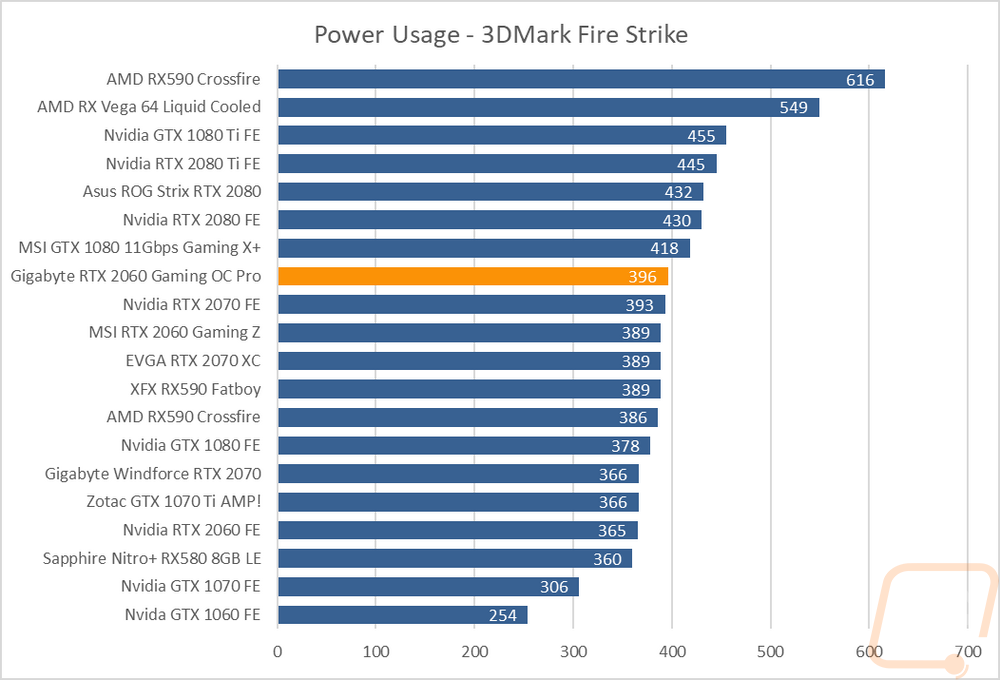 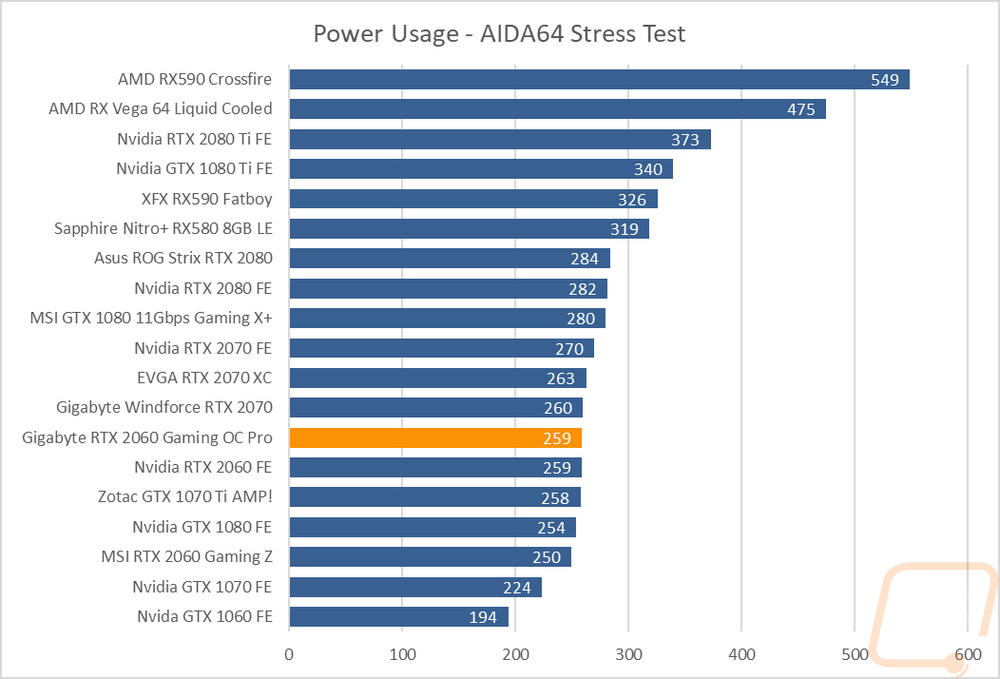 Next, I wanted to check out noise performance, especially with the Gaming OC Pro having three fans. Gigabyte has the three fans running at a few hundred RPM less than the Gaming Z in addition to the unique Windforce layout that has the middle fan spinning the other way to optimize airflow and keep the turbulence between the fans down. This translated to a lower decibel level, even with the fans turns all the way up to 100% and at 50% this was the quietest fan tested. 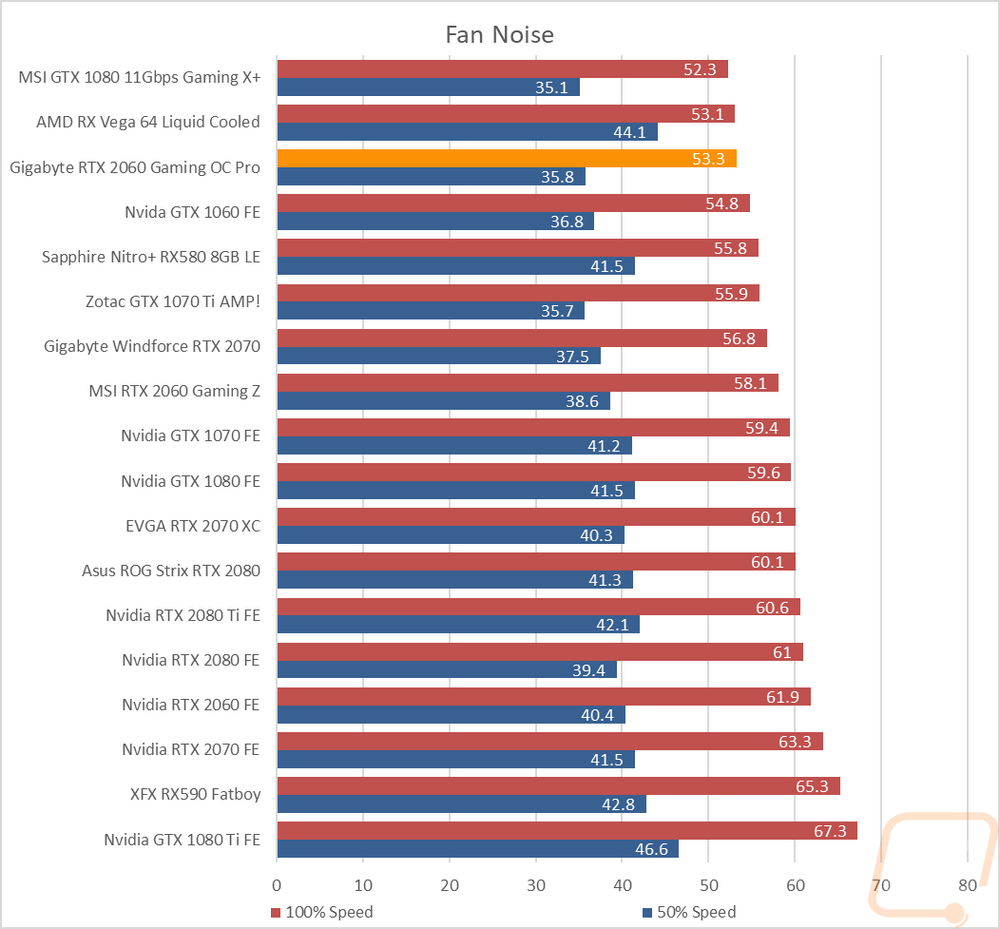 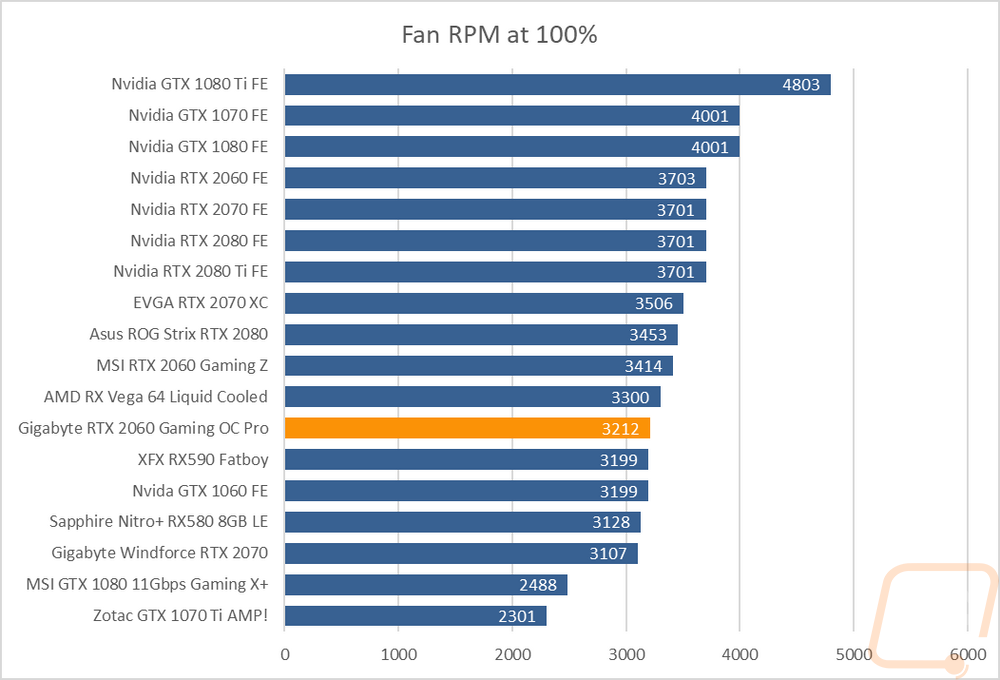 My last tests were then focused on cooling performance. For reference, the 2060 Founders Edition does have the two axial fans but is a traditional size so no extra large fans, the Gaming Z has two huge fans and is extra tall because of it, then the Gaming OC Pro that I am testing today is normal height but is longer to fit the three fans. I tested twice, once with the stock fan profile and then again with the fans turned up to 100%. Both tests used AIDA64 to load up the card. With the stock fan profile, the Gigabyte card came in at 59 degrees Celsius which was tied with the Gaming Z. This is much better than the 65 degrees of the Founders Edition. Cranking the fans up I was surprised to see that the Gaming OC Pro once again matched the Gaming Z at 42 degrees which tops our current charts. This is a huge jump from the stock fan profile as well, showing just how much cooling performance is left as well. 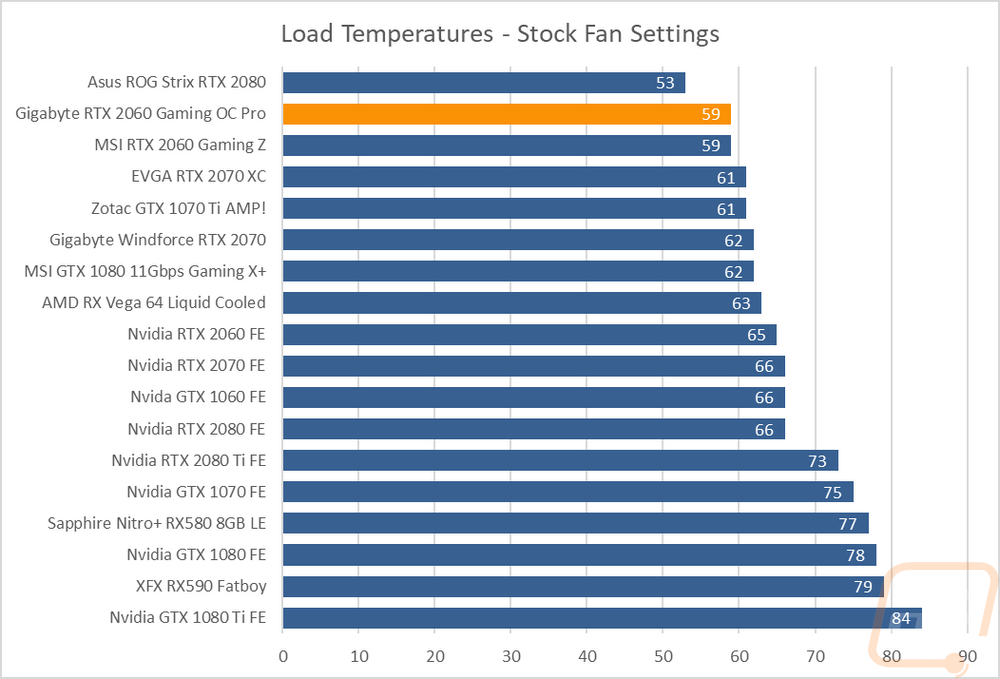 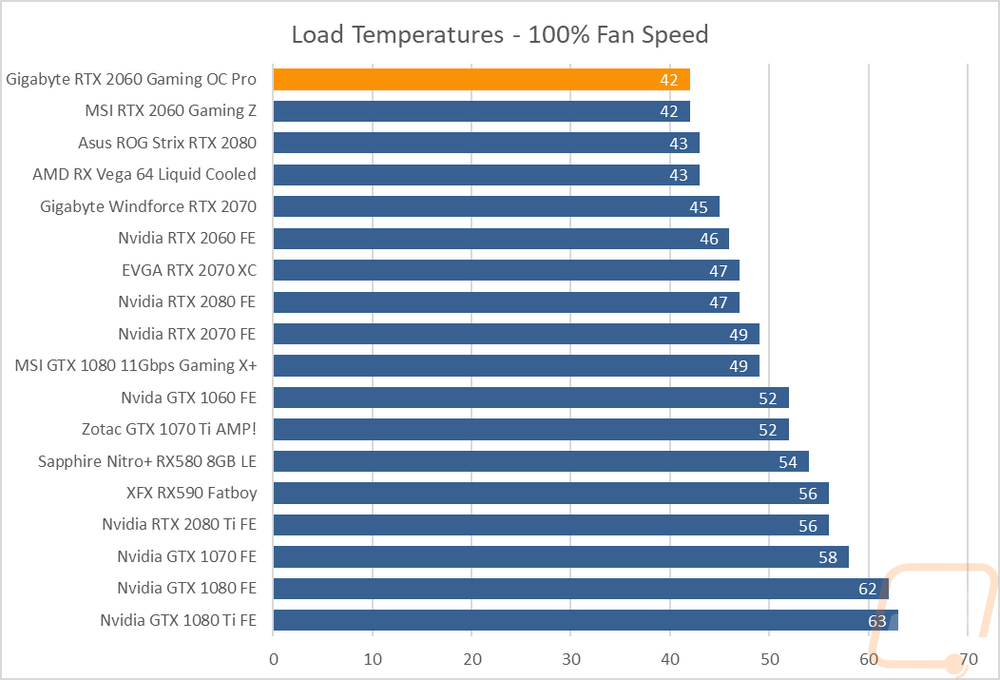 While doing the stock fan profile tests I also took a few thermal images to get a look at how the card is handling the heat generation of the RTX 2060. I expected to see heat blowing out the top and bottom of the card where the shroud is shorter and I did. Looking at the fans directly you can see the heatsink under them, but I was surprised that even the hot spots were only showing 97.7F, the triple fan design does a good job of spreading the air flow around. The backplate only had one warmer area which looks to be behind the VRM. Overall, the great cooling performance we saw in the cooling testing showed here as well. 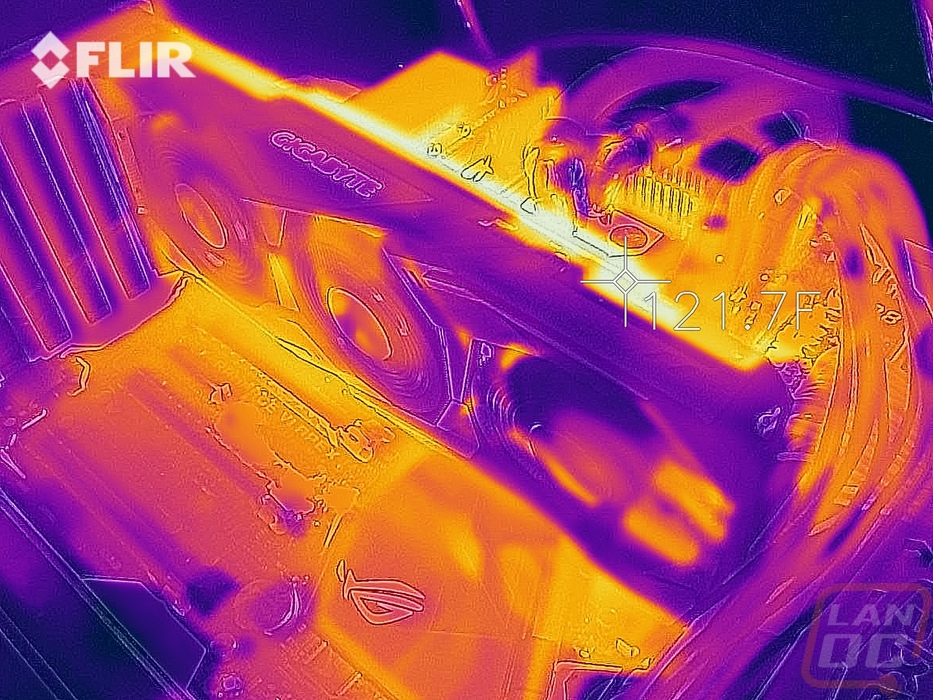 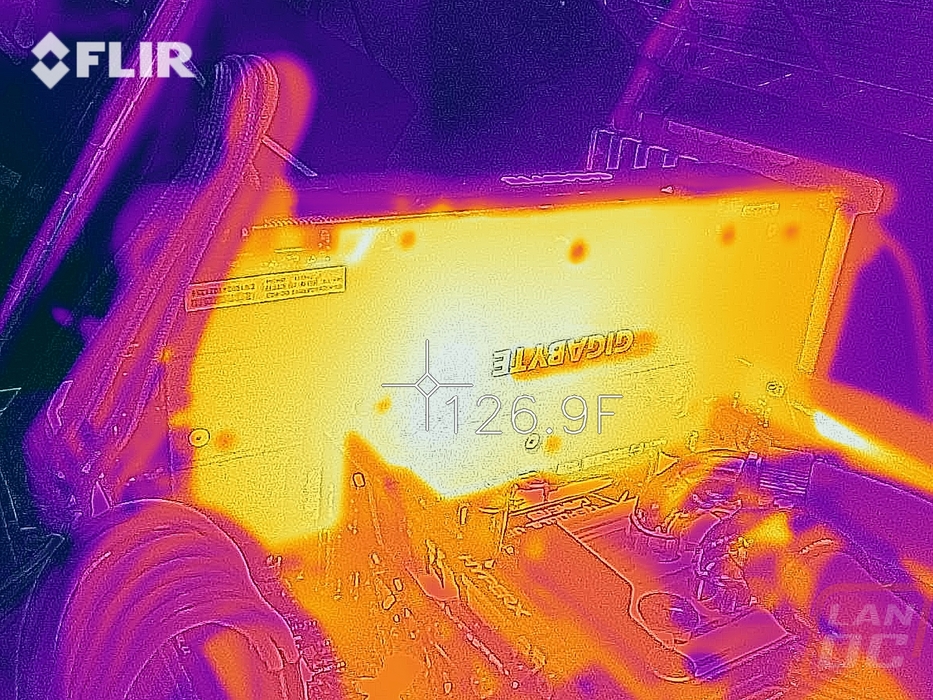 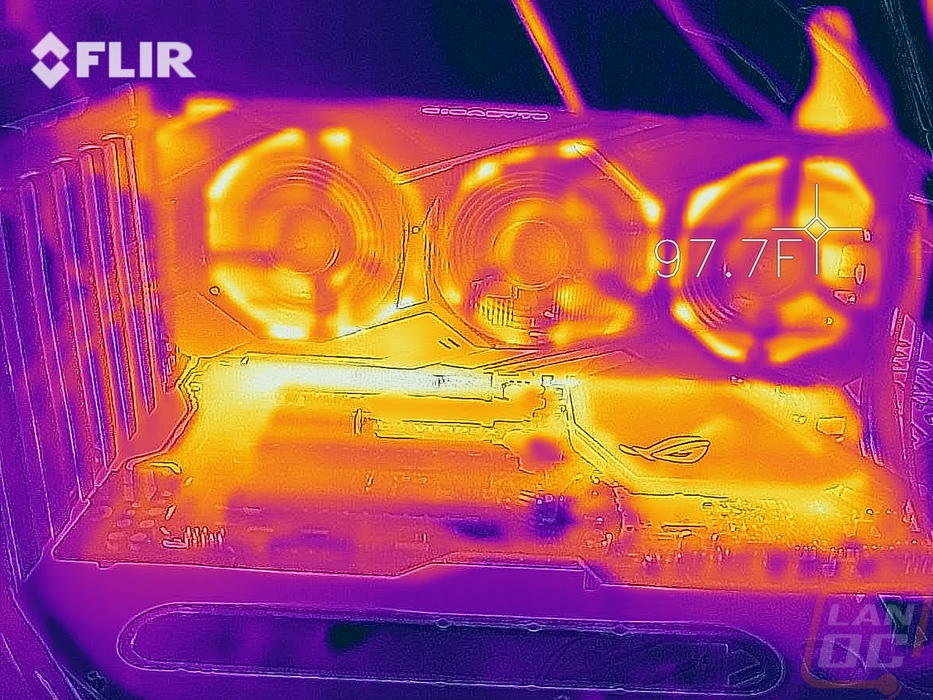 We have 1241 guests and one member online