I’ve been impressed with the performance of all of the RT 2060’s that have come into the office, but It was interesting to have both the MSI RTX 2060 Gaming Z and the Gigabyte RTX 2060 Gaming OC Pro end up with the exact same overclock, especially when considering how big of a bump they were over the Founders Edition. With them having the same clock speeds it was interesting to see that the Gaming OC Pro edged the Gaming Z out in most of the benchmarks if only by a small amount. When compared to the Founders Edition the extra overclock was enough to push the Gaming OC Pro up past the GTX 1070 Ti in a lot of the DX11 games and up over the GTX 1080 in a lot of the DX12 games. This isn’t even also considering the tensor and RTX cores that you get as well. In the end, you get a great card for anyone running 1080p or even at 1440p as long as you don’t mind playing with the settings in a few games to keep the frames nice and smooth at 60+.

Where the Gigabyte RTX 2060 Gaming OC Pro really stands out to me though is this is more of an old school design compared to the Gaming Z. The triple fan design ends up making the card longer and that might be an issue for some. But they keep the height nice and low, just like the Founders Edition which is going to help in some cases. Especially when compared to the Gaming Z which was tall and then also had the power connection all the way at the top. Gigabytes design is also a little tamer when it comes to lighting, they only have the logo on the top edge lit up. They didn’t go crazy with lighting all over the card like a lot of today's cards do. The styling is calmer as well with the mostly all blacked out look with just a touch of dark grey. The cooling performance ended up being amazing as well. But it was the noise performance that stood out the most. Even with the fans at 100% fan speed, this was one of the quietest cards tested and combined with the cooling performance this card should never need to have the fans spinning that fast.

There were a few downsides. I mentioned the card length before, I still consider the height issue the Gaming Z had to be much worse. But you do want to make sure this card will fit in your case if you are running a smaller case at all. I also think the decision to not include DVI like the Founders Edition does was a bad one, the RTX 2060 is at a price point that I think some people will still be running older monitors and may need it. I also wasn’t a big fan of the logo being lit up on the top of the card. This isn’t Gigabyte specifically, almost every card does this. I build my computer for me, I don’t really like every component having the company logo glowing like time square. That’s not to say that I didn’t like the lighting, I just would prefer it light up the RTX 2060 model name or a few nice accents.

Overall Gigabyte has a great card here and at $389.99 it is competitive for what you are getting if not a value overall. You get a nice overclock over the Founders Edition card which sells for $350 and both cooling and noise performance were top notch and over that same Founders Edition. The Gaming OC Pro is very similar to the Gaming Z in performance and even cooling, but I think the noise performance helps edge this card over the MSI unless of course, you prefer the styling of that card better. Another big bonus is right now you can get Battlefield V or Anthem free with the purchase and both of those are big name games. They also give you a chance to play with both DLSS and Ray Tracing on your new card that supports it as well. 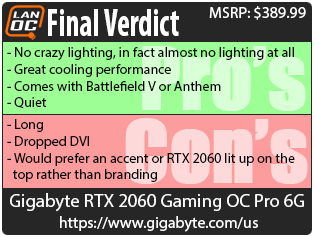 You might call him obsessed or just a hardcore geek. Wes's obsession with gaming hardware and gadgets isn't anything new, he could be found taking things apart even as a child. When not poking around in PC's he can be found playing League of Legends, Awesomenauts, or Civilization 5 or watching a wide variety of TV shows and Movies. A car guy at heart, the same things that draw him into tweaking cars apply when building good looking fast computers. If you are interested in writing for Wes here at LanOC you can reach out to him directly using our contact form.
Discuss this article
Log in to comment
Posts in discussion: Gigabyte RTX 2060 Gaming OC Pro 6G