By now I imagine most people have seen at least one Gigabyte Windforce card, Gigabytes styling hasn’t changed too much with their designs for a while now. They are one of the main companies who love going with this three fan design. I used to not be a huge fan of the triple fan designs because all of the cards end up being really long and that is the case again here with the Gaming OC Pro being longer than both the Founders Edition and MSI Gaming Z that we have taken a look at. But the design has grown on me a lot, mostly because everyone except Nvidia has moved to going with the larges fans they can get for dual fan designs and with that making the cards extremely tall where Gigabyte’s design here is right there at the top of the PCI bracket all the way across the card. The fan shroud while mostly sticking with Gigabytes normal styling does add a few silver accents and also doesn’t have any crazy in your face lighting, this goes with the “Pro” designation. 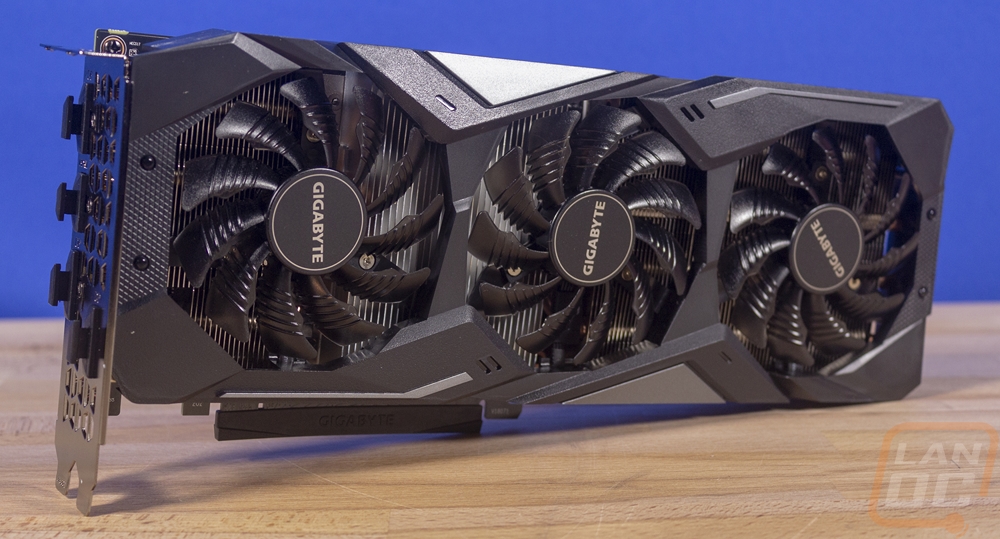 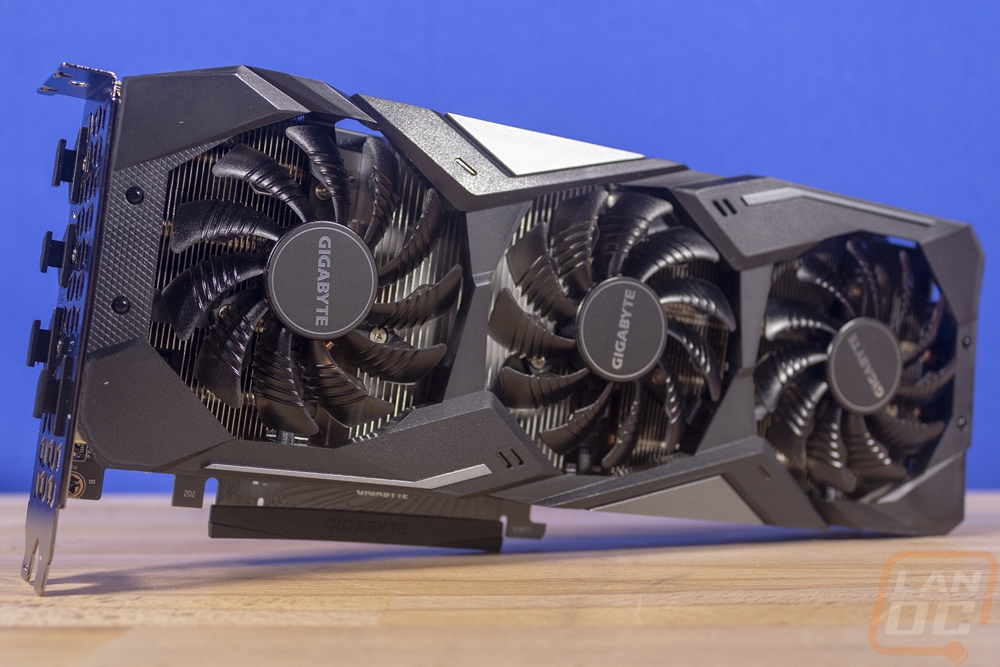 So one of the big features of the Windforce design are two different fan designs. The left and right fans both have the same counter-clockwise orientation spin that you can also see with the curve of the fan blades. Then in the center that fan turns the traditional clockwise direction. The idea here is that the areas between the fans that normally have a lot of turbulence are pushing the air the same direction. You can confirm this by looking between each of the fans and seeing how on the left both blades point up and between the middle and right they both point down. This lets Gigabyte run the fans closer together and fit the third fan. It also should translate to less noise as well.

Looking around the top, end, and bottom of the card you can see that the fan shroud doesn’t go all the way to the PCB. There is a gap because this is where the airflow goes. The Axial style fans blow down into the heatsink and then the air runs into the OCB and has to go up or down to get out. The Gigabyte logo area on the top of the card does cut down into that airflow area a little, but overall there looks to be good airflow. This also gives up a peek in at the heatsink design as well which does stay close to the board and like the Founders Edition seems to share the same design with some of their RTX 2070 cards, you can tell because of the empty notch around the power connection both in the heatsink and the PCB where a second connection could be fit.

The back of the card does come with a backplate. Gigabyte went with a cheaper thin sheet metal backplate when compared to the MSI and especially to the Founders Edition which has a very thick backplate and shroud. The thin design does save weight while still protecting from any immediate damage from drops. It also looks a lot better than a bare PCB and with this being the most visible part of a card when installed in most cases that can be important. The Gigabyte branding here is flipped around so it can be read when installed. The end of the fan shroud does extend a little past the PCB to cover up the oddly long heatpipe tips sticking out of the end of the heatsink. 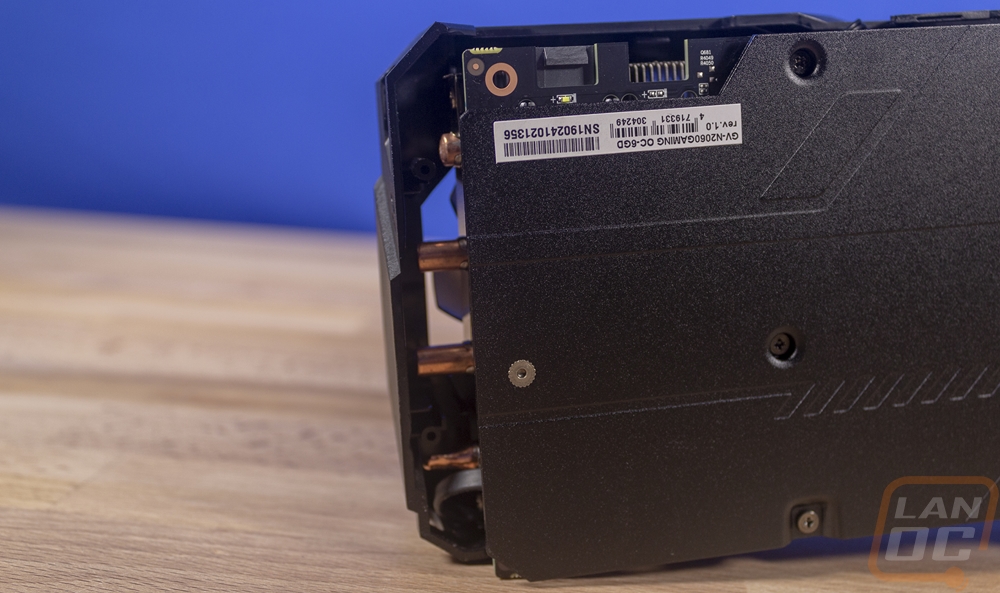 Up on the top edge of the card, we have the power connection that I already mentioned a little about. This view gives a better look at the notched PCB for both the current connection and a second unused spot as well as the heatsink also leaving room for that second connection as well. They run the power plug flipped around like this to save as much room for the heatsink and to allow more room to get your finger in to unlock that clip when needed.

Also up on the top edge and part of the grey accents on the otherwise black card is a Gigabyte logo. This logo is backlit with RGB LEDs and they run all in one color, not individually. There isn’t any other lighting on the card which a lot of people will like. I’m still not a huge fan of bright backlit advertisements on my hardware, I would still prefer this be RTX 2060 rather than the Gigabyte branding personally. But I do like that it is RGB where the Founders Edition isn’t and it isn’t too in your face like some other designs. 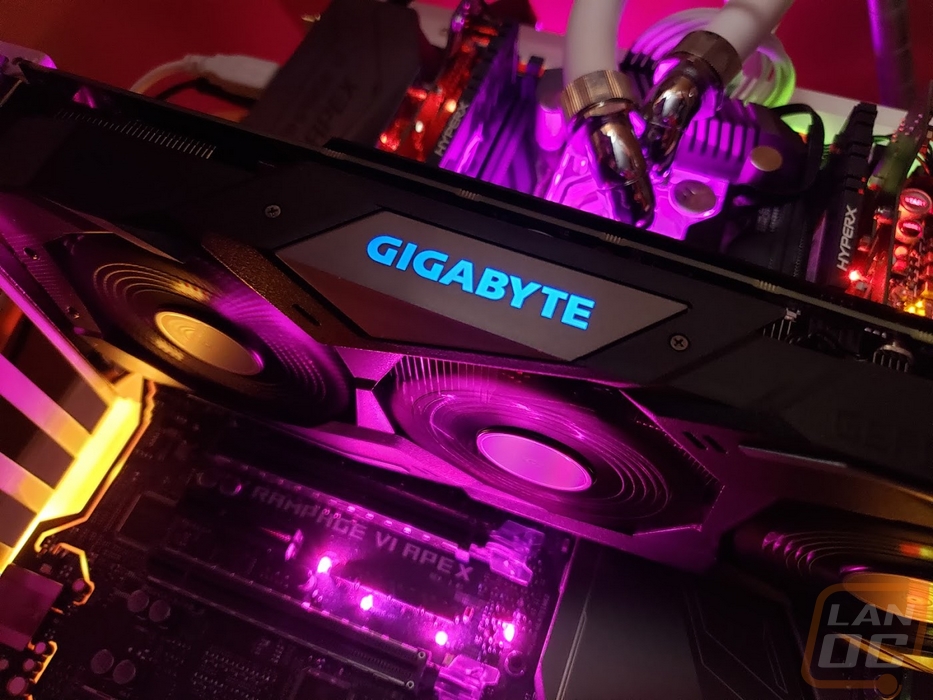 The PCI bracket has a lot of ventilation cut into it even though the cooling design won’t be pushing a lot of airflow that direction. But as far as connection options Gigabyte went with the same configuration as MSI did with the Gaming Z. You get three DisplayPort connections and one HDMI. In a higher end model, I would love this configuration but I am disappointed at dropping the DVI connection that the Founders Edition has, I think at this part of the market there will still be some who need it.