I think the last PowerColor card to come into the LanOC office was all the way back with the R9 390 and to say that things have changed a lot in that time is an understatement. The last few PowerColor cards I had come in did start to move to the black and red theme that you still see today with the Red Dragon cards but I will say that the RX 5500 XT Red Dragon looks a lot cleaner than I would have expected given the model name. I’m used to the Red Dragon models being big, flashy, and the quintessential gaming card with black and red themes. With this generation including the RX 5700 and now the RX 5500 XT, they have gone with a much more clean look and I love it. It reminds me a little of what XFX has been doing because of the chrome accents around both of the fans, but the squared-off black shroud is more my style overall than some of the crazy looking cards and hey look finally cards without that random “angular” look all over the shroud. 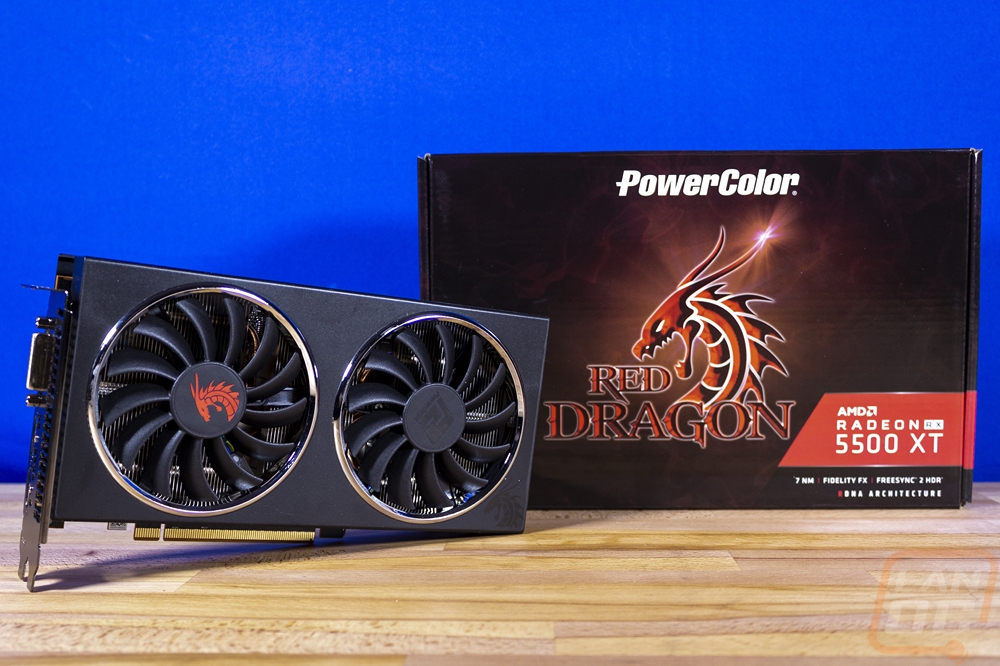 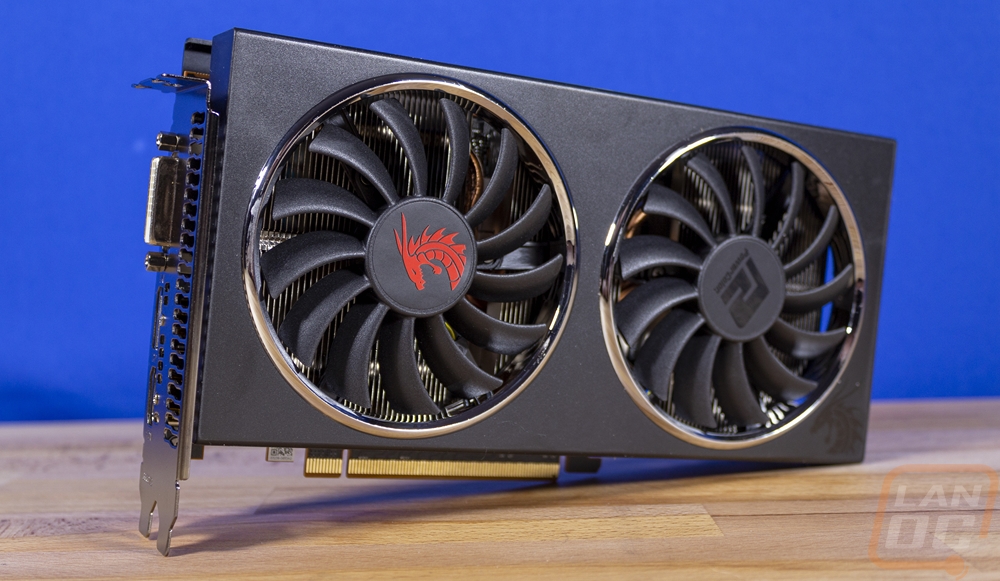 A look at the fan side gives us some more information as well. The card is taller than a standard PCIe card with it sticking out over the top of the PCI bracket. This allowed them to run two large fans. They are axial fans that blow down through a vertically orientated sheet metal heatsink with heatpipes running from the center-mounted GPU out across the secondary heatsinks to spread the heat out for the fans. One of the fans has the red dragon logo in red which is the only red on the entire card surprisingly. I personally prefer the black on black look on the second fan with the PowerColor logo and the same with the black dragon logo in the bottom right corner of the shroud. 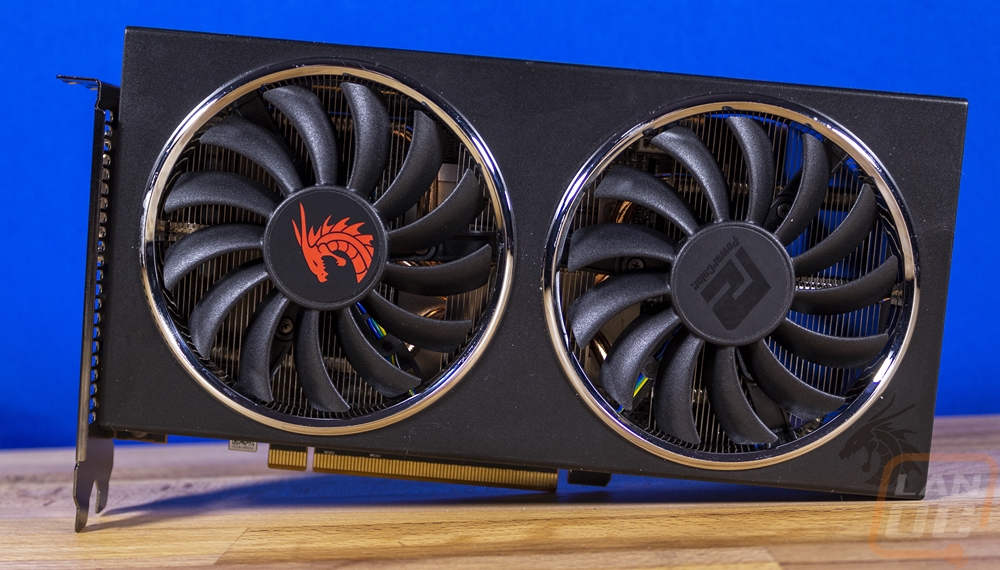 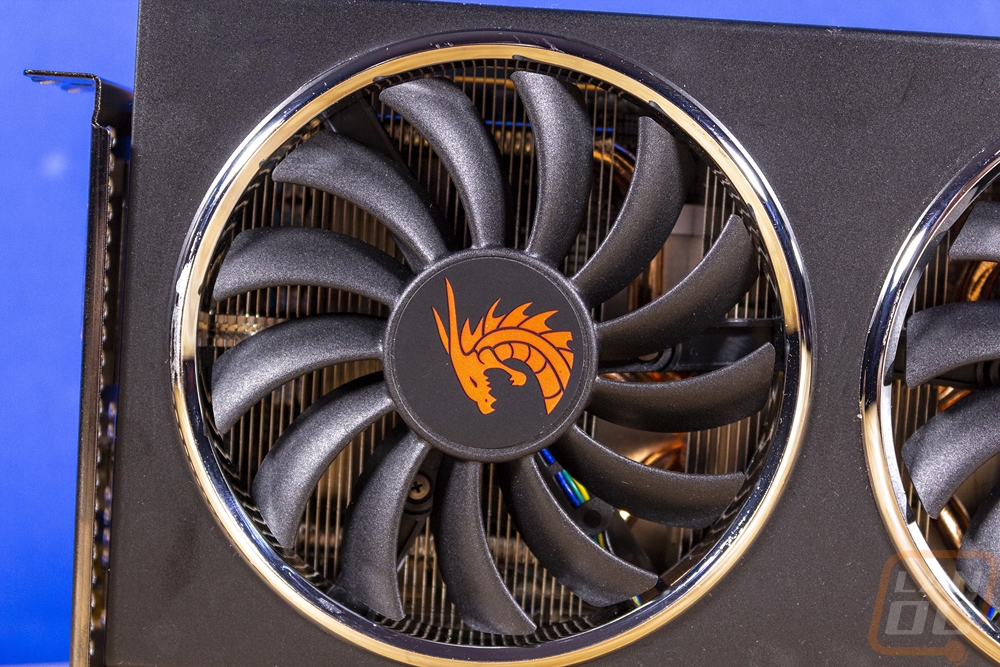 Looking around the edges on the Red Dragon gives us a little more information. For starters, we can see that the squared-off fan shroud continues all the way around including on the end of the card covering about 2/3 of the overall card thickness to direct the airflow down across the heatsinks. That gap, at least at the top and bottom is where the air vents out once warmed from the heatsink. The edge view also shows that the cooler in split up into three sections but in those sections the heatsink goes all the way down to the PCB and even beyond the PCB at the end of the card taking advantage of all of the space possible. The memory black going around the GPU looks to be aluminum or copper with a nickel plating and you can see that the card has a total of three heatpipes that run the full length of the card including dropping down in the middle for the GPU area.

Up on the top edge of the card, PowerColor does slip in their branding in silver on top of the black shroud. I will say though, they didn’t backlight the logo thankfully. I don’t mind the brand being visible, but I hate my PC turning into times square for advertisements of hardware brands. I would still prefer it say Radeon or have the RX 5700 XT model but it doesn’t look bad. Also on the top edge, they have the power connection which PowerColor went with an 8-pin power connection. It is flipped around with the clip side against the PCB and the PCB notched to fit it. This allows them to keep the heatsink as close as possible for better cooling performance. While the Red Dragon is taller, the PCB is still shorter and you can see how the plug stays down low meaning the extra space would be used by the PCIe power cable anyhow. 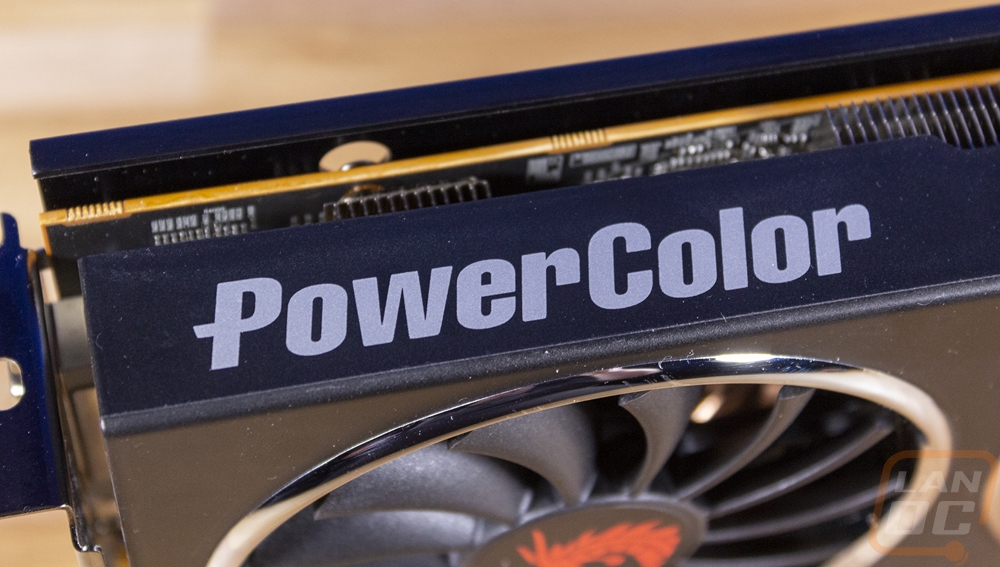 For connection options, PowerColor did a good job of sticking with the older Dual-Link DVI connection for a card that is priced in a range where people may not be running the most modern displays. You get that DVI plug on the left, one DisplayPort in the center, and HDMI on the right/bottom. The other half of the PCI bracket is vented, but the cooler design isn’t really designed to push too much airflow in this direction. I wouldn’t mind seeing the bracket in a black to match the rest of the card and to better batch with more cases, but that isn’t a requirement.

Lastly, we have the back of the Red Dragon and this is the area you are going to see the most in any traditional case design. Brushed aluminum backplate with black finish looks good. It is solid across most of the card except down at the end where the PCB ends and they open up the backplate to function as a vent. The vented area looks good and is functional and it has the Red Dragon logo right next to it, flipped over so it will be readable when installed. 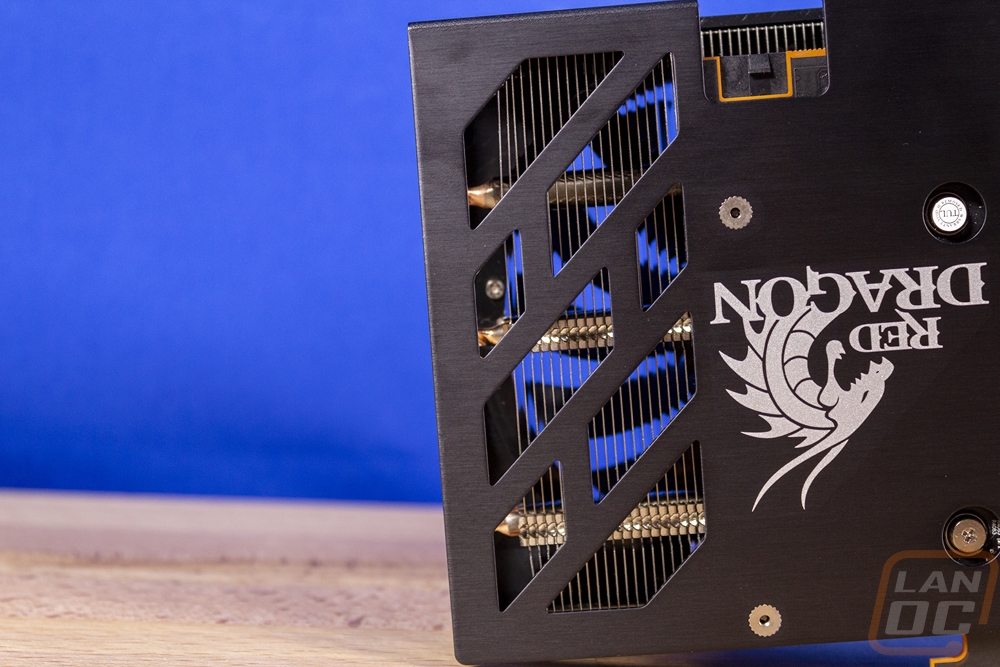 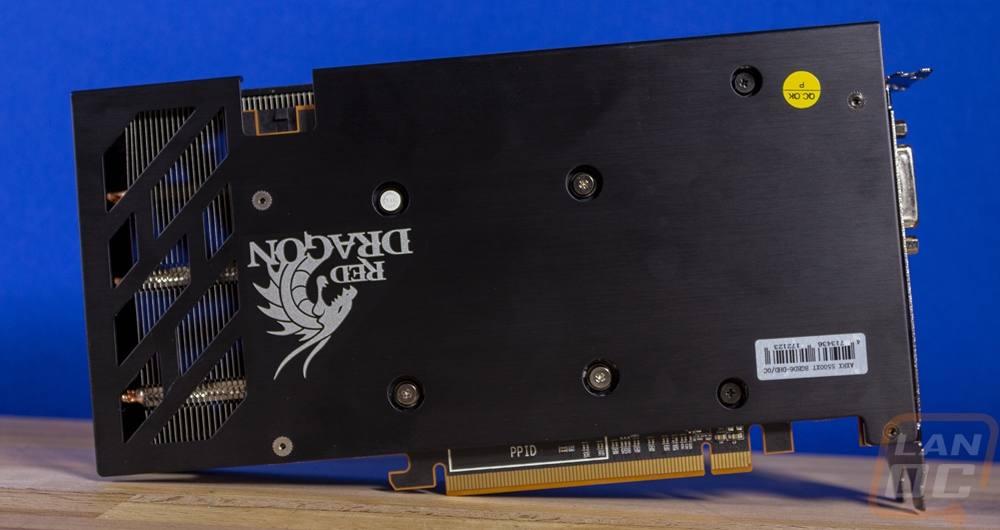 We have 1302 guests and no members online