As always I like to start off my testing with a few synthetic benchmarks. 3DMark especially is one of my favorites because it is very optimized in both Nvidia and AMD drivers. It's nice to not have to worry about it being favored too much either way and the repeatability of the results makes it a nice chance to compare from card to card. For this and all of my tests, I am focusing on how the RX 5700 XT compares with the older RX580 and RX590 from AMD and the GTX 1650, GTX 1650S, GTX 1660, and GTX 1660S from Nvidia. Those cover the price range and more of the RX 5500 XT so it will be interesting how it compares. To start things off I tested in 3DMark with the DX11 focused Fire Strike benchmarks which test three different detail levels Performance, Extreme, and Ultra. The 5500 XT came in above the GTX 1660 but below the RX580 in the Fire Strike Performance test, edging up past the RX580 in the Extreme detail test, and was even higher in the Ultra detail test coming in ahead of the GTX 1660 Super and GTX 1660 Ti as well. 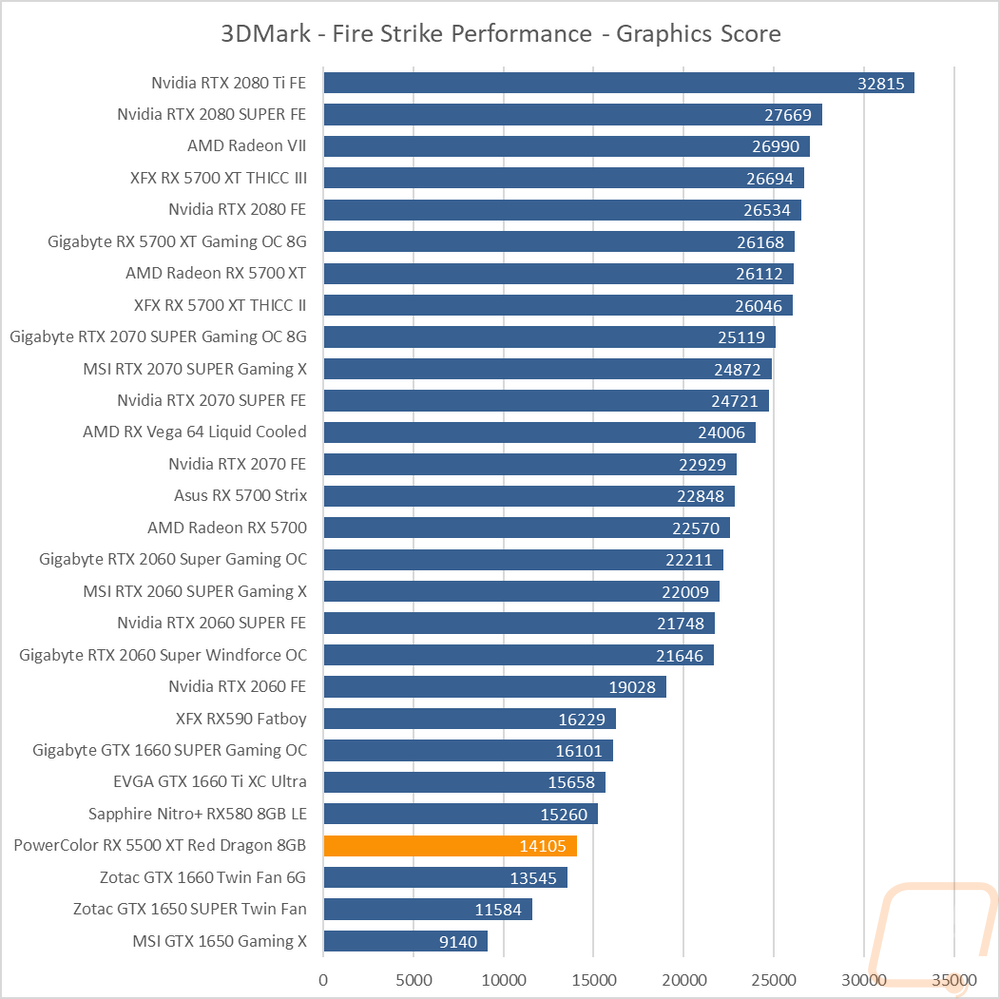 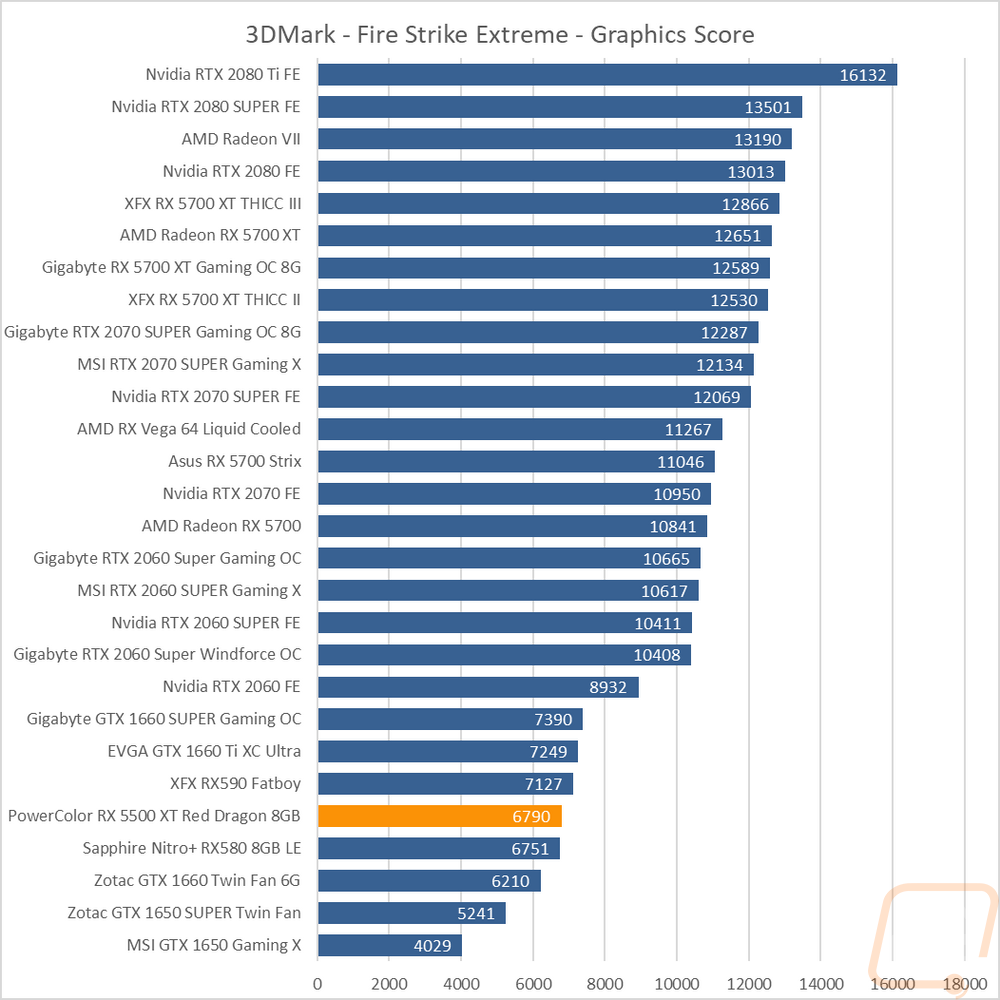 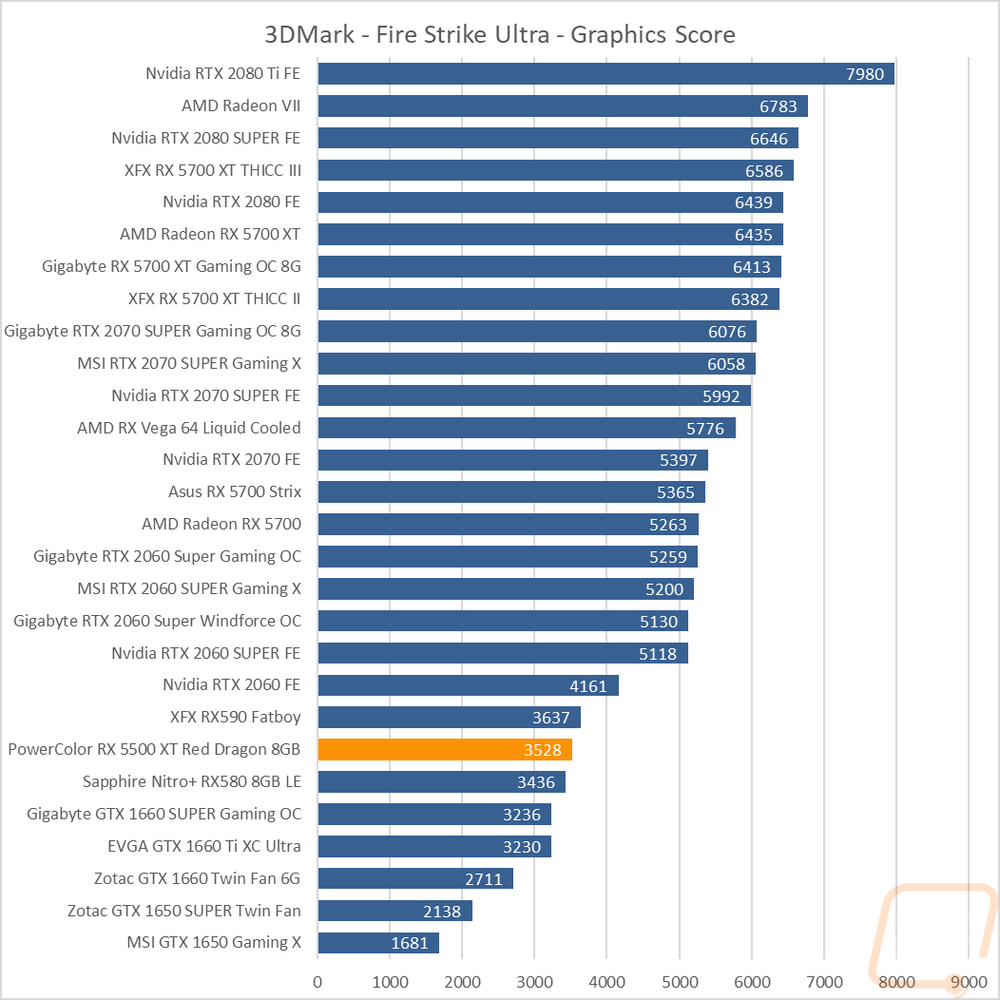 My next tests were in the DX12 focused Time Spy test which is also in 3DMark. Nvidia’s Turing cards have favored Time Spy a lot and it does show here with the 5500 XT not running out ahead of the GTX 1660 or higher cards at the higher detail this time. It does come in ahead of the RX580 and the RX 1650 SUPER and surprisingly close to the RX590 in both tests though. 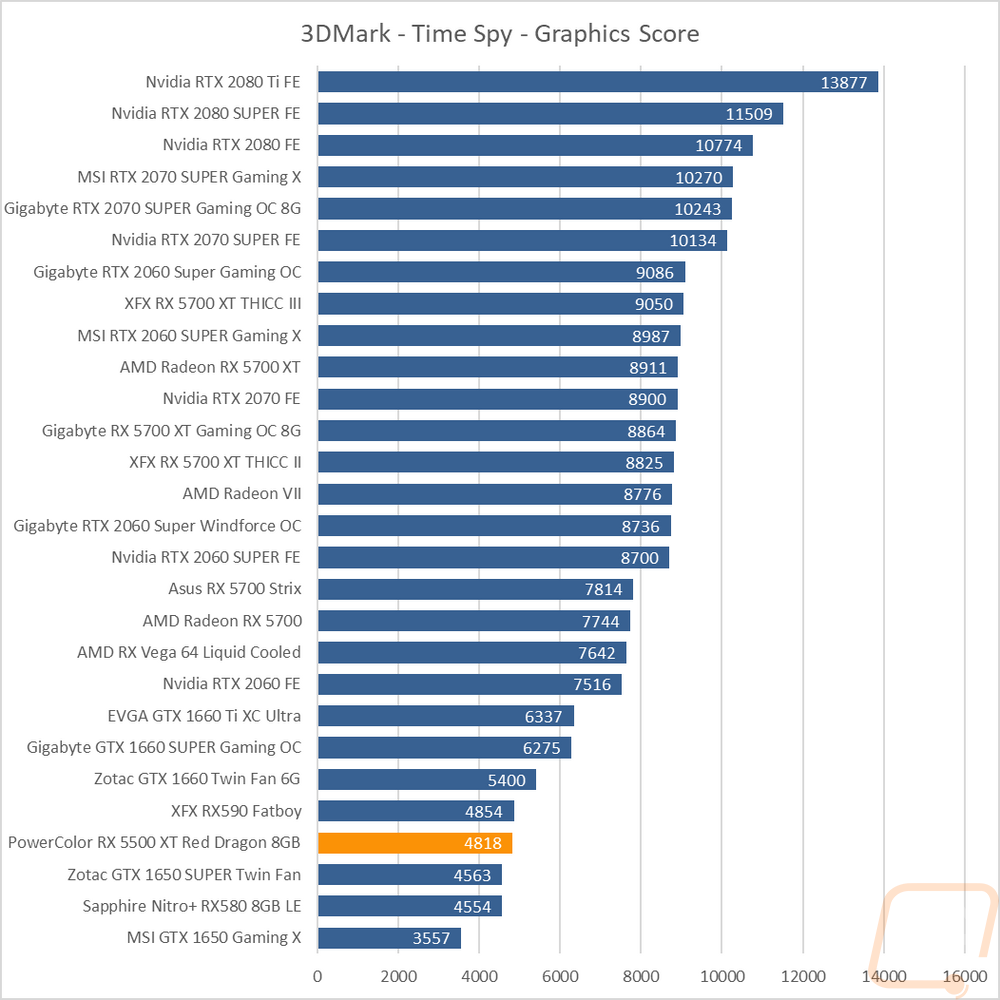 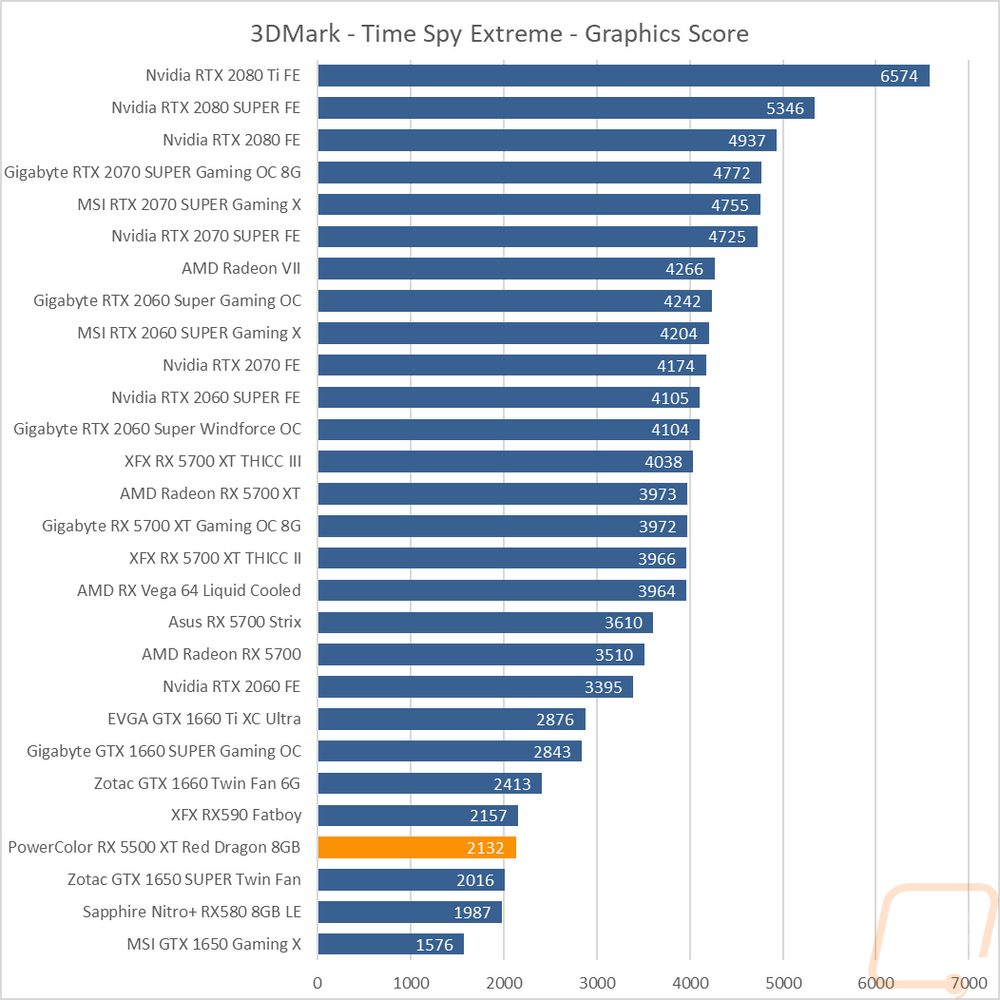 My last test was in Superposition which is based on the Unigine engine. Here I tested twice at 1080p using the medium and then extreme detail levels. At medium detail, the 5500 XT came in just a touch ahead of the overclocked RX590 but with a big gap to the GTX 1660 still. At the higher detail, the RX590 did pull back ahead slightly and in both, it was still out ahead by a noticeable amount in front of the GTX 1650 SUPER. 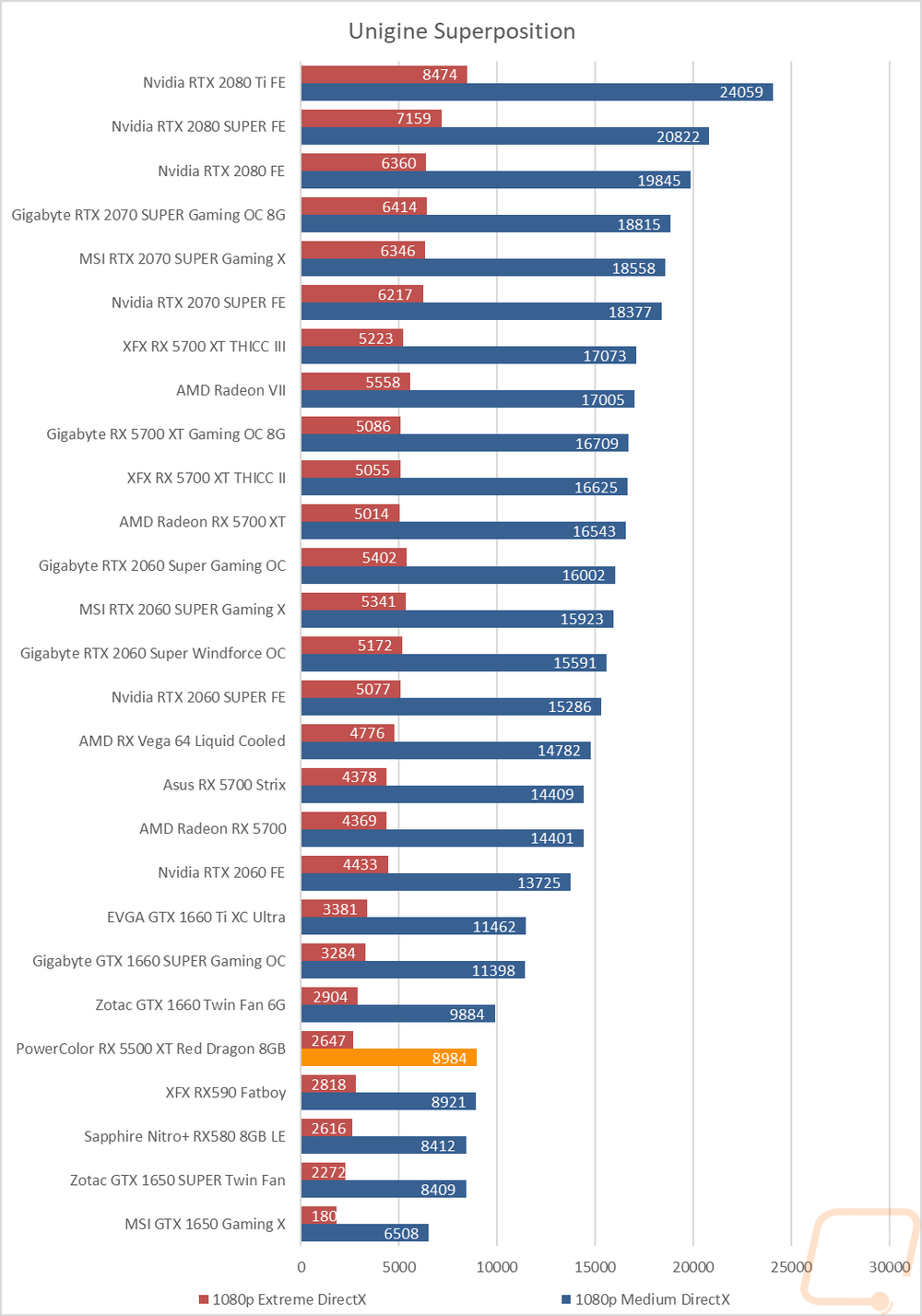 We have 1194 guests and no members online