Power usage is the first I’m going to check out. For this, I ran two tests. On both, I monitored the power usage of our test system using a Kill-A-Watt. To put things under load I first use 3DMark to replicate a gaming load on both the CPU and GPU. With the RX 5500 XT Red Dragon loaded up in 3DMark our test system pulled a total of 266 watts which was 17 more than the GTX 1660. The gap was a lot smaller in the AIDA64 test however pulling 195 watts with both the GTX 1650 SUPER and the GTX 1660 coming 8 watts below. However when you go looking for the older RX580 and RX590 you can see just how much of an improvement AMD has had, the 590 pulls 120 watts more than the RX 5500 XT at around the same performance level. 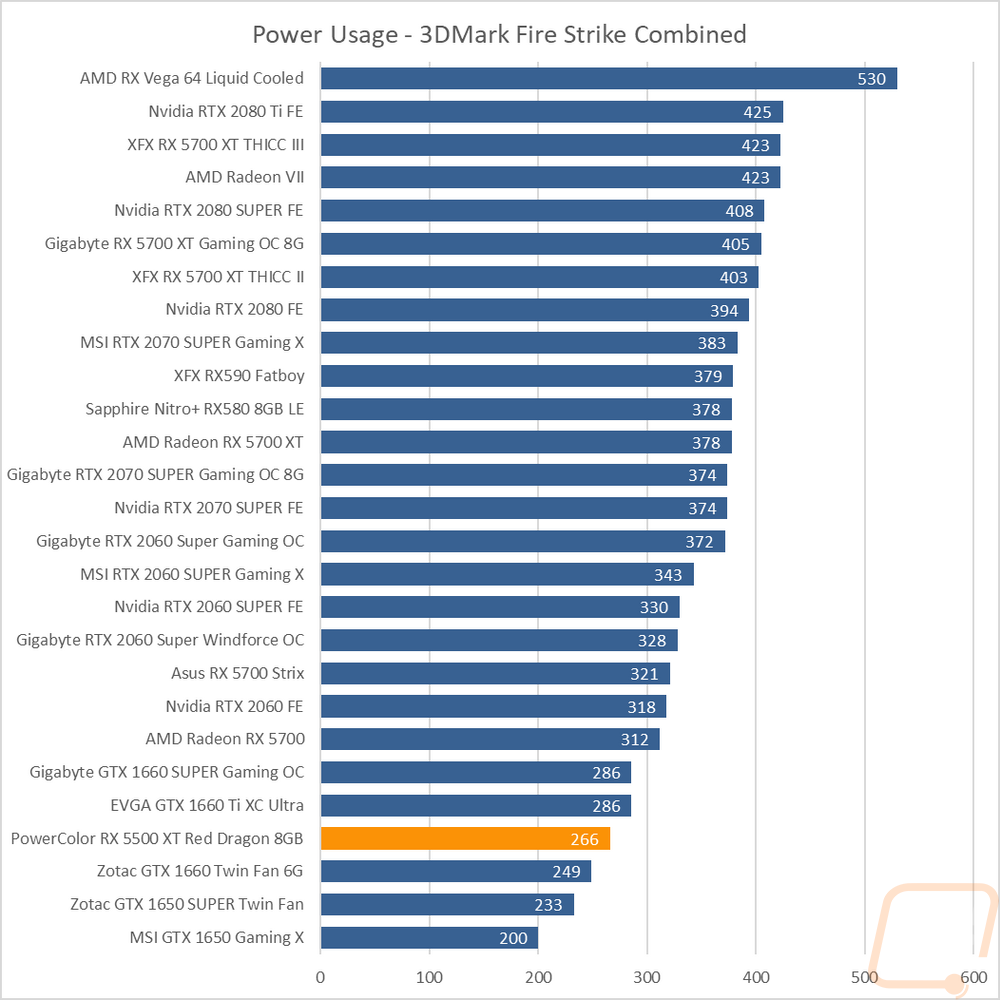 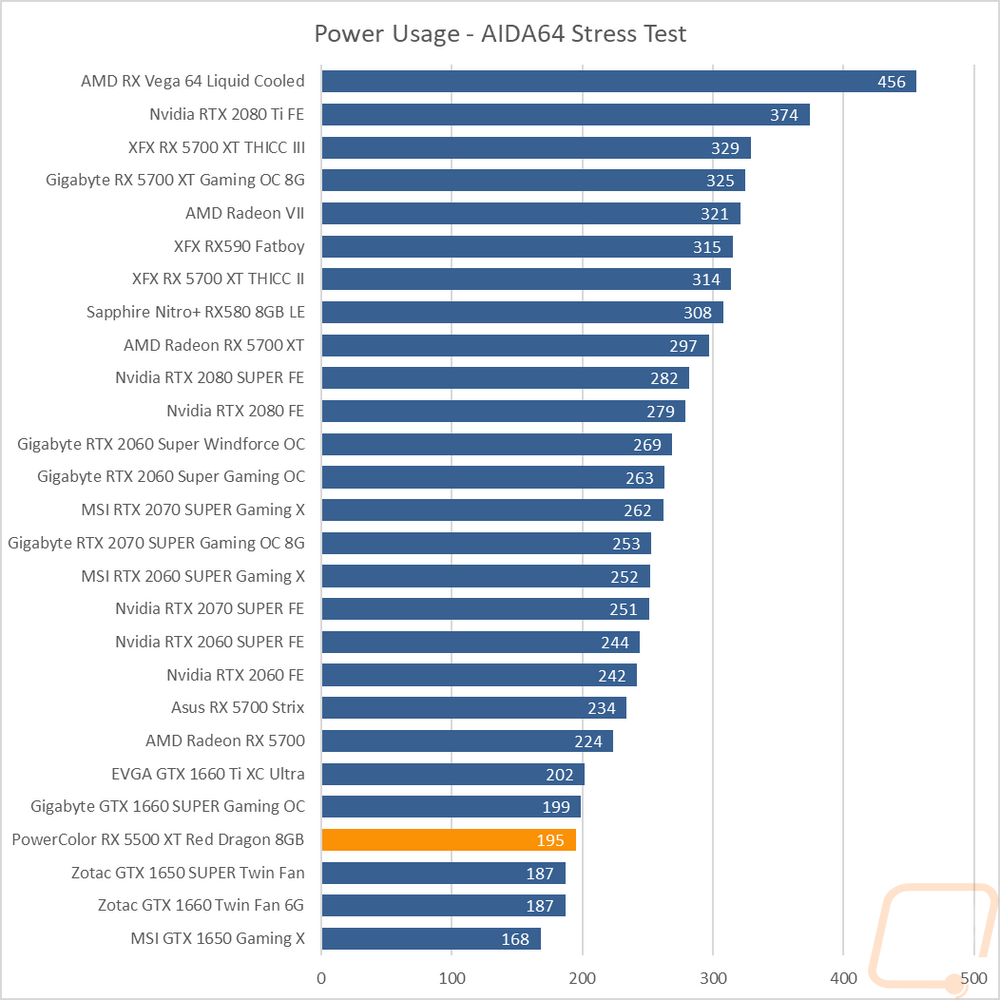 For fan noise, I really had no idea what to expect. I haven’t had any of the PowerColor cards in the office in a long time, with some of the other brands you can get a feel for how well they will do. So for this test, I run three decibel tests, all with the meter setup 18 inches at a 15-degree angle from the fan side of the card. I test with the fans set to 50% and 100%. 100% had both fans running at 3106 RPM. Then my last test looks at a more real-world situation where I load the card in AIDA64 for a half hour and test the noise level once the cooler is at its peak load. The Red Dragon came in a little below the middle of the pack when the fans were cranked up to 100% and the 50% number was similar, which was a little higher than the RPM was in the charts but overall not louder than average and also not spectacular. It was the load result I was most interested in and actually, the Red Dragon came in just in nearly the same spot on the charts with the noise level running at 36.5 decibels which was a touch lower than the card did at 50% fan speed. 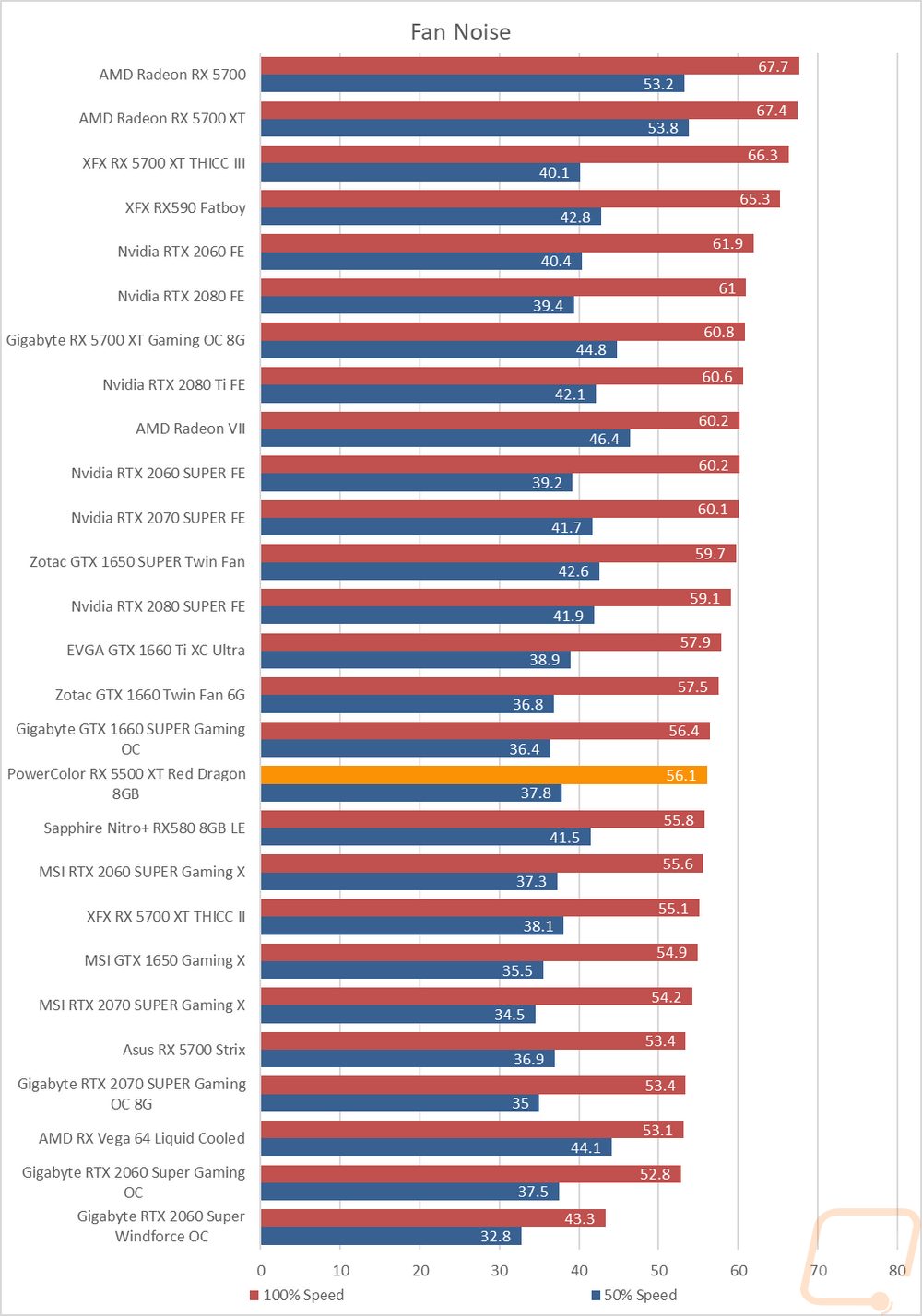 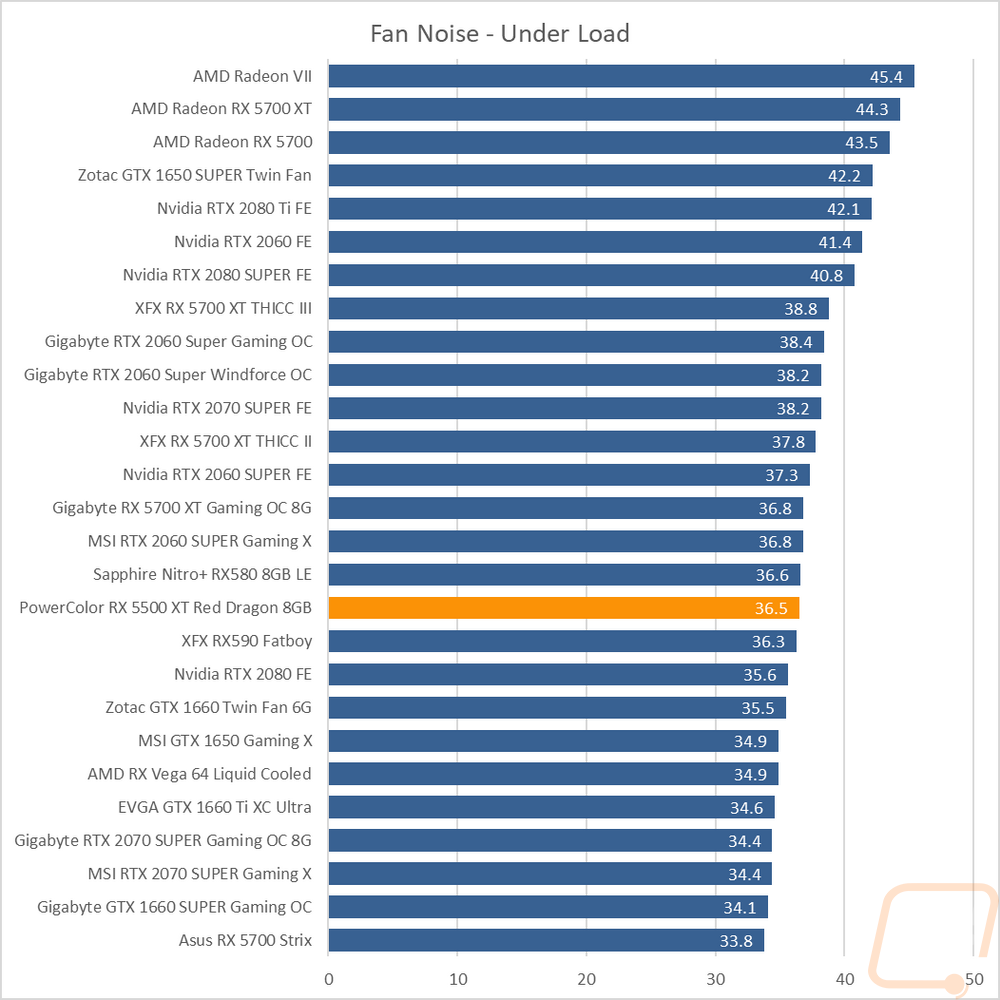 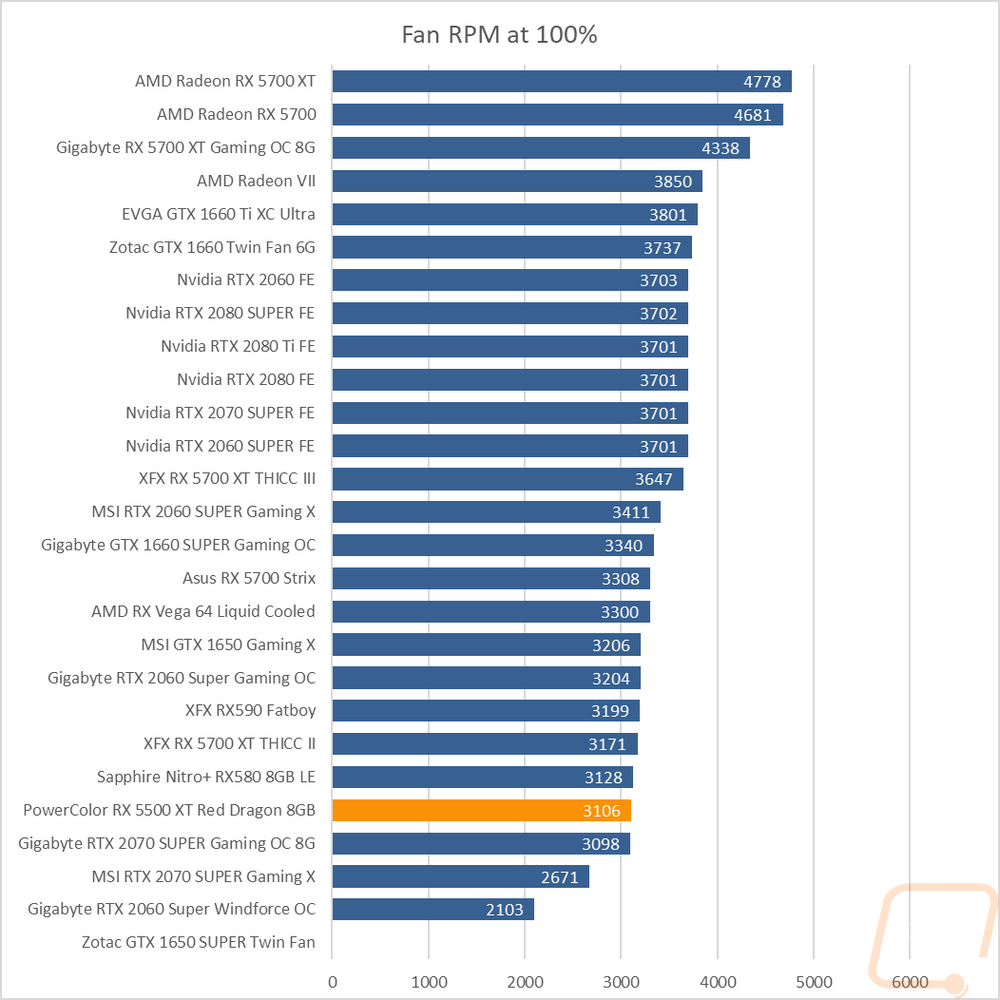 Last but not least, I, of course, wanted to check out the thermal performance of the RX 5500 XT Red Dragon. To do this I used AIDA64 once again to put the card under a consistent load. I waited for a half-hour and checked to make sure the temperature had stopped rising or falling and documented the result. I did this twice, once with the stock fan profile and then again at 100% fan speed. The idea behind the two tests is to see what you will get out of the box and then see what the cooler is capable of and to see if there is any room left for overclocking or to run the card cooler if you want. With the stock fan settings, the RX 5500 XT Red Dragon ran extremely cool, being the lowest of the cards tested at 54 degrees. I was worried that it would be hard to improve on that even with the fans cranked up but it did drop down to 43 degrees which tied with four other cards for being the lowest. This does show that the Red Dragon runs cool but that there is still room left in the cooler as well. This isn’t a huge surprise given that PowerColor did include a proper cooler, which when you get to this price range you start to see simpler coolers, smaller cards, and even aluminum extrusion heatsinks over heatpipes and Sheetmetal fins. 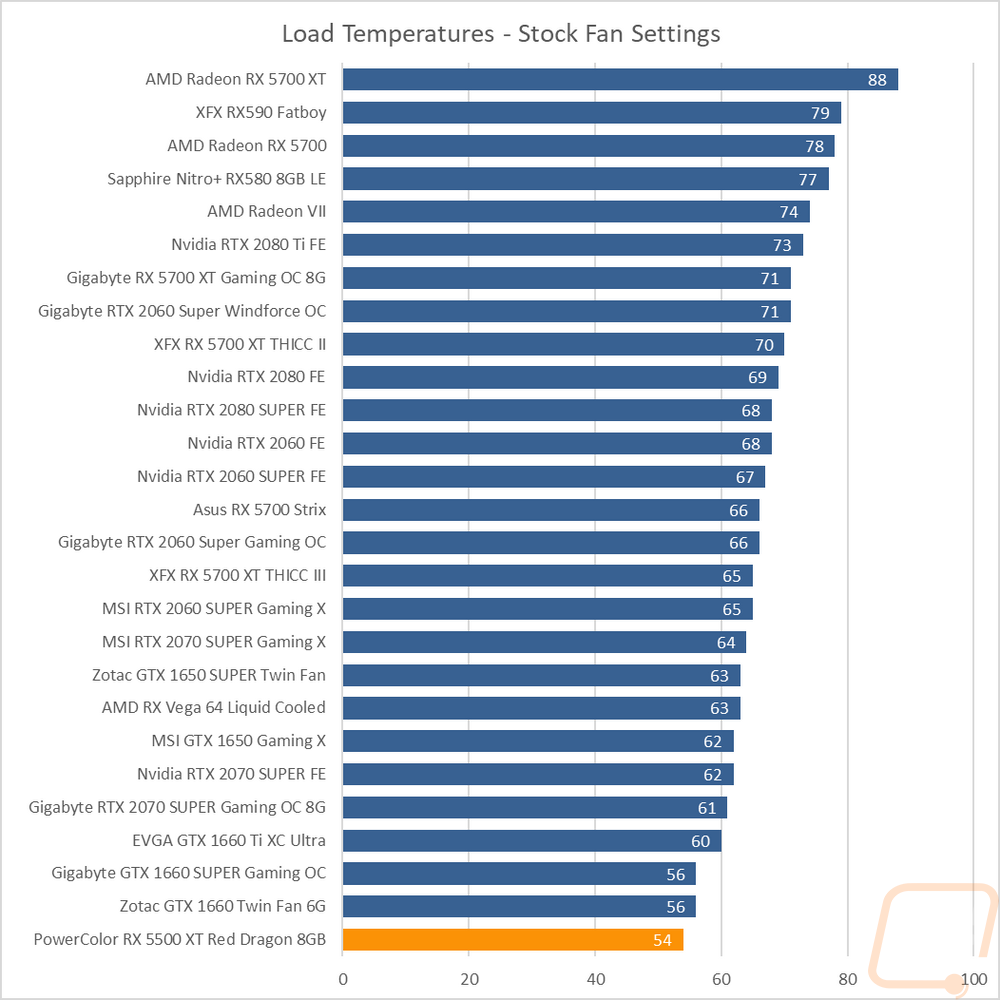 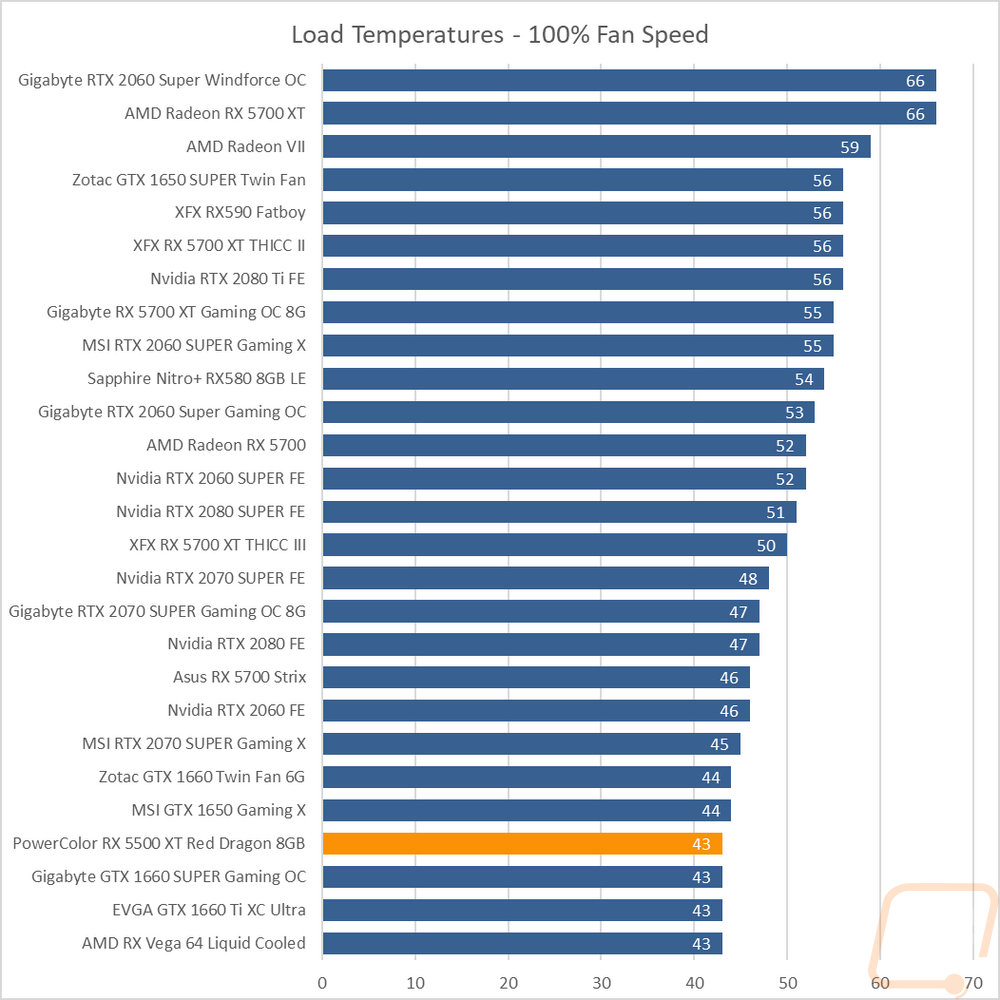 While doing the thermal testing I did also take a look at the Red Dragon with our thermal camera. I wasn’t really looking at the thermals as they can be off, but I was looking for anything unusual like hotspots. On the fan side of the card, you can see that there is a little bit of a temperature difference between the left and right fans, nothing out of the ordinary though. You can also see some of the heat venting out of the bottom around the PCI slots, but because the card runs cool, it wasn’t enough to be concerned even if you are running an M.2 card right under the Red Dragon, though I would still avoid it unless I had too. Up on the top, you can see the heat venting as well, but frankly, the card was still running cooler than the air cooler that I currently have to have on our test system while waiting on replacement parts for the water cooling. Then around on the back, the backplate doesn’t have any hot areas, the metal backplate does a good job of spreading things out with just the vents showing warmer as the air blows out of them. The PCIe 4.0 SSD for our test system, on the other hand, looks hot compared to how cool the Red Dragon ran. 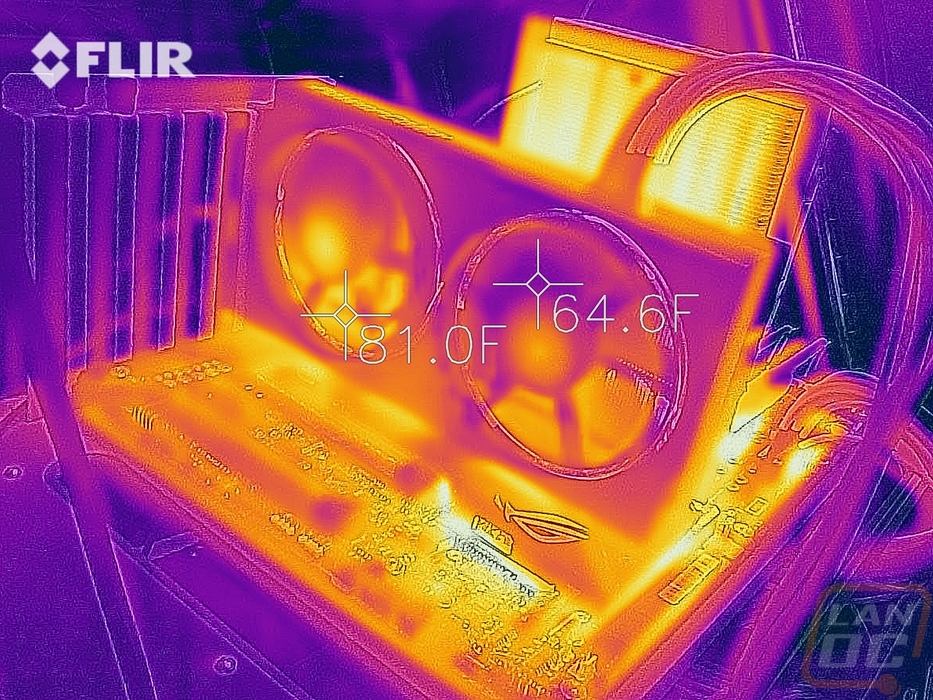 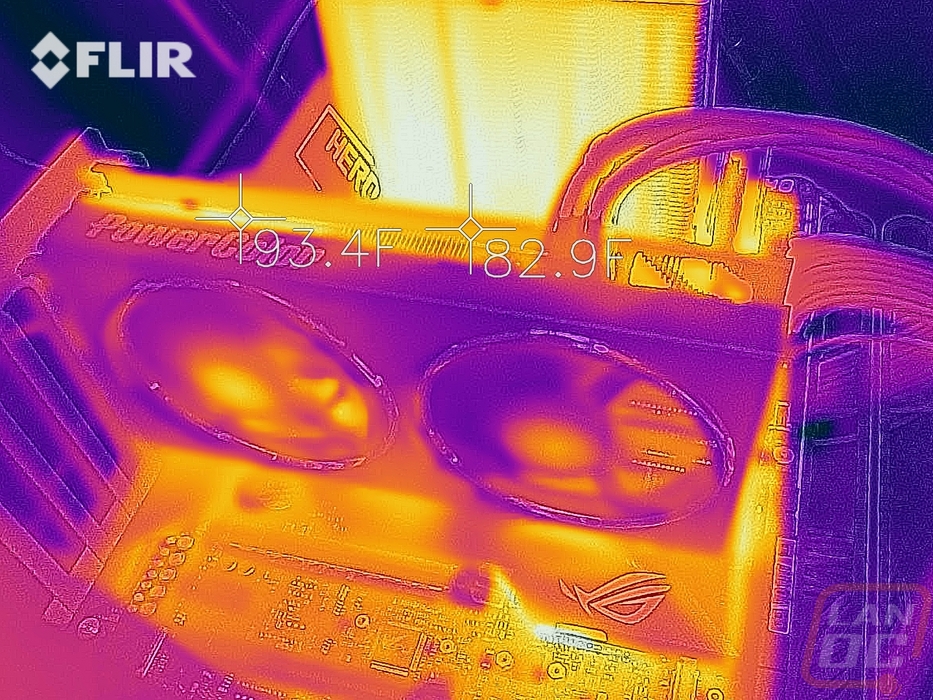 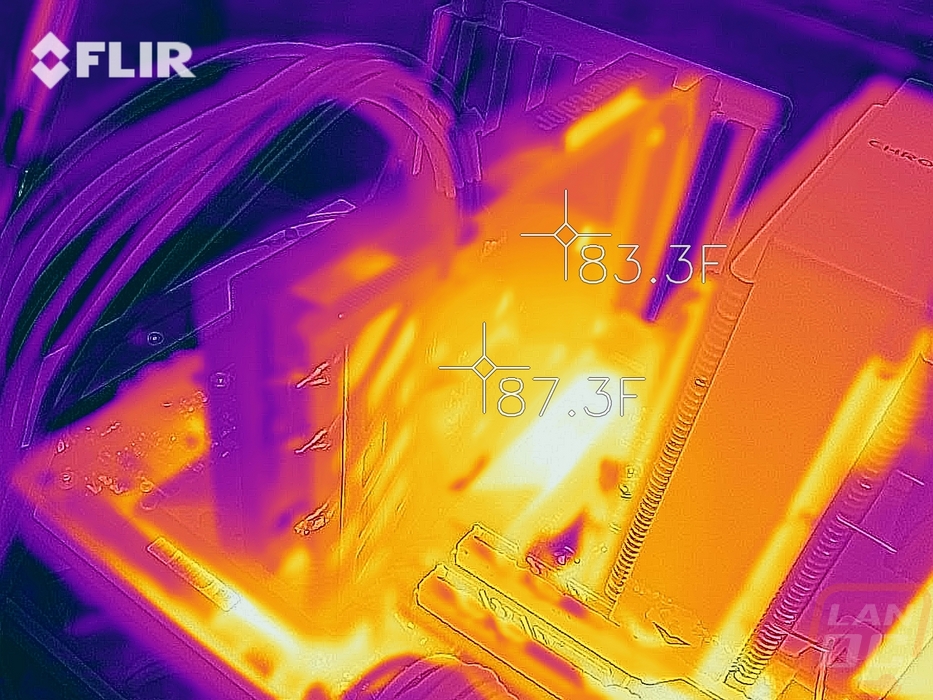 We have 1115 guests and no members online