Much like the AMD RX 5700/5700 XT launch, I am excited to finally sit down and see how the new RX 5500 XT stacks up. It is almost too late for the holiday shopping season, but it did get here for those of you who didn’t get all of your shopping done during Black Friday and Cyber Monday. But is it worth it? Well, looking at the performance, I was a little concerned that the GTX 1660 which isn’t a much more expensive card might still be the better option, of our tests the GTX 1660 was faster in 7/16 in game tests, but that did leave the RX 5500 XT ahead in 9. I was curious more about that so I also went through and averaged out all of our results with all of the cards in this range and you can see them below. The RX 590, GTX 1660, and the RX 5500 XT do all land really close when you average everything out but the RX 5500 XT does have the lead. You can also see just how big of a jump it is when you move up to the GTX 1660 SUPER as well. 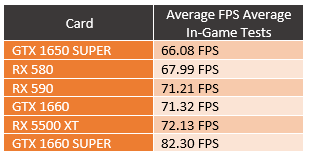 With all of that in mind, the RX 5500 XT ends up being a great option if you are planning on gaming at 1080p. It could play anything I threw at it and only a few of the games would need the detail to be turned down at that resolution. It did fall behind a little with compute tests, but I suspect most of you are more worried about gaming performance more than that. The PowerColor Red Dragon had a few other things going for it as well. I really like the new styling they have gone with, it is a lot simpler and cleaner than in the past which is exactly what I prefer when picking out a card. It also doesn’t have any flashy RGB and with the exception of just the one red sticker on one fan, it doesn’t have any other colors that would mess things up if you wanted it to match your build. The cooler performed extremely well, it ended up being the coolest running card of all of the cards tested. Its noise performance was average, but not an issue. I also really like what they did with the backplate. For one, it is brushed aluminum where a lot of cards at this price point won't have one at all or get a plastic backplate that holds heat in. But it also has a good looking vent that helps with the cooling and adds some style as well on the most visible part of the card. As for power usage, AMD talked about how much things have improved and it has. The RX 5500 XT pulls 120 watts less than the RX 590! But the GTX 1660 and the other Nvidia cards in this card are still a touch ahead. I wouldn’t call it bad power usage, but when there are almost no bad things to point out about the card this is how trivial the downsides get lol.

Of course, performance is only relative to the pricing and I don’t really know enough about the Red Dragon that I tested. The RX 5500 XT with 8GB of memory has a suggested retail price of $199.99 from AMD but until this card launches, I don’t know how close the Red Dragon will end up being to that price point. Nor do I know if the stock will stay in considering how close we are in the biggest part of the shopping season. But currently (as of the night before launch) the GTX 1660 is starting at $209 with a promo code on a few cards, but most are selling for more. That puts the RX 5500 XT right on par with it and with just a hair better performance. It also has a game bundle at launch that gets you Monster Hunter World: Iceborne Master Edition and 3 months of Xbox Game Pass where the GTX 1660’s don’t have a bundle right now. That said the RX590 is a steal considering its performance with a few cards selling at $179.99 and with Borderlands 3 or Ghost Recon and the same 3 month Xbox Game Pass.

In other words, the RX 5500 XT is a good buy, assuming the AIB cards or retailers don’t raise the prices up from the $199.99 suggested price. If they do the GTX 1660 starts to come into consideration. But AMD's bundled games help. For those looking for closeout deals, the RX590 can be an even better pickup and has IMO a better game bundle for cheaper if you hurry but those aren’t going to last! Beyond that, I hope to get a look at the 4GB model and to see what some of the other AIB’s will have to offer going in to the new year. But right now the PowerColor is looking like a great option with almost no downsides. 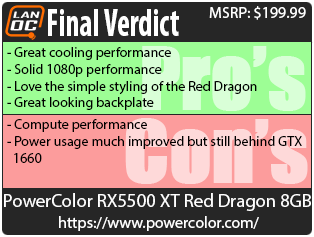 You might call him obsessed or just a hardcore geek. Wes's obsession with gaming hardware and gadgets isn't anything new, he could be found taking things apart even as a child. When not poking around in PC's he can be found playing League of Legends, Awesomenauts, or Civilization 5 or watching a wide variety of TV shows and Movies. A car guy at heart, the same things that draw him into tweaking cars apply when building good looking fast computers. If you are interested in writing for Wes here at LanOC you can reach out to him directly using our contact form.
Discuss this article
Log in to comment
Posts in discussion: PowerColor RX 5500 XT Red Dragon 8G

We have 1287 guests and no members online