Like the previous RTX cards, Nvidia went with the same dual axial fan design on the RTX 2060 Founders Edition card. In fact, when you first see the card there aren’t any obvious differences from the original RTX 2080 cards. You have the same black area in the middle with the model name in chrome letters. The fan design is the same and even has that same machined aluminum cap that Nvidia has used on all of their designs for a few generations now. It wasn’t until I put the RTX 2080 next to the RTX 2060 that you can see that the card is shorter. It isn’t, however, any shorter than the RTX 2070, they share the exact same cooler size and design with the exception of the model name in the middle. 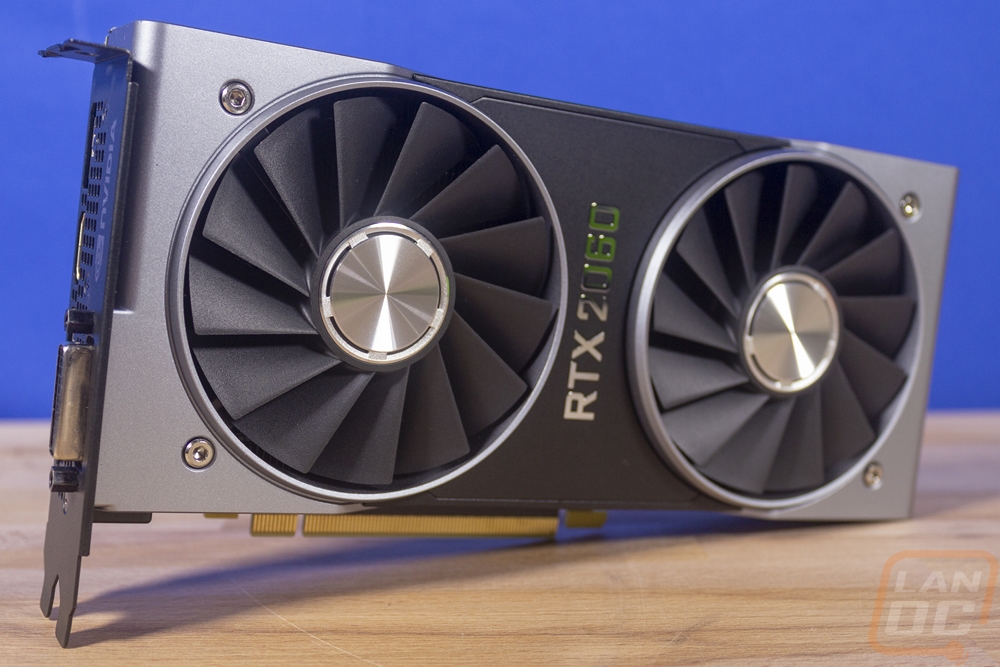 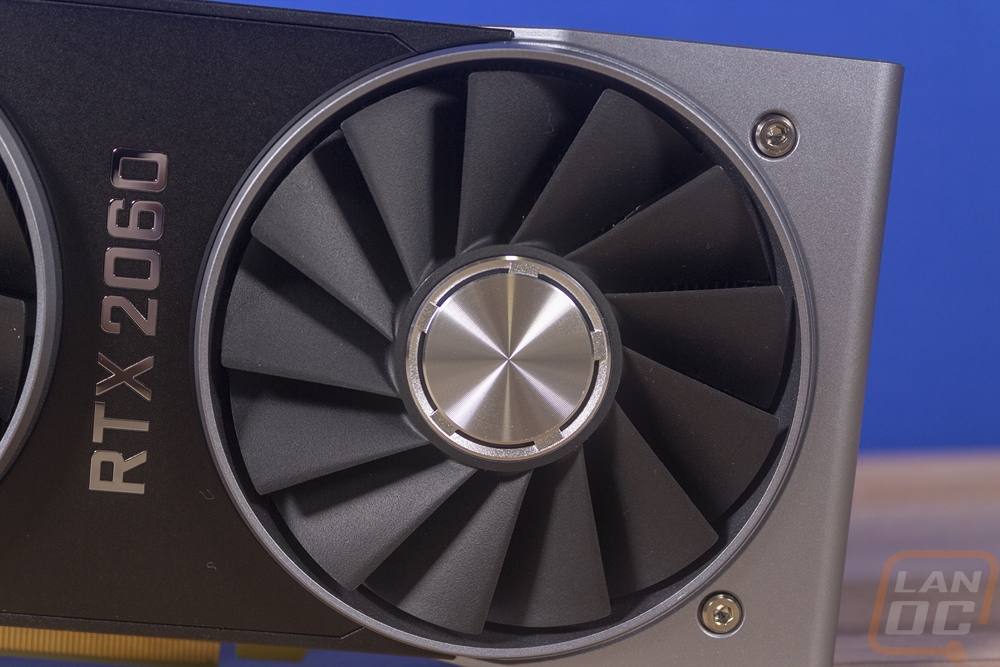 Now that Founders Edition cards are using axial fans that blow down on the PCB it also means that all of that warm air now is venting into your case. On this design, you can see the ventilation on the top edge of the card and on the bottom. This does give us a chance to check out the cooling though. I love that Nvidia went as far to make sure the heatsink has a black finish to blend in. The heatsink runs the full length of the card. They do use heatpipes to pull heat from the GPU out across the long heatsink, but unlike the AIB cards, Nvidia kept the heatpipes hidden up under the heatsink close to the middle so they aren’t visible from the top or bottom. Again, all to keep that clean design. The top edge of the card does have the same Geforce RTX branding as the other RTX cards and once again it is backlit with just green lighting. I still love the new logos material though, the clear plastic looks like chrome when not lit up which matches the branding on the front between the fans. Also, I noticed our specific card has an odd bend to it, you can see it from both the top and bottom views.

As for the end of the card, the all metal fan shroud wraps around here properly and they have two mounting points to be able to secure the card to prevent GPU sag. This is also where they put the power connection, just like on the RTX 2070. Remember other than the branding on the front this cooler is basically the same. With the power facing this direction it does mean that the card needs additional space as the end, but being shorter than the RTX 2080 it should have that in most cases, tighter cases may not work. It does also mean that tighter cases as far as height goes will work better though now that the power isn’t facing up that direction. As for power, even with the lower TDP of 160 watts for the RTX 2060, they still went with the same 8-pin power connection. 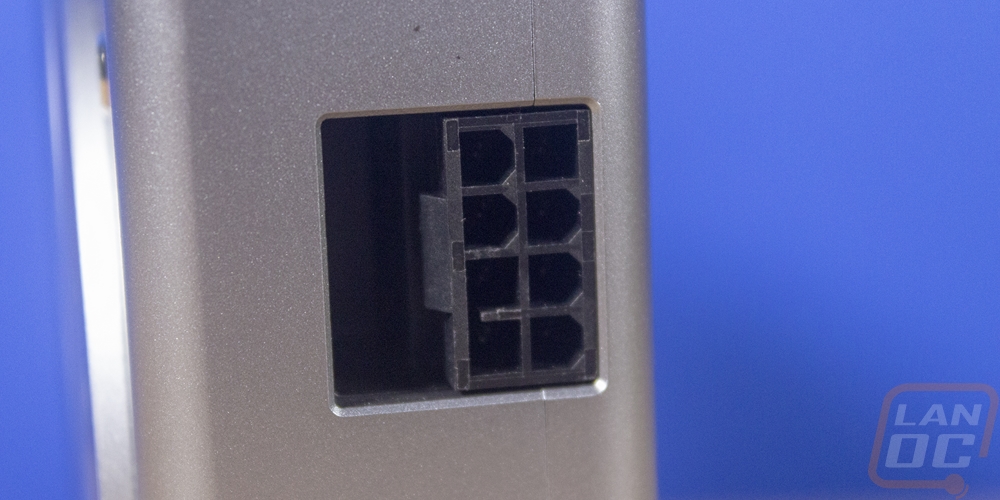 You could kind of see it on the end of the card, but the backplate for the RTX 2060 Founders Edition wraps around the end and is full coverage on the back. It has the same silver finish that all of the RTX Founders Edition cards have had and I’m still not sold on this color. I preferred the black backplates from the past, mostly because most PCs have black interiors. So this card is going to stand out in a traditional case where the backplate faces up. It does have another chrome RTX 2060 logo here in the middle with groves in the backplate going around it. Then down on the end, they have all of the normal regulatory logos as well as the serial number and barcode on stickers. Stuff that would normally be on the PCB but isn’t visible with the backplate. 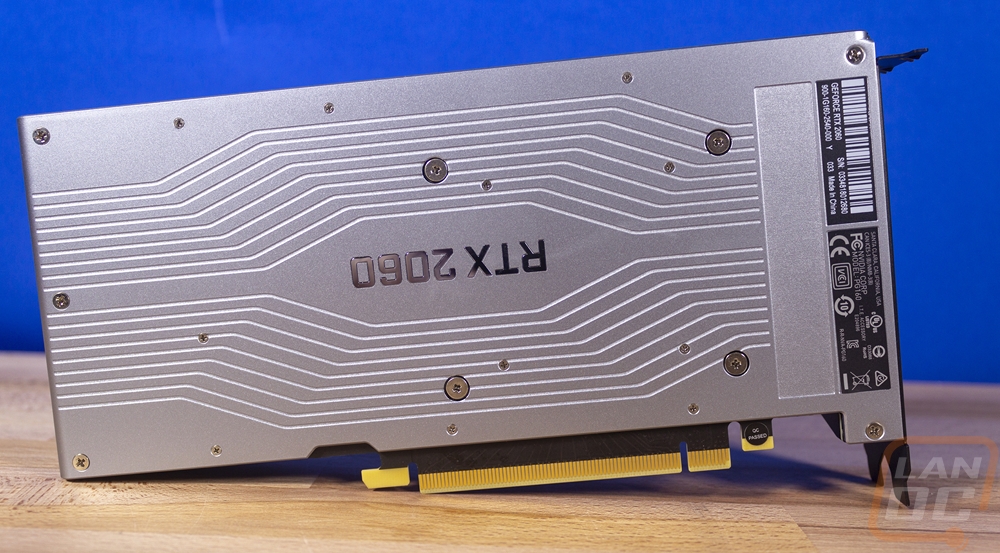 Again like the rest of the card on the exterior, the PCI bracket has the same configuration as the RTX 2070 Founders Edition. That means you get two DisplayPort connections and one HDMI. They traded the third DisplayPort to bring back the DVI. This is really important in this price range because a lot of people are still running older DVI monitors. Then the last connection is down in the bottom right corner, the tiny Type-C connection. This is a VirtualLink connection for future VR headsets. The idea here is that this is able to push the display connection, USB, and additional power all at the same time. The goal is to be able to in the future just plug your headset right in and not need a control box like they all need right now. The bracket itself is blacked out, which looks amazing when installed and it has an Nvidia logo printed on it as well. There is a little bit of ventilation with holes in the bottom 2/3rds of the bracket but remember the new cooler design isn’t pushing air this way very much anyhow.

When you pull that all metal shroud off as well as the cooler. Up under all of that, you will actually find a shorter PCB than the length of the card. This isn’t the first time Nvidia has gone this direction. The RTX 2070 did the same thing and they did it with the GXT 1060, GTX 960, and GTX 760 as well. With the GTX 1060, they did introduce a new twist where they ran pigtails over and moved the power connection to the end of the card. They did the same thing on the RTX 2070 and again here, only with it facing out the end, not the top. Not everyone you should this is going to love this design and it is without a doubt a potential point of failure but I don’t think it has been an issue with the 2070 yet or an issue with the GXT 1060 FE cards as well. As for the PCB layout, well you have the GPU offset to the left above the PCIe connection and to its left and above it the 6 DDR6 chips to reach the six gigs of VRAM. They run through a 192-bit interface, which is one of the big differences between the RTX 2060 and the RTX 2070, that and the RTX 2060 only uses 2/3rd of the TU106 GPU. Then over on the right, you have the VRM with the power pigtail and below that the connection for the cooler's fans and lighting. 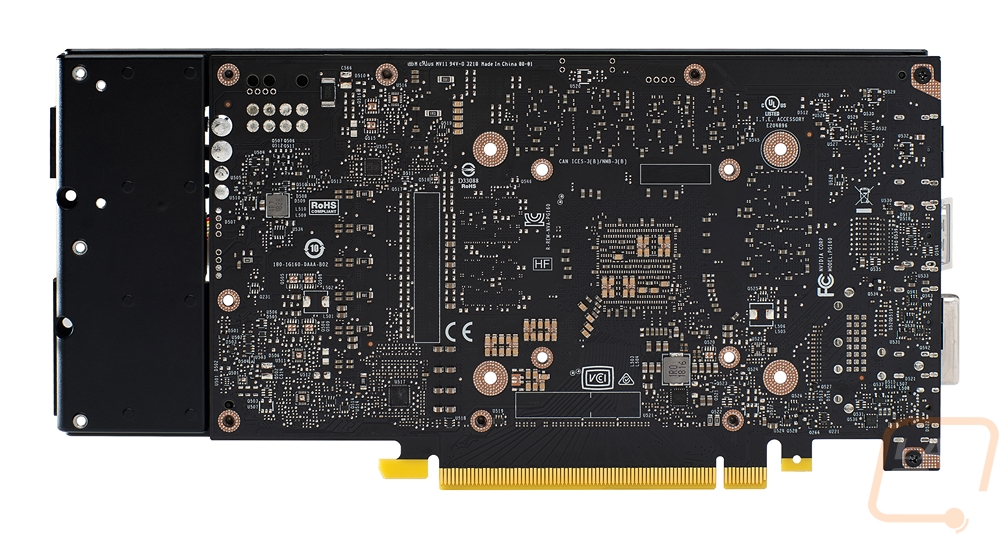 It's been pointed out with all of the RTX cards, but they do have at least some RGB capabilities, some people have even had their cards accidentally have red or orange lighting. But the stock lighting is locked as the normal Nvidia green. While it looks good, this is still one of the big things that I think could be improved. Green doesn’t go with every build. That said it is just the GeForce RTX logo on the top edge of the card as you can see in the photo below. 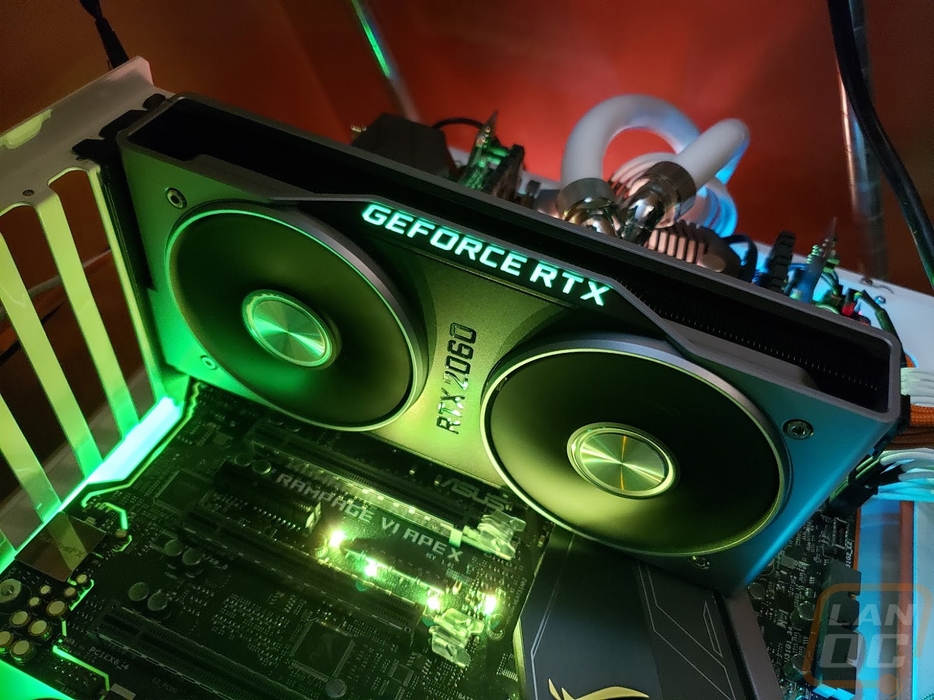 We have 1407 guests and no members online