Now gaming performance (or compute performance) is the most important aspect of picking out what card you need. But that really only gets you to which GPU you need. From there you still need to pick out a card model and that is where some of our other benchmarking comes into play. Depending on your usage power, noise, and temperatures will play different roles in your decision.

So this is where I take a look at all three. My first tests take a look at power usage. For aftermarket cards, this will change depending on how they overclock the card and it also plays a role in temperatures as well. But for now, I’m just curious where the RTX 2060 stands compared to its overall performance. I test using two different situations, one I run 3DMark Fire Strike using the combined load test that puts a game like load on the CPU and GPU. Here the RTX 2060 and the rest of the test bench pulled 365 watts through the Kill-A-Watt. This was basically right there with the GTX 1070 Ti which the RTX 2060 performs right with and sometimes just above in our testing. For comparison, the much slower RX590 is another 24 watts higher. In my second test, I use AIDA64’s stress test to load the video card up without loading the rest of the system and check the wattage usage there. Again the 1070 Ti was right with the RTX 2060 with the Founders Edition pulling 259 watts here. 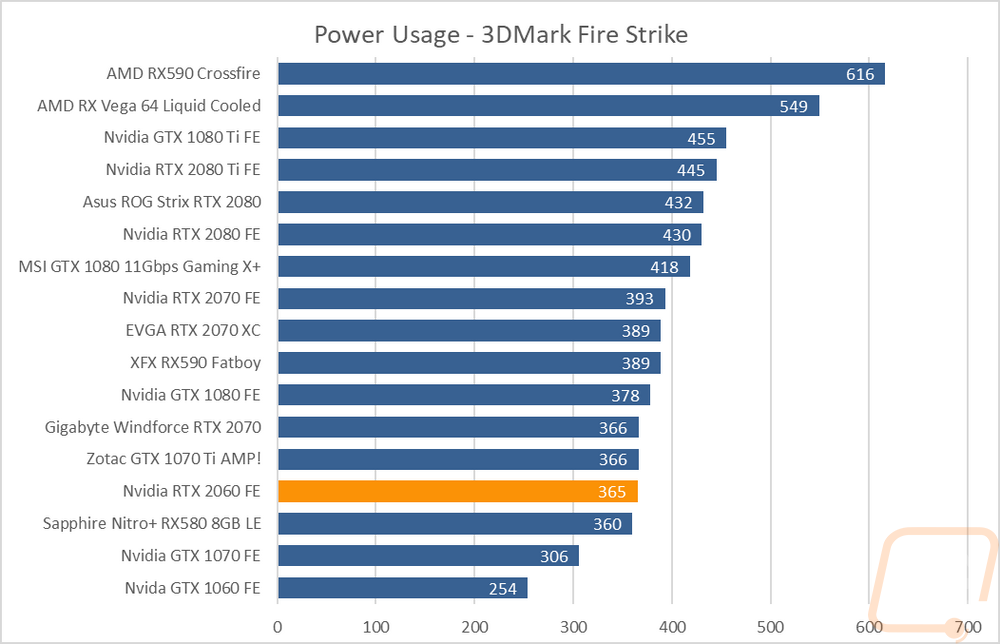 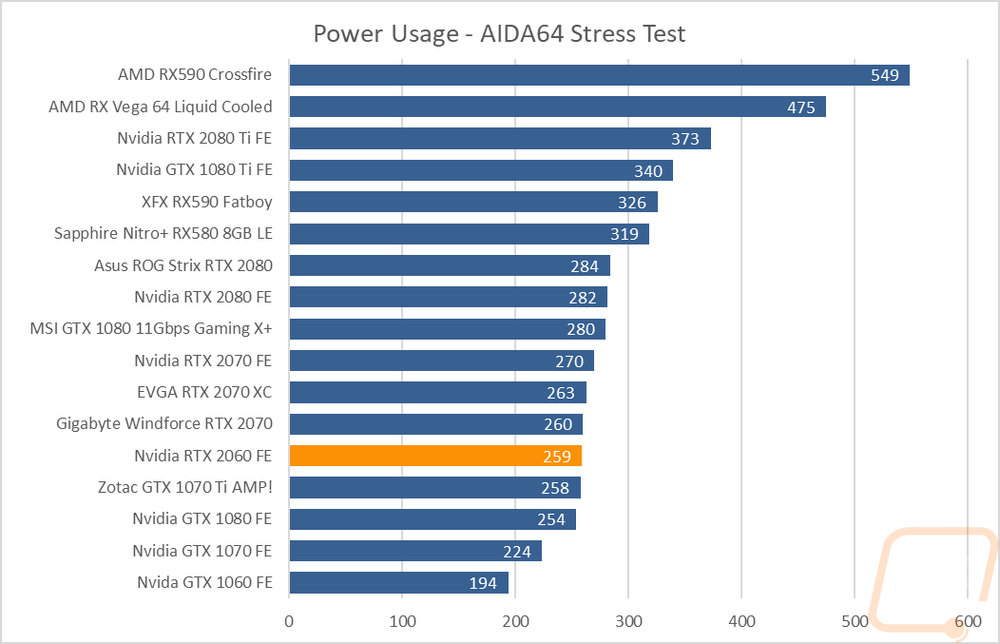 Next, I take a look at the fan noise levels. I test by using a decibel meter setup 18 inches away from the test system at a 45-degree angle from the fan side of the GPU. For consistency, I test at 50% and 100% fan speeds. Keep in mind this isn’t testing in game noise levels, I am only looking at how loud the fans are in general. In game, testing is inconsistent and depends on the room temperature, how demanding the game is, etc. Considering the RTX 2060 Founders Edition has the same cooler design as the RTX 2070 I wasn’t at all surprised to see that they performed similarly. Compared to the last generation of Founders Editions they were louder at full speed because of the addition of a second fan, but as you can see in the second graph the fan speeds have come down slightly. 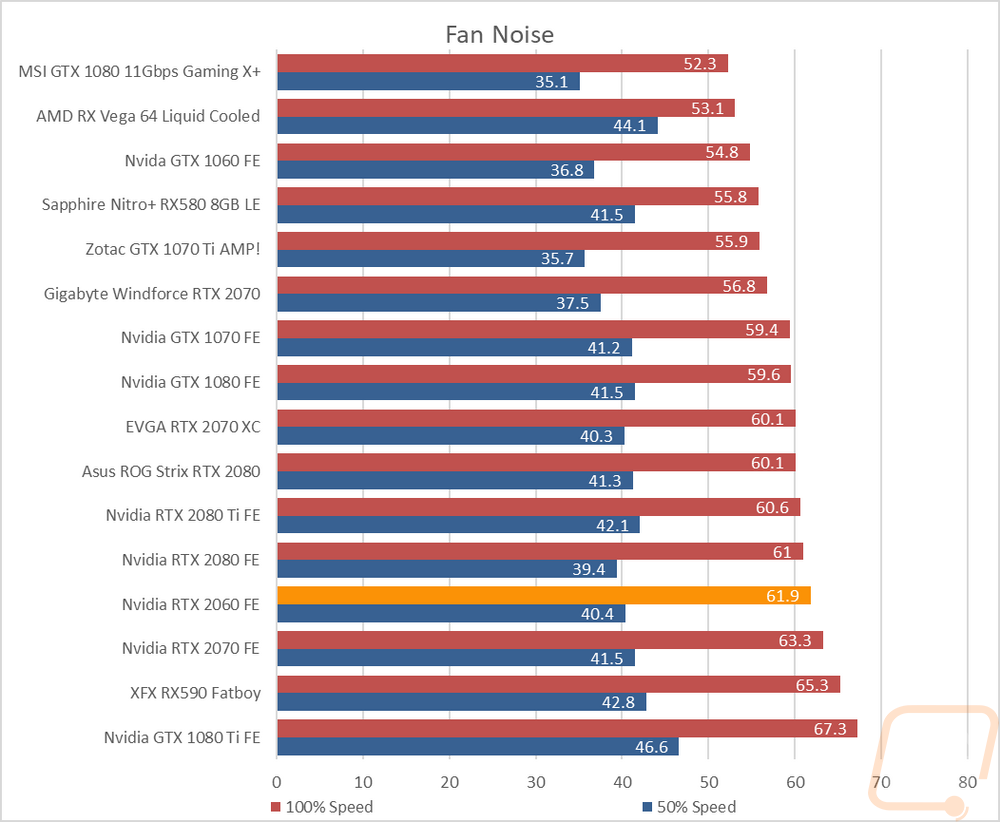 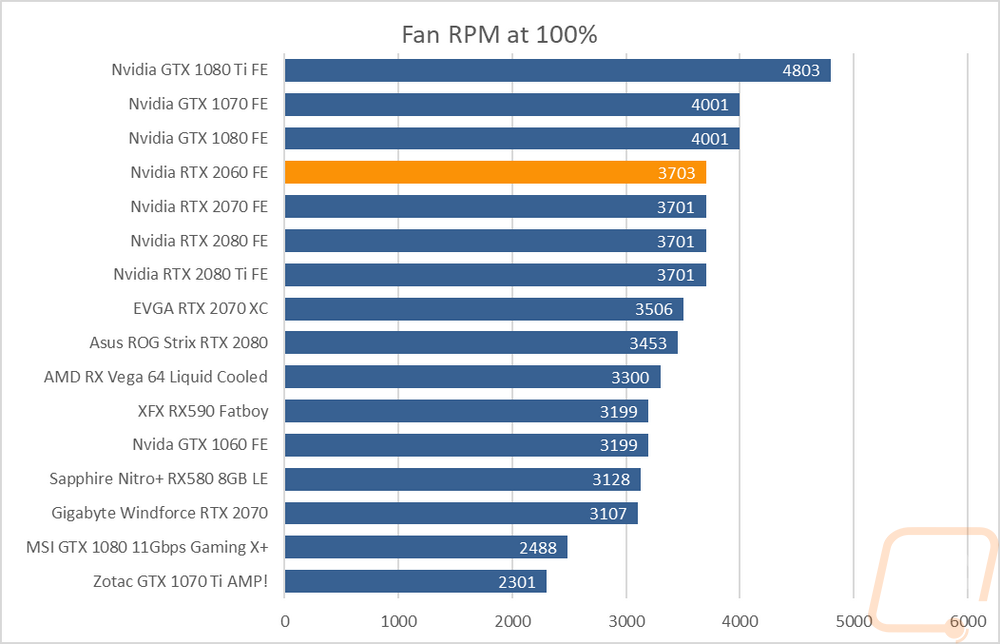 For temperature testing, I went back to AIDA64 again to put the RTX 2060 FE under a solid load. I tested twice, once with the stock fan profile and then again with the fans cranked up to 100%. Letting the card cool down in between each test. Each test was run for 30 minutes after confirming that the temperature rise had leveled off. At stock fan speeds the RTX 2060 performed relatively well, especially when compared to the older blower style cards. I reached 65 degrees, as you can see through the aftermarket cards all still top this chart. The 100% fan speed test is just to see how much room is left for cooling performance. Here the RTX 2060 FE only reached 46 degrees showing the cooler designed for the RTX 2070 when run on the RTX 2060 has a lot of headroom. This can be used for overclocking, or it is also an indication that the fan won’t need to run as often or as fast keeping the noise down. 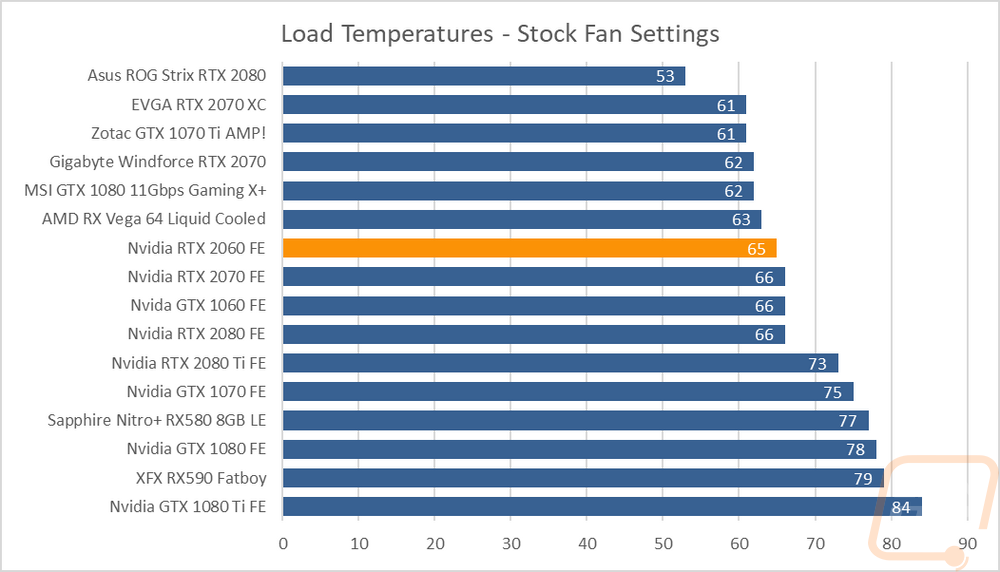 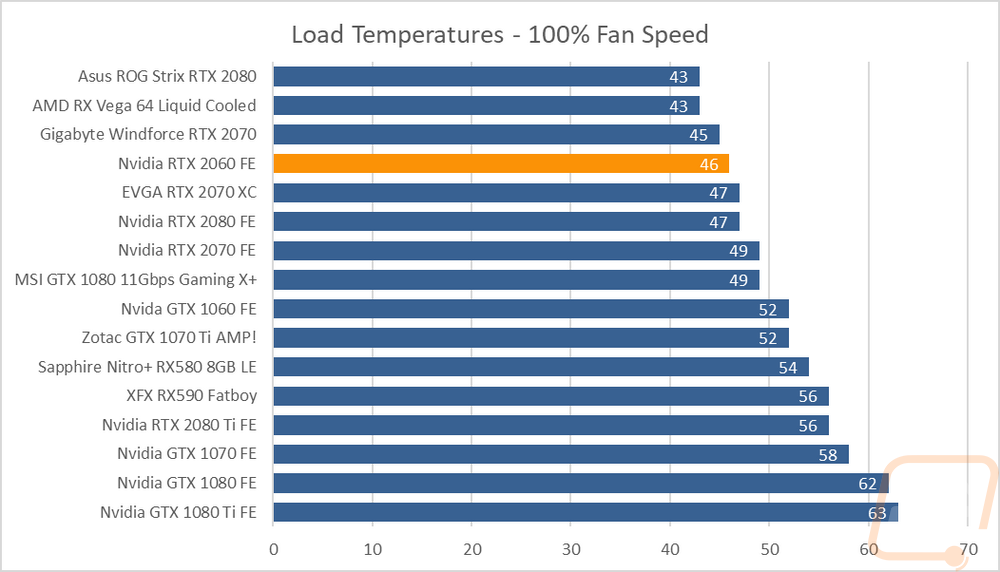 While doing the stock fan profile temperature testing I also got out our thermal imaging camera to take a look at how the RTX 2060 Founders Edition was looking and to look for any hot spots. On the fan side, you can see that the left side of the fans is doing a little better of a job of cooling down the heatsink behind it. This makes sense though because on the right side of the left fan it has the GPU under it. The right fan on the other hand actually is above the gap where there isn’t a PCB, I wonder if an opening in the backplate here might help with cooling in that area. Up on the top edge, you can see where a lot of the hot air is venting, especially over on the GPU side of the card. Then around on the back, the temperatures were relatively consistent with it just getting a little warmer behind the GPU but you can see that even that heat is spread out across a larger area on the thick metal backplate. The only oddity here was over by the PCI bracket where there was a warm rectangle. I thought maybe this was an infrared issue where it was more reflective (it has to be set up to the surface finish) but actually, I think it is because that section is cut into the backplate and is thinner. 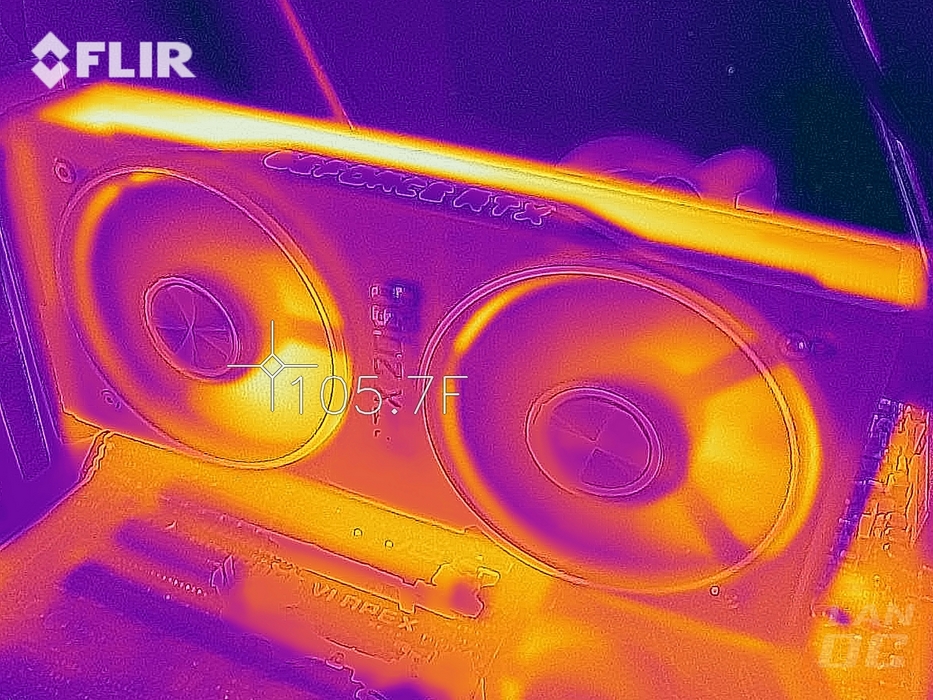 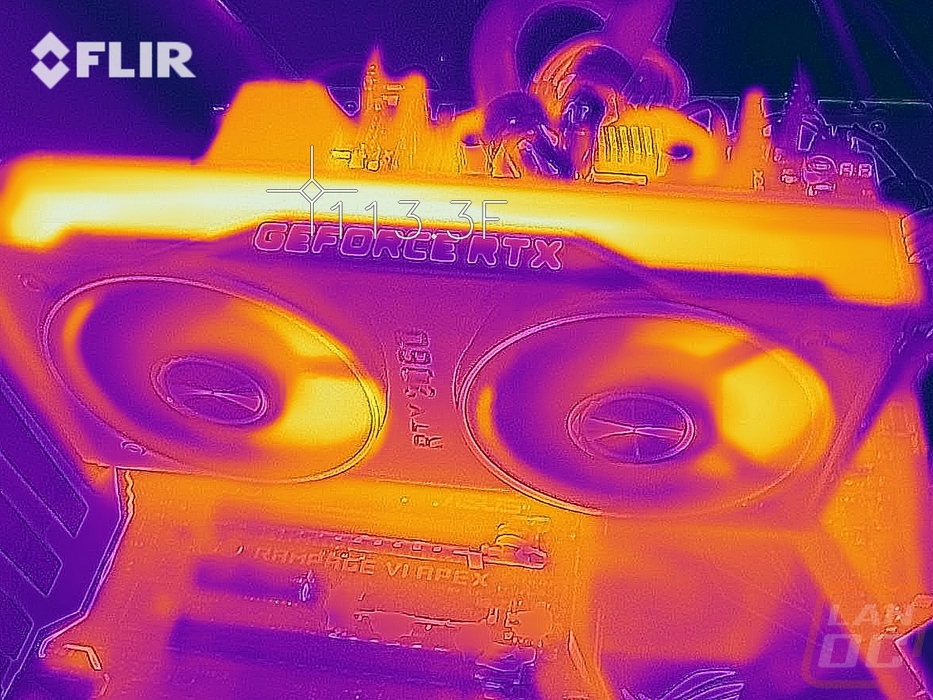 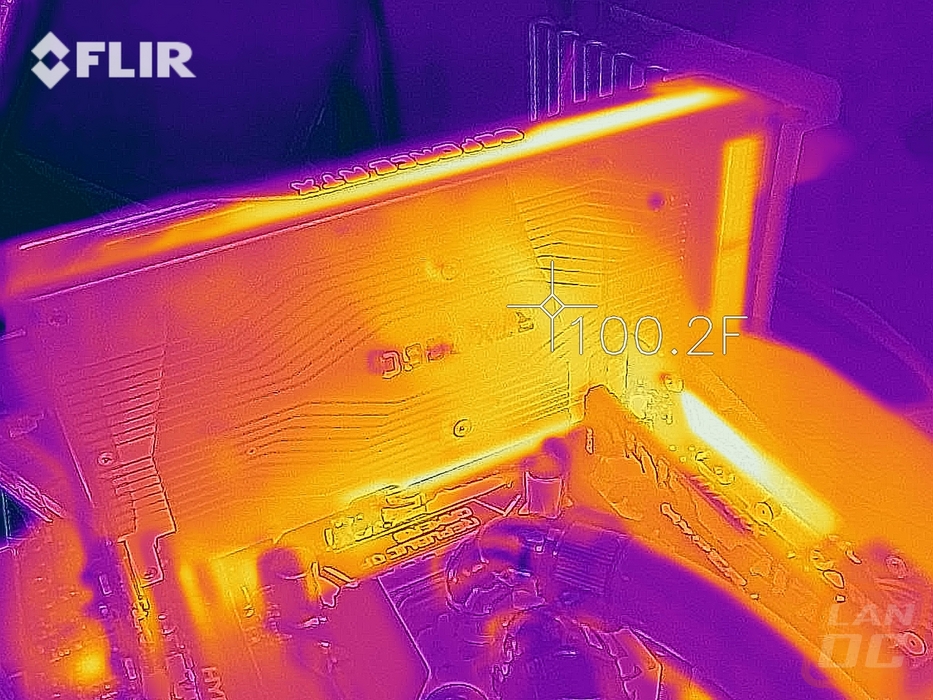 We have 1281 guests and one member online