Well like I said at the start of this review, I am WAY late to the RTX 2060 review so a lot of this might not be a huge surprise to you guys. But I am excited to finally run the RTX 2060 Founders Edition through our tests to confirm what others have been saying. The RTX 2060 is actually a nice little step up. I have to mention it again as I have in all of our RTX FE reviews. But it looks like Nvidia has actually adjusted their product lineup a little with the RTX launch. In the past xx60 cards compare to new xx60 cards and all the way up through the product stack. But The RTX 2060 is better compared to the GTX 1070 price wise. With that in mind, it makes sense that the RTX 2060 is now competing and in a lot of situations beating the GTX 1070 Ti. It is worlds better than the GTX 1060 as well of course. All of that actually makes this an amazing 1080p card but 1440p performance wasn’t that bad as well. What I ran into was most situations if it played well at the highest detail at 1080p, 1440p also performed well. The real limitation is with the 6GB of VRAM and to a lesser extent the 192-bit memory interface. I ran into a few games that used more VRAM than that, even at 1080p with their detail turned all the way up. Performance was great as long as I avoided that situation and most games are good about warning when that comes up.

The Founders Edition shares the exact same cooler as the RTX 2070 FE which I liked. That means you get the same thick metal construction on the fan shroud and the backplate. One thing Nvidia makes sure of is that you feel like you are getting a quality part when you get their cards in your hands. The cooler performance wasn’t as good as you can expect from aftermarket cards, but it was better than the old Founders Edition cards by a good margin and because this shares the same cooler as the RTX 2070 the RTX 2060 FE actually has a lot of headroom left in it. Really my only complaint with the Founders Edition design is with them still not including RGB support with the logo up on the top edge of the card. I’m not asking to have 50 lights all over the place, but I really would like to be able to pick another color that matches my build. Even if I had to agree that I will never be as cool as Jenson is in his leather jackets to turn on the option.

Like with the other RTX cards, the RTX 2060 is still limited by the number of games available that support DLSS and RTX which really are two huge areas where the card has untapped performance available. Right now we are left to mostly compare the cards to standard games, but as the Final Fantasy XV testing I did showed, DLSS can increase performance significantly and Ray Tracing is awesome in its own right. But right now it is mostly just Battlefield V and a few demos that support it. Anthem is coming with support for both. Even better though is Nvidia gives you the option to pick from the two with a free game. I love seeing new top-level games being included for free and in this situation, it means anyone who picks up an RTX card will at least have one game right away that they can use the new features on.

The included game helps with the price, though AMD has an even bigger game bundle going on right now. But even without the free game. The RTX 2060 Founders Edition is available for $349. This is lined up with the lowest priced aftermarket cards, and they don’t have a stock vs founders edition clock speed as they did on the other RTX cards. The GTX 1070 Ti which best competes with this card isn’t available in this range. The cheapest one I can find on Newegg right now is $489. The GTX 1070 can be found for about $300, but it didn’t perform as well. So unlike all of the other RTX cards, the RTX 2060 ends up being a halfway decent value and it’s a good direction to go if you are building a medium budget build. 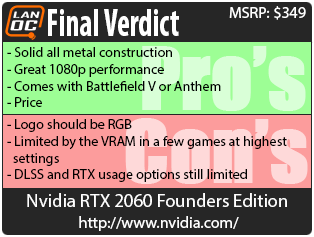 You might call him obsessed or just a hardcore geek. Wes's obsession with gaming hardware and gadgets isn't anything new, he could be found taking things apart even as a child. When not poking around in PC's he can be found playing League of Legends, Awesomenauts, or Civilization 5 or watching a wide variety of TV shows and Movies. A car guy at heart, the same things that draw him into tweaking cars apply when building good looking fast computers. If you are interested in writing for Wes here at LanOC you can reach out to him directly using our contact form.
Discuss this article
Log in to comment
Posts in discussion: Nvidia RTX 2060 Founders Edition

We have 1434 guests and one member online