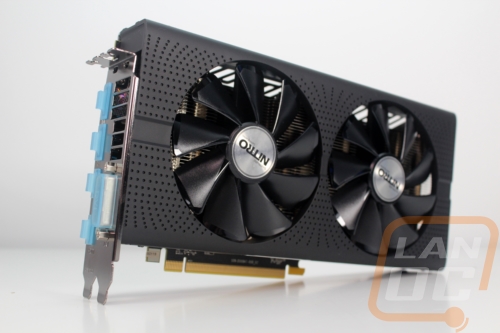 Well, when I first took a look at the reference RX 480 I saw newer DX12 titles really standing out and the card performing really well but coming in behind the GTX 1060 in the older DX11 titles. With the Sapphire RX 480 Nitro, this is still the case, but the Nitro improves on the reference cards performance considerably in all of the tests. Sapphire cranked up the power and improved the cooling to keep the card from throttling and even gave it an overclock on top of that. So the performance numbers look great and with games adding Vulkan support you can expect huge gains, similar to the huge improvements that Vulkan gave the RX 480 Nitro in DOOM in our tests. The cooler design on the Nitro looks great and is a very clean and simple design. You get a small RGB Sapphire logo but it isn’t too flashy or in your face. Like the 470 Nitro, Sapphire included removable fans on the 480 Nitro on the off chance you have issues and need to replace one. Speaking of the fans, I was surprised at how quiet the card ran.

I would have preferred the heatsink be a little larger in the huge fan shroud, there were some areas that the fans were cooling nothing. That said, the Nitro did out cool the reference cooler and when I turned the fans up it showed that it did have the cooling capabilities if you want to lose a little of the noise benefits. Like the 470 Nitro, it also had a high power draw in our wattage tests. This translated to solid clock speeds in-game so I don’t mind them too much, but if you are running a low wattage power supply, please keep it in mind.

So with all of that in mind, where does the Sapphire RX 480 Nitro land? Well if you are on the market for an RX 480 the Nitro is a much better option than the reference card. Not only will you see better performance, but it also ran cooler and quieter. It does cost a little more but the performance makes up the difference. If you are debating between the RX 480 Nitro and a GTX 1060 the decision is a little harder. The 480 Nitro has almost the same 3DMark score as an overclocked GTX 1060. In game most of the DX11 games favor the GTX 1060 and the newer DX12 games favor the RX 480 Nitro. So basically it depends entirely on what you plan on playing the most in the next few years. 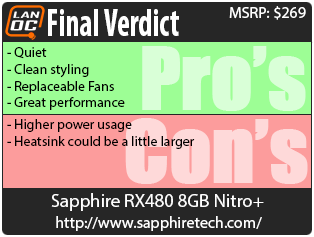 You might call him obsessed or just a hardcore geek. Wes's obsession with gaming hardware and gadgets isn't anything new, he could be found taking things apart even as a child. When not poking around in PC's he can be found playing League of Legends, Awesomenauts, or Civilization 5 or watching a wide variety of TV shows and Movies. A car guy at heart, the same things that draw him into tweaking cars apply when building good looking fast computers. If you are interested in writing for Wes here at LanOC you can reach out to him directly using our contact form.
Discuss this article
Log in to comment
Posts in discussion: Sapphire RX480 8GB Nitro+

We have 1213 guests and no members online