Three weeks ago Nvidia launched their RTX 2060 SUPER and RTX 2070 SUPER and I had the chance to check out both on those in their Founders Edition versions. At the same time, they also announced the RTX 2080 SUPER as well but performance details weren’t released. So while we have been checking out the Founders Edition cards, the new AMD cards, and later the new aftermarket SUPER cards I’ve been waiting to check out the RTX 2080 SUPER. Well, today's the day. I’ve had a little while to put the RTX 2080 SUPER Founders Edition through our test suite and now we can check out what is different with the card and how it performs compared to the old RTX 2080 as well as the 2080 Ti, Radeon VII, and Vega 64. The other SUPER cards had significant performance jumps, will the 2080 SUPER do the same? Let's check it out.

So before diving in I did want to run through the specifications to see what has changed for the RTX 2080 SUPER. For comparison, I included the RTX 2070 SUPER, RTX 2080, and the RTX 2080 Ti. The RTX 2080 and RTX 2080 Ti are the two I’m most interested in comparing the 2080 SUPER with to see what has changed and how it compares with the gaming flagship card. So the first thing I wanted to check was which GPU the 2080 SUPER went with. Nvidia stuck with the TU104 that the RTX 2080 had so right away we know this isn’t jumping up into the range of the RTX 2080 Ti. That’s okay though, there is a big gap between the RTX 2080 and the RTX 2080 Ti. So what Nvidia did change was the SM count by adding two. This bumped the CUDA core count up from 2944 to 3072 and increased things like the RT Core Count and Tensor core count as well. The other big change was in clock speeds. Base/Core clock went from 1515 MHz on the 2080 to 1650 MHz on the 2080 SUPER. Then for boost clock, they went from 1710 MHz to 1815 MHz. That isn’t a huge jump, in fact, the clock speed of the RTX 2080 SUPER is still lower than you can find aftermarket RTX 2080’s clocked at. The combination of the two changes does translate to the INT32 and FP32 performance increasing from 10 TFLOPS each to 11.2 TFLOPS each. Nvidia didn’t push it in their comparison specifications but I also noticed that the memory clock speeds increased on the 2080 SUPER. The original RTX 2080 ran at 14 Gbps and the 2080 SUPER’s memory is running at 15.5 Gbps. This accounts for the increased memory bandwidth while the memory capacity is still 8GB and it still has the 256-bit memory interface. 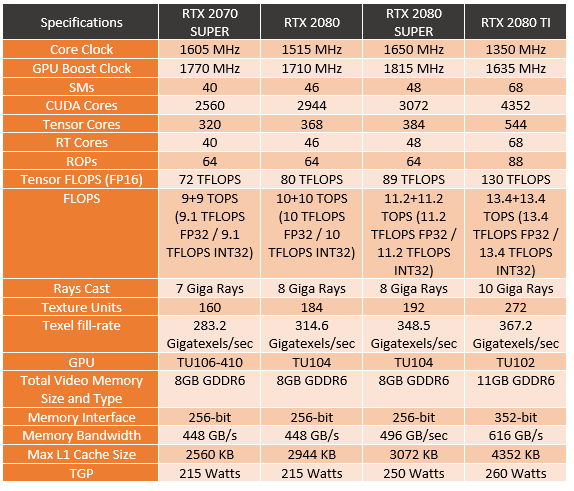 Now just to confirm everything I did fun GPUz before getting into my testing. I’ve included that below. I just wanted to confirm that our card has the same clock speeds as in the specifications, which it did. You can also see the BIOS revision I tested on, the driver which was the pre-launch media driver for this launch, and that our card had Samsung memory should that change later (which it seems to always). 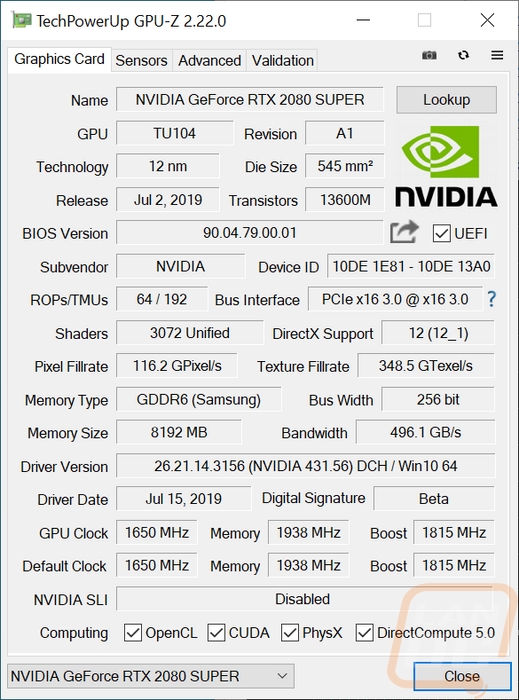