So Nvidia didn’t make any significant changes to the Founders Edition design for the RTX 2080 SUPER and unlike the RTX 2070 SUPER, there isn’t a larger cooler design to go up to than this. This is the same dual fan cooler design that the RTX 2080 and RTX 2080 Ti both use and that I have loved. It has a thick cast metal shroud design which has been a key feature in Nvidia’s Founders Edition and Reference cards for a while now. Only when the RTX cards launched they switched to this dual axial fan design. It has kind of a cassette tap look which the 80’s kid in me loves. The shroud has silver panels on each end of the card that run into the two fans and then in the center everything is chromed. The older RTX 2080 was similar but the center was black, the chrome look is new for all three of the SUPER cards and it also includes the model name in the middle like before but with the letters filled in with black (which were chrome before) and then bright green for the SUPER logo. I don’t normally like chrome that much but as I have said in the other two SUPER launches I actually do dig this look, even though I do miss the black. Both fans have a machined lip around them because they stick out just slightly and I don’t think you can say any other card looks like the Founders Edition design. 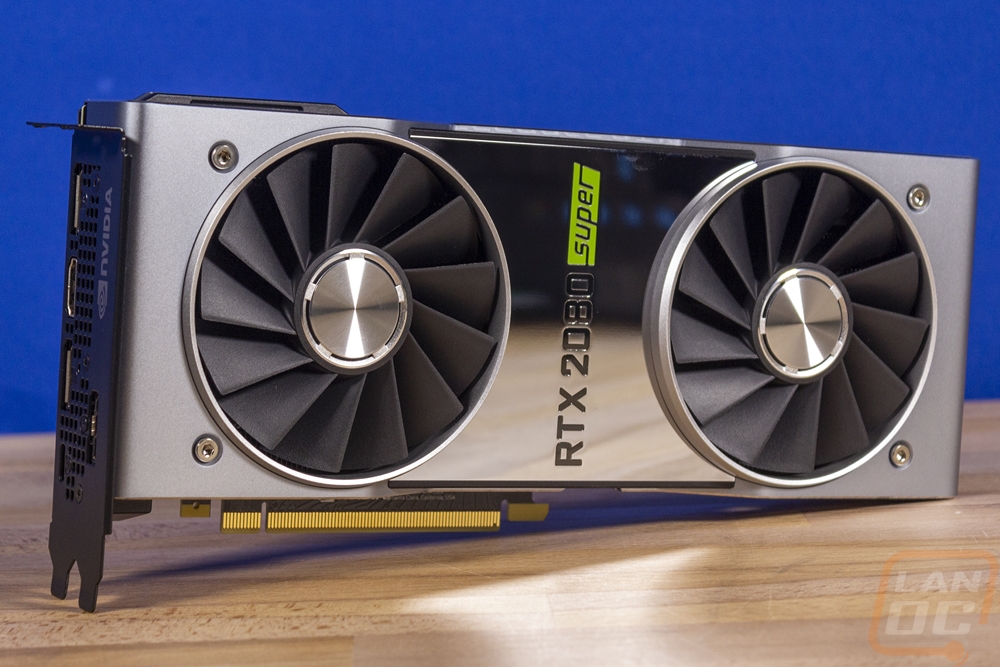 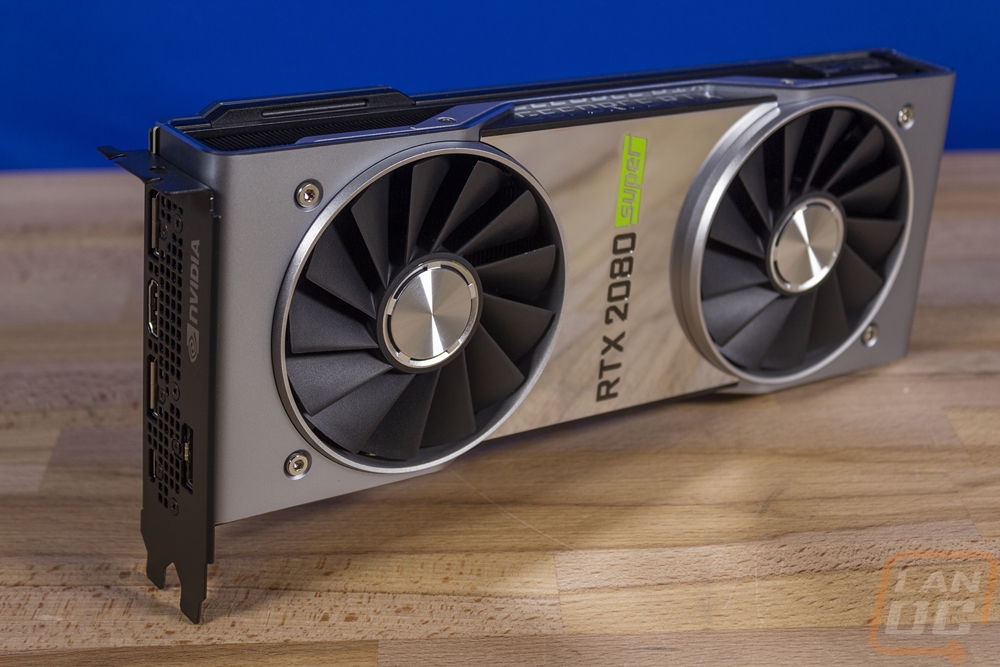 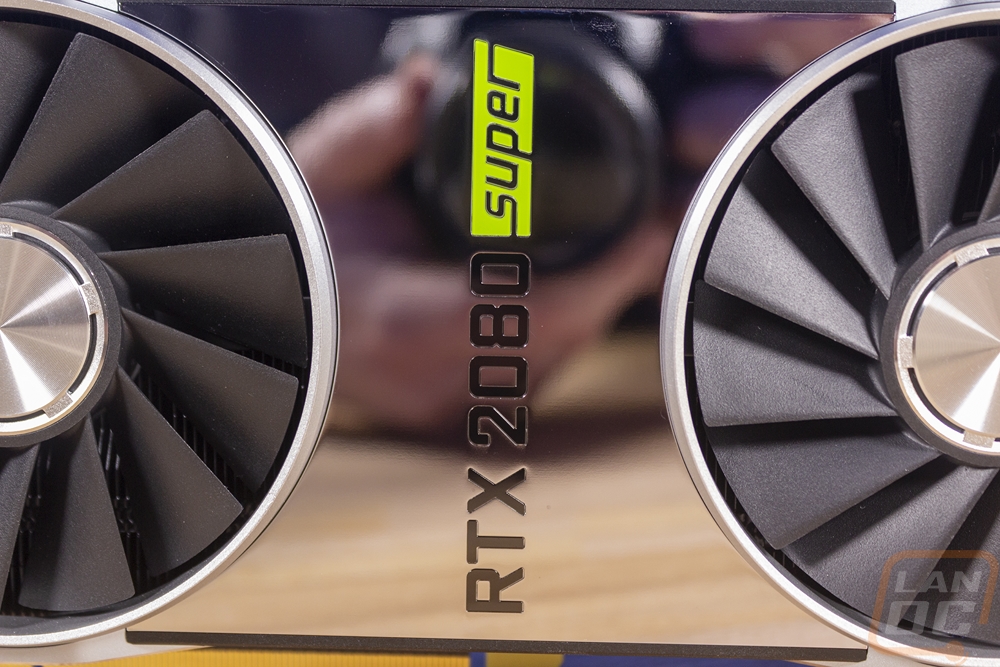 The fans have 13 blades on them with a heavy angle on them, between the angle and density you can’t see between the blades at all. In the center, they have a glued on cap which is machined. That cap is one of the carryovers from the older blower designs but it still looks good with this design. 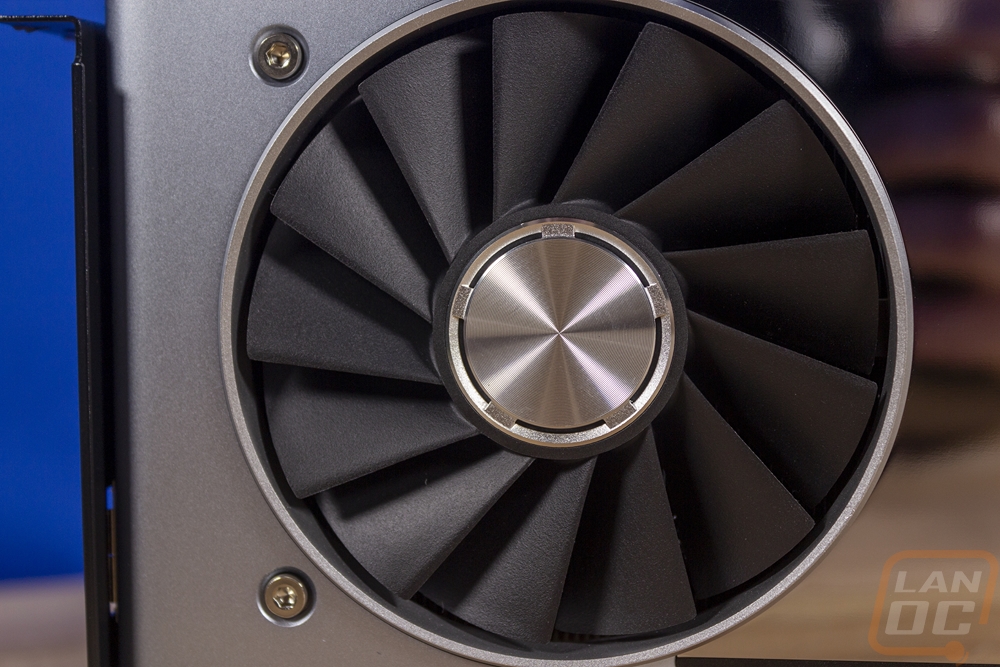 Up on the top edge, the chrome finish from the front doesn’t carry on. The center section has the same black finish that the older RTX cards had and it has the GeForce RTX logo as well. The logo looks chrome but it is actually clear plastic with lighting behind it. Nvidia only allows this to light up in their signature green color and I’ve said it more times than I can count, but this really should be RGB to allow people to match the card to their build. I complain a lot about backlit branding but I don’t mind the GeForce RTX branding, I just wouldn’t want to see the Nvidia logo here so no complaints here on that this time around. Also up on the edge, the RTX 2080 SUPER still has the NVLINK connection like the RTX 2080 and RTX 2080 Ti had and the RTX 2070 SUPER added. Being the Founders Edition card, Nvidia also makes sure to match the metal casings design with a slide on cover that is metal. In fact, if you didn’t know to look you might even miss it when it's installed. Also up on top are the power connections and with a TDP of 250 Watts, I was surprised that they stuck with the 8-pin and 6-pin combination that the RTX 2080 has when the 2080 Ti had to have two 8-pin’s. 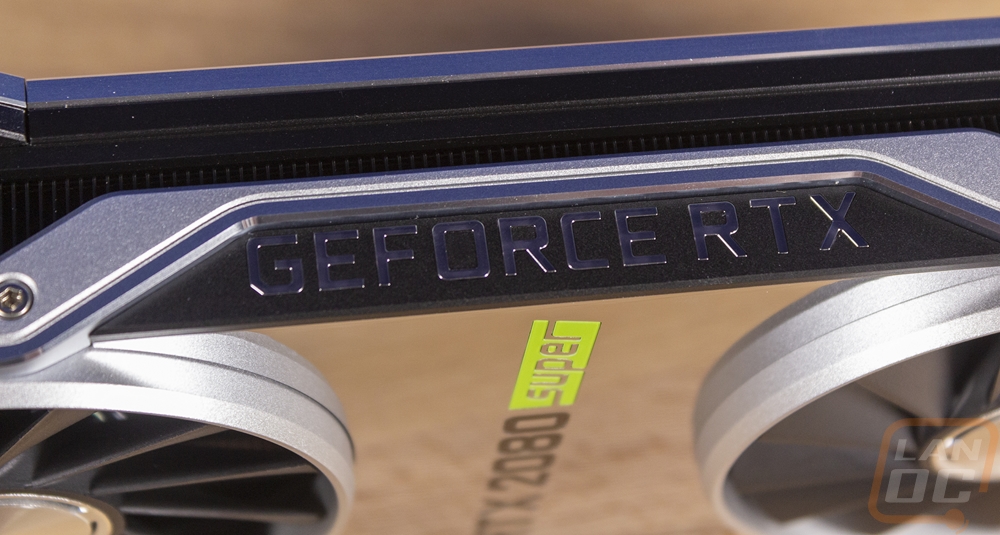 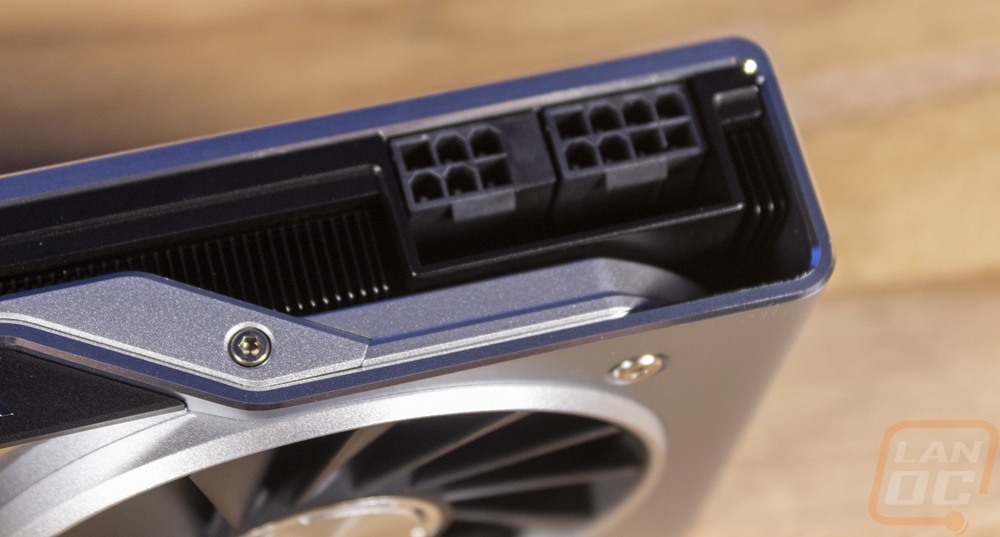 With the Axial fan design, the Founders Edition cooler is designed for the air to blow down and then through the heatsink and it has a vertical fin configuration. This is complemented with open exposure to some of the fin stack at the top and bottom edges. There is a wide V-shaped accent which blocks some of them but overall you can expect the warmed air to be heading out the top and bottom of the card. To be sure Nvidia also wrapped the metal fan shroud around the end and connected it with the backplate. The end of the card does have the two mounting holes for server and OEM use if you want to keep the card locked in place and prevent any PCIe slot damage or GPU sag. 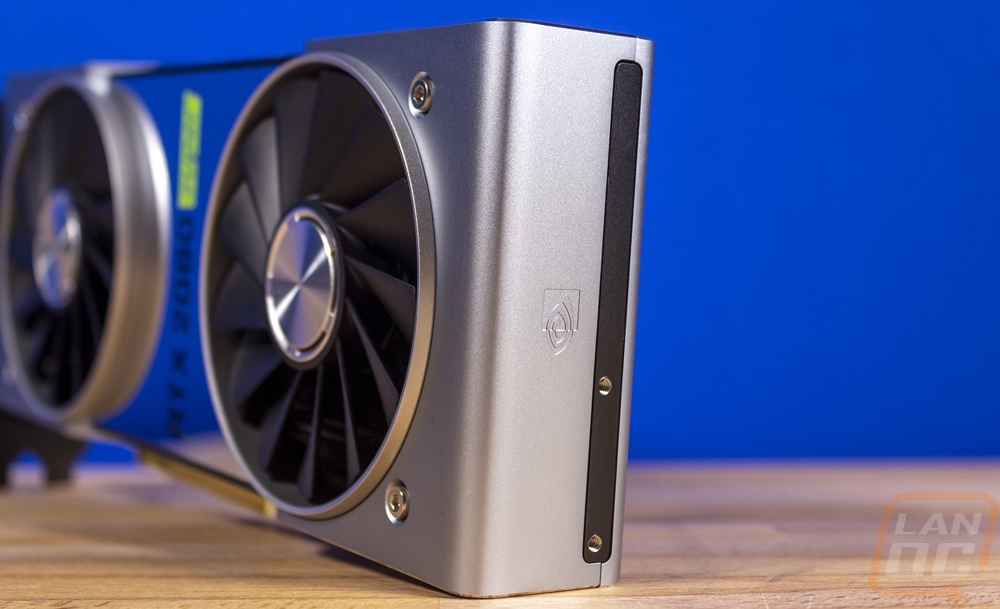 I think the backplate is my favorite part of the Founders Edition cards, especially after taking a look at a few aftermarket designs just recently. Nvidia uses the same thick cast aluminum here which gives the card some weight but most importantly makes this a solid design, there isn’t going to be any sag to the PCB later with this design which should help with long term durability. The backplate is also the second most visible part of the card. Now the all silver design isn’t going to be for everyone and it is even more in your face on the backplate without the chrome and fans to split things up. But the backplate does have a line design molded into it that runs the length of the card, moving up and down to make room for the logo in the center. The RTX 2080 SUPER logo is filled in with chrome except for the SUPER logo which again has that bright green. The back also has two stickers with the serial number and barcode as well as a sticker with all of the required logos and certifications documented all together.

For the rear I? on the PCI bracket the RTX 2080 SUPER is is sporting the same configuration as the RTX 2080 and RTX 2080 Ti. You get one HDMI port and then three DisplayPorts. Nvidia also included the DisplayPort to DVI adapter for those still using DVI. Then in the bottom right corner, there is a small Type-C connection which can work as a USB port but is there for VirtualLink which is an alternative to USB-C. It is designed to feed power, display, and data over the one connection to your VR headset rather than having to hook all three of those up to a box to adapt to your headset. My favorite thing back here though is the all-black bracket. It’s a small touch, but it looks amazing when installed in a case with a black motherboard I/O shield as well and the Nvidia logo works well here.

So here is a look at the RTX 2080 and the RTX 2080 SUPER next to each other and like I said there wasn’t much changed. The chrome in between the fans and the SUPER added to the logo are the only two things changed in the design and I’m glad. This is a great looking card. Short of RGB for the logo nothing needs to be touched for it to look good. Though come to think of it a design that used black where the silver is would look good! 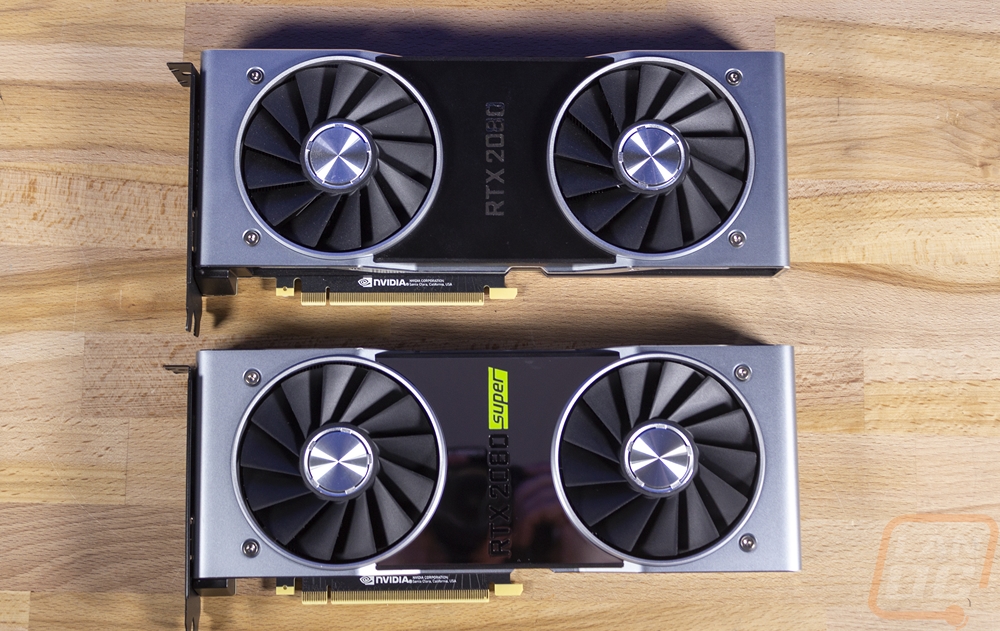 When testing I also grabbed a picture of the backlit logo in action. The Nvidia green looks good no doubt. But it would look good in a few other colors as well! 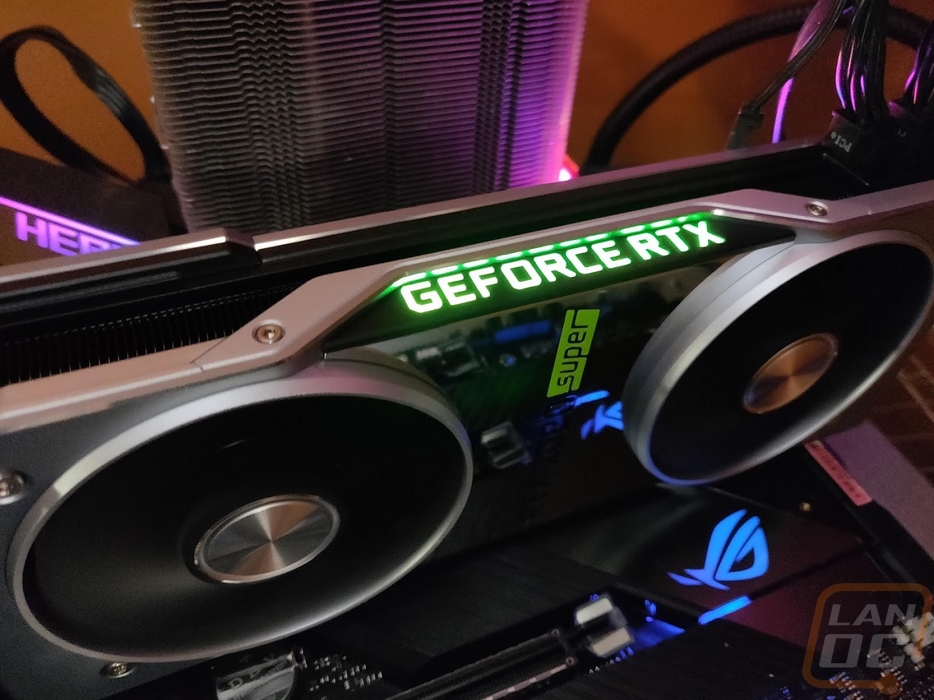 We have 1635 guests and no members online