With all of the testing done and having taken a look at the specifications and the Founders Edition design, I can finally sort through all of my thoughts. Now right off the bat, I’m going to say that I was really hoping to see the RTX 2080 SUPER did what the other SUPER cards did, but it didn’t. What I mean by that is the other SUPER cards caught up with the card slotted above it and it was clear even just from looking at the specifications of the RTX 2080 SUPER that Nvidia wasn’t doing that with this card. This isn’t the RTX 2080 Ti killer, it is just a refresh of the RTX 2080 to help compensate for the RTX 2070 SUPER jumping up closer to the RTX 2080. Now a bigger jump would have been nice but what we ended up with is still not a bad increase. In some tests, it helped bridge the gap between the RTX 2080 and the RTX 2080 Ti by about ¼ to 1/3. Frankly, there was such a big gap behind the 2080 Ti that it makes the 2080 SUPER look worse than it is. When I got into in game performance I was really impressed with the performance, this card is going to play anything you throw at it at any resolution. The 1080p and 1440p performance is setup for the high refresh rates and at 4k everything is going to be playable with a majority smooth at over 60 FPS.

As for the Founders Edition design itself, Nvidia didn’t really change much here at all. The addition of chrome in the middle section just like the other SUPER cards and the bright green SUPER logo are the only two visual updates. I would have liked to see the top logo lighting finally get the RGB upgrade, but it didn’t. Beyond that I still love this cooler design, it is one of the best looking card designs on the market and the thick cast shroud and backplate really set it apart when it comes to overall feel and construction. This is the only card design that I know I won’t have to worry about GPU sag later in life. The silver design is still going to be very polarizing and adding chrome to that is going to only increase that. I like it, but I think a black design might still be better. I also can’t forget that black PCI bracket that I love so much.

As for pricing, this refresh is actually slotted at the same price as the original RTX 2080 Founders Edition. $699 still isn’t cheap, but more performance for the same amount will never be turned down. Nvidia has also been spicing up their RTX cards with the addition of a game bundle as well. You get Wolfenstein: Youngblood and Control which are both upcoming top tier games that support ray tracing. This helps make sure everyone has at least some ray tracing supported games while we wait for more games to come out and I love that you get free games that aren’t even out yet, not an old game that most people who wanted it have already played. That $80 value helps take a little edge off the $699 price point. Obviously, unless you are running a high refresh rate monitor or gaming at 4k this is more card than you might need. But for those who do need it, this is a much better value than stepping up to the RTX 2080 Ti! It will be interesting to see how the 2080 SUPER aftermarket cards perform, but I wouldn’t discount the Founders Edition either. This is a solid card. 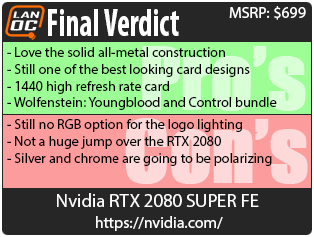 You might call him obsessed or just a hardcore geek. Wes's obsession with gaming hardware and gadgets isn't anything new, he could be found taking things apart even as a child. When not poking around in PC's he can be found playing League of Legends, Awesomenauts, or Civilization 5 or watching a wide variety of TV shows and Movies. A car guy at heart, the same things that draw him into tweaking cars apply when building good looking fast computers. If you are interested in writing for Wes here at LanOC you can reach out to him directly using our contact form.
Discuss this article
Log in to comment
Posts in discussion: Nvidia RTX 2080 SUPER Founders Edition

We have 1317 guests and no members online