Well, the testing is done, we have gone over what the hell a GTX 1660 Ti is, and I took a look at the MSI GTX 1660 Ti Ventus XS.. All that is left to do is run through a few of the key points and see where this fits in the market both in pricing and performance. As far as the GTX 1660 Ti goes I may not understand at all the reason for the 1660 over a 2000 series number or 1160. But I was impressed with Nvidia’s new cards performance. It sits solidly as a 1080p card that is going to handle any games you throw at it at their highest settings at 1080p. More importantly, it stomped the original GTX 1060 and along with that the RX580/590 as well. I really wish I had a Vega 56 to compare it with. But I was impressed with it outperforming the GTX 1070 FE in a lot of our testing. The MSI Ventus XS that I tested also impressed in a few areas. I really like the look of this card with the mix of black and the lighter silver for trim and not adding any RGB lighting on this card was a good choice. I don’t mind lighting, but I don’t think every card needs to have it as well.

Now I did have a few complains they were all focused on MSI's card though not the GTX 1660 Ti. Specifically, I have the heatsink listed as a complaint. Normally I would just say bad cooling performance but MSI did size out this cooler right and the card runs at perfectly adequately but only that. They went with a cast heatsink design over a sheet metal design with more surface area and on top of that, the cooler was much smaller than the fans and fan shroud. I will get a chance to compare the cooler to other cards later so it will be interesting how it compares. The inclusion of a plastic backplate was also a little controversial. On one hand, it looks great actually. But thermally backplates don’t really help things even when they are metal. But using plastic which is more of an insulator is concerning. 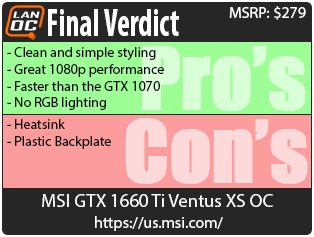 You might call him obsessed or just a hardcore geek. Wes's obsession with gaming hardware and gadgets isn't anything new, he could be found taking things apart even as a child. When not poking around in PC's he can be found playing League of Legends, Awesomenauts, or Civilization 5 or watching a wide variety of TV shows and Movies. A car guy at heart, the same things that draw him into tweaking cars apply when building good looking fast computers. If you are interested in writing for Wes here at LanOC you can reach out to him directly using our contact form.
Discuss this article
Log in to comment
Posts in discussion: MSI GTX 1660 Ti Ventus XS