With that completely blacked out box I would have almost expected the same from the card but actually the MSI GTX 1660 Ti Ventus XS is a nice mix of black and a lighter silver. A lot of companies have been going with black and a dark grey which is nice, but this silver used as a trim, not for the whole card like Nvidia’s Founders Edition cards is a nice touch actually. Like the RTX 2060 from MSI that I recently reviewed, the Ventus XS has a dual fan design with two very large fans in an axial configuration meaning they blow down into the heatsink. They both have MSI logos on them and an interesting green ring on the center cap as well. The fans themselves have a high number of fan blades (15 to be exact) and there aren’t any weird tabs on them but they do have a glossy section on every other fan in the same way our last MSI card had a tab on every other blade. The silver accent around the fans reminds me a lot of Nvidia’s older 1000 series Founders Edition cards with their angular look. I should also point out that the cards proportions are off compared to most other cards. It is exactly 8 inches long which is short, but sadly not short enough to be considered an ITX card because those are normally about an inch shorter and match or are at least very close to the length of an ITX motherboard. But then also because of the large fans, this card is tall, you can see that it is just a little under an inch taller than the top of the PCI bracket which normal height is just a touch over that. So the Ventus XS is tall and skinny (mostly), exactly the opposite of my personal frame. 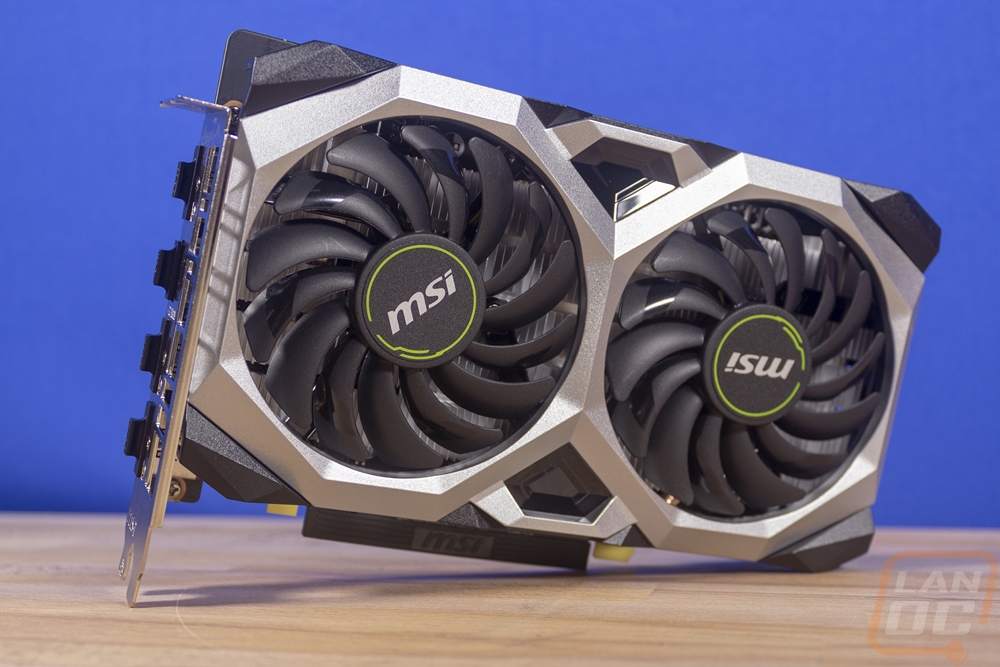 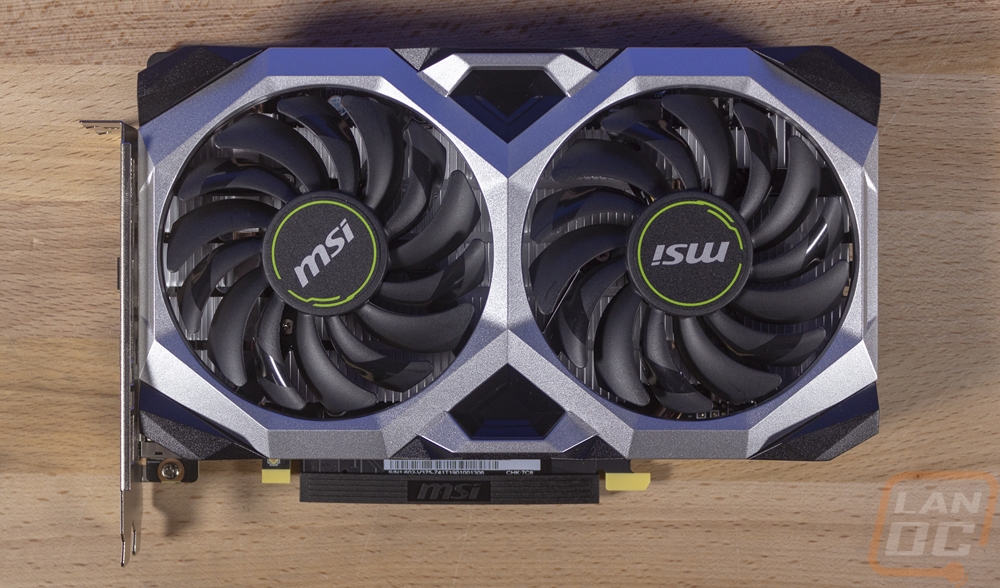 Taking a look at the three thin edges of the card, mostly the top and bottom you can start to get a better idea of the cooling configuration as well. Now, this is my first experience with the GTX 1660 Ti and it might be a cool running card. But I’m not particularly a big fan of the cast machined aluminum heatsinks like this. I prefer a nice standard heatsink with layers of sheet metal for more exposed surface area and this doesn’t really have that. I will find out later how the performance is, but I can tell you for sure that it could be better. Anyhow MSI did use a heatpipe that runs right over the GPU, and snakes up and down to spread the heat out across the heatsink. The two fans then blow down over the heatsink and the hot air is directed up and down with the fin orientation so the warm air will go out those two directions. I wouldn’t put an M.2 under a card with that configuration. The end of the card has surprisingly nothing to offer with that shroud going over it, but I will talk more about that in a minute.

One of the most interesting aspects of the GTX 1660 Ti Ventus XS is this backplate design. I say interesting, but I think for some it will be a pro and others a big con. MSI did something I haven’t seen before and went with a plastic shroud. This is obviously cheaper than a nice heavy duty metal cover, but like with PC cases where the only way to get interesting styling is to use some plastic, they were able to wrap around the end all in one piece cheaply. It could be done with a thick machined piece, Nvidia even did it with their thick casted shroud on the RTX Founders Edition cards. But both options are expensive. The backplate also has the MSI logo and a few stylized lines printed on it as well as a brushed finish cut into it that has a nice feel to it. The plastic is thick, much like the metal Founders Edition designs and the end has vents in it. Now the reason I think this is controversial is because it actually looks really good. But for cooling, plastic is an insulator. Backplates already sometimes contribute to worse cooling, I am considered what plastic will do. So love it or hate it, but I bet you have an opinion on MSIs decision here. 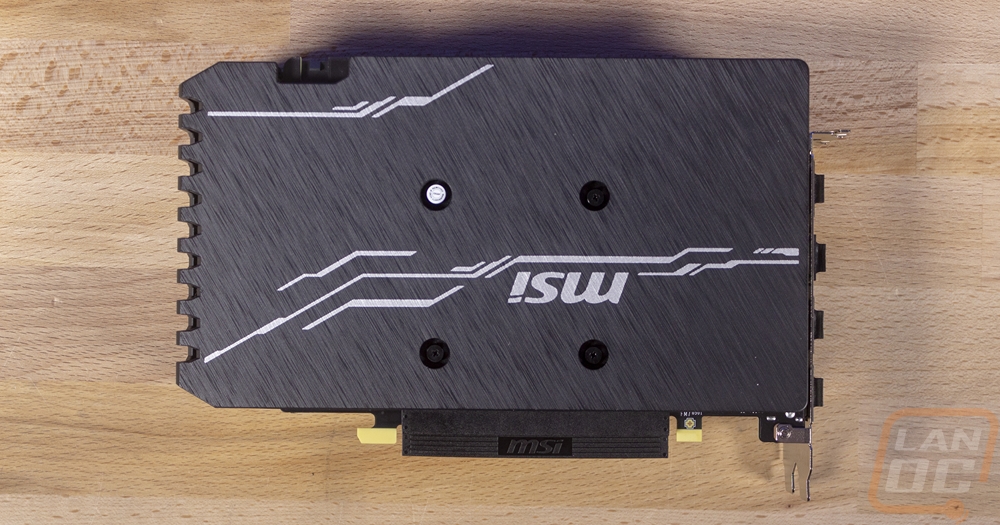 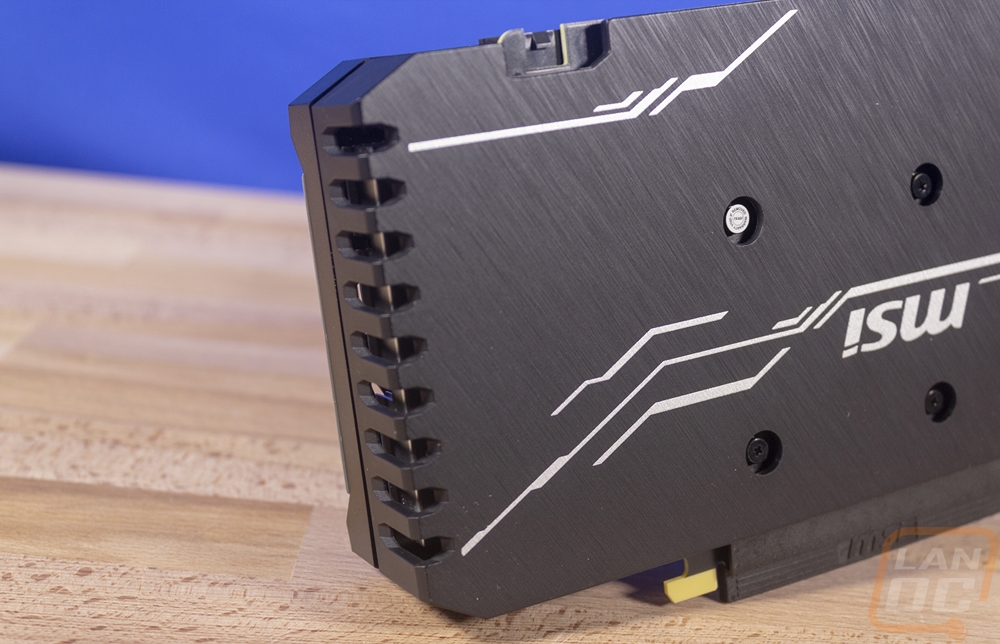 Well the Ventus XS has exactly zero RGB lights which a lot of people will be happy about. That means on the top edge there wasn’t a backlit logo to talk and complain about. MSI went with a much simpler silver painted MSI logo and the GeForce GTX branding which I don’t mind. Also on the top edge was the power connection. I figured with the GTX 1660 Ti’s 120-watt TDP that MSI might actually use a 6 pin like some of the GTX 1060’s use but they stuck with the 8-pin power connection. It is flipped around with the clip on the PCB side with a notch, this orientation allows more heatsink room, but as you can see the heatsink doesn’t go up into this area at all, it is actually not near the top of bottom of the fan shroud.

The end of the Ventus XS has a surprisingly open airflow PCI bracket, especially for a card that isn’t a blower design. Anyhow MSI stuck basically with the same configuration I saw on our RTX 2060 Gaming Z review. That is three DisplayPort connection and one HDMI in between the triplets. This is great on a high-end card but as I mentioned in the 2060 review, you start to reach a point in the lineup where the chance of someone still needing those legacy connections for older monitors comes around and I think we are at that point. A DVI connection would have been much better than a third DisplayPort in my opinion. I would also love for that bracket to be tinted or even better, all black. A majority of cases today are black and a nice black PCI bracket makes a surprisingly big difference.

We have 1671 guests and one member online