My last round of testing is always focused on none gaming or work focused aspects. This includes power usage, but is mostly focused on the performance of the cooler with both noise and temperature testing. This is also where different brands and models of cards most significantly set themselves apart from other cards with the same GPU model. My first tests were focused on the power usage of the GTX 1660 Ti. Here I tested twice using our Kill-A-Watt the power drawn for our test system. Once I loaded everything up with 3DMark Fire Strike using its combined benchmark to put a game like load on the GPU and the CPU. In this test, the GTX 1660 Ti pulled 297 watts which were a touch below the GTX 1070 that it outperformed in most tests. Interestingly this was over 40 watts higher than the GTX 1060 FE which has the same TDP. In my second test, I loaded up the GPU harder with AIDA64’s stress test. This result is lower because the CPU isn’t also loaded. At 215 watts the gap between the GTX 1060 and GTX 1660 Ti is smaller here. 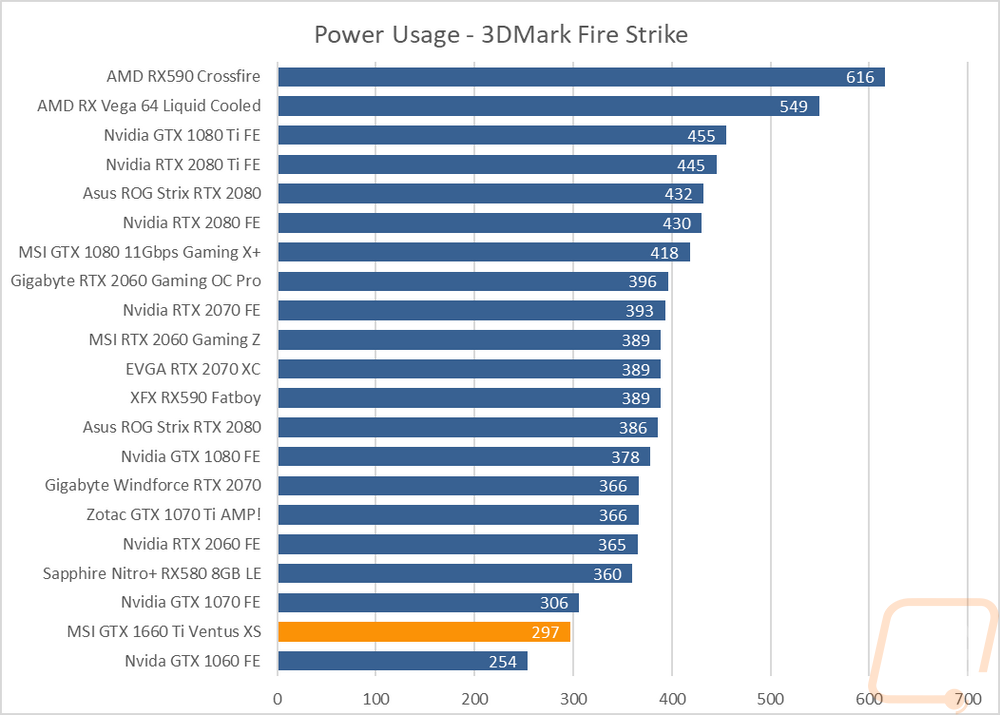 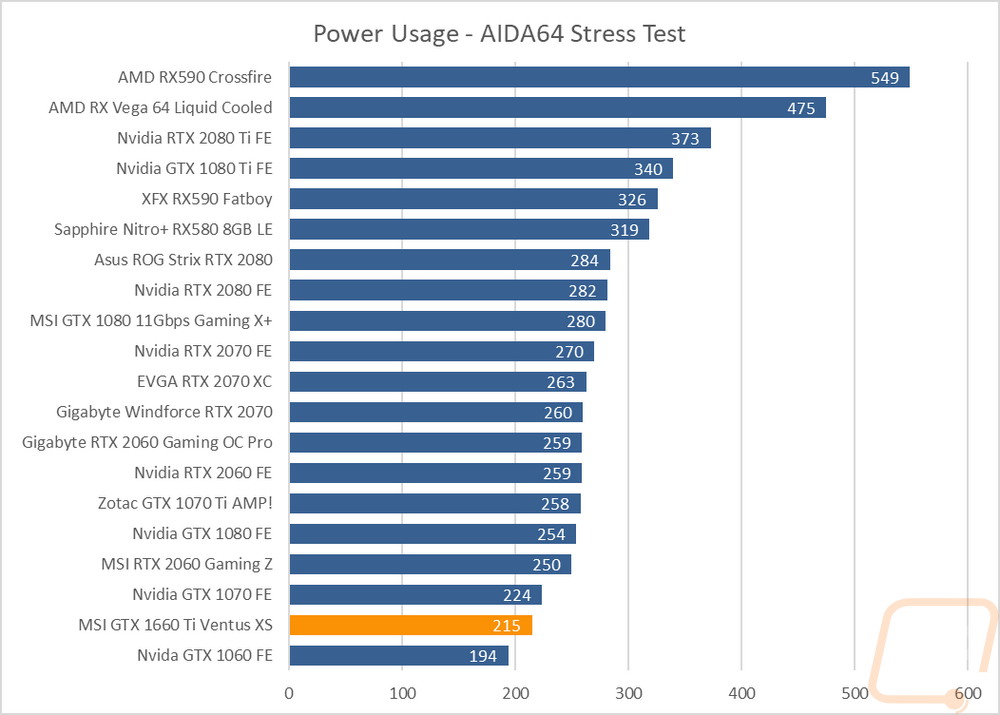 The noise testing is our first real look at the GTX 1660 Ti Ventus XS’s cooler. With the fans cranked up to 100% I tested the noise level to get an idea of how loud the card is capable of being. The two fans didn’t do to bad here actually at 53.8 decibels. 40% fan speed was much better at 35 decibels, in fact, that was the quietest card at 50% fan speed tested. The RPM graph shows partially why the Ventus XS was quiet, MSI doesn’t have the cards two fans running at that high of a speed when cranked up. 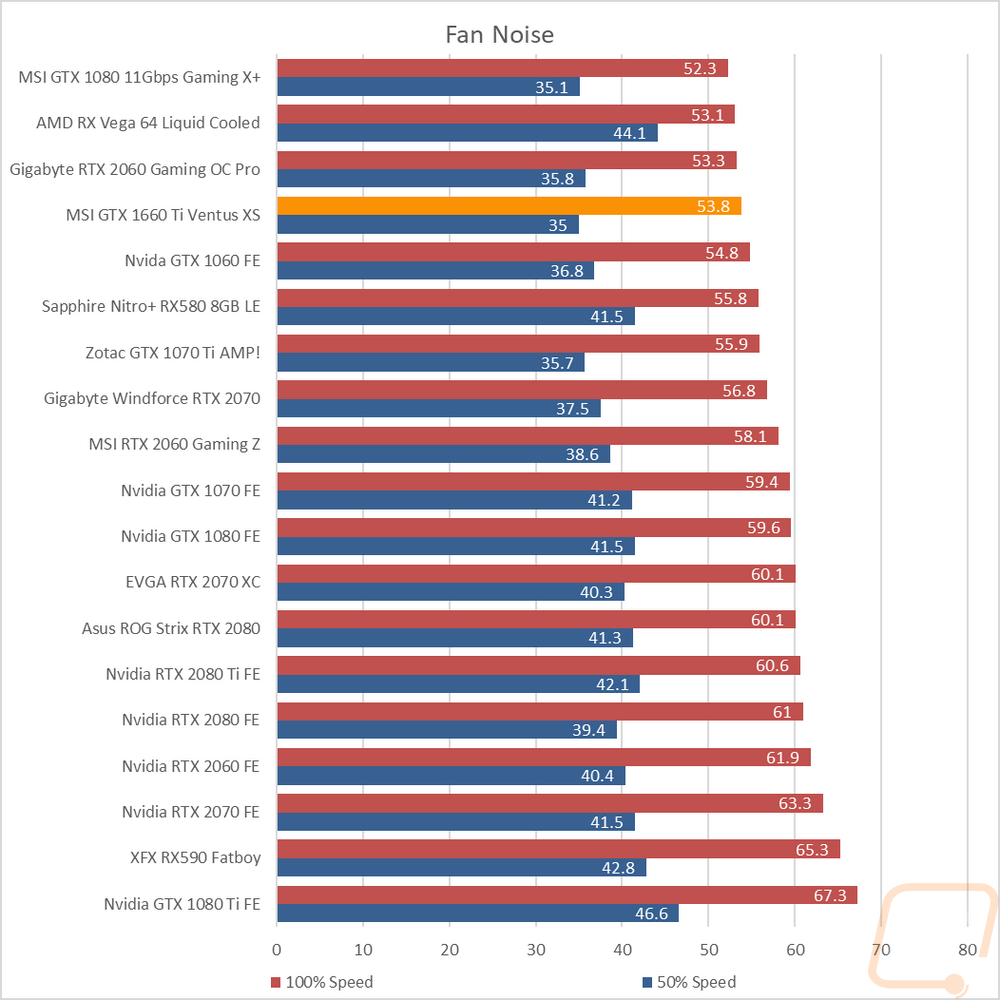 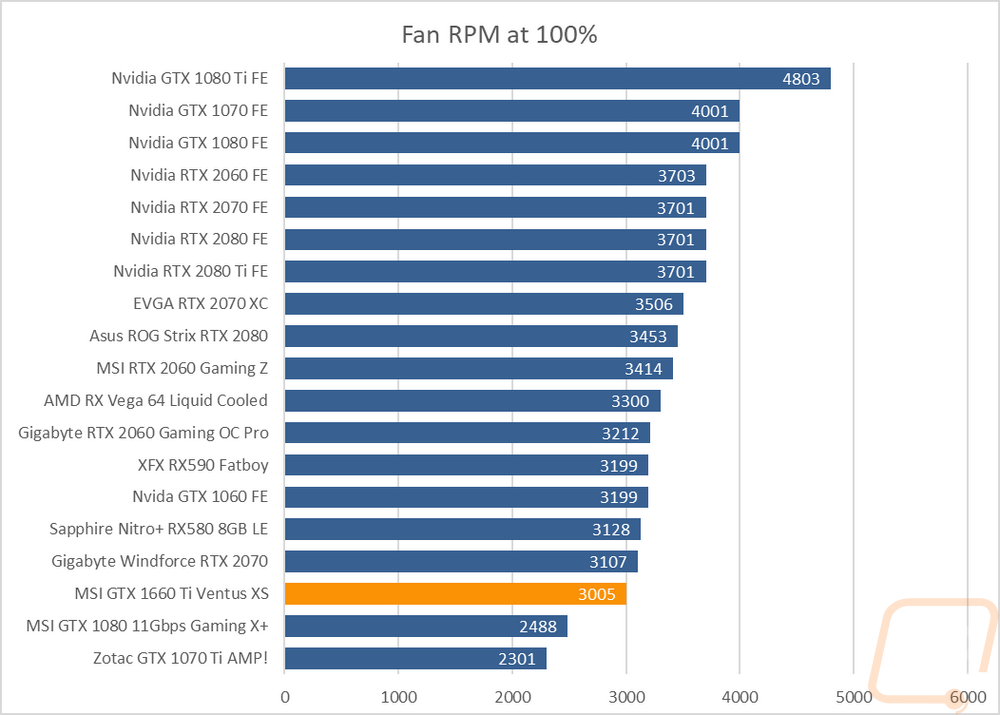 Now cooling performance, I was especially interested in this after bashing on the heatsink design of the Ventus XS. I ran two tests here as well, one with the stock fan profile and then again with the fans at 100%. This lets us know what you can expect out of the box and then when the cooler is capable overall. With the stock fan profile, the Ventus XS ran under load at 59 degrees which isn’t too bad at all. This was in line with the various aftermarket RTX 2060’s I have tested. Cranking the fan speed up however you can see it move into the middle of the chart at 52 degrees. There is still some headroom, but not a large margin. Enough to get the job done and I wouldn’t consider this a hot card at all, but it will be interesting to see how this compares to other GTX 1660 Ti’s later. 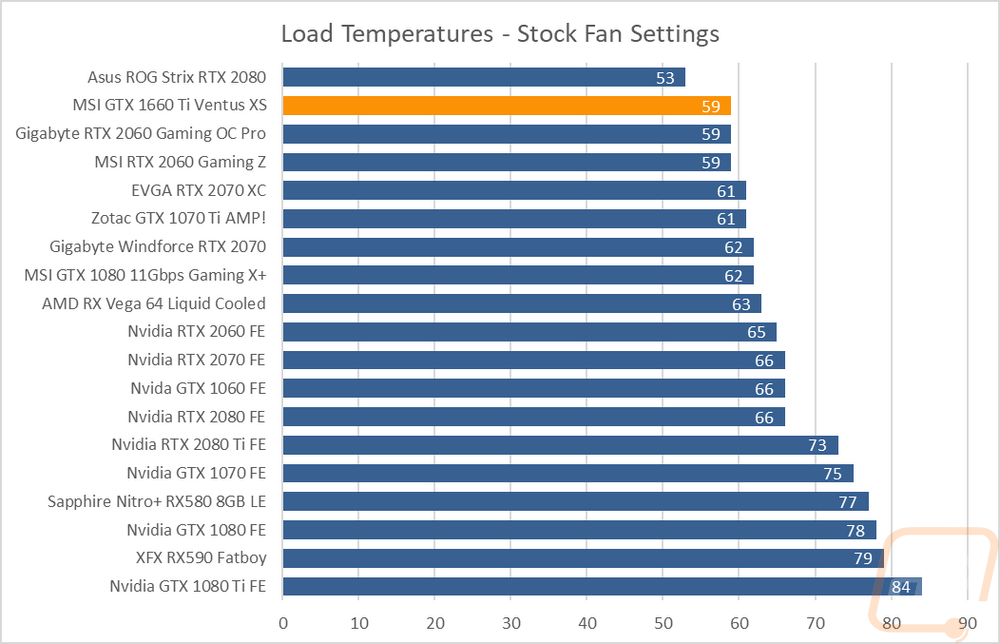 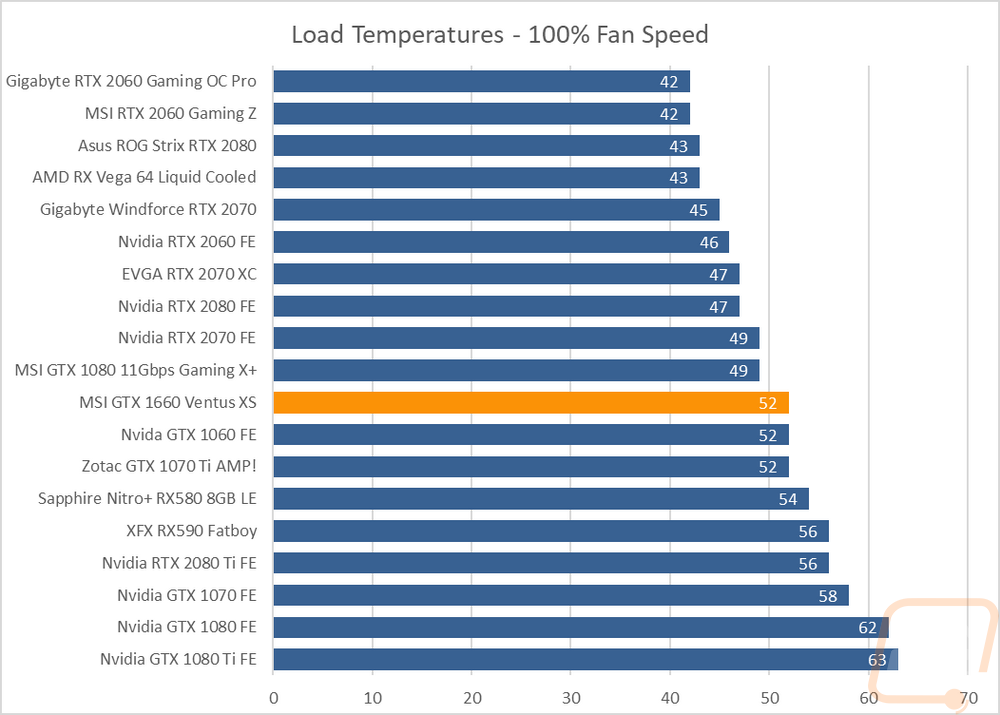 While doing the stock fan setting testing I did also get a few thermal pictures of the Ventus XS. On the fan side, I did notice that where the heatsink ends short of the bottom of the PCB things are especially warm down in that area, sat with near the top where again the heatsink stops short. You can especially see it from the top down view. Now the back picture does a good job of showing what I was concerned about with the plastic backplate. There is some heat coming through but overall you can see how it is insulating and keeping heat in, notice how much warmer it is in the screw holes. 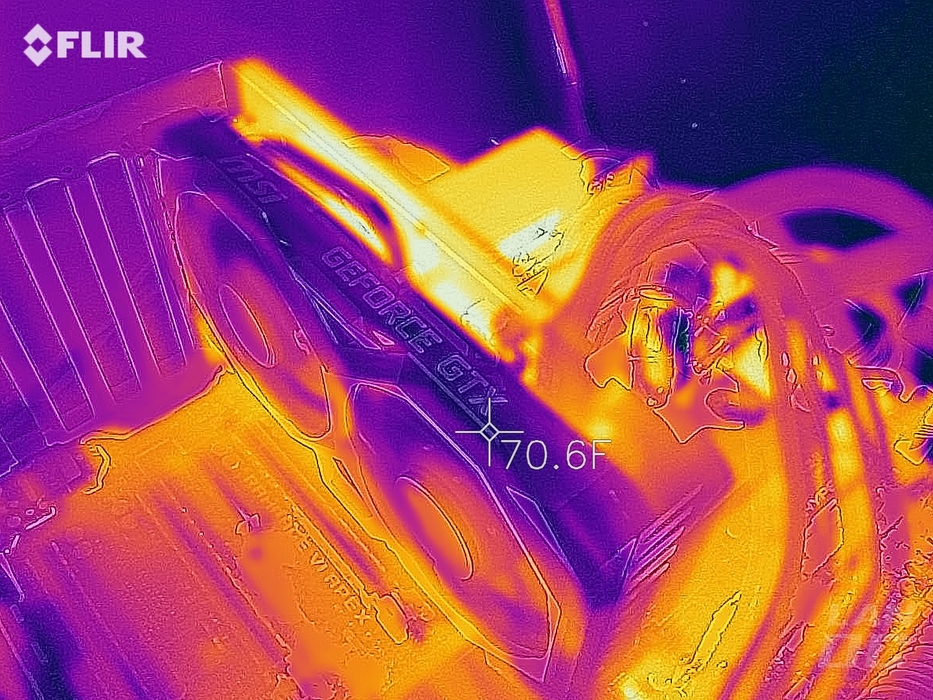 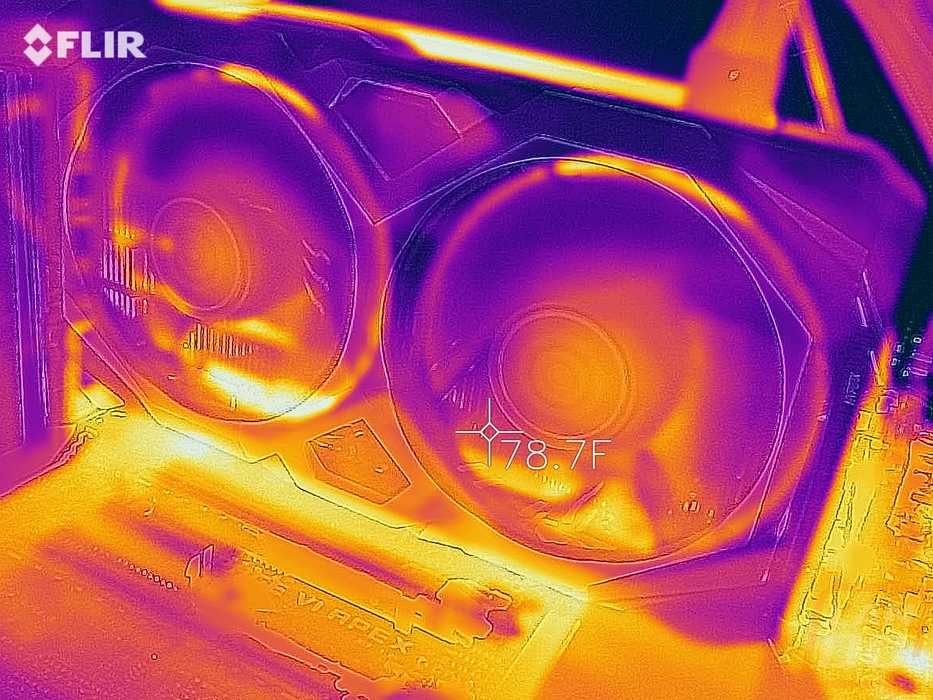 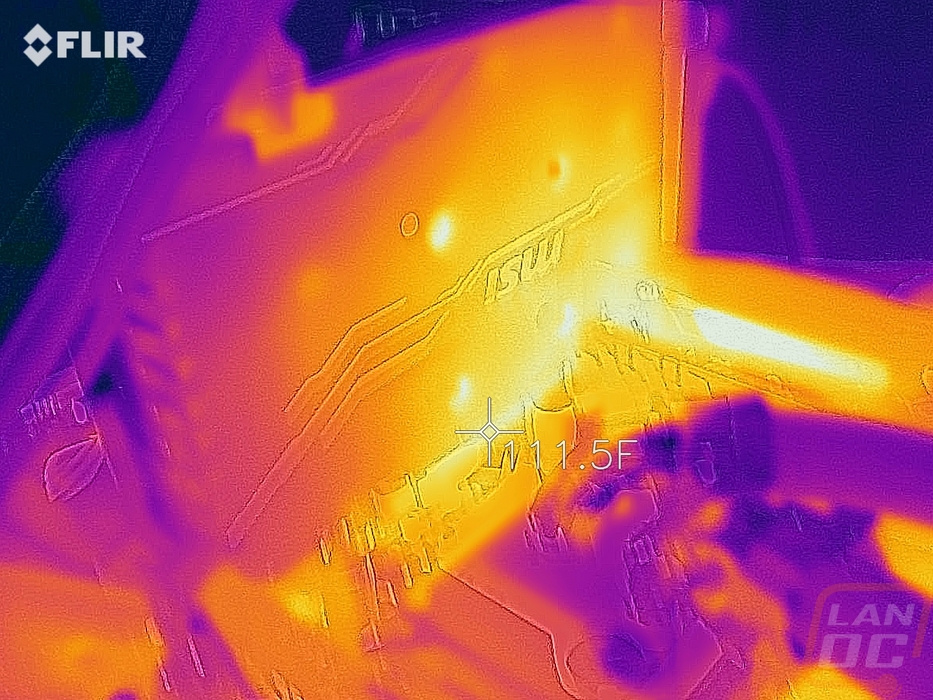 We have 1693 guests and one member online