Some of you may have missed it but Monday the RX 460 officially launched. There wasn’t as much of a fuss about it because the RX 470 was taking most of the attention, but the RX 460 is also Polaris based. It is the first card on the Polaris 11 architecture where the RX 470 and RX 480 are on the Polaris 10. AMD is marketing the RX 460 as their e-sports card where the RX 470 was an HD card and the RX 480 was VR. This might be a little confusing, but the general idea is the RX 460 can’t handle everything at 1080p, but it is designed to work well with the popular e-sports titles like Dota 2 and League of Legends. So today I'm going to take a look at the Gigabyte RX 460 that AMD and Gigabyte sent over and then put it through our normal benchmark suite and see how it performs. That will round off a full week of AMD coverage here on LanOC as well!

Before diving into testing, I did want to include a copy of the GPUz from the card. With issues popping up this year with manufacturers sending review samples that are turned up to their optional OC clocks I want to make sure we keep everything transparent. The RX 460 does seem to be running at the 1212 MHz listed on their specifications listing so we are good to go there. 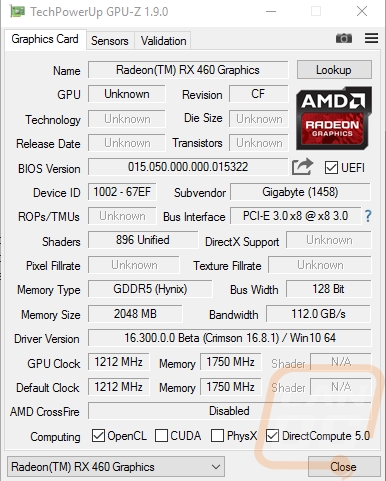 So what’s different on the RX 460? Well Unlike the RX 480 and RX 470, AMD doesn’t promote the 460 as a premium product. This is the meat and potatoes card for casual gaming and for people who play the popular games. AMD specifically notes 90+ FPS in titles like League, DOTA 2, Rocket League, and Overwatch. All very popular games in the e-sports market. They do note that this is at 1080p but just with high settings. This means no AA and not at ultra-settings like we normally test at.

We have 1368 guests and one member online