For my last tests, I always focus on things like power, cooling performance, and noise. These are all performance metrics that not everyone considers, but they are all very important when picking components to go with your video card. You don’t want to get a card that runs too hot without a case to help keep it cool and you wouldn’t want to not have enough power to power everything. Speaking of power, the power usage benchmark was the first test I ran the RX 460 through. Given its low TDP of 75 watts and the lack of any power connection, I knew it would be the lowest wattage card I have tested on the current test configuration. Even then I was still wasn’t sure what I would see. Remember this is our full X99 powered test bench, not just the individual wattage of the card. So at 130 watts for everything while running in game I was surprised. The Polaris architecture when scaled down seems to be more power efficient than the RX 470 and RX 480 that both pulled more than I expected. 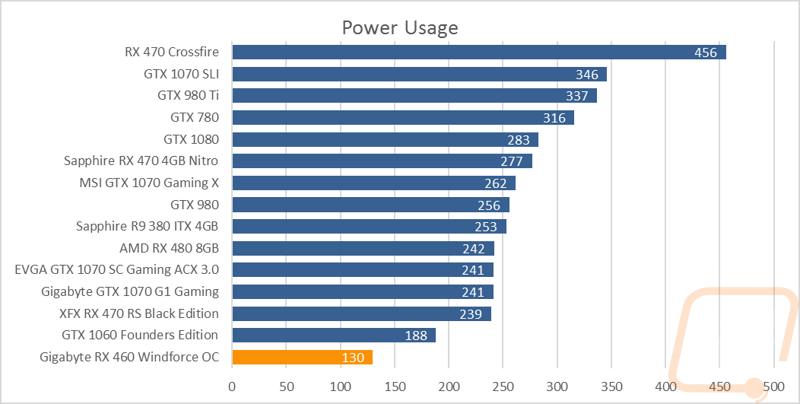 Next, I pulled out the decibel meter and tested the RX 460 Windforce’s noise when running the fan at 100% and at 50%. This gives us a good idea of how loud the card can go and what we should expect when it's in normal use. It also turns the fan completely off when you aren’t putting it under load as well. The dual fan cooler ended up being a little on the high side with the fan turned all the way up but I think this is partially related to Gigabyte using slightly shorter fans than everyone else, helping them have normal height cards. At the slower speed, the card was in line with all of the other cards and frankly 64.2 decibels isn’t going to be noticeable at all in an actual case. I just wouldn’t recommend running the fan on high all of the time.

The last benchmark was taking a look at the cooling performance of the Windforce RX 460. Given the low power draw, you would think it would automatically be very cool, but I was a little concerned when I saw Gigabyte went with a simpler heatsink design behind the fan shroud. With the card set to the stock settings, it ended up running at 65 degrees when being looped in Valley Benchmark. To test out the overall cooling capacity I did the same test but with the fan turned all the way up to see what it is capable of and it ran at an impressive 45 degrees. Basically, the lower cost heatsink design is offset by the lower wattage but the dual fan cooler does a good job with the stock settings and is capable of doing a great job if you crank the fans all the way up.