With less than half of the processing power of the RX 470, the RX 460 is a completely different product than AMDs next step up. The RX 460 stands out against all of the cards I have tested over the last few months because it's not designed to be anything like the high-end cards on the market. AMD went considerably smaller on the Polaris 11 architecture, especially after cutting things down even more beyond that. This puts it in a class of cards that frankly doesn’t fit very well in our normal GPU testing scheme. This is because the RX 460 is designed to run the most popular games at 1080p, but not with the settings cranked up and all of our tests have things like AA turned up and textures that push the limits of even the most high-end cards.

So where does that leave the RX 460? Well, unlike the other Polaris cards I have tested, it uses very little power and doesn’t require a power connection at all. It is very similar to the GTX 950 in both power and performance though I don’t have direct numbers to compare with the exception of our single 3DMark benchmark that didn’t have to get cleared when we moved to the new test bench. In that bench, the GTX 950’s are actually up a little ahead of the RX 460. This is a little concerning considering that is a last generation card and the 1000 series equivalent has yet to be launched.

The Windforce model that I tested ended up having good cooling, a good look, and it doesn’t take up a ton of room. It did test a little loud in our noise testing when the fan was cranked up, but the lower TDP of the RX 460 really shouldn’t ever be getting that hot.

In the end, it really feels like we are actually taking a look at the RX 450. There is such a huge gap between the RX 460 and RX 470 feels out of place in this product lineup. But AMD did at least put out a nice power efficient card for people who just need to play their basic games. The RX 460 has a suggested price of $109 so the performance does fit the price point in comparison to rest of the current lineup. The Gigabyte card I tested has an MSRP of $119.99 so it is a little higher and given the low 2GB frame buffer I do wonder if it shouldn’t be at that opening price. Anyhow, things get a little interesting when we compare the RX 460 to the current GTX 950’s on the market. They bottom out at $125 but a lot of them also have rebates that push the card below the RX 460 pricing. Basically, the RX 460 is a great card, but Nvidia has given them a lot of competition at the same price point. I don’t know if this is just due to them clearing out older stock or if it is a permanent price point, but AMD and Nvidia fans both have good options for playing today's popular titles at decent settings without breaking the bank. It really just comes down to your preference. 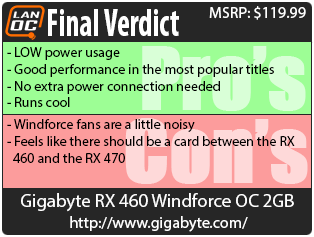 You might call him obsessed or just a hardcore geek. Wes's obsession with gaming hardware and gadgets isn't anything new, he could be found taking things apart even as a child. When not poking around in PC's he can be found playing League of Legends, Awesomenauts, or Civilization 5 or watching a wide variety of TV shows and Movies. A car guy at heart, the same things that draw him into tweaking cars apply when building good looking fast computers. If you are interested in writing for Wes here at LanOC you can reach out to him directly using our contact form.
Discuss this article
Log in to comment
Posts in discussion: Gigabyte RX 460 Windforce OC 2GB