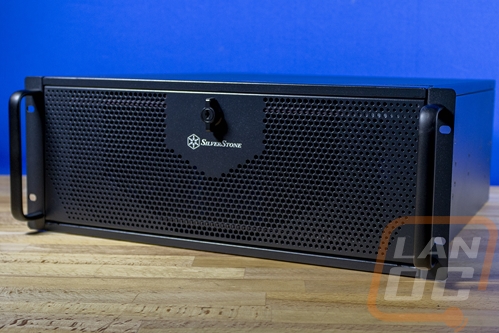 If you have been a reader for a while now you may have noticed that while I do sometimes love smart home products and some of the cloud-based services that go along with them. I have a strong hate for anything that requires a monthly payment and I try to host as much as I can on our own rather than have potentially important data in someone else’s hands. I’ve moved things like Google Photos over to our own storage and even before all of the cloud-based camera services came out we were running our own IP cameras with a basic server running on my main PC. Eventually, to take the load off of that I used a small SFF system that I had to run Blue Iris and then stored the data on a NAS. With me trying to tidy up our server rack I have been hoping to get that server rack mounted but I have also been running into issues with our current setup in just about every way possible so it’s high time that I stop putting this off and rebuild our security server, welcome to Project Icyu.

Before getting into what I’m planning on changing up let's just talk about some of the issues I’m having so we know what needs to be upgraded. Our current setup is built inside of an In Win Chopin and has an Asus ROG Strix Z270-I Gaming motherboard paired up with an Intel i7-7700K. It has 16GB of ram and a Kingston Digital SSDNow UV400 500GB SATA SSD. The original setup would back up footage to a NAS overnight but at some point, we had issues with that and as a band-aid, I added a 5TB WD Black P10 that I previously reviewed. The system itself isn’t too bad of a setup, even now but over time we have expanded the number of cameras we are running and upgraded some of the originals to higher resolutions. I also moved to AI to cut out some of the false alerts we were having and the system is constantly fighting at 100% CPU usage when there is a lot of motion. Our OS hard drive while an SSD is feeling slow compared to what is out there now and storing everything on a USB drive is holding things back as well. Even the 16GB of RAM sometimes is maxed out as well. Some of that could be an easy upgrade to get some more life out of the system but with the SFF case there isn’t any room to expand anything and cooling is a struggle as well especially now that the CPU is being pushed so hard all of the time. All of this has led to me cutting back on frame rates and even turning motion detection off on some cameras to keep things from being completely overloaded. 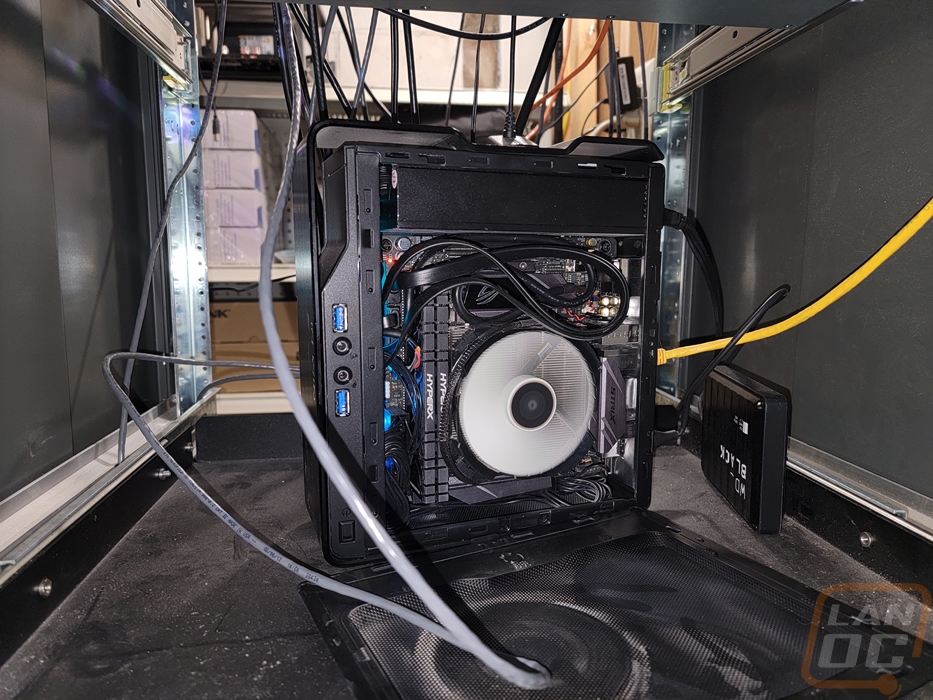 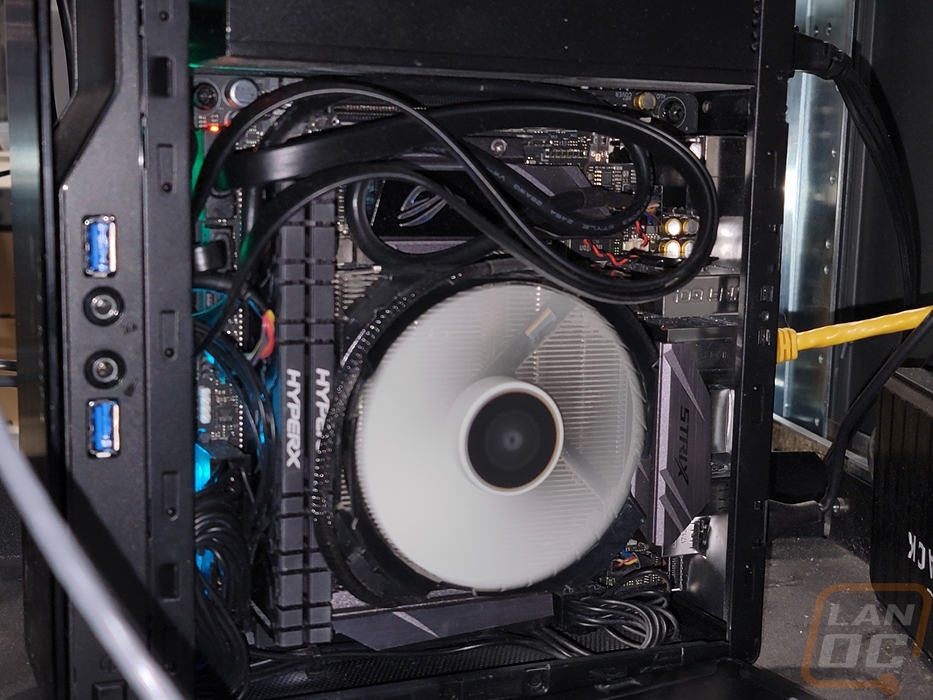 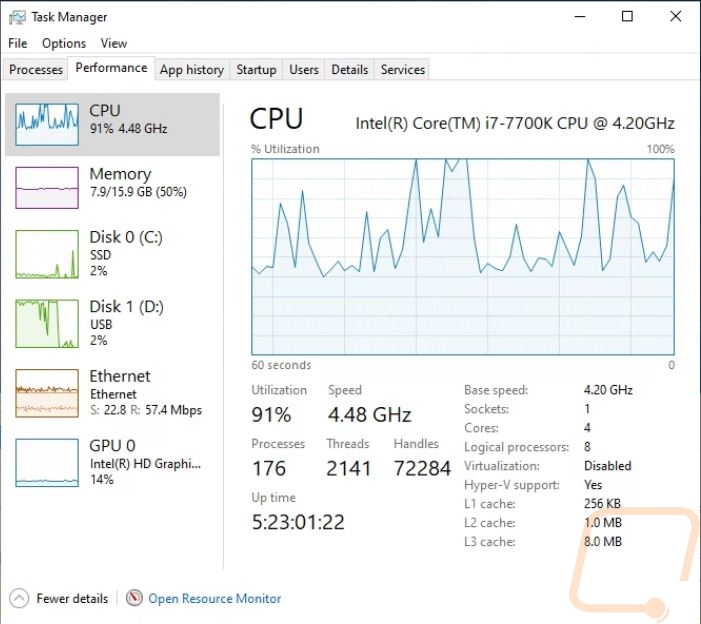 So what are my goals with the new system? The biggest one is to get this rack mounted in a case where I can have plenty of cooling and the room for what we need now and room to expand in the future. Getting it rack mounted should help clean up our server rack and be the push needed to clean out a few things sitting in the rack that aren’t being used anymore. The next big priority is a newer generation CPU that can get us more processing power and when doing this I’m hoping that we might be able to use a little less power by not pushing a former flagship CPU at its max all of the time. To go along with this I’m also toying with the idea of testing out adding in an Nvidia GPU because Blue Iris supports this for decoding and Deepstack AI does as well. I’ve heard that this is sometimes less power efficient so I’m not dead set on that. 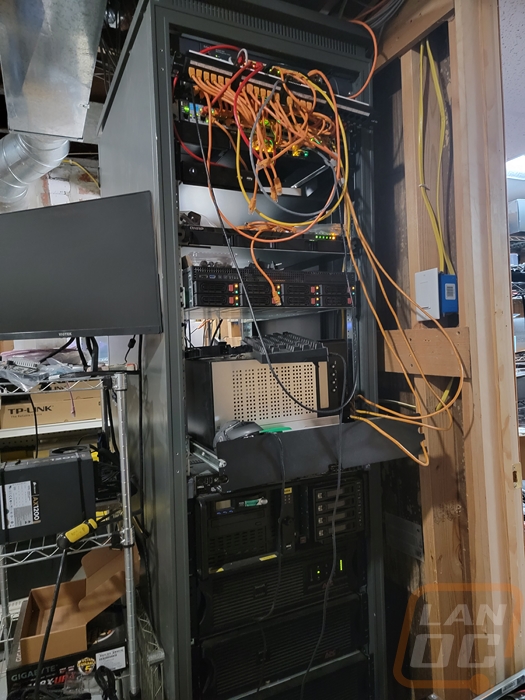 With the new CPU, I can have a newer motherboard that will have more M.2 support and PCIe 4.0 for the current fastest drives. It can also get me 2.5G or 10G networking which hasn’t been a problem but will give a little more bandwidth when needed especially when you have a lot of cameras all feeding to the server and one or more streams going out as well. With my old setup, I recognize that recoding to the main SSD which has the OS installed on it is putting a lot of wear on that drive. I’m hoping to have an OS-only SSD and then a larger capacity drive for that day-to-day recording then using a spinning drive for longer-term storage. I could record right to the hard drive but I’m hoping to have fast loading times by using a fast NVMe PCIe 4.0 drive. Then for long-term storage, I am going to run one or two drives to have recordings saved for longer. When I first built this system we had 30-40 days of footage which was nice if you figure out something came up missing weeks later or if you find out later that something happened in your neighborhood. Because of having more cameras and with resolution upgrades our current setup is only capable of storing a week's worth of footage and that will only get worse when I upgrade the rest of the older cameras in the future. Because of that, I want to have more capacity than our current setup and I would like it to be easier to upgrade or swap out in the future as well. Along those same lines, I need the rack-mounted case to be easy to work on in the future as well with it having the space needed for upgrades and rails to be able to work on things on the spot.

We have 1233 guests and no members online