Overall I think that Call of Duty: Black Ops 2 is a great shooter and will be enjoyed by many. I was honestly a skeptic coming into it, too many times have I shelled out the $60 for a Call of Duty title and been let down by how little they changed, or how changes they made to the game affected it in a negative way. This year they have actually managed to make me a believer again. The dual line story that manages to give a taste of different characters and weapons, and the strike force missions are completely new and exciting and affect the story dynamically with alternate endings and changing plotlines based on the outcome. The overhaul to both the weapon load outs and the new score streaks has made the multiplayer more objective and team based and less about running and gunning as a one man army, and that is a welcome change in my eyes. The new game modes, including the new fun party games are all welcome additions, and the ranked portion of the game has potential to grow and make Black Ops 2 a force to be reckoned with in the competitive scene. The zombies mode was fun enough, but seemed like kind of an afterthought, and the graphics were leagues away from what can be done with modern day technology, but the audio was amazing and the voice acting really made me enjoy the single player campaign. I would say to skeptics and returning fans, Black Ops 2 is definitely worth your attention and a definite step in the right direction for the franchise. I certainly can’t wait to see what the next release brings to the table. 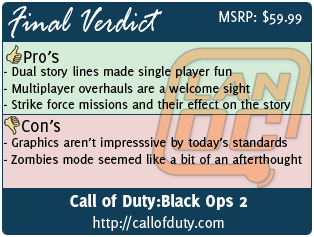 We have 1172 guests and one member online