When 2 Dawn Games contacted us about doing a review on their first title, Ravaged, I was both excited and nervous.  Excited because I really enjoy indie games and playing stuff developed by small game companies. Indie companies are not restrained by being too large. They are able to listen to their fan base and give players what they want (to an extent) and it often leads to some really cool and enjoyable features in game. I was also nervous however because Ravaged because my experience with class based shooters has been very polarized, they are ether amazing or a total flop. Let’s hope that being an Indy game will help Ravaged be one of the great games. With that being said, I head into the post-apocalyptic storm ravaged world that is Ravaged.

With Ravaged being an online only game, I didn’t expect there to be much of a story to the game, the developers however, managed to give enough information about the world and characters so that it doesn’t just feel like you are fighting as a faceless mercenary. Ravaged takes place in a post-apocalyptic world. It pits the two factions of the Scavengers and the Resistance up against each other in constant battle for resources, territory and survival. The Scavengers are a ruthless band of criminals who are bent on taking every last can of gas and inch of land for themselves, and their only opposition as well as the only hope for humanity is the Resistance. The Resistance is a small group of freedom fighters who were able to seek shelter underground before the world went to hell. Each faction has a group of five different players who fight for them. These characters may look different on opposite teams, but it is essentially this games class system. The Grunt for the Scavengers is essentially the same as The Support for the Resistance and so forth. 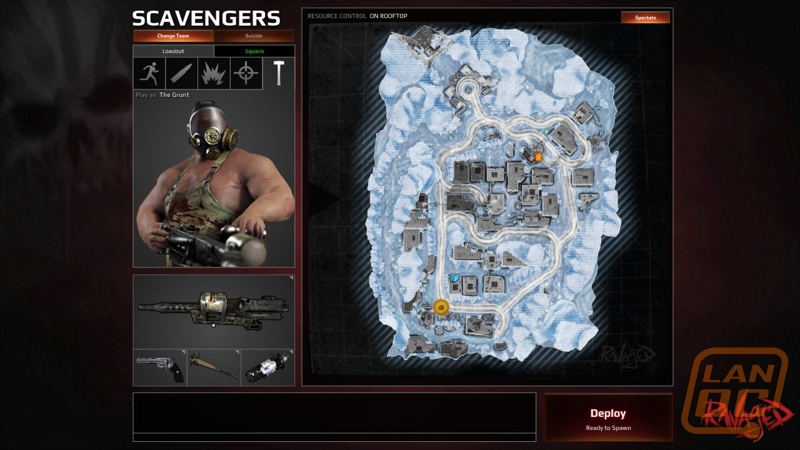