It doesn’t feel like its been over two years now but back in March of 2017 AMD introduced their Ryzen CPUs and without a doubt changed the entire PC market. Things were stagnant in just about every PC market, but especially in the CPU market and the introduction of Ryzen quickly changed things. Before that time the mainstream CPU market got its yearly refreshed quad-core CPU and that was about it. Now today AMD is releasing a mainstream CPU with 12 cores and 24 threads and their low-end APUs are rocking 4 cores. Its been a wild ride and it has had Intel on the defensive. Well today's the day we finally get to take a closer look at the new lineup and AMD sent over the Ryzen 9 3900X and the Ryzen 7 3700X for me to check out. Before I do that I want to dive into the new 3rd generation of Ryzen and the Zen 2 architecture that is powering it. Then from there, we can see how both CPUs perform. Let's go!

So AMD isn’t just introducing a few CPUs today, like with the original Ryzen launch and the Gen 2 Ryzen launch this is a new generation of processors that AMD is bringing out. The branding can get a little confusing because this is Ryzen 3rd gen but it is also Zen 2. The original Zen was the original Ryzen and the 2000 series/2nd gen of Ryzen was based on the same Pinnacle Ridge microarchitecture only they dropped the manufacturing process from 14nm down to 12nm. They also improved on the precision boost which combined with the smaller manufacturing process allowed higher clock speeds, but as a whole, the 2nd generation of Ryzen still had the same 8 cores 16 threads on the highest end CPUs. Now Threadripper was a different story, but for today's context, let's stick with the mainstream lineup.

So what is different with Zen 2? Well, one huge change is that AMD has dropped from 12nm down to 7nm for their manufacturing process. But beyond that Zen 2 has a whole list of architecture changes. 256-bit instructions now run through a single-op for significantly faster performance in creative workloads. The L3 cache has been doubled inside up to 32MB for CCD to help reduce memory latency to help in gaming. They have added a third AGU (address generation unit) to help keep the execution engine better fed with data from DRAM. They added a larger 180-entry register file to give the CPU more immediate access to more working data. The list keeps going and going on the major changes in the architecture from Zen+ to Zen 2 and AMD estimates that together they lead to an IPC uplift of around 15%. This is huge because up until now AMD has been beating Intel by brute force, Ryzen while fast has been behind on IPC (instructions per core) but compensating with more cores and good clock speeds at much better prices than Intel. IPC improvements mean better per core performance which also means a big gaming improvement.

That doesn’t even count clockspeed improvements where AMD is suggesting a 21% improvement. Plus the new lineup is adding additional cores.  Windows has also introduced a big jump in Ryzen performance as well with the May update which posts improvements across new and old Ryzen processors. 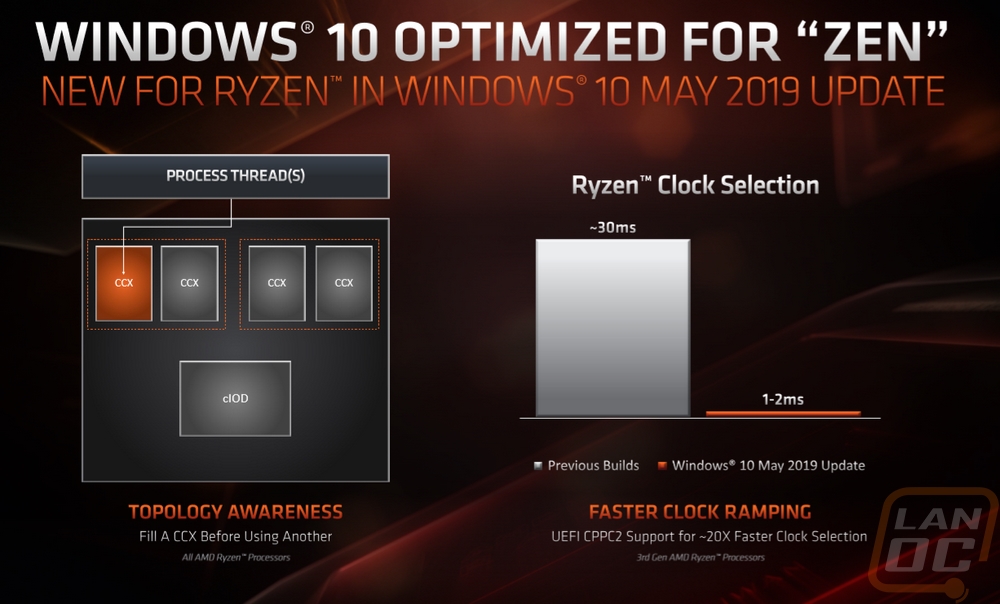 So what does the new lineup look like? Well for starters the new flagship CPU is the Ryzen 9 3900X which is sporting 12 cores and 24 threads. It has a base clock of 3.8 GHz and a boost clock of 4.6 GHz and Intel is positioning it against the i9-9900K(F). The F designation just means it doesn’t have an onboard GPU, just like Ryzen doesn’t have in most of their lineup. Now the 9900K is still higher on boost clock but the 3900X is higher on base clock and has four more cores. That’s a little crazy to think about right? Just a few years ago the 7700K was what was competing with Ryzen with its 4 cores and now you could add those two Intel’s 8 core CPU to match the core count of the 3900X! AMD has two different CPUs lined up with the i7-9700K, their 3800X and 3700X CPUs which are both 8 cores and 16 thread CPUs where the 9700K is a pure 8 core CPU. The only difference between these two CPUs is their clock speeds. The 3800X has just .1 of a GHz bump in boost clock but it is actually the fastest of the entire Gen 3 Ryzen lineup for base clock at 3.9 GHz.

AMD has two CPUs lined up against the i5-9600K as well and like before they both have the same core/thread count at 6 cores and 12 threads. But the clock speeds are what set the two apart. At $199 for a 6 core 12 thread CPU, the Ryzen 5 3600 looks like a hidden gem in all of this. 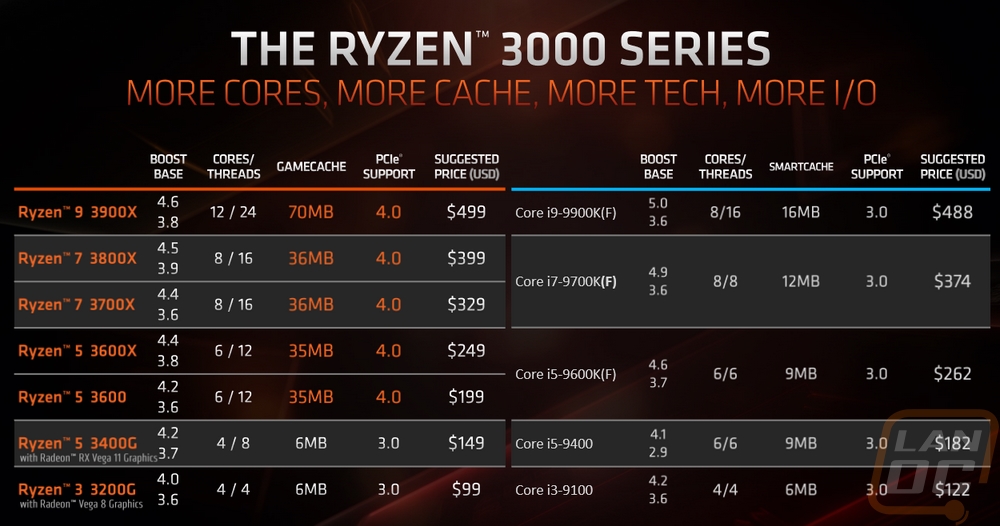 At the bottom of the new lineup, AMD has also introduced two new APUs. The Ryzen 3 3200G and the Ryzen 5 3400G, following the same naming as the original Ryzen APUs. Both In fact, they share a lot more than that with the older models. These two models may have the same 3000 series name but they are still running Zen+ architecture as you can see from the above chart where they don’t have the huge boost in cache or PCIe support. They do however have nice clock speed improvements over the previous models which is really nice. The same goes on the graphics side which is still Vega 8 and Vega 11 graphs depending on the APU, but with higher clock speeds. The 3400G gets a better cooler this time around with the 95w Wraith Spire and it now has Metal TIM like the non-APU Ryzen CPUs have always had. They also have given the 3400G PBO overclocking to help take advantage of that better cooling capability. 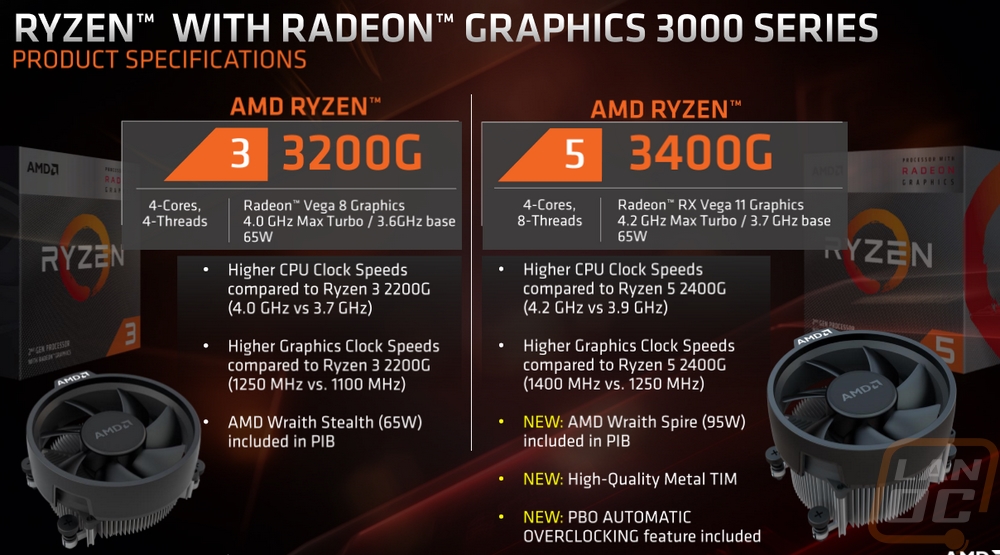 PBO is the short version of Precision Boost Overdrive which AMD has given all of the 3rd Gen CPUs. It was originally introduced with the 2nd generation of Threadripper. With Precision Boost 2 already on the CPU they do already use sensors to measure power, VRM current, and temperatures to maximize clock speeds. PBO effectively raises the limits that Precision Boost already works with and allows for automatic overclocking. In AMD's information, they show what a 200MHz increase in clock speed with PBO could provide in Cinebench R20. 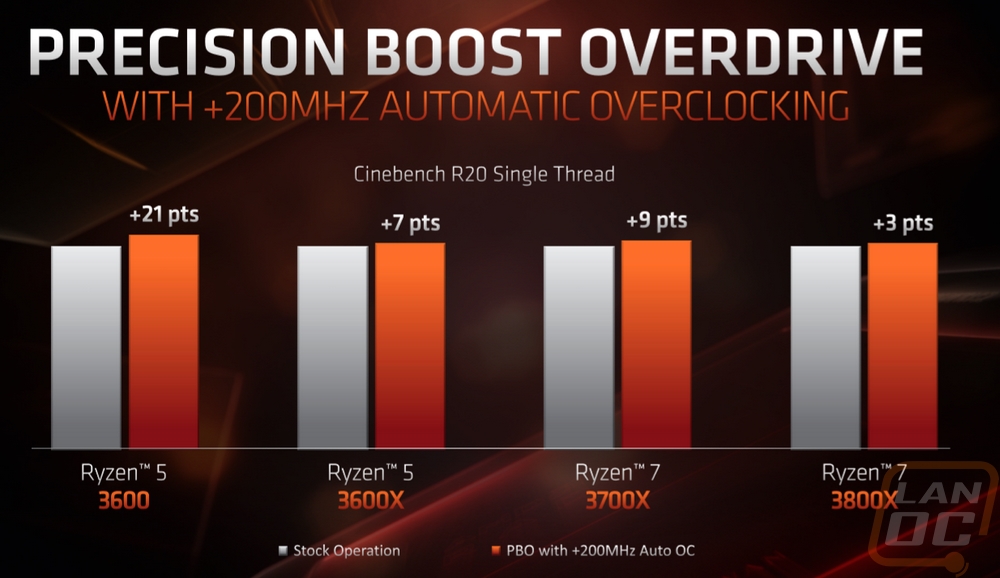 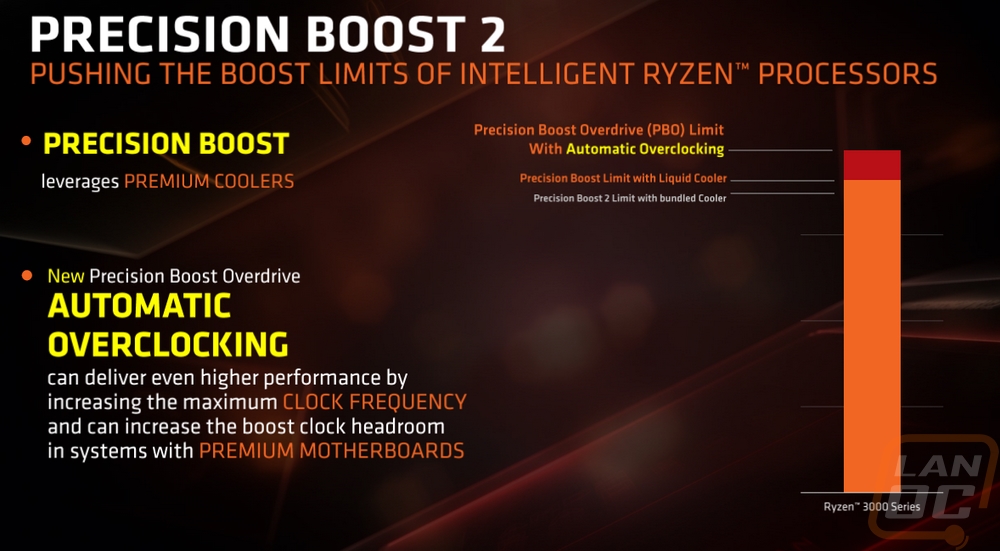 Now a relatively small addition is now ALL of the Ryzen 7 and Ryzen 9 CPUs come with the Wraith Prism Cooler. I’ve done testing multiple times on the Wraith coolers like our original look at them and when I included them in our ITX cooler tests. The Wraith cooler has impressed every time, you might think a stock cooler is just going to get put aside for aftermarket cooling but the Wraith is basically a normal aftermarket cooler, especially after they added RGB. An AIO or high-end heatsink would still be an upgrade, but I love that now all of the CPUs have them. That could save money and get an expensive rig up and running sooner or give a nice option should your AIO pump die, which happens a lot. 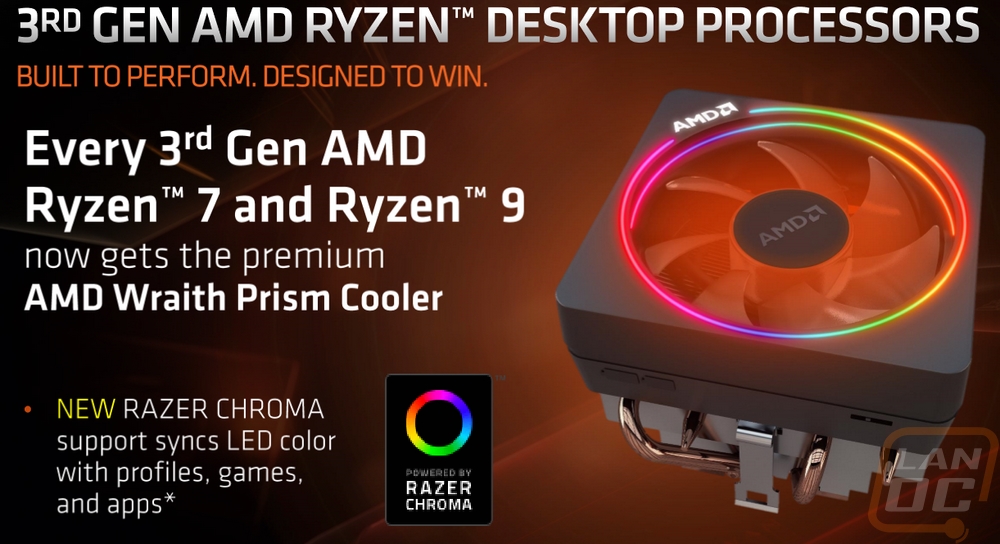 Now AMD isn’t just introducing new CPUs, they have a new chipset as well. Now when they launched Ryzen originally they brought out X370 and with it the AM4 CPU socket. The socket hasn’t changed and with that there physical support for previous Ryzen CPUs. That also means there is some cross compatibility with Ryzen 3 and older chipsets. Basically, X570 supports Ryzen Gen 2 and Gen 3. X470 and B450 support all three generations. The original chipset X370 and B350 support Gen 1 and Gen 2 but Gen 3 support will depend on if the motherboard received a BIOS update. Then A320 does not support Gen 3 at all. So if you went with an original Ryzen setup you might be able to upgrade just the CPU but you can’t move that CPU to X570. X470 will work though. 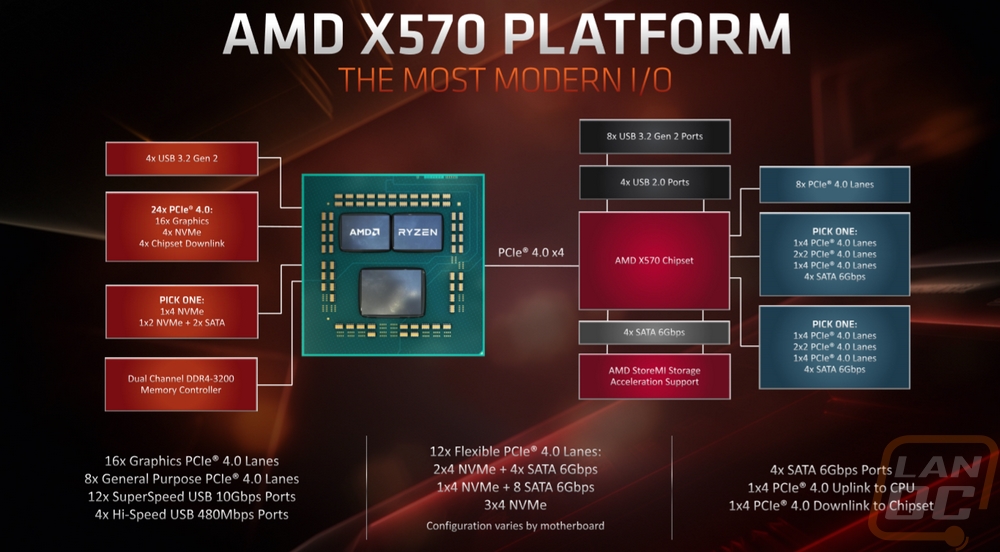 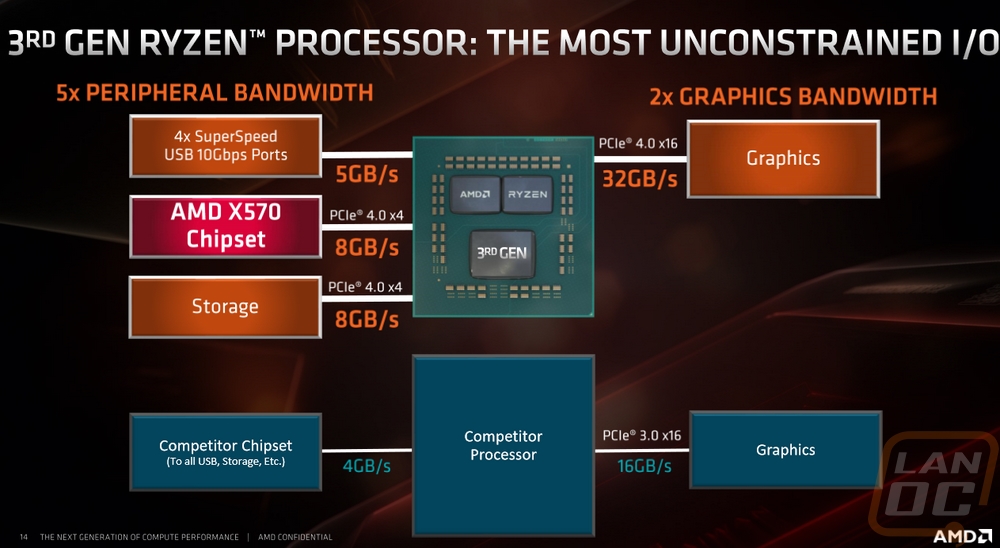 Another big step forward is just how many companies have been pushing X570 flagship motherboards. Prior to Ryzen AMD chipsets were hardly refreshed and boards were out of date and often didn’t even match the same styling as the newer Intel boards. Ryzen changed that, but in AMD's presentations, they were especially proud of the ultra high-end X570 boards that are coming out. This is an indication of the gaming and enthusiast market buying more Ryzen parts and with Ryzen 3rd Gen looking so powerful that those companies are investing into the future expecting them to be popular. What it means for us is those features and board designs that were exclusive to X399 and X299 chipsets are now available on the X570 platform. 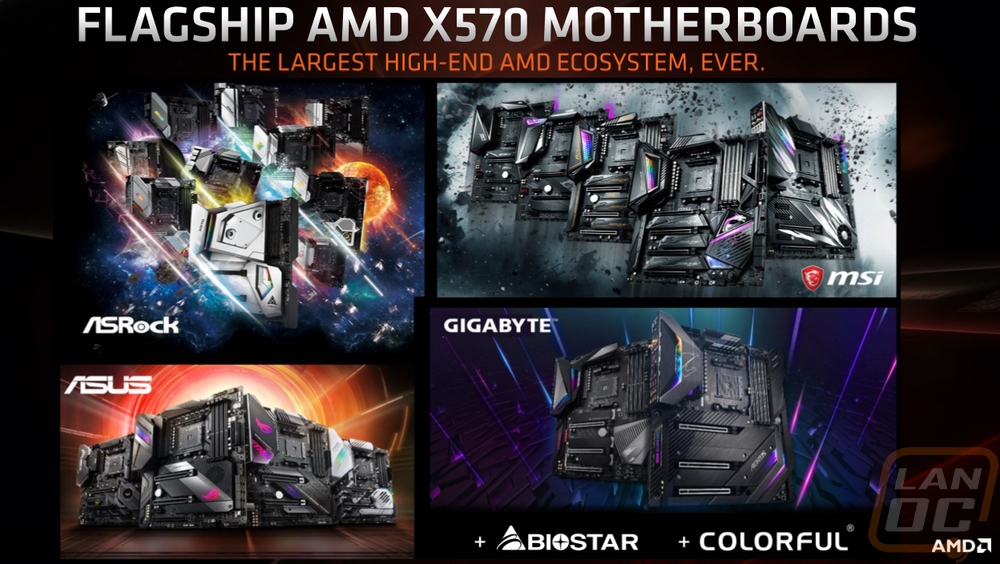 Jumping back to the introduction of PCIe 4.0, this launch also has a few storage solutions also launching at the same time. Right now SSDs are what can use the most bandwidth and Corsair and Gigabyte both have options available. In fact, the AMD press kits included one or the other for testing. 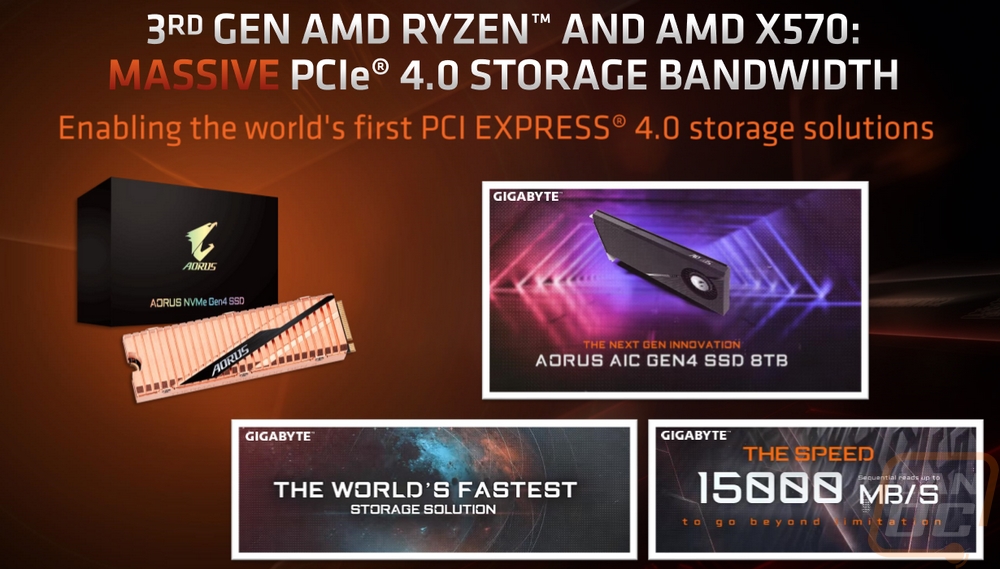 We have 1140 guests and one member online