Well, today is an exciting today. AMD announced their 3rd Generation of Ryzen CPUs back in May at Computex and a steady stream of rumors and leaks have gotten the hype train up and rolling. The same thing happened with the last two main Ryzen launches as well but this time things are a little different. There is a little desperation in the air from Intel and it has looked like AMD might finally be catching up or passing Intel on the IPC side of things. Ryzen has done extremely well when it came to pricing and anything that took advantage of the extra threads. Intel, on the other hand, has had problems for a while now with the move to 10nm leaving a big opening for AMD. So have they taken advantage? Hell yes, they have, even just going off the basic stats the 3900X is an impressive CPU. 12 cores on a mainstream CPU while edging closer and closer to that 5GHz clock speed number. Not to mention X570 adding PCIe 4.0 and a host of other benefits like a large number of USB 3.2 Gen 2 ports.

The actual results were even more impressive for the 3900X, it topped our charts multiple times with the ultra expensive high core count Core-X CPUs edging out a few times and the 9900K with its 5Ghz clock speed getting one or two. But overall the 3900X put a gap between it and the 9900K in anything that uses all 12 cores and in the single core stuff they are very close together. The 3700X was even more interesting because it basically ran with the 9900K in everything.

Now gaming performance has been an ongoing issue with Ryzen CPUs and AMD has closed that gap a large margin but the 9900K did still outperform. That extra clock speed is making all the difference there. But with improvements with Zen 2, especially the much larger cache, games finally working out Ryzen support, and windows updates optimizing things gaming on Ryzen is here. Honestly, the only other issue I had with either CPU was them running a little warm. Memory compatibility was fixed long ago, but it seems it is even better now with high clock speed memory which Ryzen performs even better with.

AMD has always been great when it comes to pricing and initially that $499 price tag for the 3900X might be a little bit of a shock but when you get down to it and see the performance, the amazingly high core count for a mainstream CPU, PCIe 4.0, and everything else I don’t think they are wrong in the pricing. Especially when you see the 9900K being at a similar price. The 3700X becomes an even more interesting option though with it running with the 9900K in a LOT of our tests and it is priced at $329. Intel isn’t including a cooler where AMD is including a solid performing heatsink with both the 3900X and 3700X.

It felt weird putting a $499 price point in as a pro but when you have it competing with the Core-X lineup when it comes to multi-threaded applications and beating the 5Ghz 9900K in just about everything except gaming I think it ends up being a solid price. The Ryzen 7 3700X is even more impressive at its price. It has the same MSRP as the 2700X at launch but performs up with the 9900K. This is the CPU that is going to make Intel worried I think. 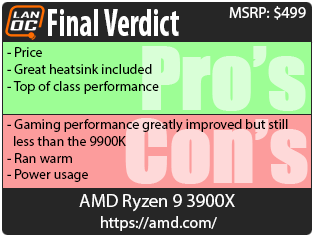 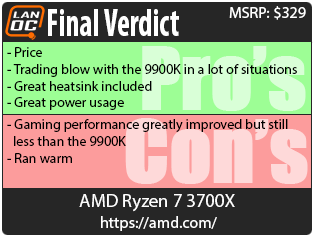 You might call him obsessed or just a hardcore geek. Wes's obsession with gaming hardware and gadgets isn't anything new, he could be found taking things apart even as a child. When not poking around in PC's he can be found playing League of Legends, Awesomenauts, or Civilization 5 or watching a wide variety of TV shows and Movies. A car guy at heart, the same things that draw him into tweaking cars apply when building good looking fast computers. If you are interested in writing for Wes here at LanOC you can reach out to him directly using our contact form.
Discuss this article
Log in to comment
Posts in discussion: AMD Ryzen 7 3700X and Ryzen 9 3900X

We have 1043 guests and no members online