The last batch of tests are power usage and thermals. For some people neither will matter at all, but if you are running in a smaller build it can become important. Same goes for thermals when it comes to cooling, you can sometimes see better performance when using better cooling. Before I get into that though let's take a look at the power usage from the two CPUs. I run two tests, one that uses wPrime to load up the CPU and a second one where I use the AIDA64 FPU stress test. Then a system idle number as well. All wattages are picked up using a Kill-A-Watt on the entire test bench so idle GPU load and motherboard power are also included. Now with the 3900X the test bench pulled 202 watts in wPrime and 89.8 watts at idle. This isn’t all that bad, especially when you compare it to the 9900K which pulled 239. Intel has a much better idle power draw. Now with the AIDA64 FPU stress test, you can see that it hits the CPU harder, in that test the 9900K throttles back from its 5GHz and the gap between the two is a little closer. The 3700X is MUCH better though pulling 177 in the FPU test and 148 watts in wPrime. 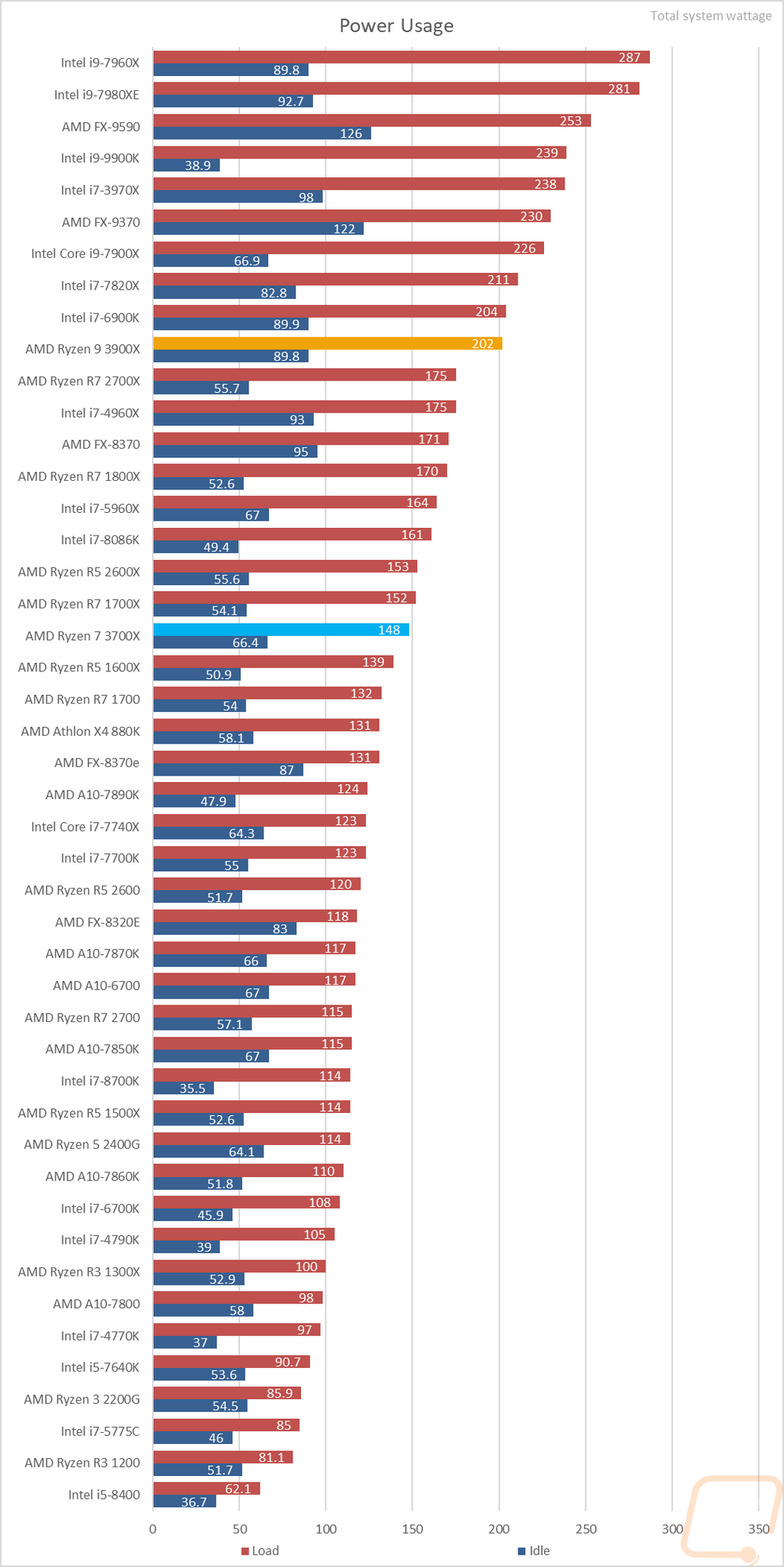 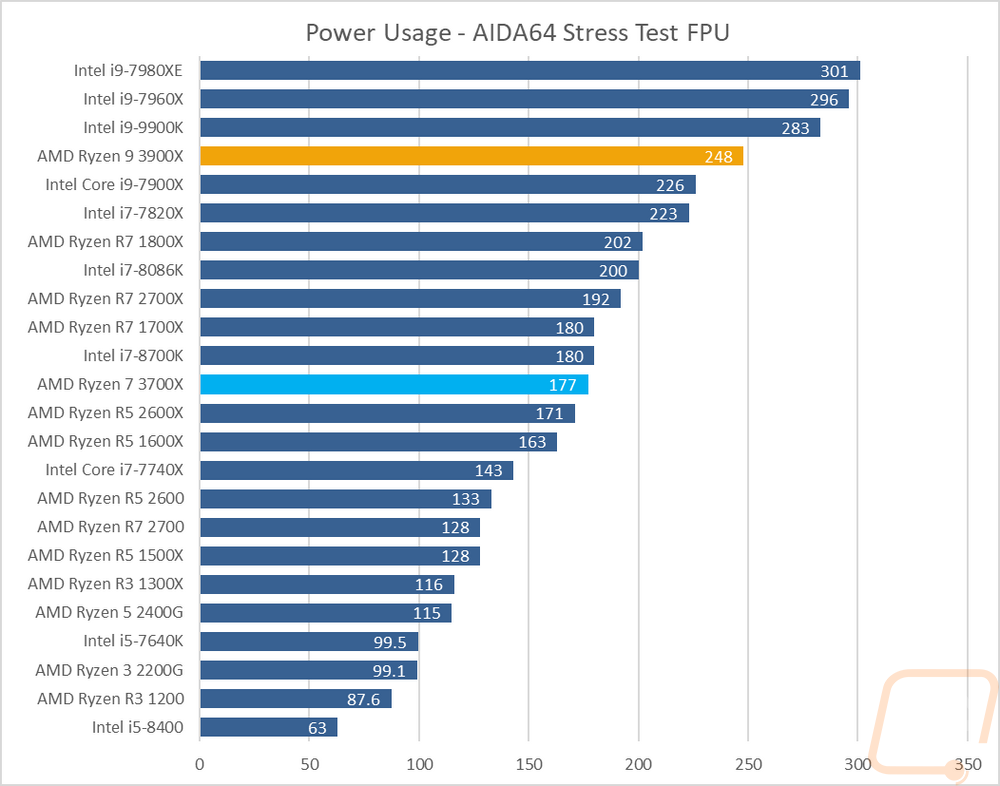 As for thermal testing, I do use the on CPU sensor and with that comparing from CPU to CPU is hit and miss so take these results with a grain of salt. Now, this is where the CPUs TDP comes into play. TDP is Thermal Design Power but it is given in a wattage rating so it can make you assume it is a power rating. The Ryzen 9 3900X has a TDP of 105W and the Ryzen 7 3700X has an impressive 65W TDP. For testing, I used AIDA64’s stress test with the FPU load which is a little unrealistic as I have found in my cooler testing. But it does give you a good look at the max thermals. For results, I use the CPU readout on Intel and the CPU Diode, this gives us a look at the on-die, not at the heat spreader. For the cooler, every CPU tested uses the Noctua NH-U12S which is as middle ground as you can get for a heatsink with its 120mm fan, single tower design. The 3900X ended up running hotter than I expected. They are packing a lot into the CPU and they aren’t exactly pulling back on clock speeds. In fact, the way precision boost works has it working to get the most out of the CPU. With that, the 3900X was running warmer than our 9900K but the 3700X is a lot better while still not what I would call cool. If you have any reason to be hitting the CPU as hard as the FPU stress test does then I would suggest upgraded cooling, but realistically in the rest of my tests neither was getting up into these temps and a normal cooler or the always great Wraith Prism which is included with both CPUs will get the job done. 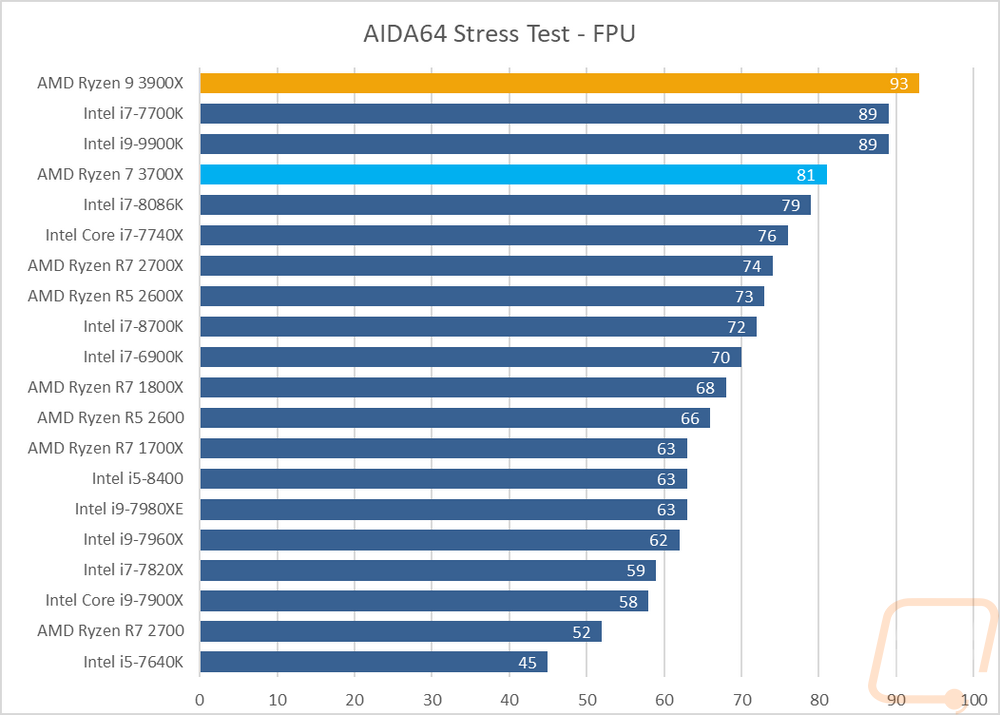