Of course, like always, benchmarks are what I’ve been looking forward to seeing. We know the 3900X is sporting 12 cores and 24 threads and the 3700X with its 8 cores 16 threads. They both have that upgraded cache as well. What I’m curious about in my testing is to see of course how the 3900X compares with the 9900K. But I’m also curious how the 3700X compares with AMD's own 2700X Gen 2 Ryzen CPU. They are extremely similar, they have the same core/thread count and the 2700X has a base/boost of 3.7/4.3 vs the 3700X’s 3.6/4.4 so they are close with the 2700X having a better base but the 3700X has a higher boost clock. That comparison should show us how the Zen+ to Zen 2 changes have affected performance.

For my first two tests, I went with X264 HD benchmarks 4 and 5. These give us a look at encoding FPS. The first pass on both favors clock speeds and the second pass on 5.0 likes higher core counts. In the end, the 3900X topped the charts on all three results. In the 5.0 benchmark, the 9900K came in second but in the older 4.0 test, the 3700X actually came in second which is very interesting. Those two getting close in performance is a scary thing for Intel given they both have the same core count and the 9900K actually has a higher boost clock. But overall the 3900X dominated with nothing even in the same class. 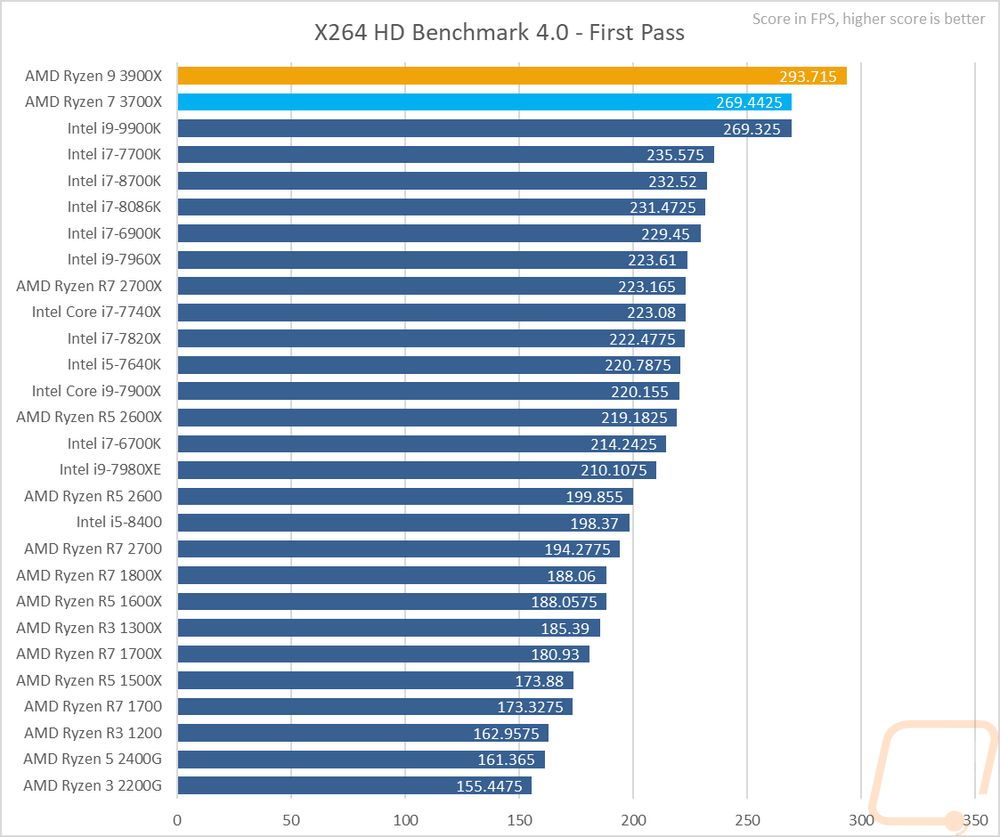 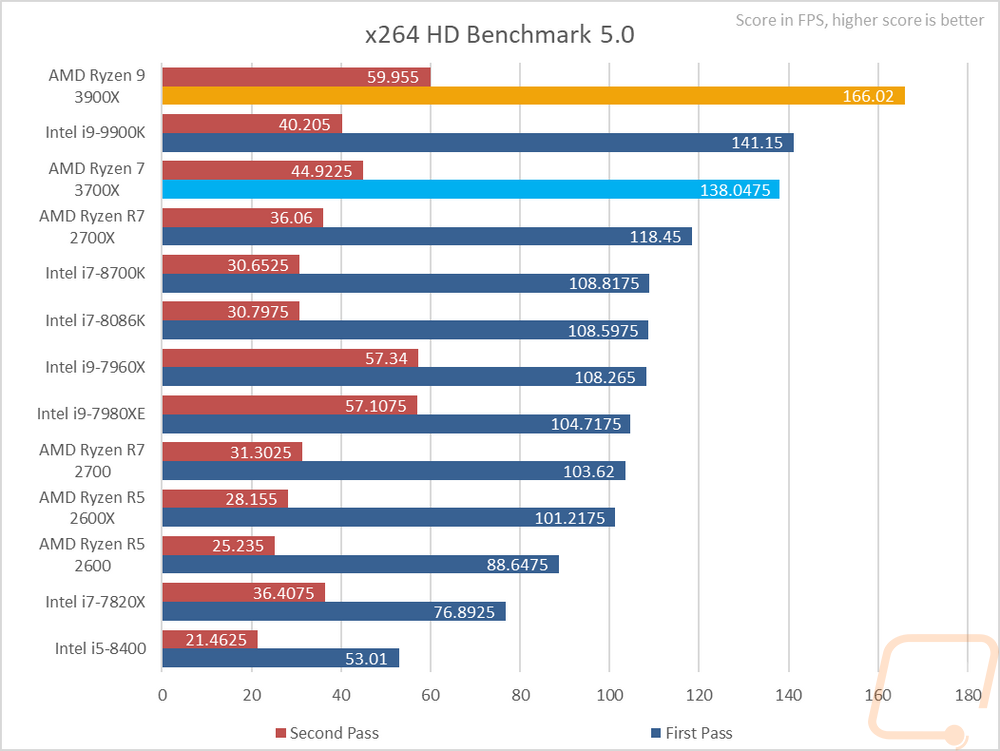 Continuing with the video encoding theme I also have handbrake which is a which is an open source transcoder. For this test I am taking a 4k video down to 1080p 30 FPS, the results are the average FPS of that task. The 7980XE still did extremely well here if nothing else but with its number of cores with its 18 cores. The 3900X was close behind though and the 9900K was actually a little over 10 FPS slower and not far ahead of the 3700X. This is a good look at the 3700X and 2700X comparison though with 8.4 FPS between the two. I also tested with the Cinegy Cinescore benchmark. Cinegy is a professional level production software and they test encoding performance across a huge number of file types and resolutions to put together a score. Once again the 3900X is at the top, beating out the 18 core 7980XE by a small amount. The 3700X didn’t keep up with the 9900K here, falling in between it at the 8700K. 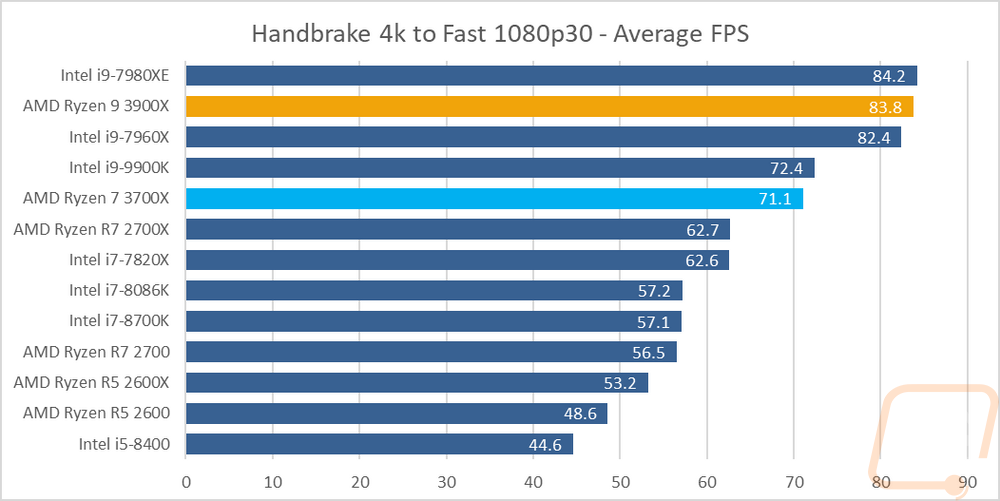 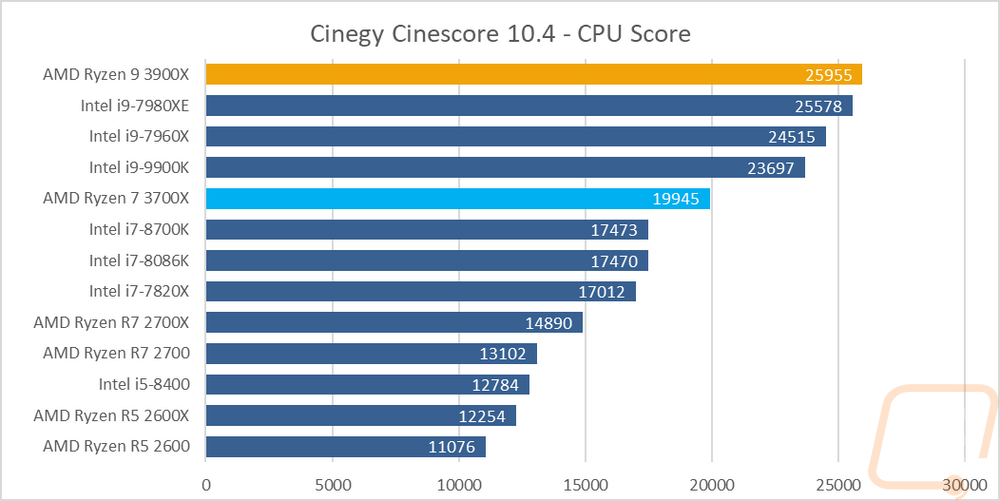 3D modeling is always popular and the open source program blender is one of the best ways to get into it. I’ve run their standard benchmark on the quick benchmark setting. This test just times running through two files being rendered. The high core counts of the 7980XE help a lot here with the ranking here basically sorted by the core count but look at the gap between the 9900K and 3900X and the 3700X wasn’t too far behind the 9900K as well. 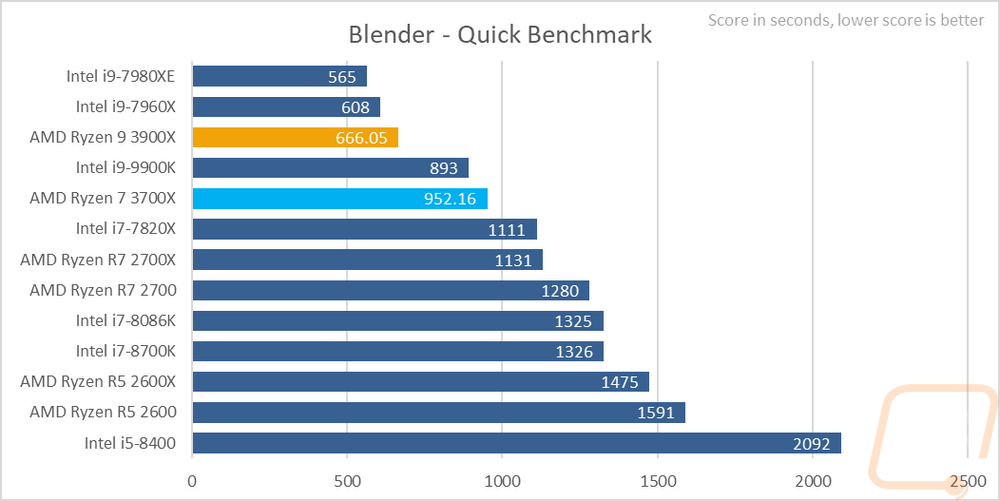 Without a doubt all of my favorite tests let us look at both multicore and single core performance and Cinebench has been in my benchmark suite for years because of this. I have the old R15 test as well as the new more demanding R20 test, both with single and all-core results. In R15 I still have the 7980XE and the 7960X ahead with their core counts but look at how far ahead the 3900X is from everything else. It is right up there with the highest end Core-X CPUs which is really crazy when you take the pricing into account, not to mention the 3900X is on a mainstream platform. The 7900X, on the other hand, is a 10 core CPU which helps it stick with the 3700X, but check that out the 3700X beat the 9900K here. The R15 single core results are more exciting, look at how all of the Gen 1 Ryzen CPUs are at the bottom, the Gen 2 Ryzen are a little below half and now Gen 3 are up near the top just behind the 9900K and the 8086K which are both 5GHz CPUs. The R20 single core results are similar but the longer test dropped the 8086K down below the 3700X and both are chomping at the 9900K’s heals. But then the R20 multi-core results when you don’t have the Core-X CPUs really show the gap between the 3900X and the 9900K in tasks that can use both clock speed and the high core count. 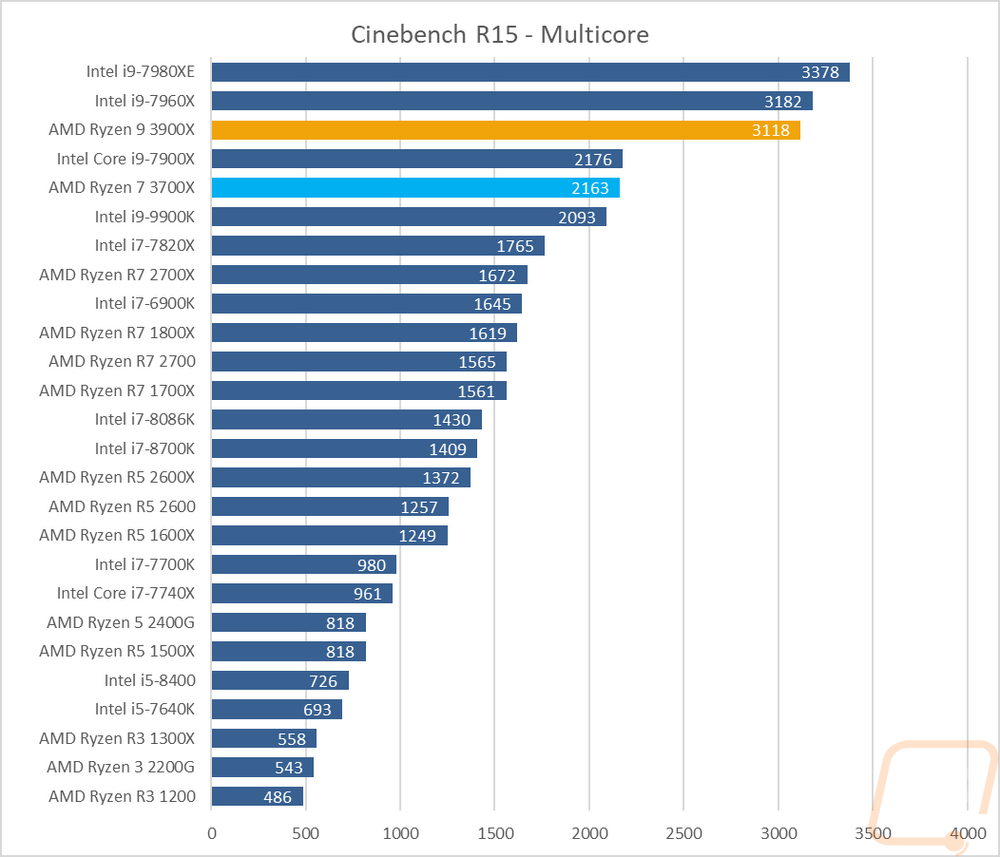 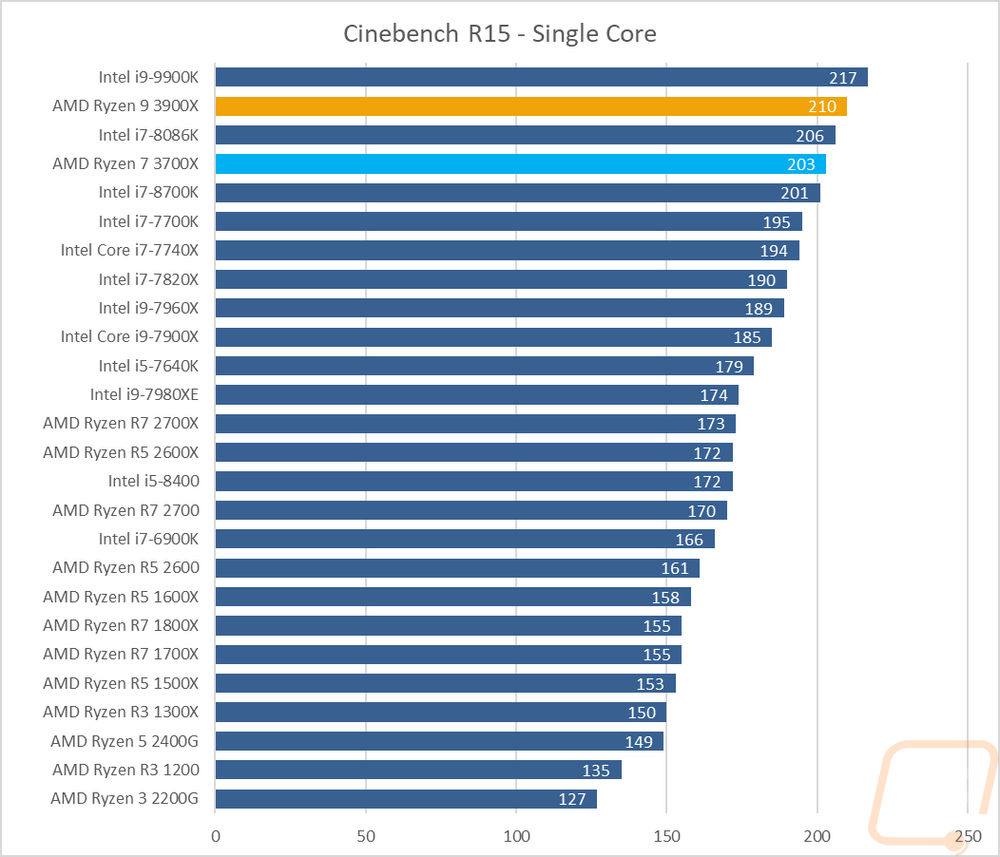 Ray tracing is picking up on the GPU side of things, but when it comes to sending photos and sometimes videos it has been a thing for a while. I’ve run two benchmarks that check out the performance and unexpectedly both love high core counts but POV-Ray also gives us a look at single core performance. As expected the 3900X is running with the high-end Core-X CPUs while the 3700X is coming in not too far behind the 9900K in both tests. 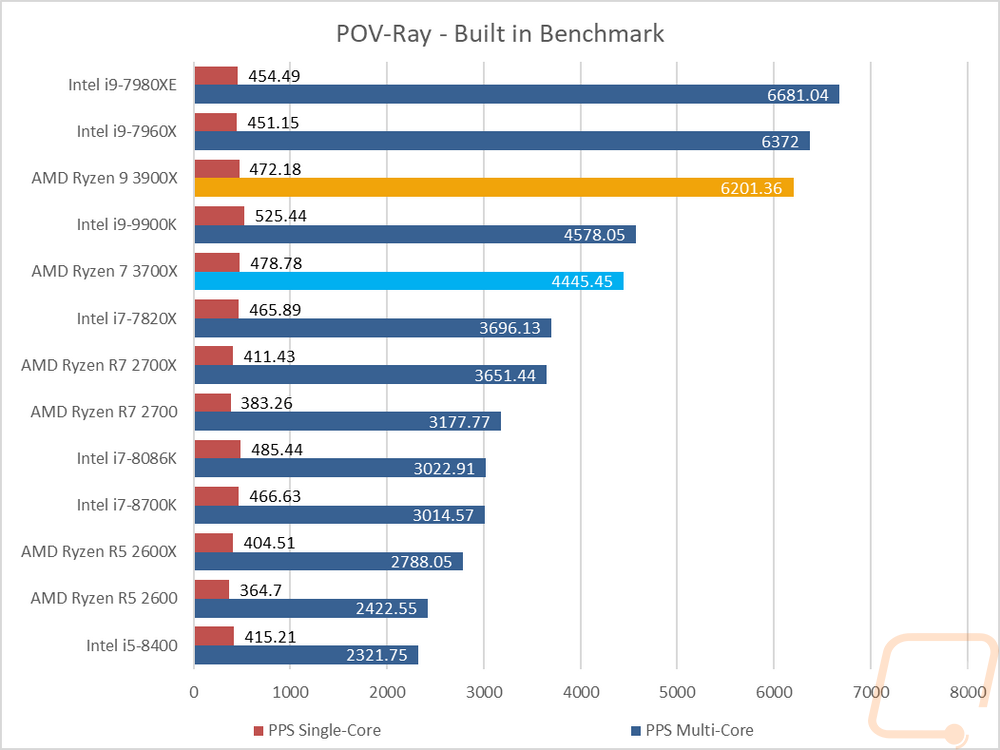 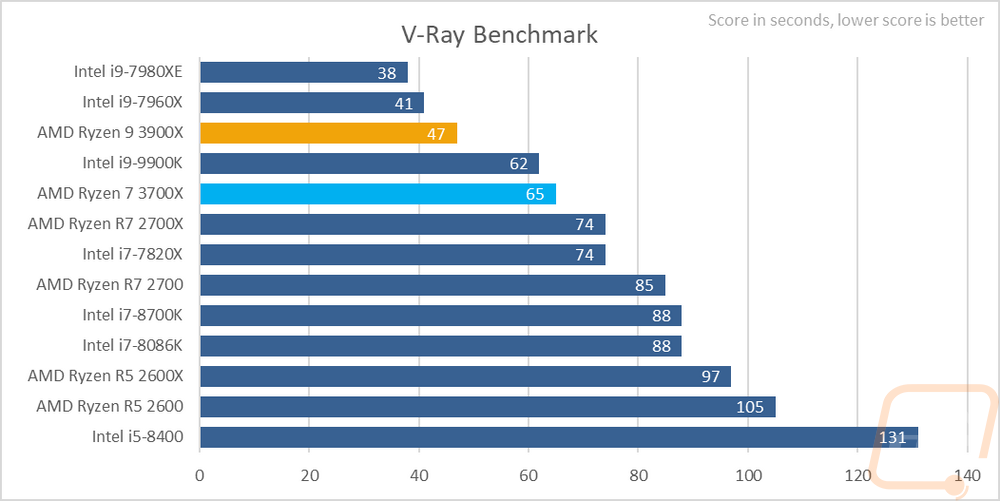 CPUz is well known as a way to check out some information on your CPU, motherboard, and ram but some people might not know they also have a simple benchmark in it as well as a stress test. It has both single and multi-thread tests which I love. The single core results tell us what we already knew really. The 9900K is still at the top for IPC with the 3900X in second, 8086K in third very close to the 3700X which is forth. The multi-thread test, however, pulls all of the higher thread count CPUs to the top including the 7980XE which is again after than the 3900X. But the gap from there on down is large. 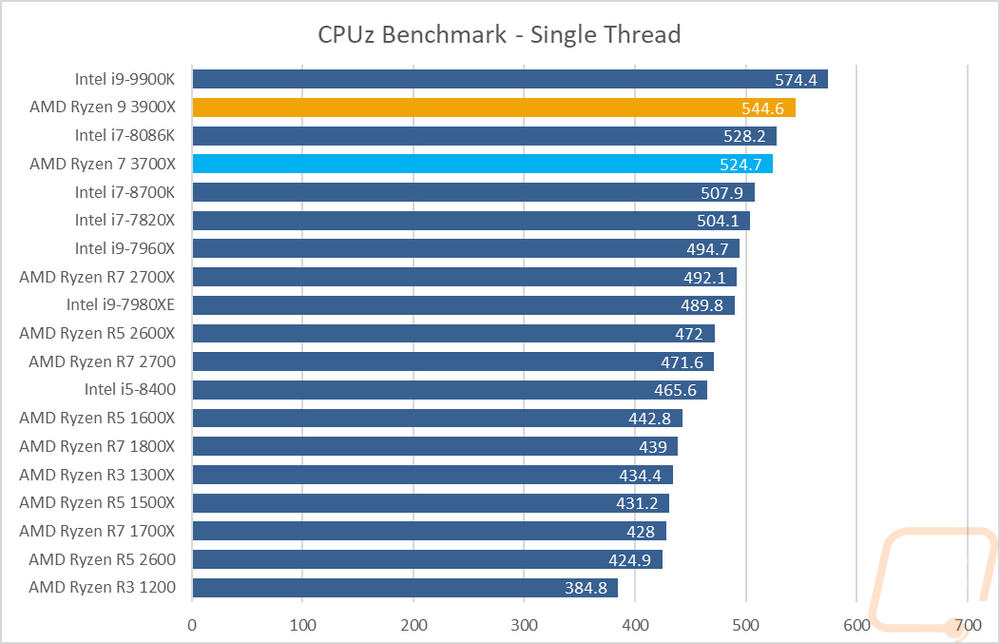 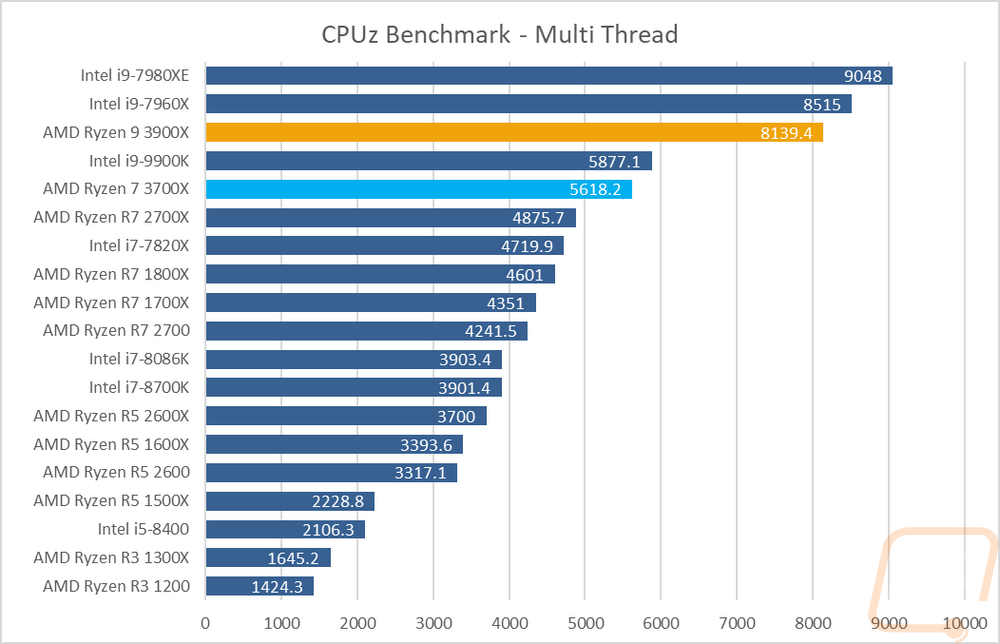 wPrime is a solid but simple test that calculates Pi to 1024 million digits and is timed. Its simplicity is what makes it popular with overclockers and because it likes both clock speeds and overall core count. The 3900X was very close to the two high core count Core-X CPUs with the 9900K and 3700X right with each other 23 seconds later. 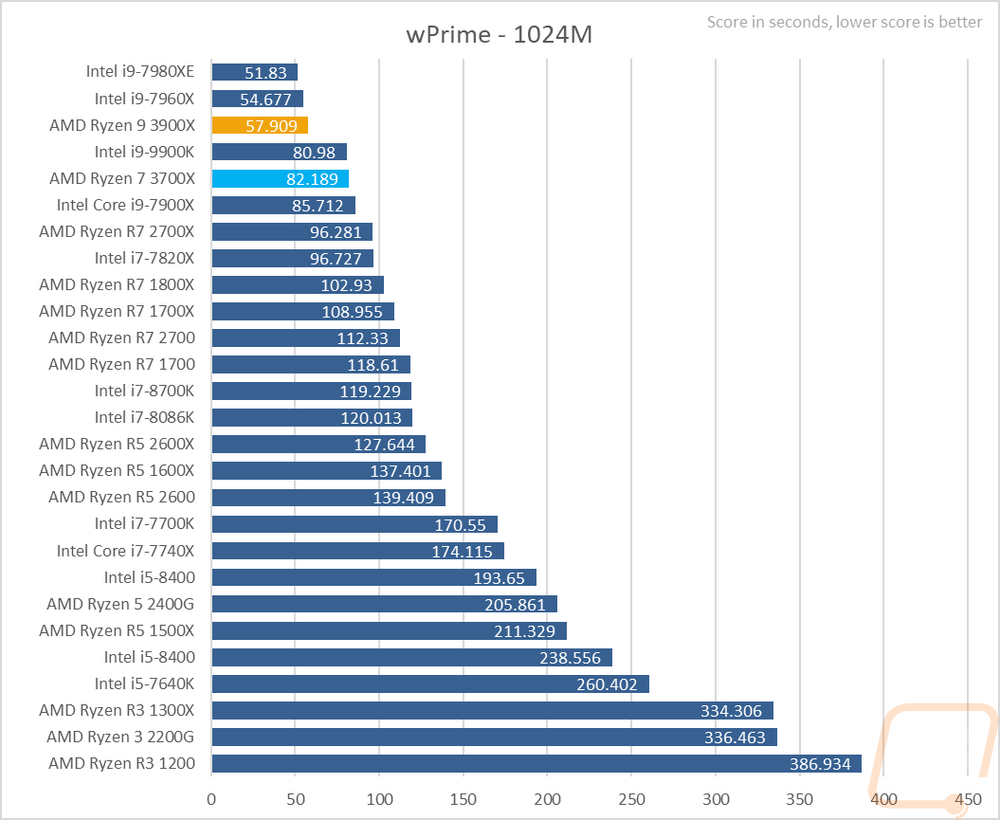 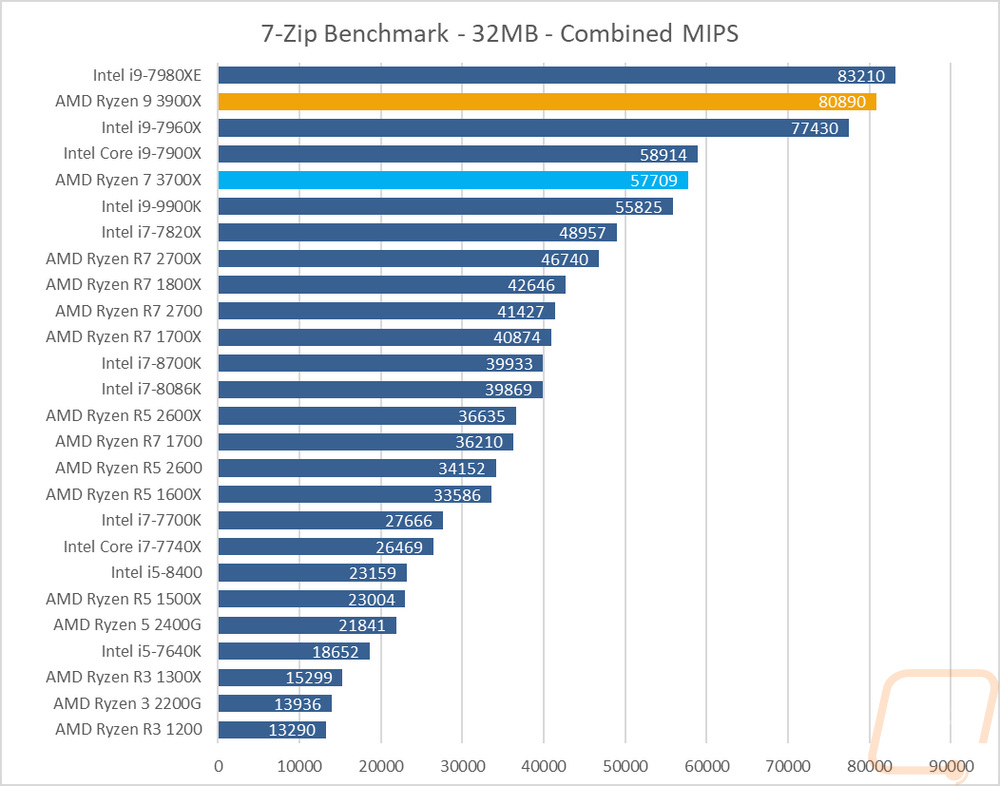 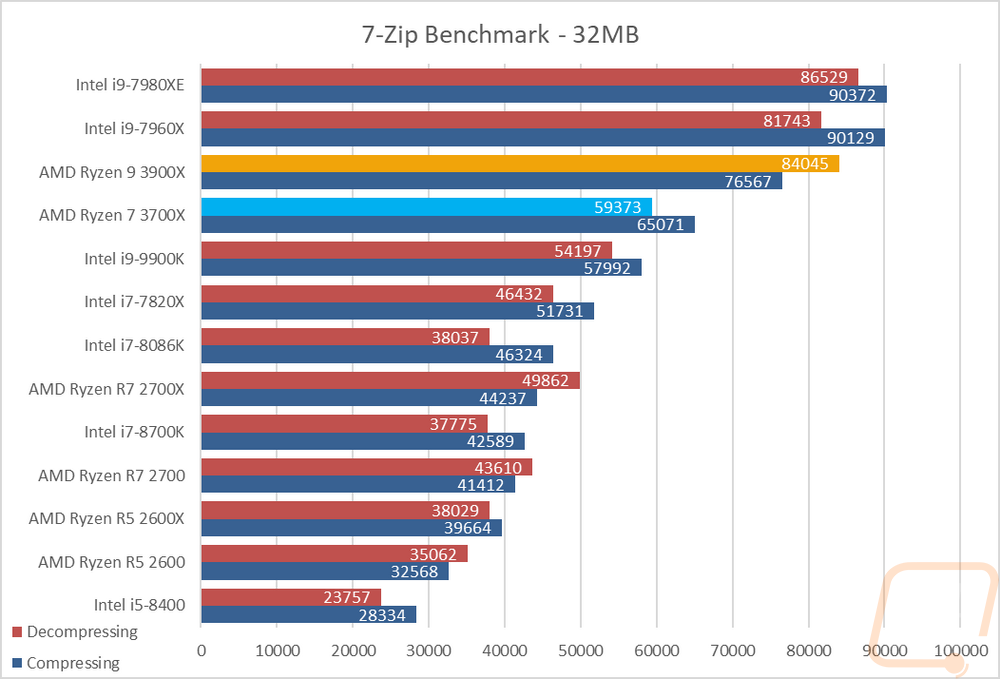 Jetstream 2 takes a look at in browser java HTML5 performance. This is where a lot of people use their PC the most, myself included. I’ve found that it does normally prefer clock speeds but as you can see with the 8086K being behind a little it isn’t only clock speeds. The 3900X, 3700X, and 9900K all basically came in with the same score. Having the 3700X slightly ahead is interesting, but not the first time at all that it favored a lower end CPU, as you can see the 2600X in over the 2700 for example.

For Passmark I just ran the full CPU portion of the test which runs a list of tests and gives us an overall score. The high core count CPUs still top the charts here but the 3900X and 3700X are out ahead of everything else by a nice gap. 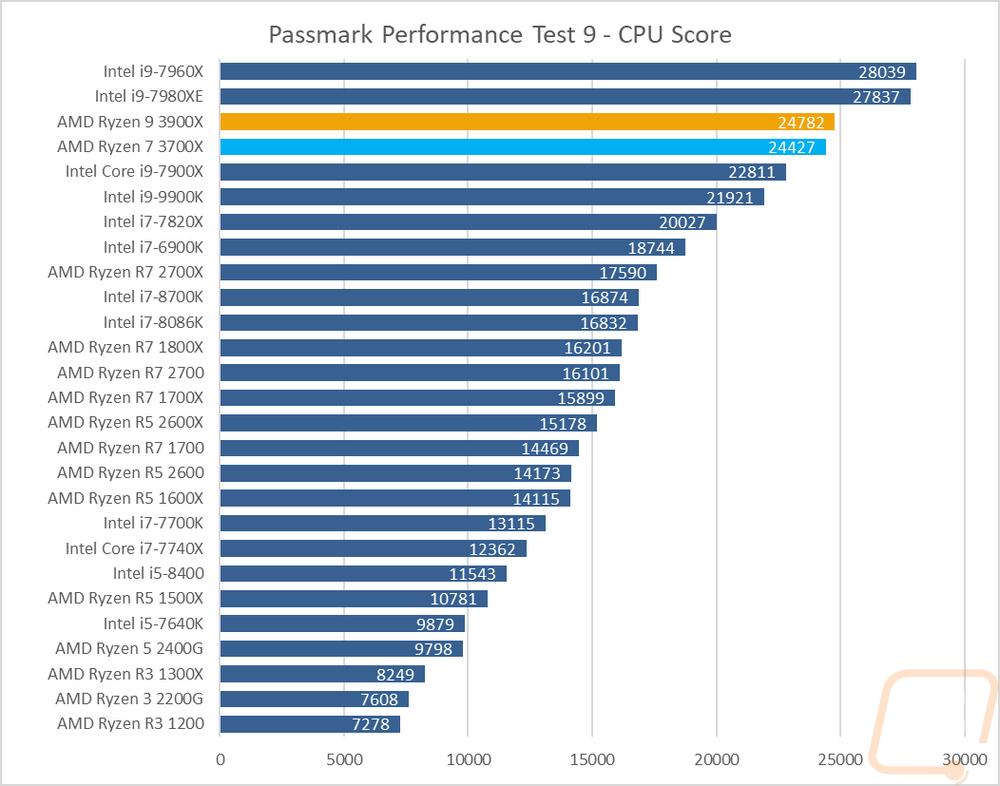 PCMark 10 is a great test because it tests things like video calls, browser performance, excel and word performance to give an idea of real-world performance. It tends to like higher clock speeds. Interesting enough this one had the 3700X ahead, just like Jetstream did and this was mostly because of the essentials portion which does a lot of browser and java/html5 testing. The 9900K still tops the charts here but the top four that we have seen over and over are in the top here again.

Dolphin 5.0 is a Wii emulator and like most emulators, it doesn’t care about high core counts at all. In fact, it only runs two in total. From past experience, it favors Intel a lot as well. You can see just how much the 3900X and 3700X have improved here at 100 seconds was cut off between them and the 2700X but its Intel bias still shows a lot. That said I think you could get away with running these without any issues at this point where some of the earlier Ryzen CPUs I don’t think that would have been the case. 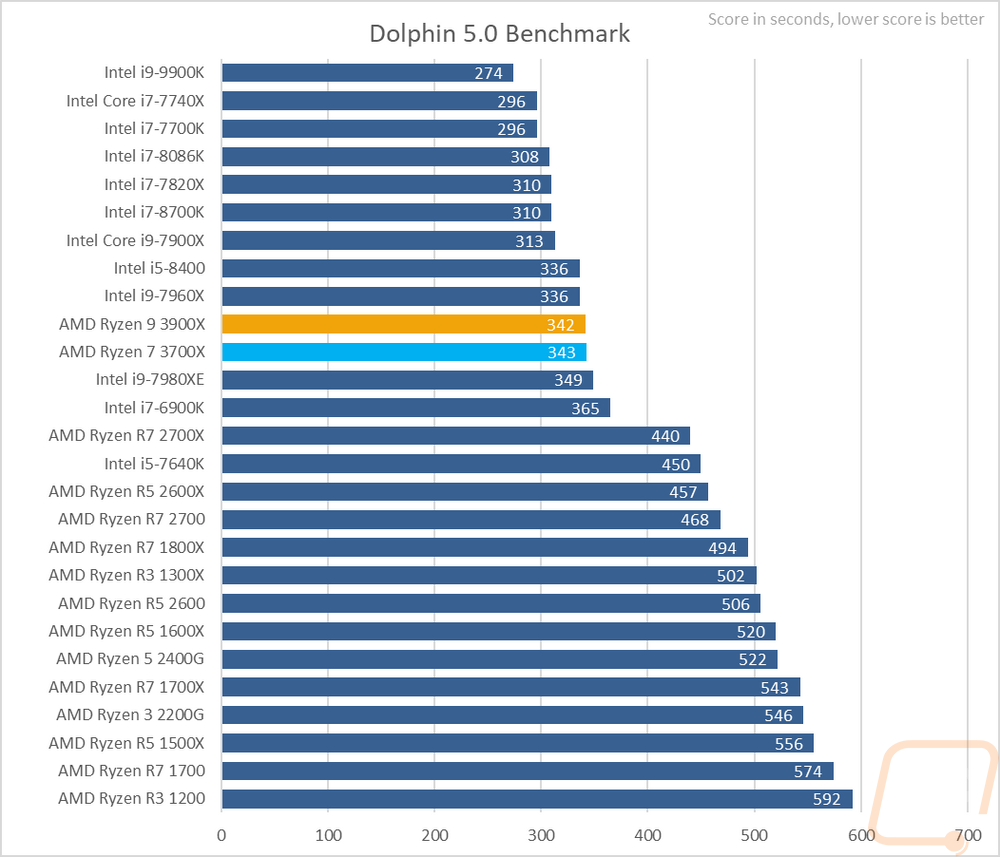 Before jumping into real gaming performance I did want to check out how the two Zen 2 CPUs performed in 3DMark Fire Strike. Below I’m just looking at the physics score which mostly ignores the GPU all together and the 3900X did extremely well up at the top of the charts. The 3700X didn’t do as well but considering it is the 9900K and then the Core-X CPUs above it isn’t too bad, plus check out the jump from the 2700X to the 3700X. 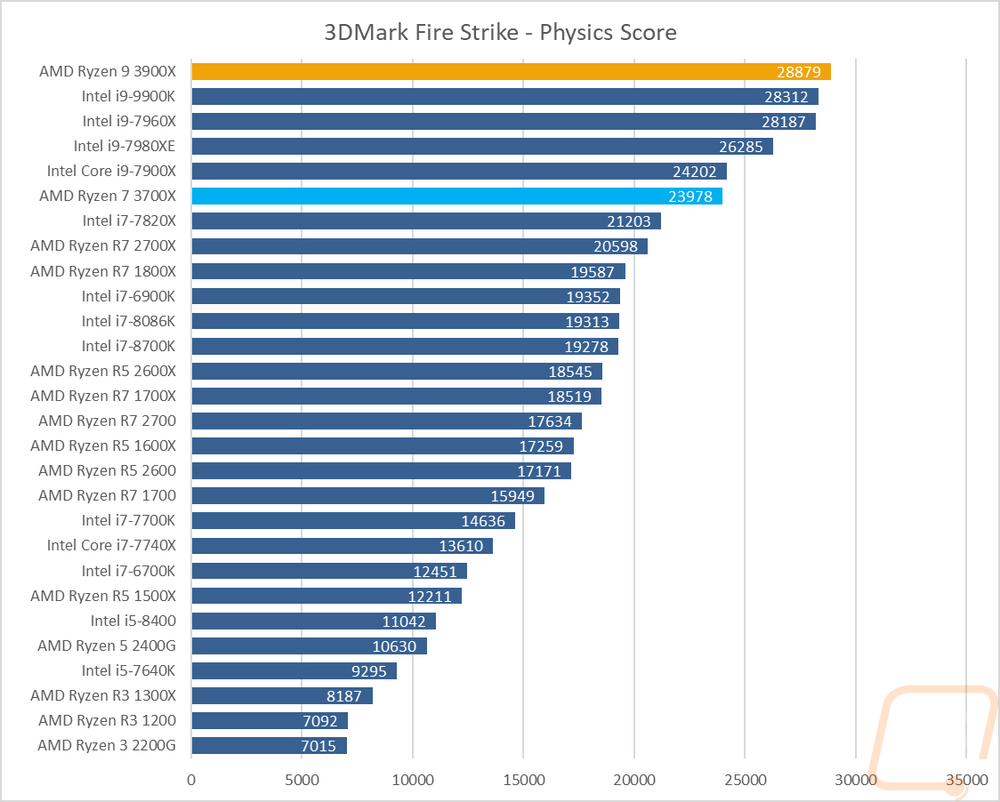 Then we have gaming performance. For this, we have the GTX 1080 Ti for the GPU and I’ve run through a few different CPU dependent games at mid-range specs. With Deus Ex being the one exception, both the 3900X and the 3700X saw a big jump in gaming performance in all of the games tested. TF2 is a great example of how Ryzen went from completely filling up the bottom half of the chart to being 2nd and 3rd. Of course in that test, the 9900K still dominates with its pure clock speed. Far Cry 5 and Shadow of a Tomb Raider are both new games which give you a good idea of about what you can expect overall. They are very improved but those 5GHz CPUs are still going to be the best for gaming. I don’t think that is a huge surprise but what is a surprise is that Ryzen is now actually not going to suffer when gaming like it used too. 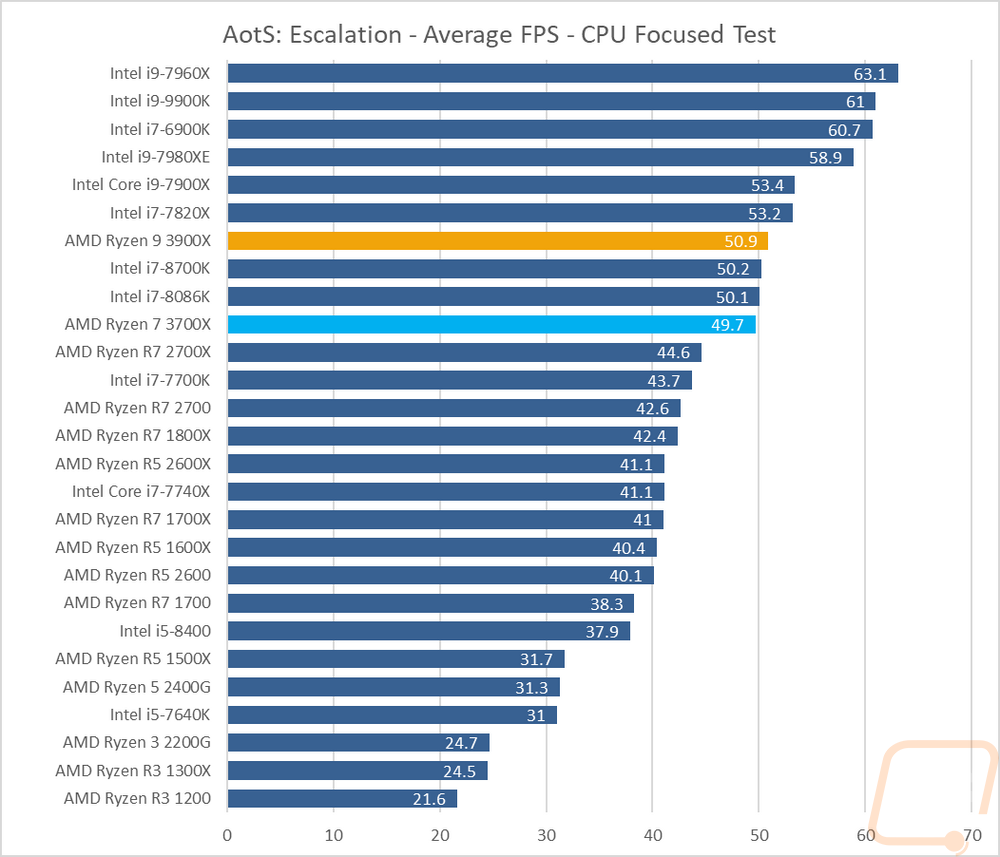 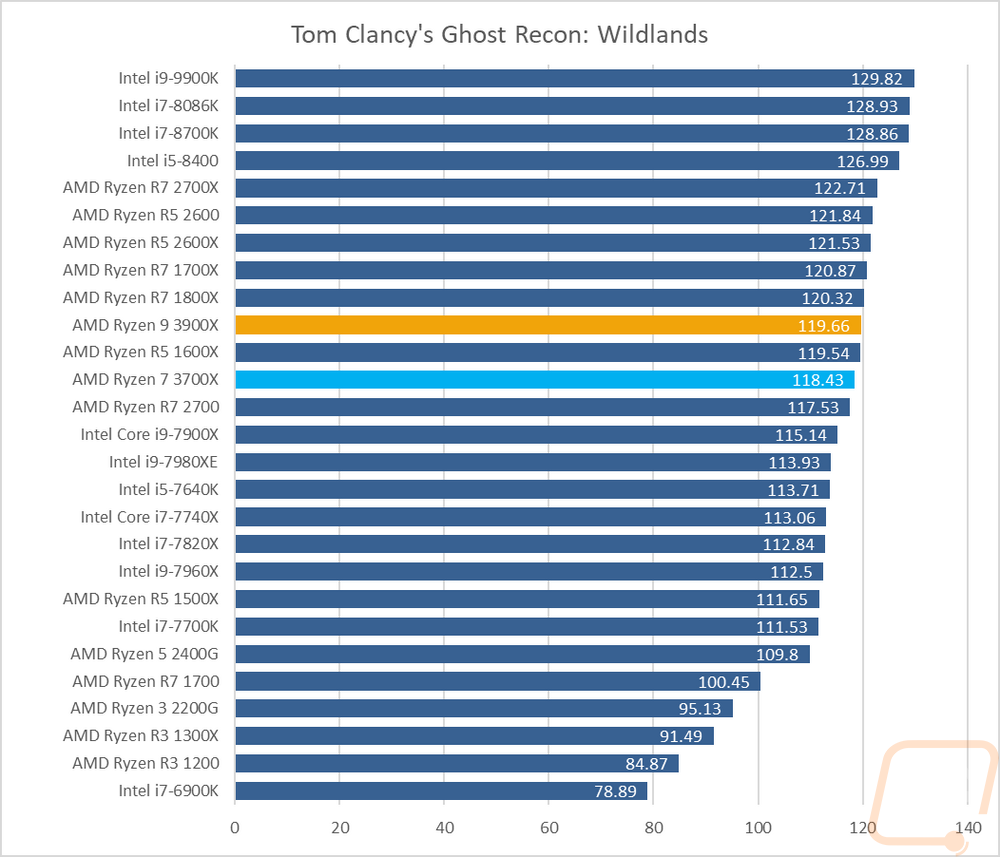 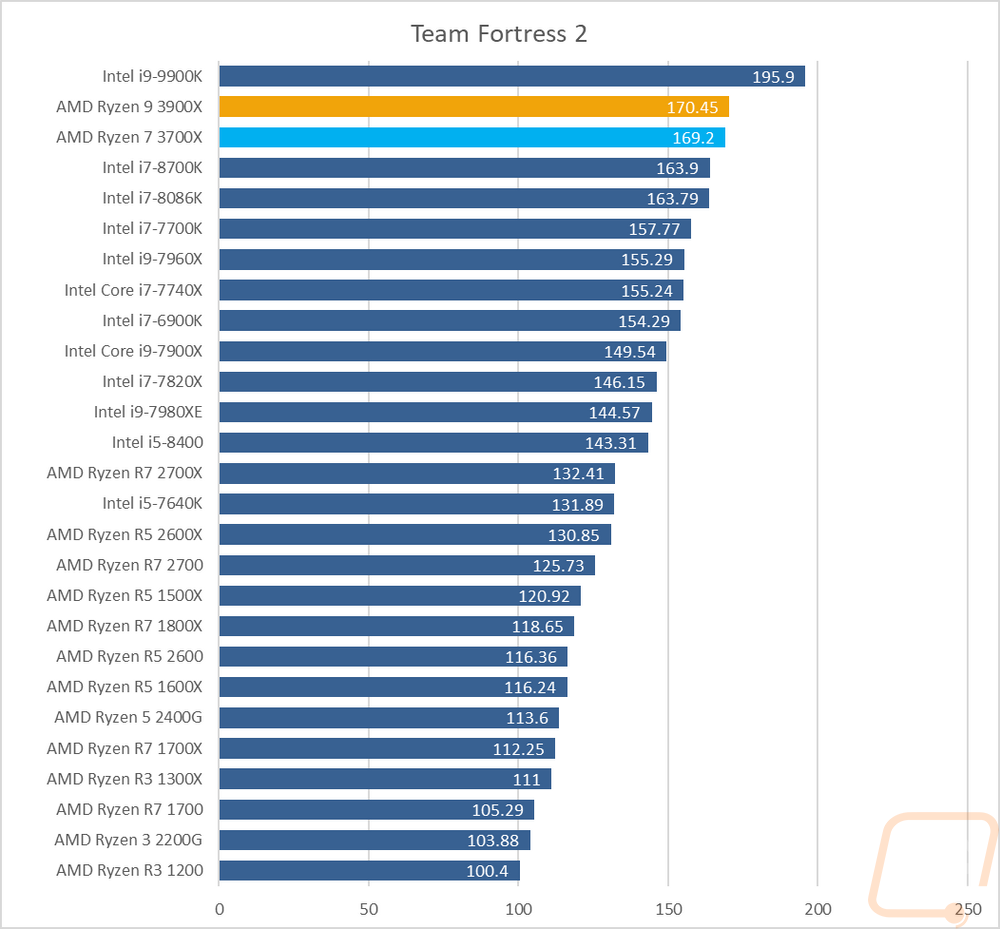 The last thing I wanted to take a look at were a few tests in AIDA64. Namely, with the cache improvements, I was curious how those compared to past Ryzen CPUs and the 9900K and the results were impressive. Latency is right there with Intel and the 3900X is way ahead of the 9900K in all of the Cache tests with the 3700X just a touch behind the 9900K in the same tests. L3 cache is especially impressive with the 3700X doubling the 9900K and the 3900X tripling it and some. Memory read speeds were impressive, just like past Ryzen CPUs and the memory latency has dropped but not any lower than what the 2000 series Ryzen did, there is still a little room to get memory latency down with Intel. That Memory write speed on the 3700X was interesting but after talking to AMD about it it is as expected. The CCD/IOD link is 32B/cycle for read performance but 16B/cycle for writing allowing them to save power. Given that write, performance is a lot less important it was a tradeoff which as you can see from all of the other benchmarks, paid off. Then down on the last section, the FLOPS numbers show basically what we saw in the benchmarks, the 3900X is just behind the 7980XE and 7960X with the 9900K three hundred behind it. AES-256 performance was vastly improved (remember me mentioning that was a big area which was improved in Zen 2 architecture) so much that the 3900X was the first to 6 digits and was twice as fast as the 9900K. Integer IOPS still have the 9900K out ahead as well as the Core-X CPUs. 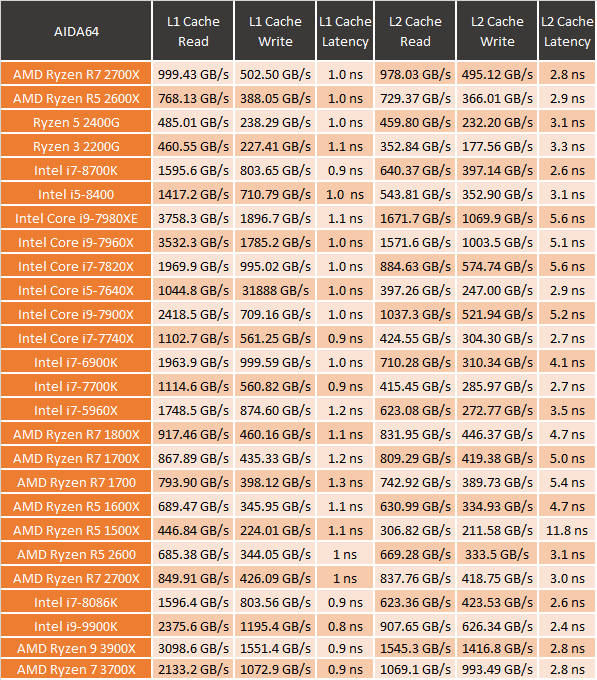 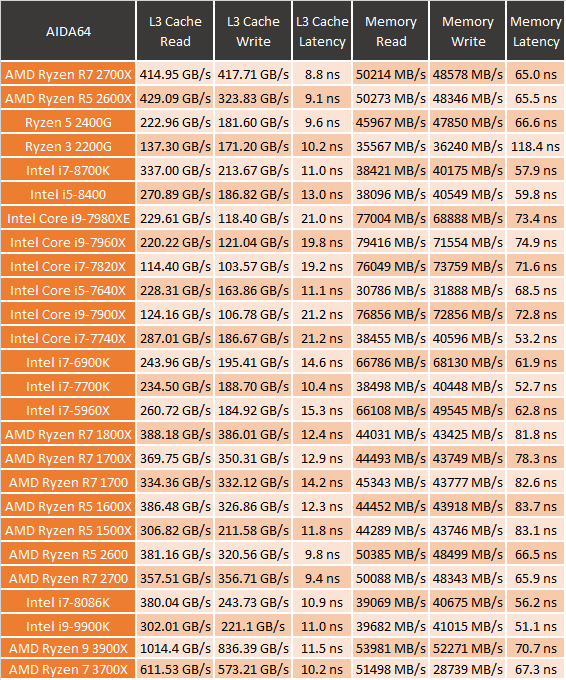 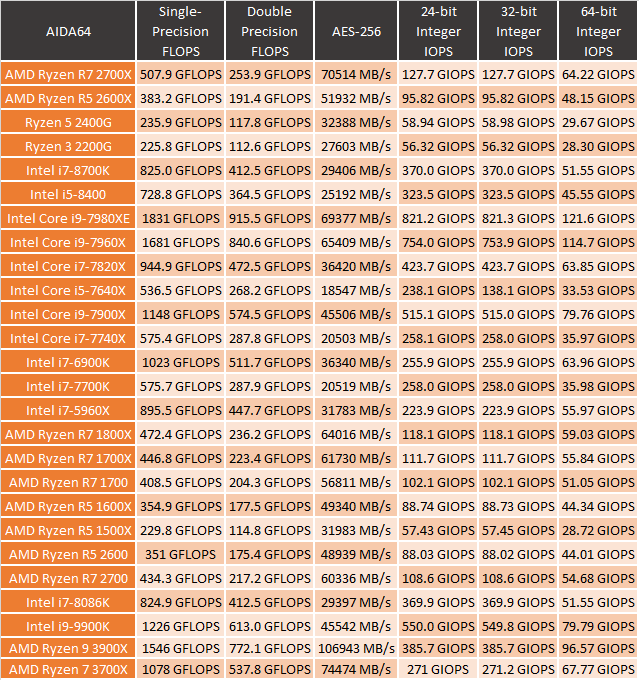