So with Phanteks, they just had the one cooler that could fit in an ITX build and it is on the larger side of what I’m looking at today. At 74mm tall it isn’t too bad for height but it is a horizontal design. So they are able to fit more cooler in a shorter profile at the expense of the overall size. When you dig in you get a stack of instructions, AMD and Intel bags as well as a third bag with a tube of thermal paste, screws, and a hold down bracket. The cooler itself is the best-looking cooler out of all of the coolers tested. It is anodized black with a black and white 120mm fan on top. The fan is really high quality and Phanteks even went as far as putting cops over all six of the coolers heatpipes. 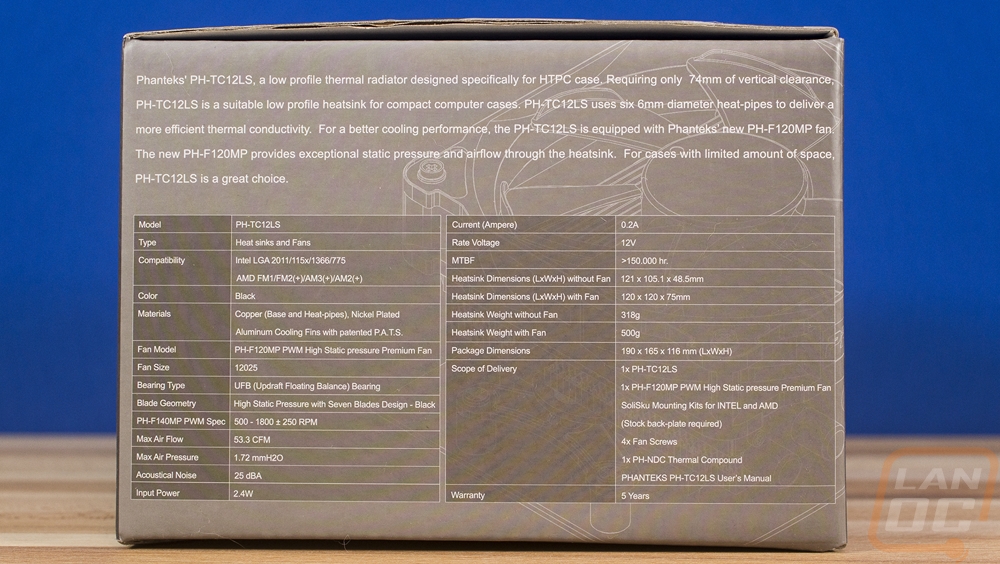 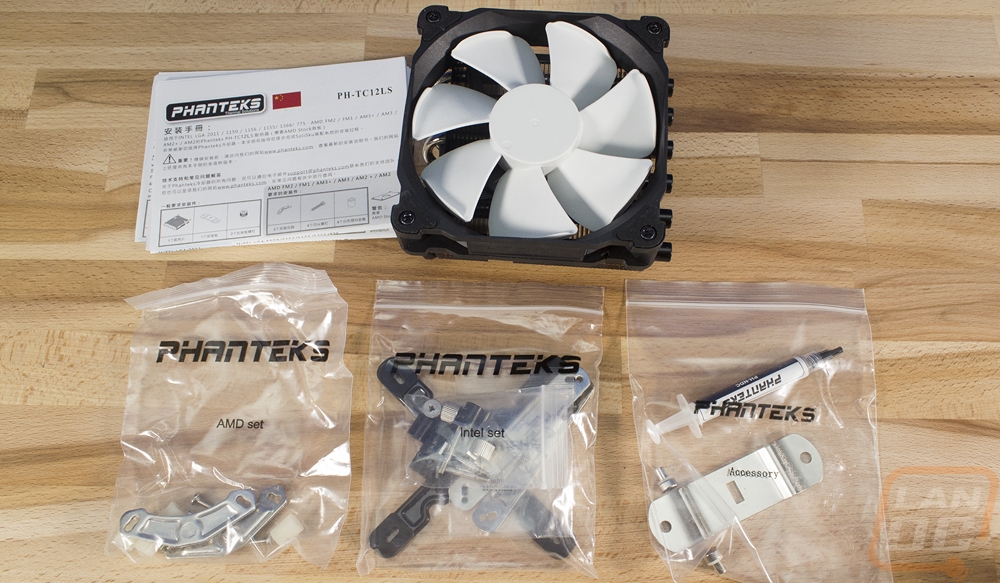 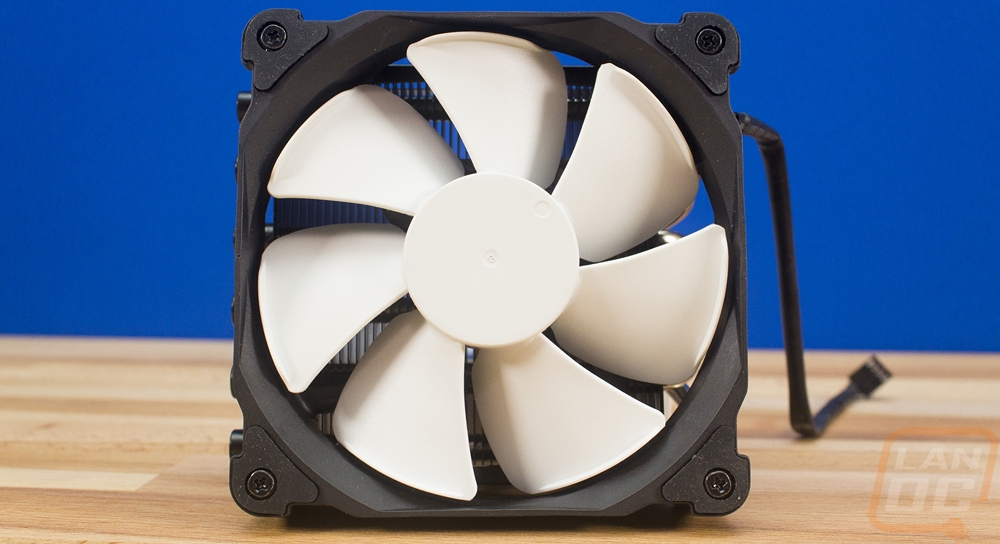 The heatpipes are the only chromed part of the cooler and you really aren’t going to see those when everything is installed. Six is a crazy number of heatpipes though. The surface is also extremely smooth. Check out the reflection in the photo below. 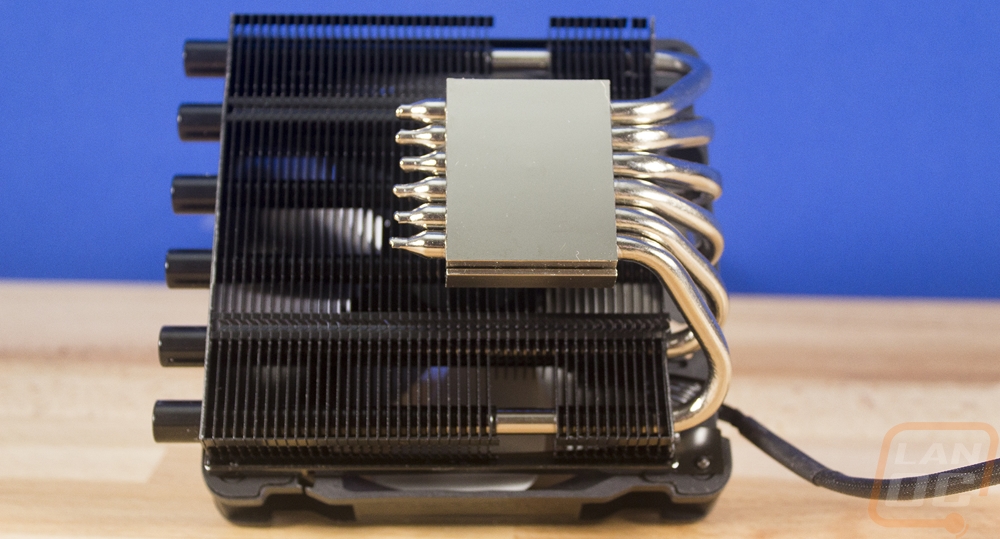 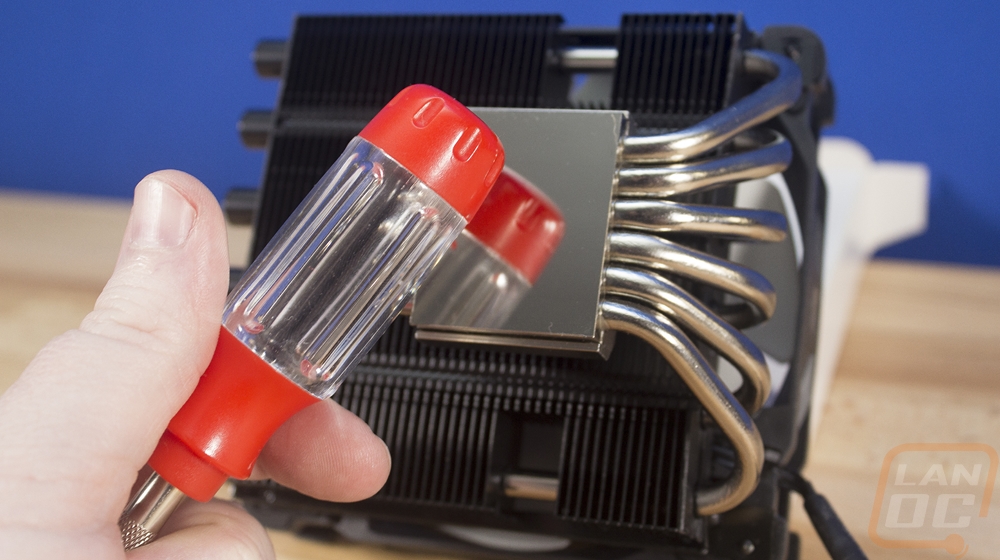 As for installing the PH-TC12LS, my first installation was out in the open for the photos below. Even in this situation, I was surprised at how difficult it was to get installed. This one is similar to the Noctua kits in the base bracket design. You use the stock AMD backplate, use plastic spacers to raise the mounting points up, then screw down the two brackets. From there you use thermal paste and then install the bracket right? Well yeah, but this is where things became difficult. The hold down bracket doesn’t attach to the heatsink, it is only held in place with pressure and a cutout that lines up with a key on the top of the block. So this moves around, then on top of that, the mounting screws also are loose. To make matters worse the fan has to be removed to get a screwdriver down into the screws. It can be done, but plan on fighting with it. Especially if you do it in your case.

Once installed we can see just how it all clears the Gigabyte board. Depending on how you mount the cooler you can cover up the rear I/O area or your memory. This means you have to pick between making the oddly placed 8-pin on the Gigabyte board harder to get at or cover your memory. If you have shorter memory covering them would be the better option anyhow for the cooling. At 74mm tall installed this cooler is a little taller than the AMD Spire and shorter than the MAX so height shouldn’t be an issue. I was able to plug the 8-pin in with the heatsink pre-installed but depending on your case it could be even harder.