When doing my research looking for popular ITX coolers ID Cooling came up. I had seen them before but it wasn’t someone who we had covered in the past. Most of their coolers had AM4 support right out of the box and they even had a small cooler that was similar to the Cryorig C7 and the Noctua L9a. I reached out about what we were looking to do and surprisingly they got back with me quickly and sent out three different coolers to test.

The first cooler is the IS-40 v3. This isn’t even the smallest cooler that ID Cooling makes. They actually had a whole range of tiny coolers, but this specific cooler was really popular on Reddit and Forums as a recommendation in the Cryorig C7 and Noctua L9a range. At 47mm this is the same height as the C7 but the L9a is still smaller. They ship it in a simple box with just a photo of the cooler and an orange strip around the bottom. Inside you get one small instruction paper and a bag with both AM3 and AM4 brackets and a tiny tube of thermal paste. 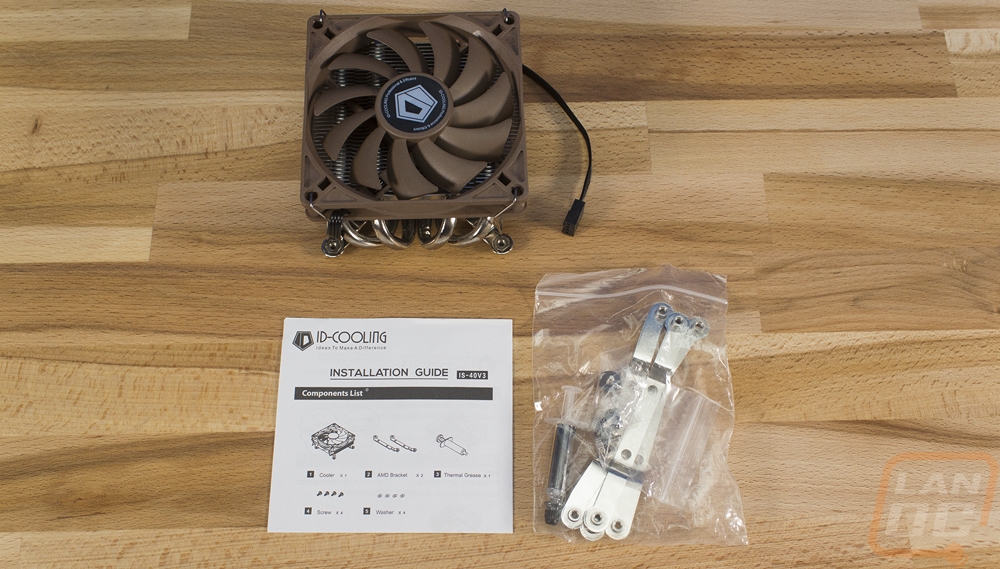 The cooler uses a thin 92mm fan in ID Cooling's signature off brown color. It blows down over the heatsink. Unlike the other two ultra low profile coolers, the heatsink design does actually get thinner as you go down, I’m surprised they didn’t take advantage of the extra space. They use four direct contact heatpipes running from your CPU up and around to pull the heat up into the heatsink. Then on the bottom, the brackets can be swapped out using four small screws. That fan color is going to take some time to get used to, just like Noctua, but I do like that they at least use a thin flexible black cord. 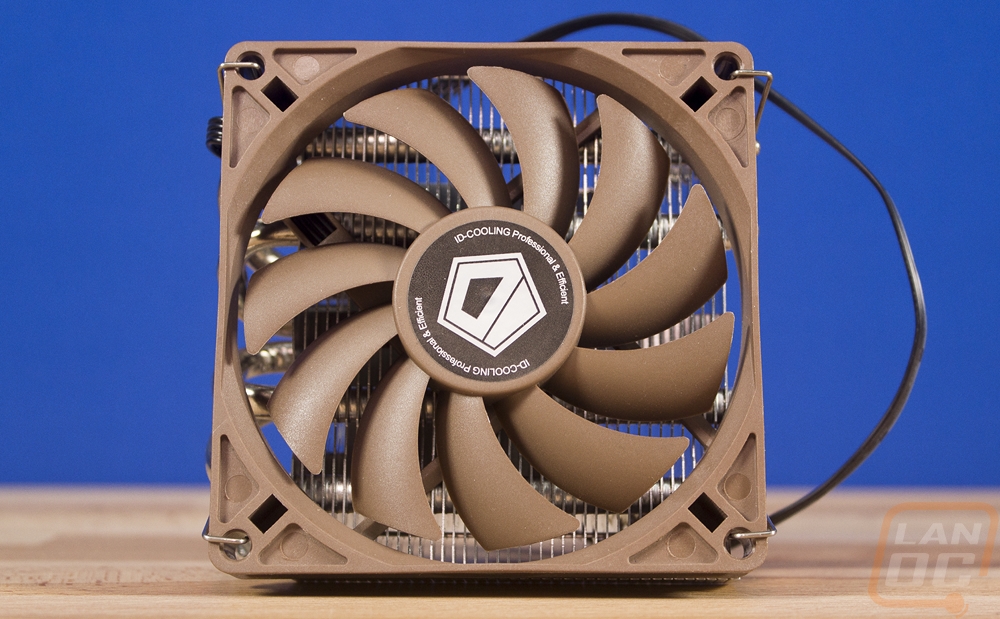 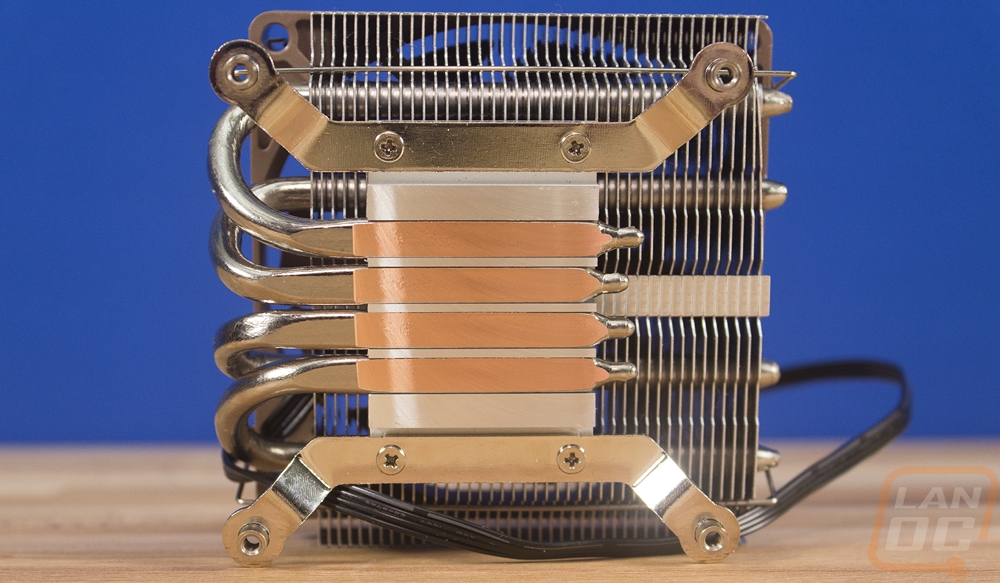 When installed the IS-40 v3 clears the memory completely so tall memory isn’t an issue. Being just 47mm tall it barely sticks up over the rear I/O and memory anyhow. 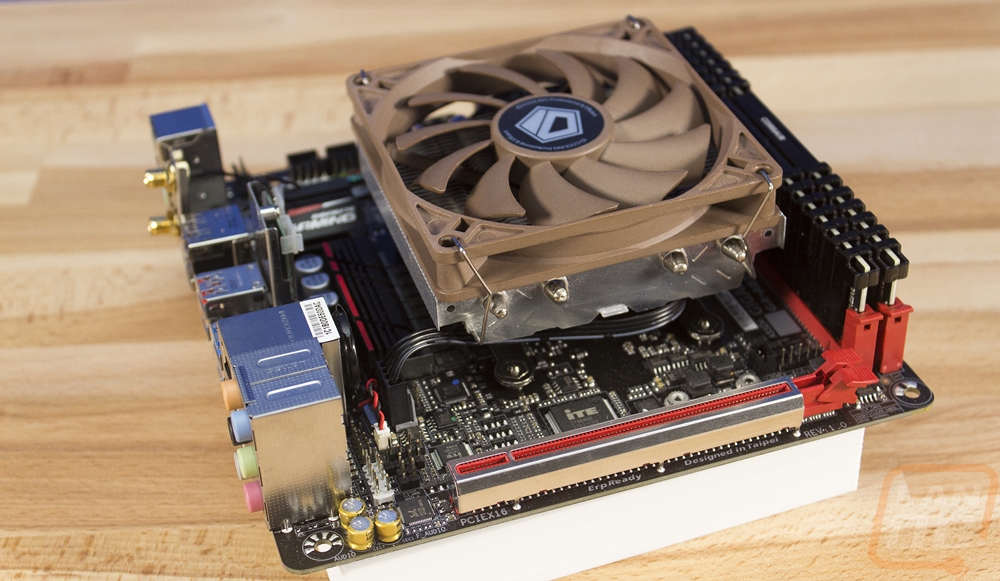 Next, we have the IS-50. This one has the same black box with an orange strip only this time they just used a line drawing not a picture of the cooler. The box on this one took a bit of a beating as well but the cooler came in just fine. Inside you get the cooler, the same small instruction paper, AM4 and AM3 brackets, and the tiny tube of thermal paste. 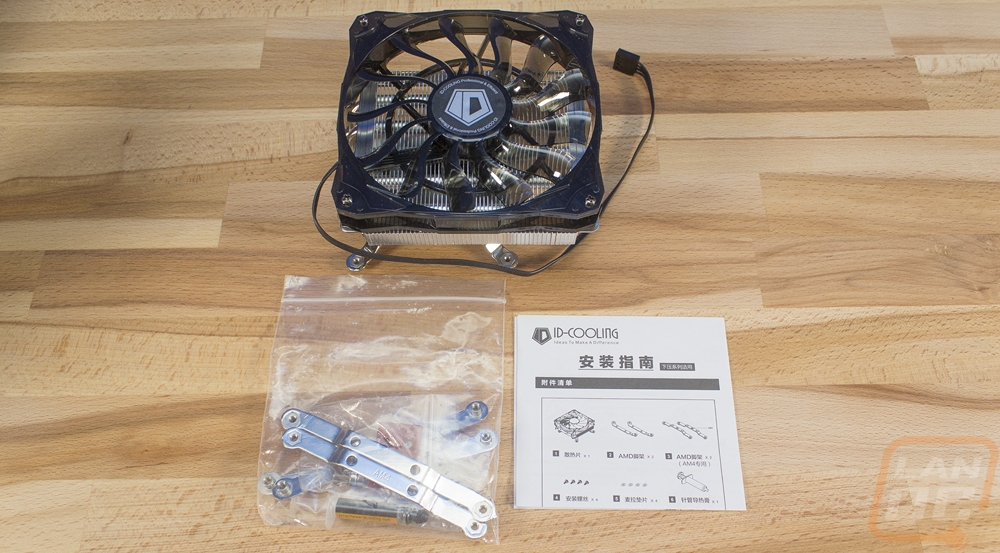 This cooler is a departure from the design of the IS-40 v3. This is still a top down blowing design but for this one ID Cooling stepped up the size of the fan from 92 to 120mm. With that, they expanded the size of the heatsink as well but oddly enough the thickness of the cooling fins is about the same as the IS-40, only this time there is a big gap between the cooling fins and the heatblock. There is once again direct contact heatpipes on the CPU contact surface but for this cooler, they went with 5. The cooler itself came in a little bent from the side profile, I will have to fix that later will a light pull. For overall thickness this cooler comes in at 57mm, the fan isn’t much thicker, most of this is from that air gap in the middle. The fan is also a new design as well, dropping that weird ID Cooling brown for a glossy black finish that people should like more. 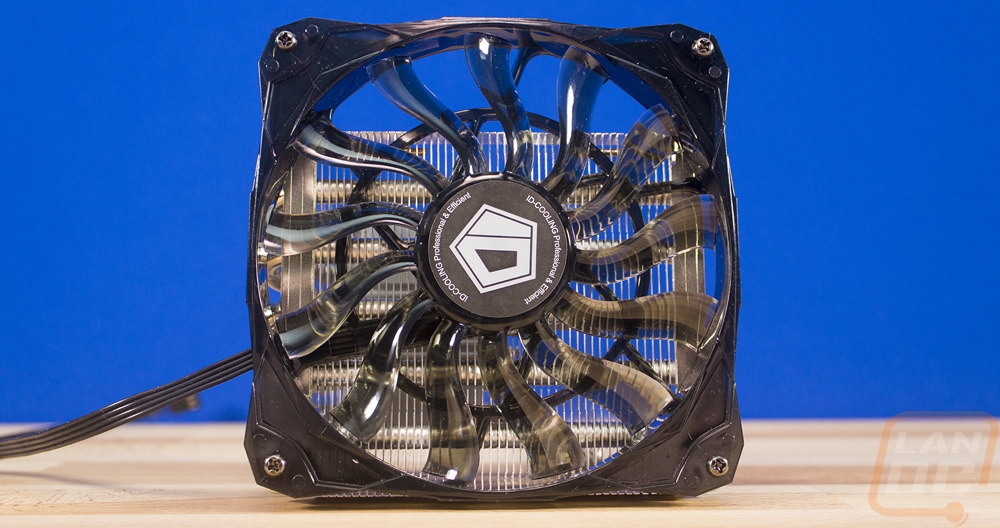 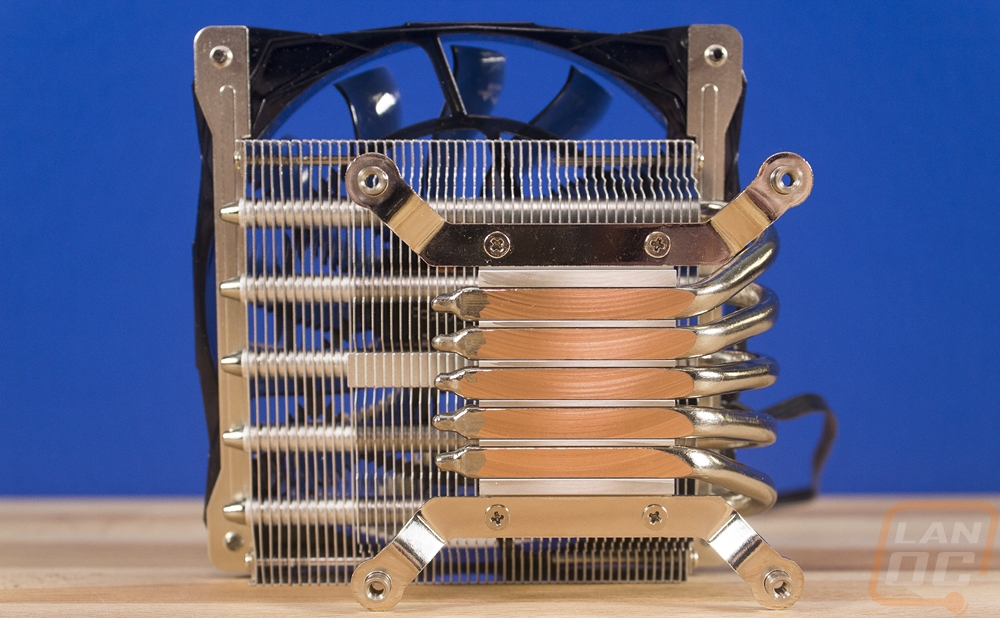 When installed this design does reach up over the memory and it does prevent you from using tall memory sticks. In fact, if you need to get to your memory at all you will have to remove the cooler. This design blows down on to the memory though so they should run cooler. From the top down view, you can also see just how much of the board is covered up by this design. The fan is larger than the heatsink but it even overhangs past the memory so ultra small cases that aren’t wider than the ITX board aren’t going to fit this one. 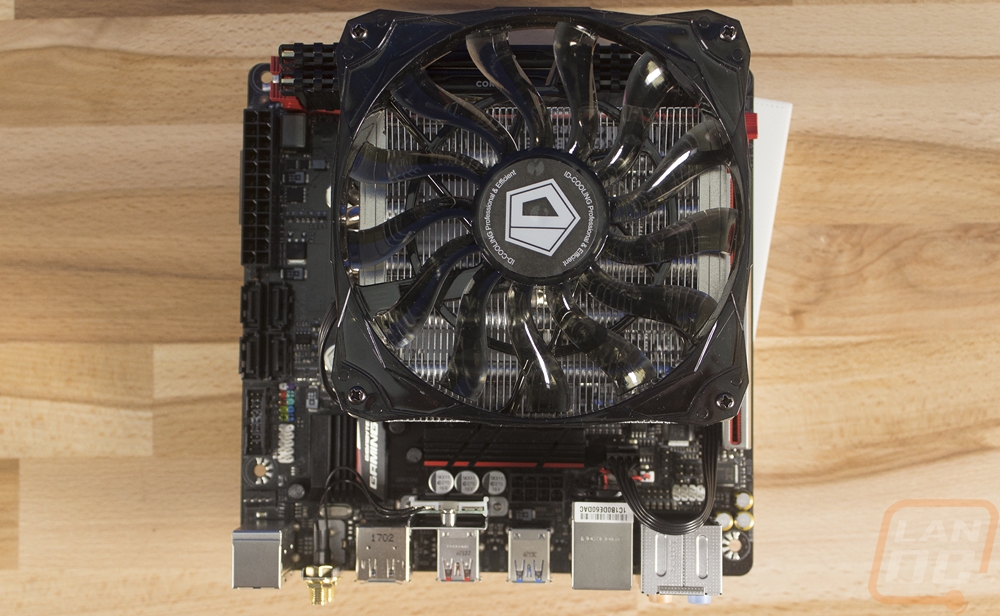 The last cooler they sent was the IS-60, another low profile cooler. This time the box didn’t have a picture or a drawing just a white panel with the product information on it along with the black and orange from before. The picture of what was inside looked just like the IS-50 really. You get a similar looking cooler, the same basic instruction page, AM3 and AM4 brackets with the Intel brackets pre-installed on the cooler, and then a tiny tube of thermal paste. 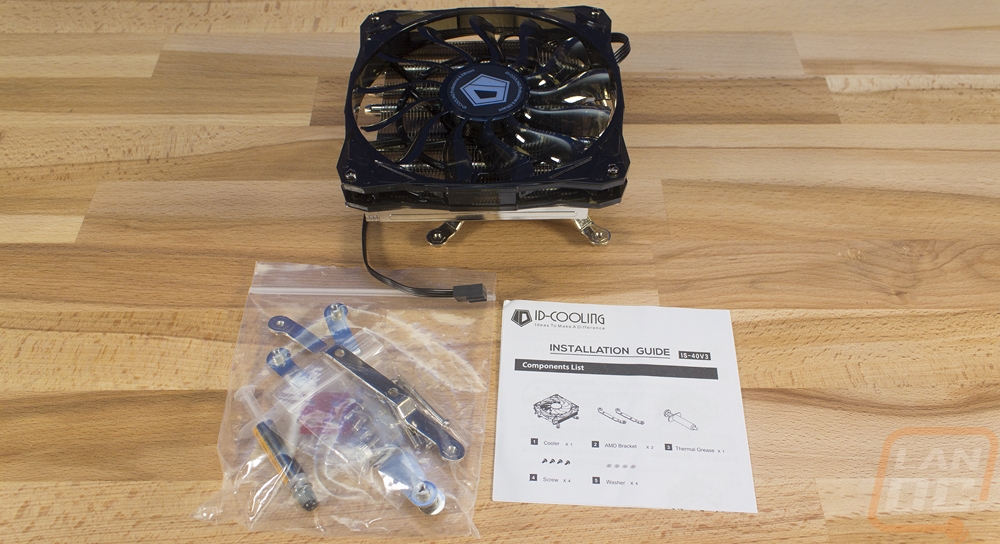 The cooler itself actually looks a lot like the IS-50 but there are a few key differences. So they have the same 120mm fan on top but this cooler is as wide as the fan to better take advantage of the airflow. This means it also doesn’t work with extra tall ram. Then they bumped the heatpipe count up to 6 from 5 and they went away from the direct contact design for a mirror like finish. The space between the main heatsink and the CPU block is also filled with a smaller cast aluminum heatsink to use every bit of the space. The fit is really tight though, even on the Gigabyte board that goes way out of its way to push the two ram slots all the way to the edge of the board for better cooler compatibility, but as you can see from the pictures below it does work. 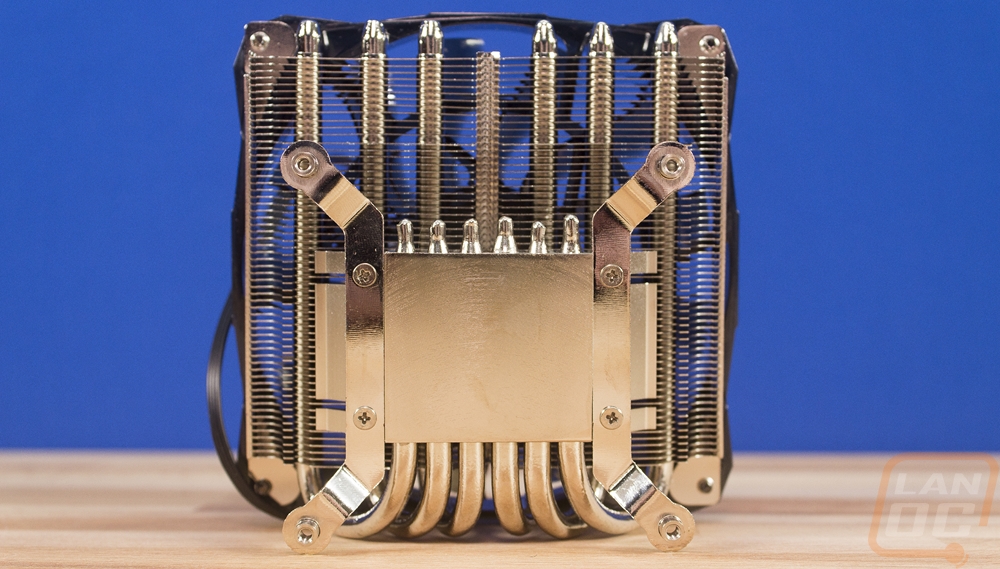 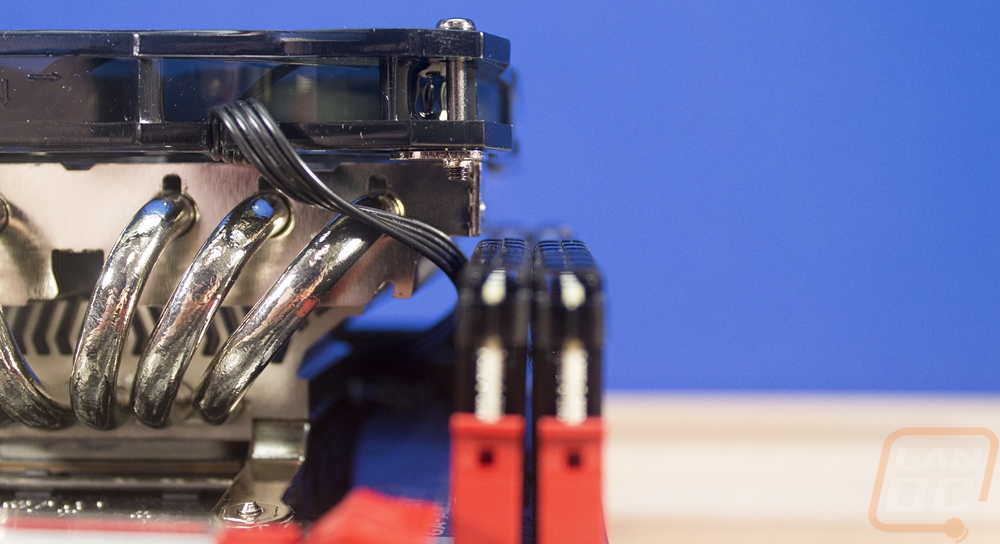 Installing the three ID Cooling coolers was basically the same for each. They all use the same mounting brackets with just the 40v3 having different mounting bolts. They do ship with the Intel brackets so you will have to swap those out. I also did have one of the three missing one of the two AMD brackets. The brackets attached from the bottom to the heatsink with four screws total. The brackets have standoffs built in so they run through the holes in your motherboard and then from the back you install the four bolts. They don’t use a backplate and I’m not a big fan of that because of the pressure it puts on your board and because you risk scratching up the PCB from the bottom.

We have 1306 guests and no members online