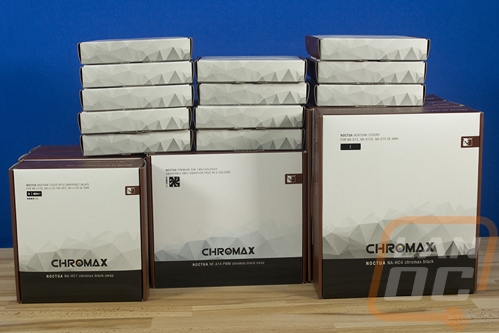 Let's be honest, both some of the best heatsinks and fans are Noctua’s, especially when you are looking for low noise output. The problem is they have been very stuck on their brown and tan color scheme. The benefit is that when you see them you know exactly what it is and you know it is a quality product. They ignored the clear and glowing transparent fan fad that came and went but with cases and other hardware sticking with black they resisted changing to it. A few years ago they did bring out their Industrial PPC fans that were black but they were much more expensive and even though they are great fans a lot of people have looked other directions when swapping out their fans. Well a while back Noctua expanded their Chromax lineup with a new line of fans, new cables, and covers for most of their heatsinks that help give people color options for trim and finally fans and coolers that won’t stand out like a sore thumb while still giving people Noctua quality. I’ve had them in the office for a while and as I work on catching up I just recently got a chance to play with them when a build I put together just wasn’t going with the Noctua cooler that I put in it. 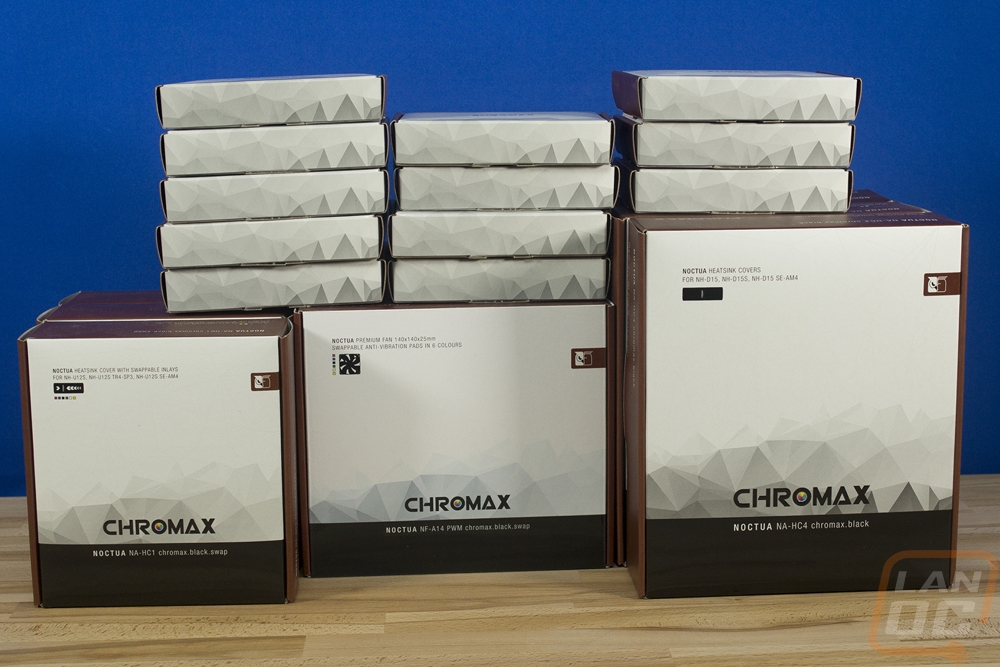 So with the original Chromax lineup from Noctua they just had rubber mounting pads and the pull through rubber mounts available in a few colors. But this time around they really went crazy with the Chromax theme and they even brought out new Chromaxed versions of the cables they introduced last year. This included their NA-SEC1 ran extensions and NA-SYC1 fan splitters. I took a look at the original versions of these last year when they first came out. Now though they have a touch of color added in.

So they both come in black, green, red, yellow, white, and blue. This matches the rest of the Noctua Chromax lineup over the years. Still no orange, but I will keep up the good fight there. These do cover most of the standard colors. The extension cables are 30 centimeters or just under 12 inches long. Thre is about an inch of heat shrink tubing on each end as well. Beyond that, they do have a Noctua label sticker in the middle that is a little distracting and that can be hard to take off. The sleeving itself has an almost waxy feel to it but with that I know it will pull through and fit anywhere you need it. 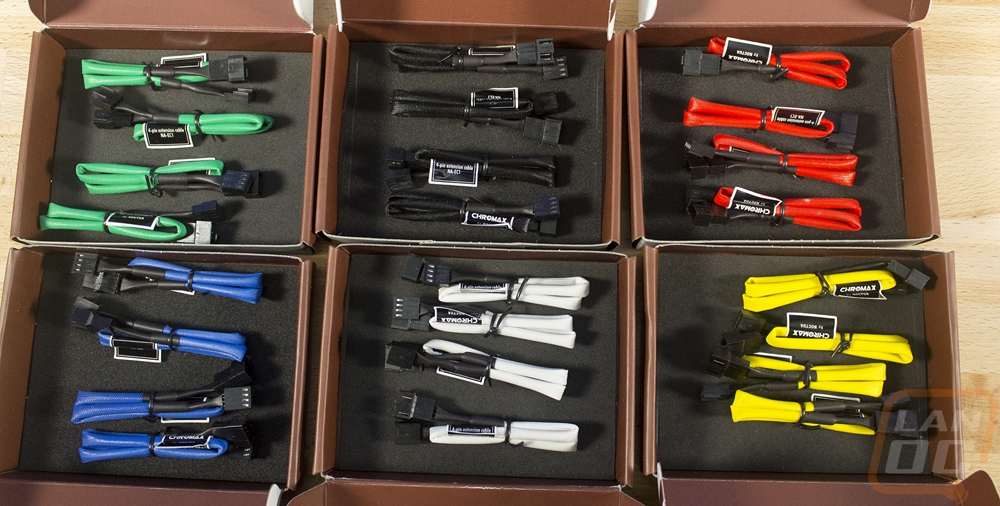 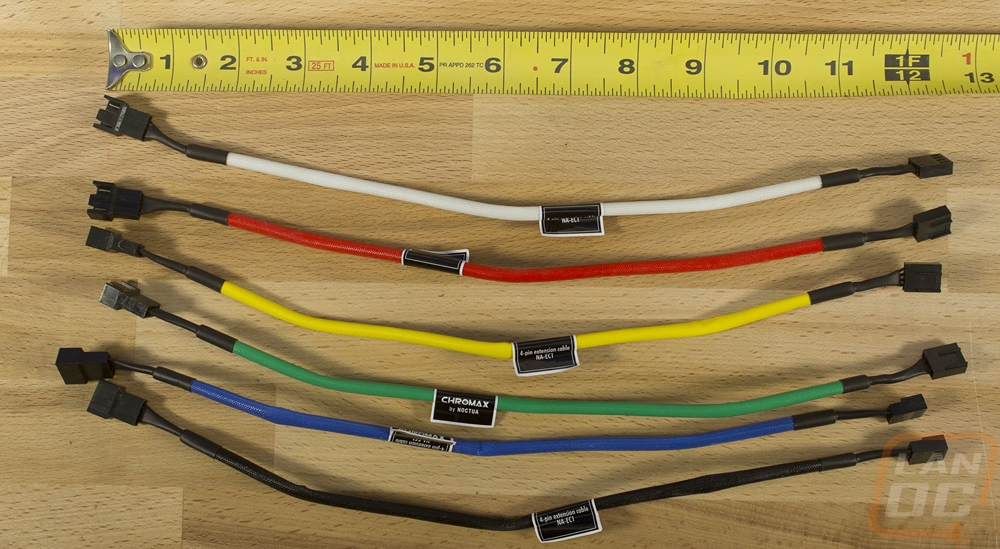 The Y splitters are also for four pin PWM fans but these are much shorter than the extension cables at just over 5 inches overall including the connections. The colored portion of the sleeving though is only about an inch and a half long. The long heat shrink tubing is especially noticeable here. In fact with both, because of the heat shrink tubing, I suspect a lot of builds you won’t even seen the Chromax colors when you have the cable coming out through a cable management hole and then being plugged in. A little tighter on the tubing could show off the colors more. Beyond that, these are just basic 1 to 2 splitters. You will have to fight to take the Noctua sticker off on these as well but they will do the job. I’ve been using the original all black splitter and cable on builds around the office. In the box you get three cables, this helps justify the overall cost a little because picking up a set of these on Amazon right now is going to run you about $9.90 with shipping. There is a markup for the Noctua name, but I think these will become important when you are trying to match all of your Chromax colors all together. 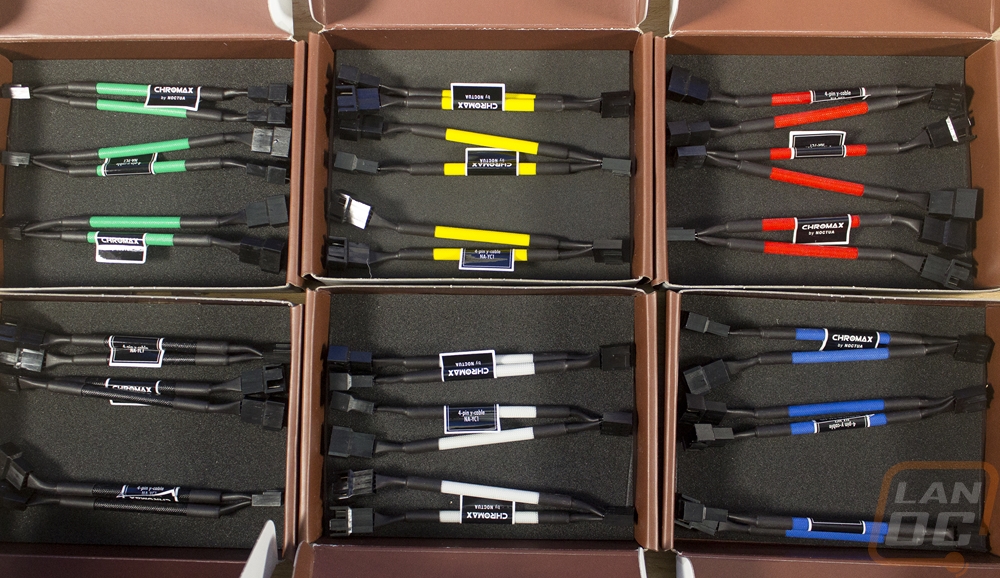 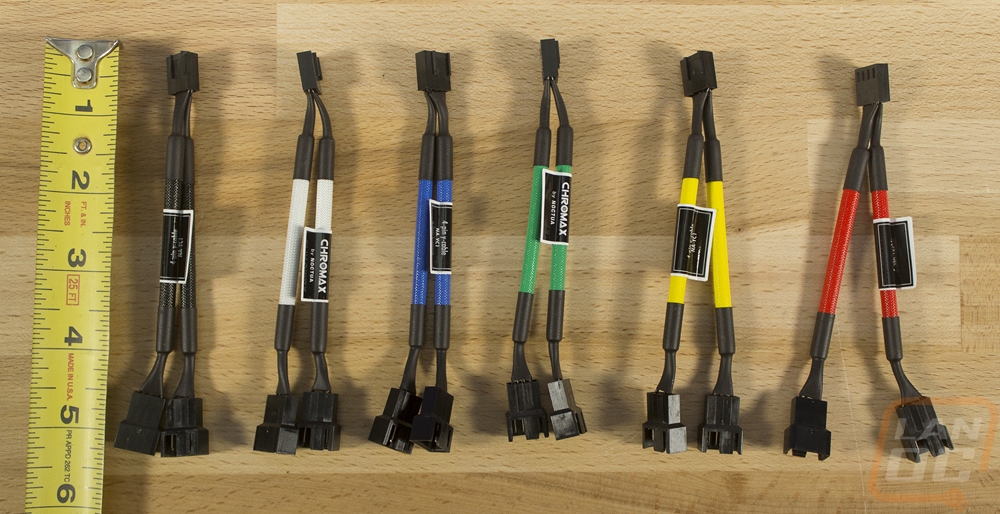 We have 1082 guests and one member online